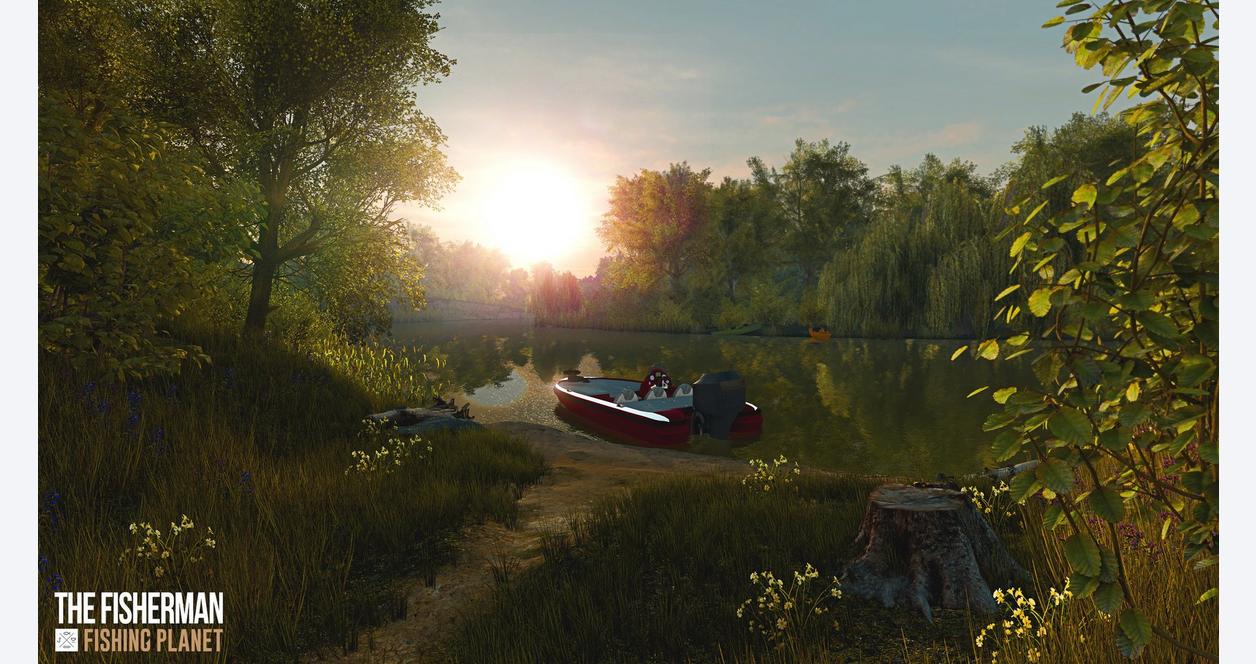 The Fisherman – Fishing Planet Is a game where you have two main things to do: Equip your tackle for certain types of fishing using a large number of tackle options — and I mean large — and then finding a place to fish. One of those things is way better and easier than the other, and I will explain this later in the things I liked and things I didn’t like.

First off, you create your own character by choosing from very limited options. Once you do that, you are immediately thrown into fishing off the shores of a river. You get a tutorial on how to fish, and the controls are just fine. You hold RT/R2 to cast, and then LT/L2 to strike and you then reel the fish in with RT/R2. Easy enough. However, those are just the basics. You can also control line tension, move your rod around and use different reel speeds to work on bringing in your catch. As the game moves forward and you are tasked with catching bigger and stronger fish, the game starts to get a lot more fun. As you go, it’s like a tier system for your gear in a way. You are tasked with upgrading all of your tackle that is needed to catch certain fish. You have to use in-game currency to buy these items, but you earn in-game currency by completing missions. Yes, there are missions.

Not that there is anything wrong with that, but the game tasks you with building a certain setup, then going to a location to catch fish that the game decides you should catch. Once you complete these tasks, you receive currency and unlock items to purchase. But you should hang on to that currency because the game will make you buy certain things. So spending it as soon as you get it is probably not a good idea. Another reason to watch your wallet is that it costs money to travel and to buy fishing licenses wherever you fish. There are two types of licenses, one is basic and the other is an unlimited license where no fish are off limits and you can fish at night.

In the beginning of the game, why you are still getting hints and tutorials, it teaches you about bait and what to use for different types of fish. And there is a ton of bait in the game. Once you get through all of that, the game opens up a bit, but it still holds your hand and tells you what you have to do before you can do any type of free fishing, and that takes a while. The more you progress, and the more money and coins you earn, the more things you can buy. This includes kayaks, bass boats and motorboats to get around. But if you don’t like a lot of hand holding, you may be frustrated with the game.

The gameplay is good. In fact, it can be really good. This is definitely a fishing simulation game, which means it seems realistic and there are really no arcade elements. This will probably turn off a lot of gamers who have enjoyed arcade-like fishing games in the past. For example, I wish they at least incorporated an underwater camera to be able to watch the fish fight. But that’s not what this game is going for and so I get it. They are going for a hardcore fishing simulation, and the developers pretty much did just that. So if you are a real-life fisherman, I think this game is for you.

As far as actual gameplay goes, it’s just really good. As mentioned above, the controls for the actual fishing are well done. Baits work like they are supposed to, and there are a huge number of them and other equipment to use. The game also does a great job with the physics of different casting, luring and techniques. Fighting fish is fun and realistic, having to worry about line tension, and the different ways to move your rod and reel also make sense.

There are also a large number of fish species to be caught. Specifically, I really enjoyed the bass fishing, and using a spinner and the stop-start technique to get a bite. And the bass fight hard, just like in real life. Overall, there isn’t too many negative things I can say about the gameplay. I’ve fished in real life plenty of times, and it feels like fishing.

Out on the lakes, rivers and ponds, the atmosphere is nice. It’s quiet and the birds are chirping. The graphics are definitely okay, but not outstanding. A really nice tool they give you is a chart based on the time of day when the fish are most likely to bite. This is done on a graph with slopes, the higher the slope corresponding with that time — thus the more bites you should be able to get. You also have the ability to fast forward the time on any given day so you can fish at the times the fish are most likely to bite.

In the menu while fishing, there is also a map of the locations on that particular body of water where you can choose to fish. So you can freely move around to any of them. So it’s nice to have a little variety in there. Overall, I’d say the presentation is well done in this game.

I’m not sure where to even start. I don’t like to be hyperbolic, but this game has one of the worst menu systems of any game I’ve seen in a long time. They are more or less a jumbled mess. The basics work fine, such as using the LB/L1 to move across the top of the menu to get into the sub-menus, but the problems start when you are trying to navigate how to set things up in your inventory. Sometimes A/X is select but sometimes it’s not. This is because as we dive deeper into sub-menus, such as when equipping tackle, you have to use the right stick to move through your items by using the D-pad to get to those items. It will say “select” and you would think that would equip the item, but it does not mean that.

So, for example, say I’m trying to equip a hook. There are multiple vertical lines of equipment you need to equip, first being your rod, then your reel, line, hook then bait, but by using the left stick it will sometimes just go right past the middle where you equip the tackle. Once it gives you the option to equip something to the highlighted area, it will say “select” with A/X but it does nothing. Somehow it will eventually decide to work, but there’s no real logic to it, and this is all done after a few minutes of actually figuring out how to get the hook slot highlighted in the first place.

I really hate to rag on this, and I’m sure after hours of playing the game you will learn how to navigate the menus better, but it’s just sloppy. After the first hour that I played the game, I started to pick it up a little more, but I’m still having trouble with some basic things. It can be very frustrating so keep this in mind. Hopefully, I’m the moron who just can’t figure it out, and it will be easier for other people.

I would normally put microtransactions in this category as well, but there really doesn’t seem to be a lot. There is a “Packs” category that will give you all kinds of different equipment, but there are only two out of the six available that cost real money, and those are both $4.99. The rest have to be purchased by in-game currency, the coins, which are much harder to come by than the actual money you make. I checked for 20 minutes to see if there is a way to buy these coins with real money, but I can’t seem to find it right now. Please let me know if I missed it.

This will be short and sweet, but I wanted to make everyone aware that I haven’t really encountered any bad gameplay bugs, However, I have had multiple crashes, and even one time my entire progress in the game was wiped out. It’s just something to be aware of but I don’t know what caused it to happen.

My overall experience with the game was positive. Once again, it is very simulation-oriented. If you are into fishing in real life, this game was made for you. If you enjoy fishing games but aren’t as hardcore as the guys on the water week to week, I think you will still like the game as well. But if you are looking for a simple fishing experience, this is not your game.

If it were not for the very hard to master menu system, this would be a game where I could say it’s fantastic. And while I don’t want to take too much away from the good gameplay and deep, deep experience you can have with this game, the menus can’t be overlooked since you will be in them quite a bit. Coming in at $39.99, I would say that’s a solid deal for a good, very realistic fishing game.

Let us know what you think about the game if you’ve played it.