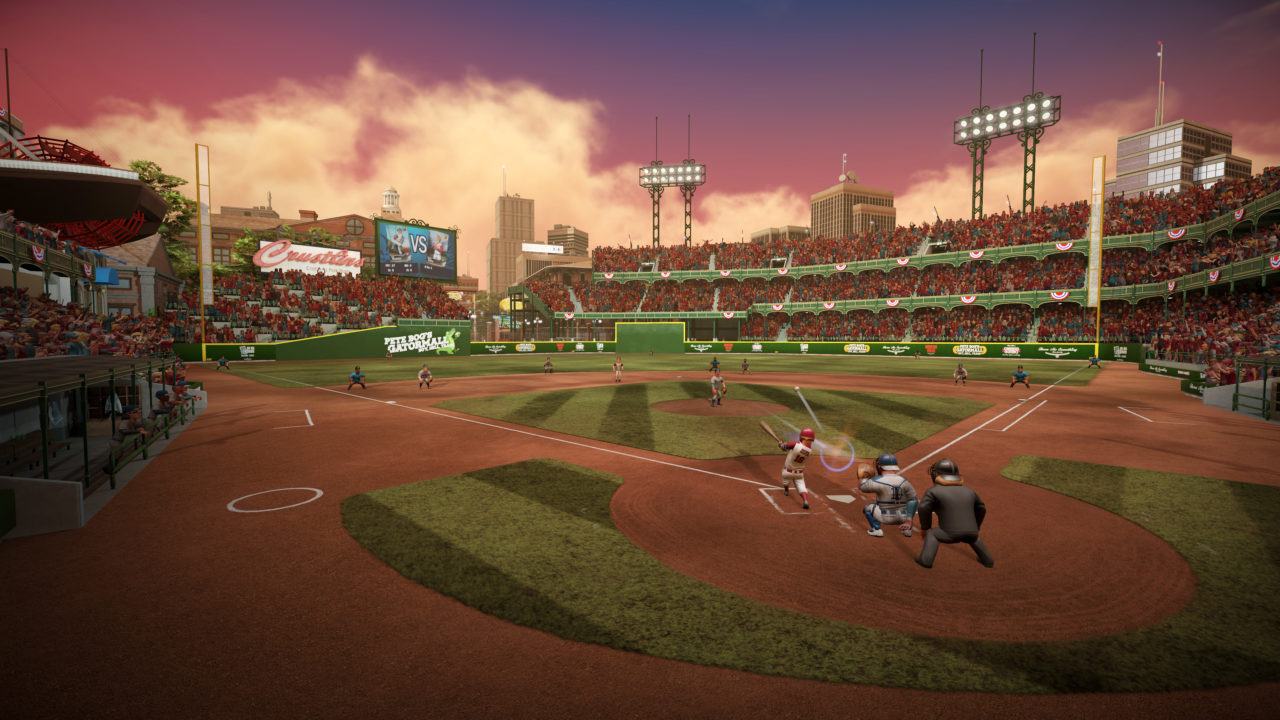 Metalhead Software is a small company that has put itself on the map with the Super Mega Baseball franchise. Now set to release the second sequel to their original hit back in 2014, they are no longer considered an underdog in the industry, but more of an innovator. With the release of Super Mega Baseball 3, fans are seeing the series that started in development over 10 years ago with Scott Drader (co-founder of Metalhead Software) turn into a full-blown sport’s offering that is moving from niche to mainstream. Is that a good thing? Let’s talk about it.

I have been addicted to the gameplay of the SMB franchise ever since it first hit back in 2014, and the developers at Metalhead Software have done nothing but find ways to make it better while also listening to community feedback about the gameplay itself. The newest version is no different as I could feel and see all the improvements that have been built into the third version of the franchise within minutes of taking the field. 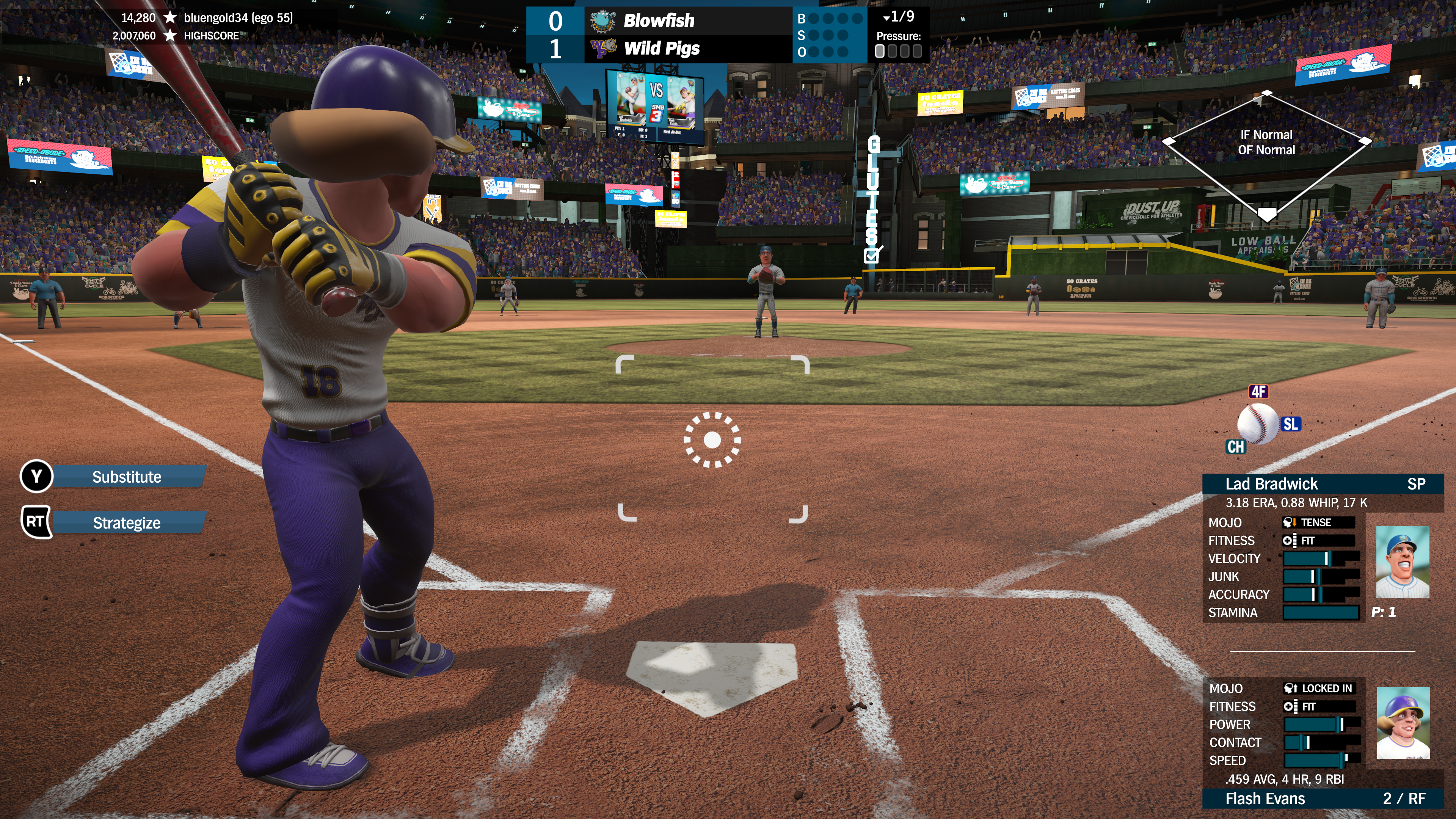 What takes the new on-field mechanics to another level with SMB 3 is simple for me to describe. The ability to now jump, dive and rob home runs while having timing and player ability factor into events is a huge leap. I have robbed home runs on a few occasions and it made me want to post a video instantly, but, ya know, I like not being blacklisted for posting content before I’m allowed to. That was the excitement level that it delivered because it requires a perfect blend of timing, player ability, ball distance and angle.

The same things go for the new fielding mechanics as now diving for a ball and leaping to snatch a heater down the down line all require the same ingredients. Because of that, it makes the accomplishment of doing these things that much more satisfying.

As much as the fielding has improved, do not think for a second that the batting and pitching have become routine and stale. Thanks to the new ego system, the difficulty has been ramped up but in a realistic fashion. The pitching and hitting mechanics feel the same as previous offerings, but now users will see the DH as an option and will notice certain pitchers being designated as long relievers/starters. 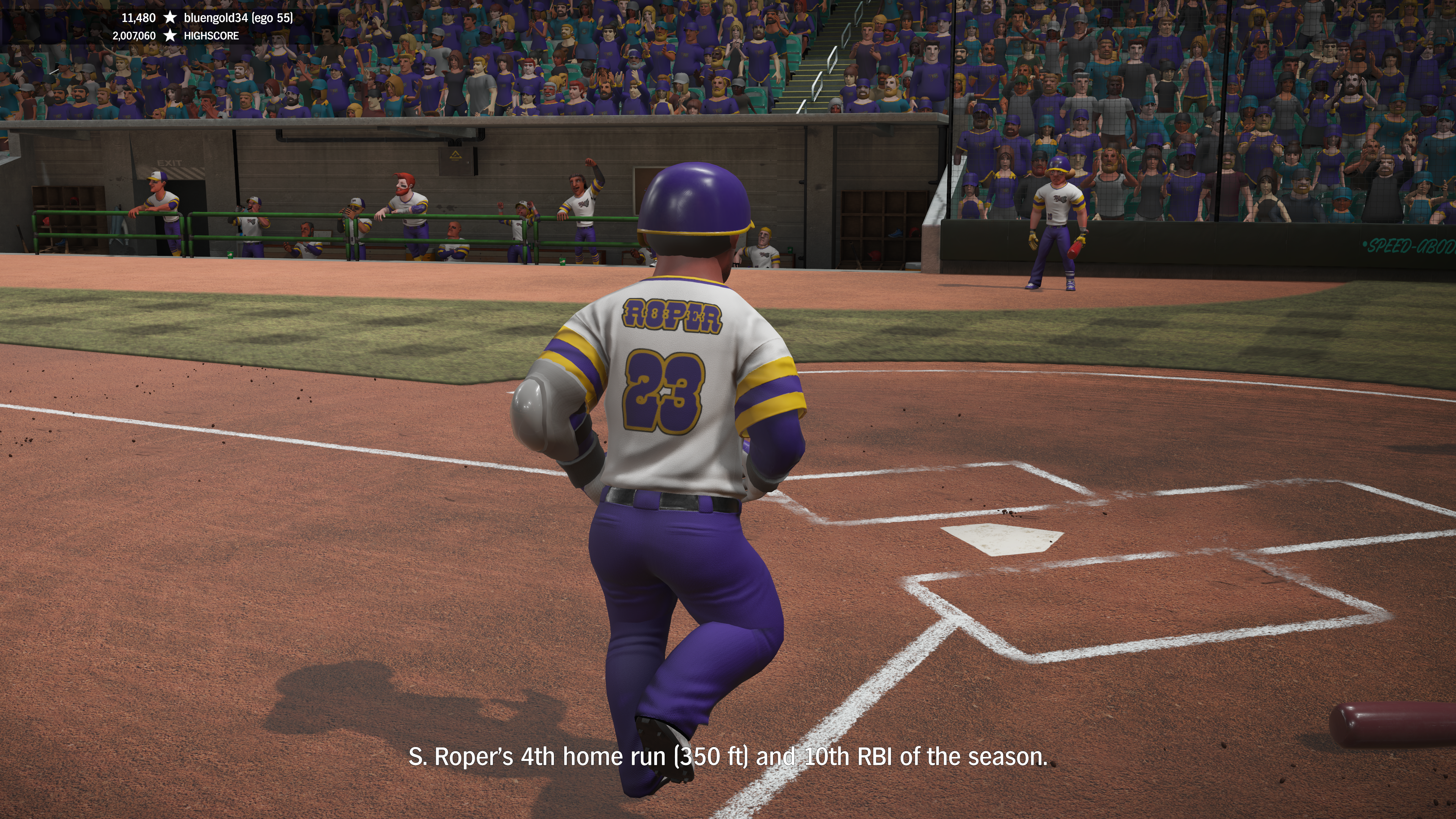 I could go on forever about how good Super Mega Baseball 3 feels responds on the field, but the new additions and refined gameplay help blur the lines between sim and arcade. Simply put, you should already feel confident in the gameplay here going into it, and the developers have done nothing to shake that confidence.

My fear with any new mode in a sports title relates to the depth of that addition. However, based on my experiences with this studio, my concerns were limited. After spending well over 20 hours in franchise mode, even my limited concerns were not warranted.

The new franchise mode in Super Mega Baseball 3 is exactly what I was hoping for, and a bit more. The mode allowed me to customize the franchise, let me run with the teams provided, or customize the whole league and roster set. 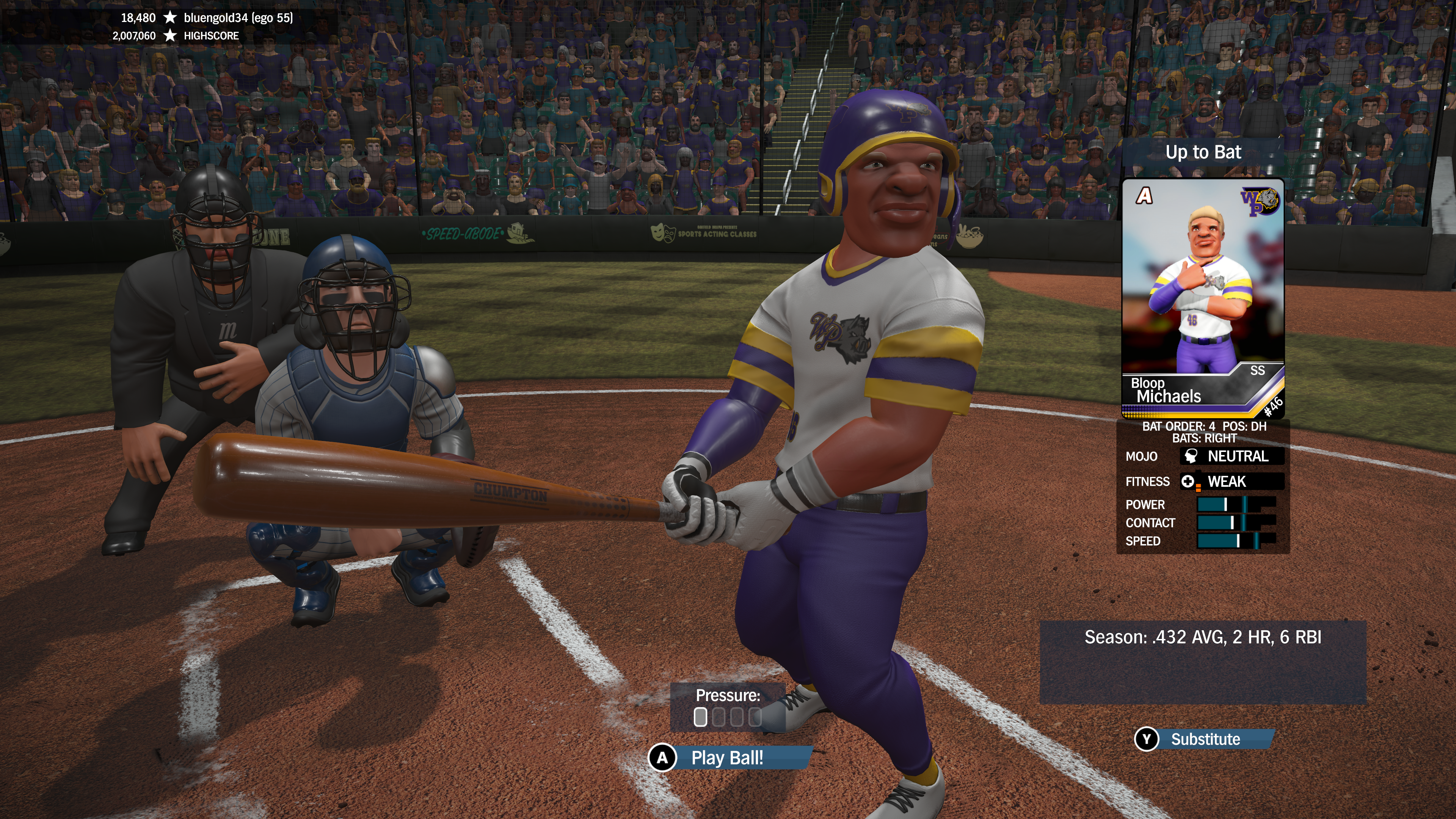 On top of a bevy of customization options, franchise mode also has quite a lot of stats. It was a lot of fun watching players on my team fight for the batting title, HR title and ERA title, but I also kept an eye on a lot of secondary stats that also matter over the career of a player.

Speaking of careers in franchise mode, the game takes a bit of a different approach when it comes to signing players and re-signing players. The game is built mostly around one-year deals, but the approach for each contract offer differs as the free agency period progresses.

Also, franchise mode tackles free agency and contracts, in addition to player progression. As a player ages, you will see certain attributes start to decline if they are getting older or increase if they are rising in the ranks as a younger newcomer. I was also able to help individual players stay around longer or reach their potential quicker by utilizing the game’s “training” option. 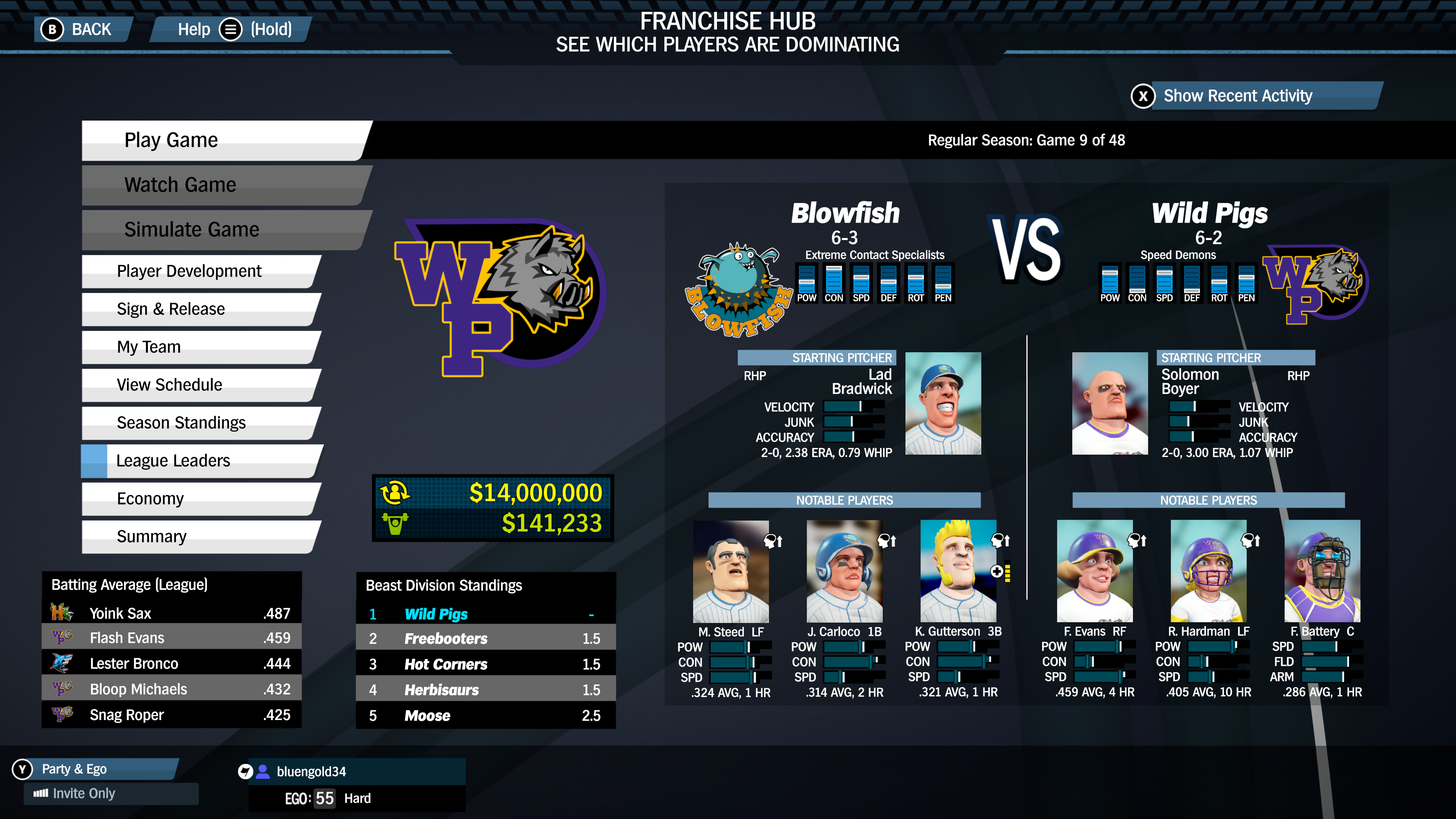 The training option allows you to purchase ability increases with a chance to decline in other areas (for some). It can be hit or miss in regard to how much the abilities increase, but the results are tangible and the ability to train is a lot of fun and feels very interactive. 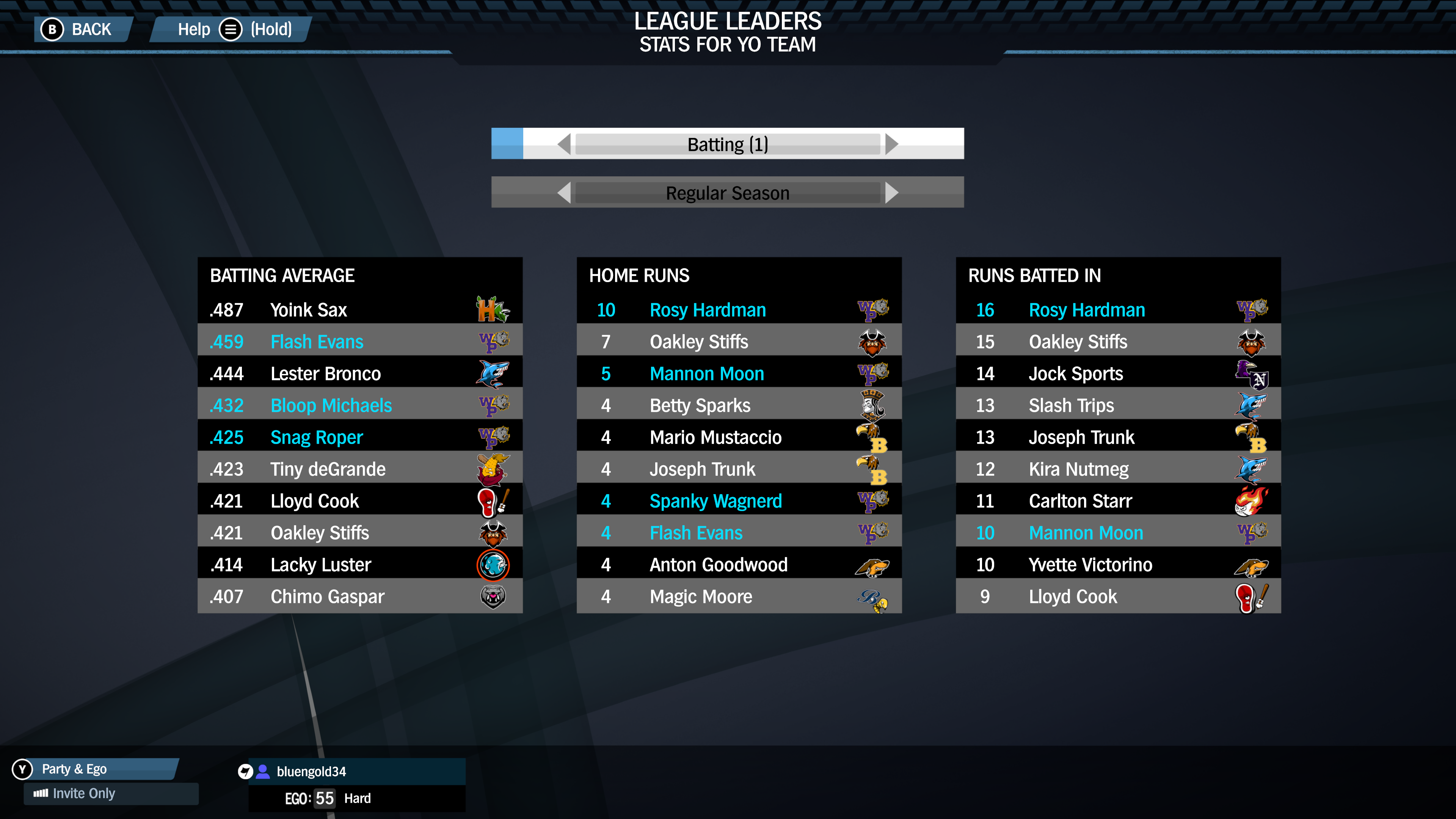 Franchise mode kept me busy for hours, and if not for this review, I would still be playing it. There is a lot of depth, a lot of options, and most importantly, a lot of fun to be had with the newly included franchise mode in SMB 3. I have a strong suspicion that the masses will love it every bit as much as I do.

What is online Pennant Chase, well here is what the developers have to say about it.

“Custom Pennant Race builds upon the existing Pennant Race mode by allowing players to organize a private cross-platform Pennant Race and invite their friends to participate (up to 32 total players). The mode features customizable settings and rules suitable for casual or competitive play. Customizable settings include innings per game and usage of the designated hitter. For competitive league-style play against friends, there are also optional locked Ego settings and a way to limit matchups to achieve a round-robin format. This all comes with the win/loss and stat tracking that the existing Pennant Race mode already has.”

So if you weren’t familiar with what this mode is, now you are. Not only am I a massive fan of this, but the fact this it’s cross-platform enabled opens up a world of possibilities when you want to move beyond the single-player option. I can’t wait until this is in the game, and I think it’s going to be an important way SMB 3 stays fresh through the summer.

The developers know the community wants a full-blown replay system and have mentioned trying to get it into a future edition. That’s all well and good, but we are on the third iteration and even the simplest of replay systems is yet to be introduced. 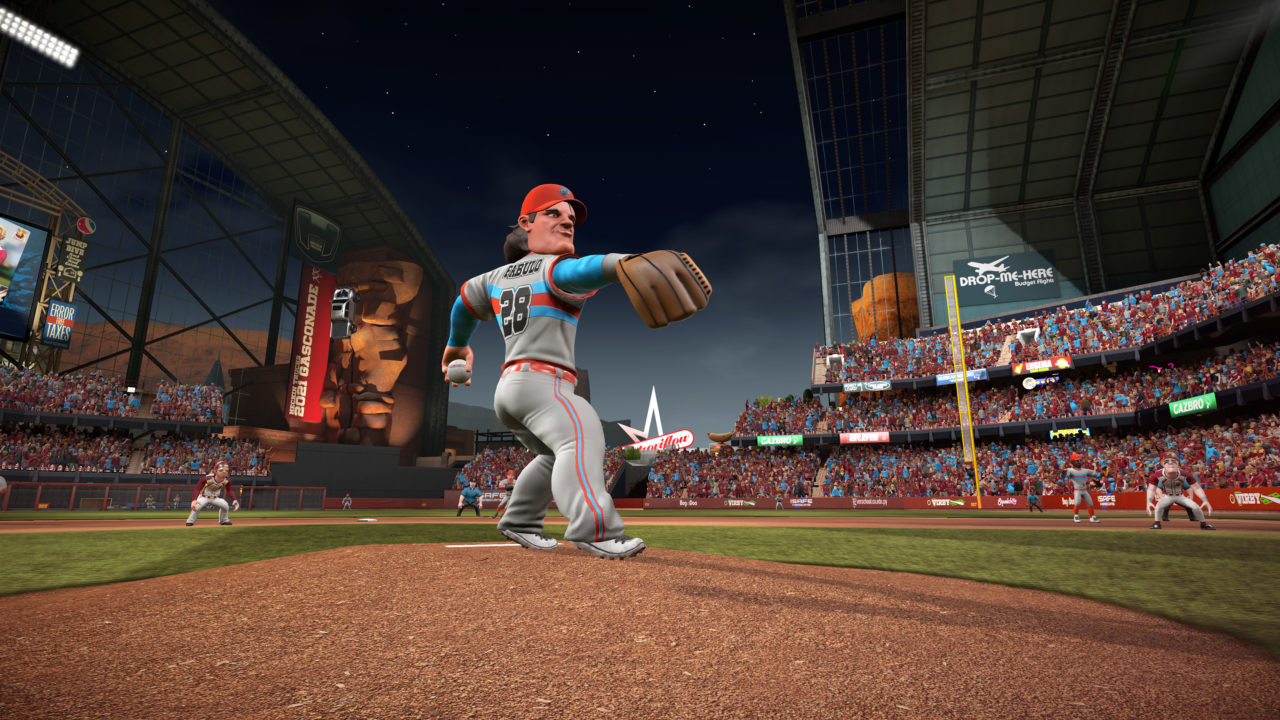 For selfish reasons, I want a replay system to post clips on social media and witness some of the majestic blasts that take place in SMB 3. Hopefully, they either find a way to upgrade SMB 3 with replay features or, assuming there is a fourth game, make sure the feature is included in that version.

No Online Franchise (Yet?)

Online Pennant Chase mode should be great when it’s introduced, but it’s not online franchise mode. If ever there was a game that deserved an online mode like this, it’s the SMB franchise.

It makes so much sense with how quickly games can be played, how much statistical information is now included in the game, and how easy it is to customize everything. Once again, I know that there is a high level of difficulty that goes into creating and including a mode like this, but I think the community wants this and it would give this game legs.

This request is high on the priority list when it comes to myself and the community in general. I do understand it’s not a small request asking for a fully fleshed out stadium creator that allows user creations to be shared, as the number of assets that must mesh together perfectly for the game to run properly is probably rather large. 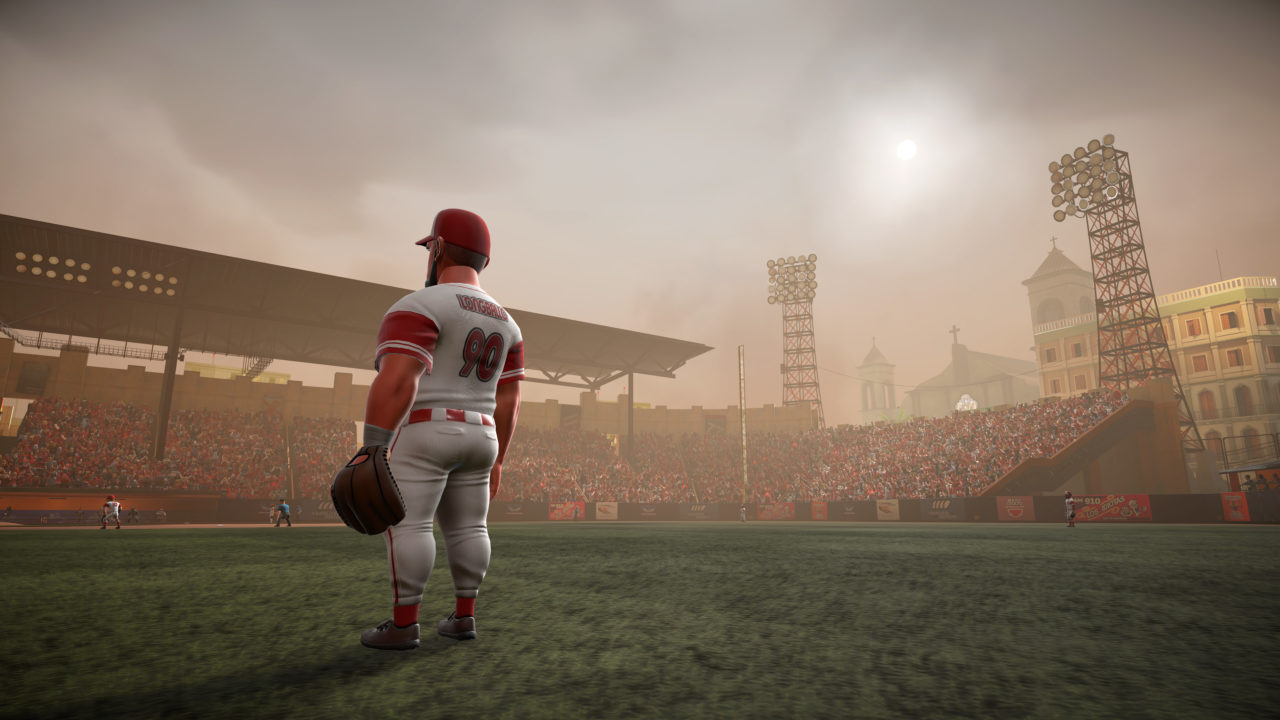 The stadiums that are included in the game are stunning and aesthetically beautiful and unique, but the ability to have stadiums like this on a grander scale would be huge. This is especially important for those folks who are trying to re-create real leagues and want to create a stadium that at least has characteristics of the real-life counterpart.

As I mentioned previously, there are some features missing like a replay system and stadium creator, but Super Mega Baseball 3 hits a home run in about every other way. The game blends old school with innovation in a seamless fashion and is accessible to the masses. SMB 3 offers an amazingly good time for those looking for longevity or a simple quick game of baseball that can walk the line between arcade and simulation.

Whether you are a baseball fan or not, Super Mega Baseball 3 offers enough depth and fun for newcomers and veterans, which makes it a must-buy for both groups. The accessibility factor is through the roof in terms of difficulty and customization options for all skill levels, and I have no doubt that SMB 3 will be a strong addition to your rotation of games for months on end.

Super Mega Baseball 3 will available on Nintendo Switch, Xbox One, PlayStation 4, and Steam for $44.99 USD.