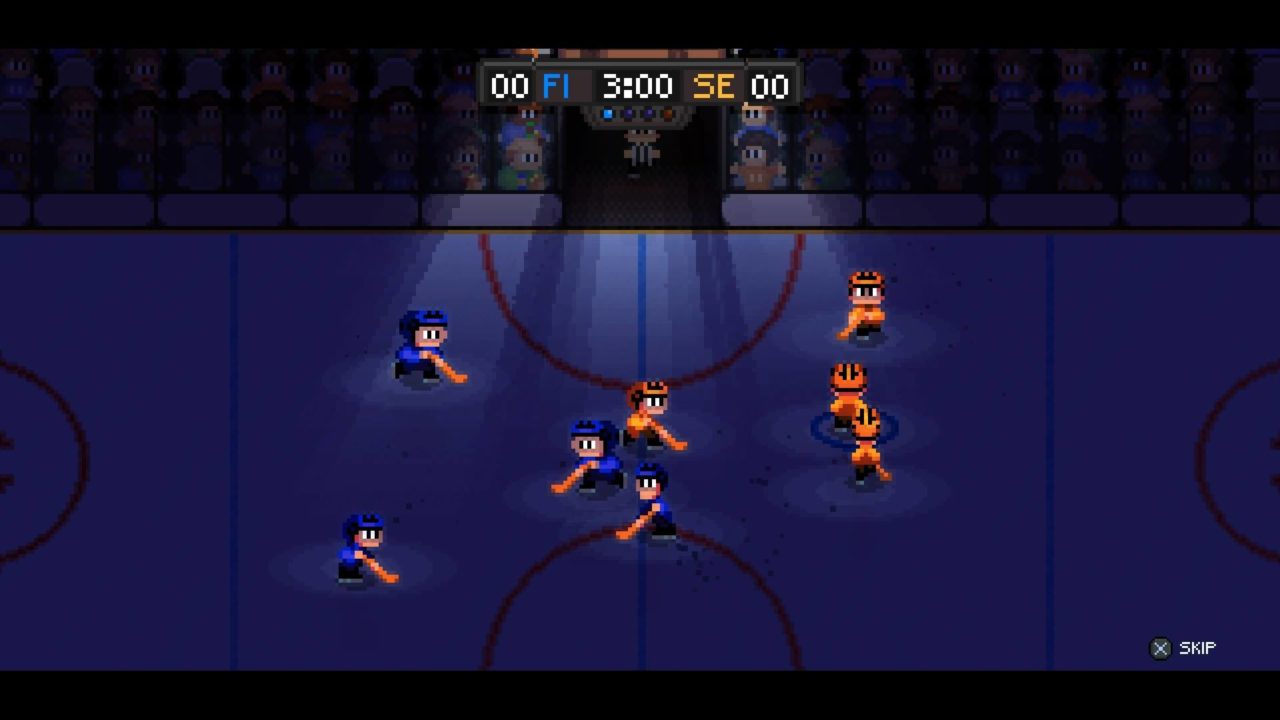 Before you play your first game, by the name alone, you can conclude that Super Blood Hockey is not going to be your typical hockey game. Super Blood Hockey mainly focuses on the violent side of hockey with a pixelated graphic spin on things. It contains overly exaggerated and comical amounts of blood and violence. Albeit a smallish game, Super Blood Hockey has many options (more then one might expect) for players to check out. 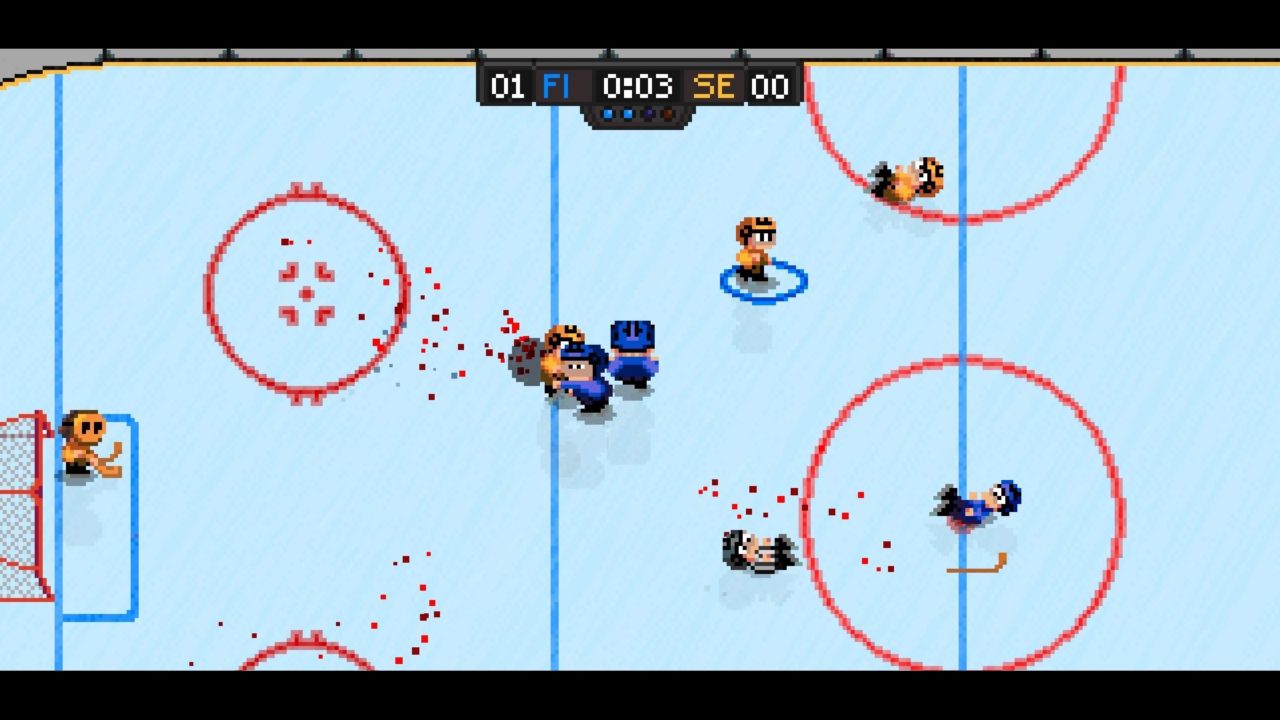 Select teams from all over the world. Players compete in a four-on-four game where every check and collision draws blood, even when the Zamboni runs into your players in between periods when they don’t make it off the ice in time. Games go quick as you can only set the period length at 1, 2 or 3 minutes. There are no whistles for offsides, icing or penalties, anything goes. The goaltenders never freeze the puck, the pucks just kind of ping pong off of them. The action will only briefly stop when one team scores a goal.

Additionally, the only other time the play stops is when a fight breaks out — or should I say an all out four-on-four brawl. The fight continues until there is one skater left standing on the blood-spattered ice. The controls in Super Blood Hockey are fairly simple and don’t require any practice. It’s basically the direction pad for skating and a button to pass, shoot and check. Just pick up the controller and watch the blood fly.

A hilariously dark mode. In franchise mode, you can create your team’s name, and then you start similarly to any standard hockey game where you pick your team, looking for who you think is the best talent and will be the best fit. However, that’s the only similarity. In Super Blood Hockey, your players are actually in the prison system. Yes, inmates. Also, you will be tasked with watching your players’ diets and monitoring their routines all while chasing the ultimate prize. Need to keep your players healthy? Well, that can be done by purchasing street drugs. Seriously, if your players need a little boost in between games, you can purchase drugs right outside of your arena. Just make sure you’re paying close attention because every decision will have an impact on your players’ ratings during the season.

Seasons in Super Blood Hockey are shrunk down to only one month and just 16 games, making every game crucial to win. This is even more true because each win adds money to your organization, allowing you to choose how to spend it. You’ll have to manage paying your players of course, but in Super Blood Hockey you will also have to pay your arena’s rent. If you struggle through a few games and fail to take in the money needed to keep your organization afloat, your coach will be forced to sell a kidney. No, seriously. Have a player suffer a serious injury and be tasked with choosing to pay for his treatment or simply cut your losses and pull the plug. Yep, that’s right.

In tournament mode, players compete in an eight-team national tournament. But win or go home has a whole new meaning in this tournament mode. If you fail to win the whole tournament, your country will be executed. Each country has its own unique execution. For example, the Canadian team is executed by manner of being run over by the Zamboni, and the Americans are executed by electrocution via the electric chair. Again, Super Blood Hockey isn’t your typical hockey game so I guess it only makes sense that the tournament mode is something wildly exaggerated. Tournament mode is another mode that, while hilariously dark, is also extremely entertaining.

In challenge mode, players compete in four-on-four games just like in an exhibition except with set rules/restrictions. You can choose from having to manually control the goaltender to locking in on a specific skater. When a challenge is complete, it will unlock a new specific modifier/match stipulation, such as allowing you to play in a 12-on-12 game or allowing you to change players’ weights.

There is a lot to like with Super Blood Hockey:

There wasn’t much I didn’t like during my time playing Super Blood Hockey. My only real complaint with the game is with the its on-ice fighting. The fighting is indeed funny at first, but it’s not as fun as I think it could have been, and after a few fights it does actually become kind of boring. It’s just a minor gripe though. 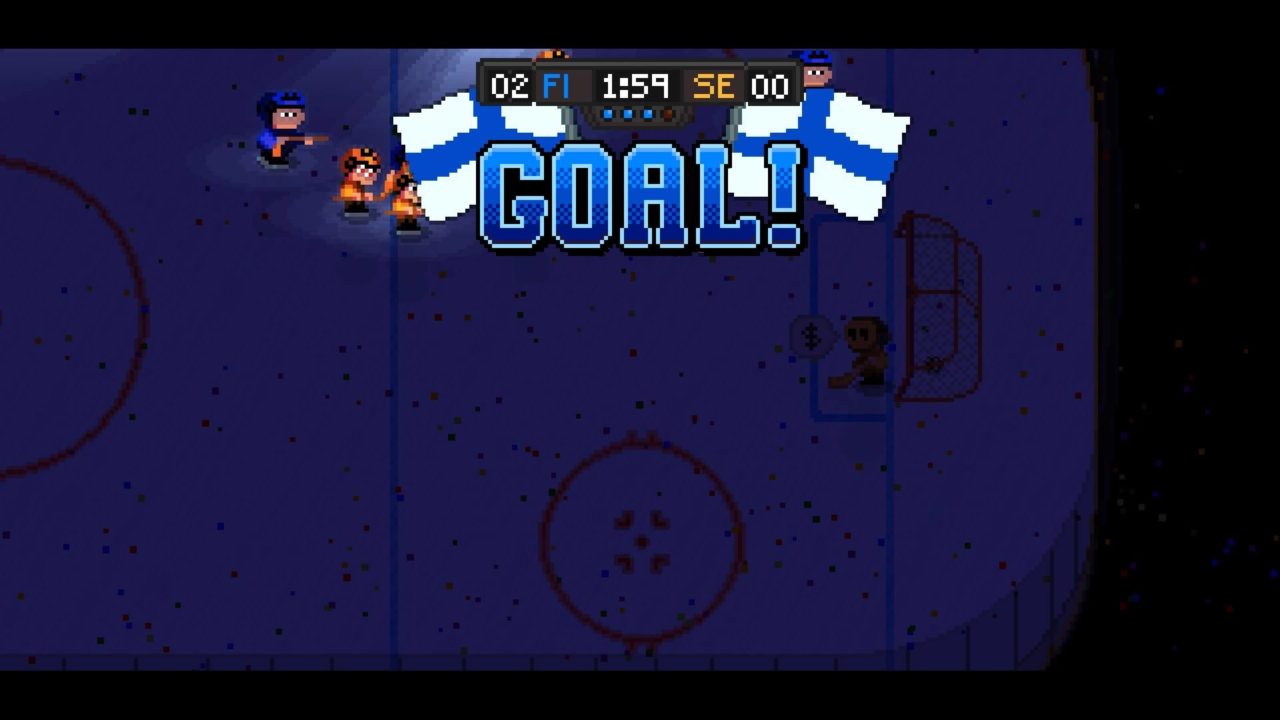 All in all, I found Super Blood Hockey to be an entertaining title with a good amount of variety to check out. The only real knock I would mention is the fighting aspect. It just seemed to be a little too goofy — if that is even possible for this type of game. If you’re a serious EA NHL player who is looking for the real NHL hockey experience with beautiful graphics, this might not be the title for you. However, if you’re simply looking for a fun, entertaining hockey title in a dried up pool of options, this title is definitely worth checking out. Just bring a towel, there will be blood.