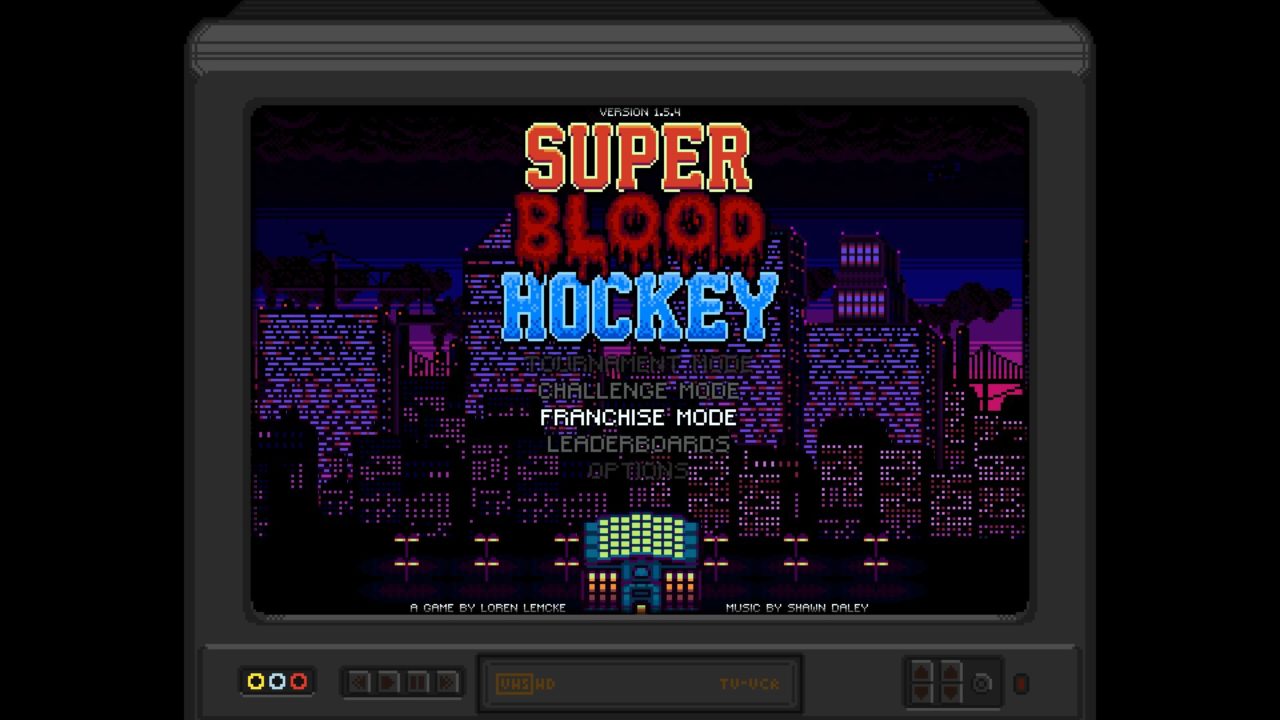 The slick-skating winger’s untimely death — the result of a partially separated belly button incurred in a brawl against Russia’s Unruly Pandas — not only robbed my Moose Knuckles of one of their top players, but also set off a series of unfortunate events that eventually derailed my attempts at defending my championship in the second season of my Super Blood Hockey franchise. 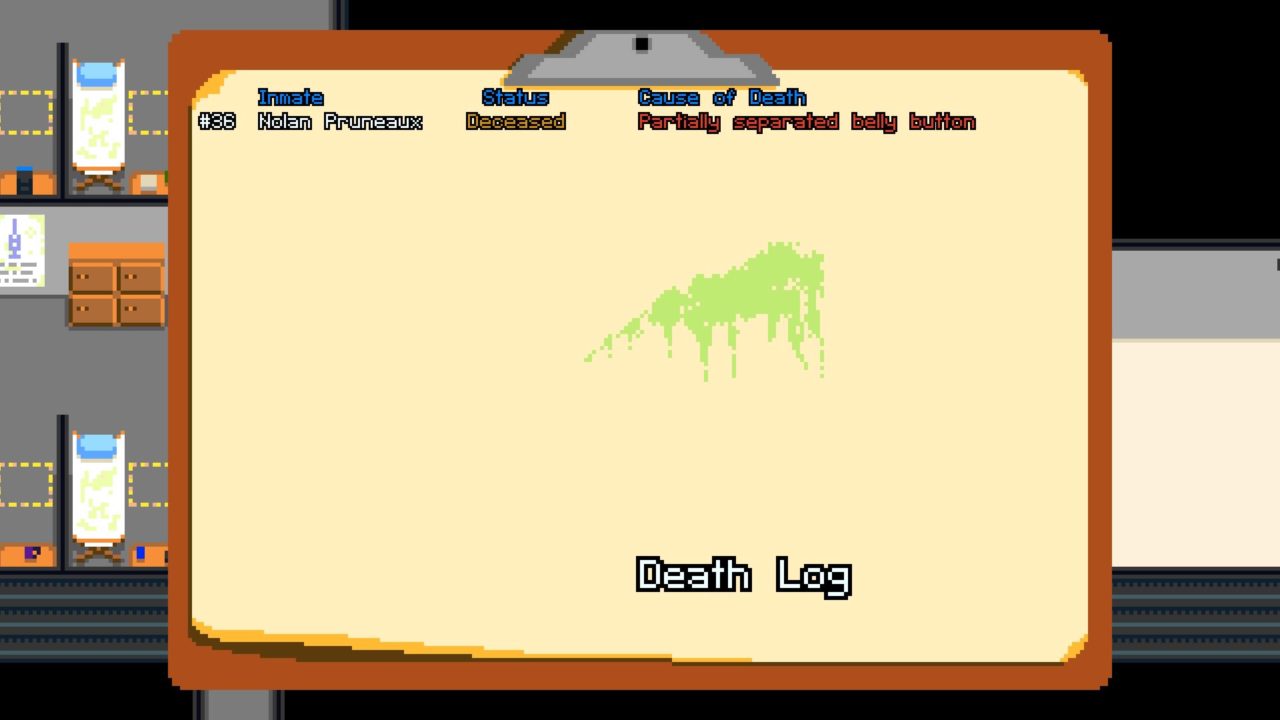 However, Pruneaux’s passing also served to underline some of the surprising challenge and complexity hidden in what otherwise might be seen as a silly, over-the-top arcade indie title.

Super Blood Hockey, released on Steam in 2017 before coming to the Switch, PS4 and Xbox One earlier this year (you can read Ryan’s excellent review of the game here), is a game I keep coming back to. Its retro graphics, frenetic but simple gameplay, and heavy doses of humor give it appeal, but it’s the franchise mode that has made it one of my favorite games of 2019.

For a title with such basic controls and straightforward gameplay, there’s a lot of depth to its franchise mode, which often forces you to make difficult, life-or-death decisions in order to succeed.

Here then are some tips and strategies to succeeding on and off the ice in Super Blood Hockey’s franchise mode.

Your first job as a general manager in Super Blood Hockey is to go out and purchase the inmates that will form the core of your team. In the beginning, you’re given a $10,000 budget (earned by selling an organ or two) with which you need to purchase at least five players (a defenseman, two wingers, a center and a goalie). I say at least five players because Nolan Pruneaux’s death underscores one of the risks in Super Blood Hockey: at any time in any game, you could lose a player to injury — either for a portion of the period or multiple games — or death, in which case you lose the player forever.

You have to ice five players for each game, so if you lose a player, you might be forced to buy a sixth (or seventh or eighth) inmate as a replacement. If you’ve used your entire budget on five skaters, you’ll be forced to sell one of your more valuable inmates in order to (hopefully) purchase two cheaper players.

The only way to earn more money in Super Blood Hockey is by winning games, so if you get yourself in a bind where you’re selling good players in order to buy cheaper ones, winning can become increasingly difficult, which puts more strain on your budget. Exhaust your budget entirely, and you’ll be handed a pistol and given only one choice: end your miserable general manager existence.

Suicide, of course, is a last resort in Super Blood Hockey. With some careful purchases in the beginning, and a little luck on the ice, you can start to assemble a winner and eventually make money concerns a thing of the past. (In fact, if there’s one drawback to the game’s franchise mode, it’s that a successful first season can put you in a position where money is no longer much of a consideration at all.) 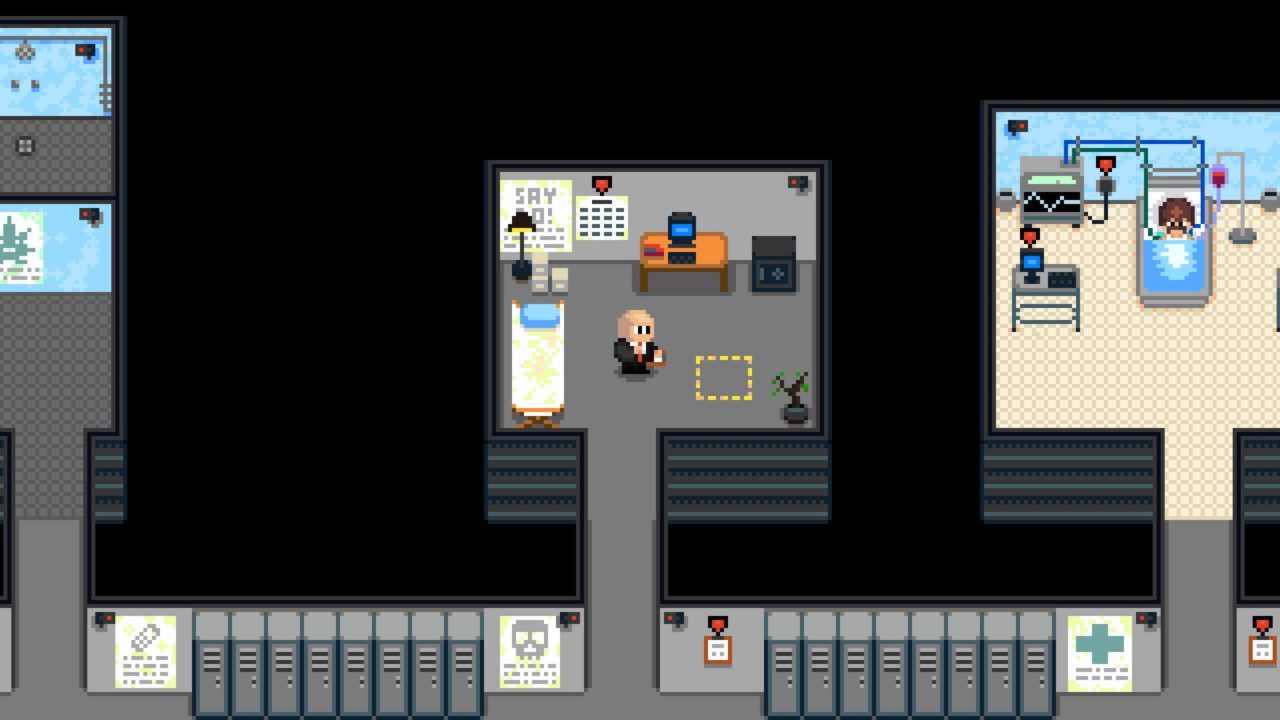 You’re given a 100-player catalog from which to purchase your initial squad. Every player’s attributes (skating, accuracy, power, brawling and robustness) are unique and you can develop them as the season progresses. However, you’ll want to give some thought as to how you compose your team from the start because in the early stages of the game those original players are going to form your lineup night in and night out. In other words, you’ll want to make sure you’re assembling a team that’s competitive and suits your play style.

Players with higher skating attributes are faster, while higher accuracy increases their ability to make pinpoint passes, power reflects how hard they can shoot the puck, brawling indicates how well they can handle themselves in a fight (and there will be plenty of those), and robustness denotes how hard they are to knock off the puck.

The other attribute you’ll want to pay close attention to is brain damage. The more brain damage a player sustains, the more likely they are to suffer a catastrophic injury in a fight. Purchasing players with a lot of pre-existing brain damage sets yourself up for disaster in the early going.

Personally, I find choosing players with a lot of speed to be the way to go in the beginning. Speed kills in Super Blood Hockey and you can score a lot of goals off breakaways. So if you can build a group with a lot of team speed, you can put yourself in a position to steal a few wins in the early parts of the season and start to build yourself a nest egg to further develop your team.

One final note on selecting your team: don’t put much thought (or money) into your goalie. Goalies are the only players who do not participate in brawls (although skate too close and the opposing goalie will happily give you a shot or two) and therefore they never sustain any brain damage. As such, you only ever need one goalie, who will slowly level up over time.

Speaking of leveling up…

There are a number of ways to develop your players as your franchise progresses. The primary way is by simply playing the games. During every game, your players will earn attribute bonuses based on in-game activities like the number of passes they complete, their shots on goal, goals, assists, falls, knockdowns, brawls and distance skated. So the more you use a player, the more you’ll build up their ratings. The only caveat is that brawls and falls also contribute to brain damage, so you’ll want to keep a close eye on each player’s brain damage to ensure it’s not getting too high. All attributes are rated on a 100-point scale, but it’s a good rule of thumb to try to avoid letting any one player’s brain damage rise much higher than about 20. 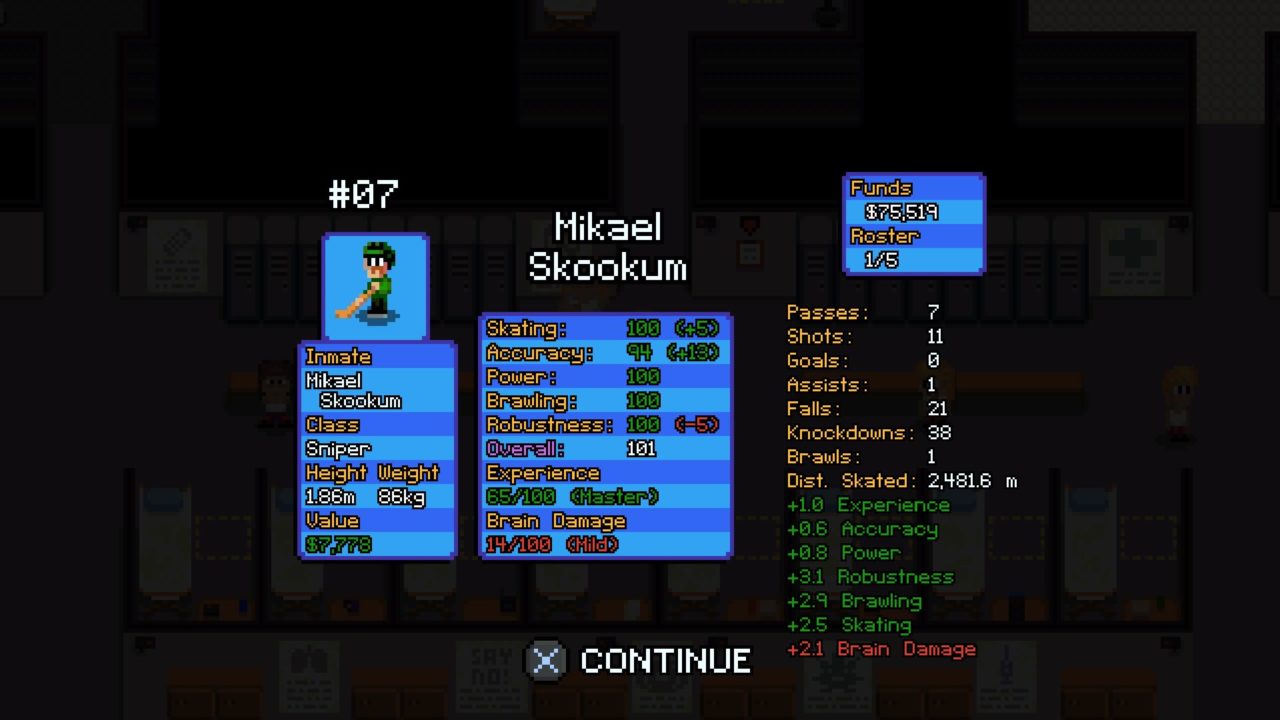 Off the ice, you can further develop your players by telling them to hit the showers (which reduces brain damage), the heavy bag (which improves brawling), the treadmill (which improves skating) or the weights (which improves power). You also have to manage each player’s diet, keeping an eye on whether the player is underweight, a normal weight or overweight. Underweight players get a bonus on their speed attribute but take a hit in terms of robustness, while overweight players have the opposite problem. Deciding what shape you want each player to hit the ice in will impact your team’s performance accordingly. 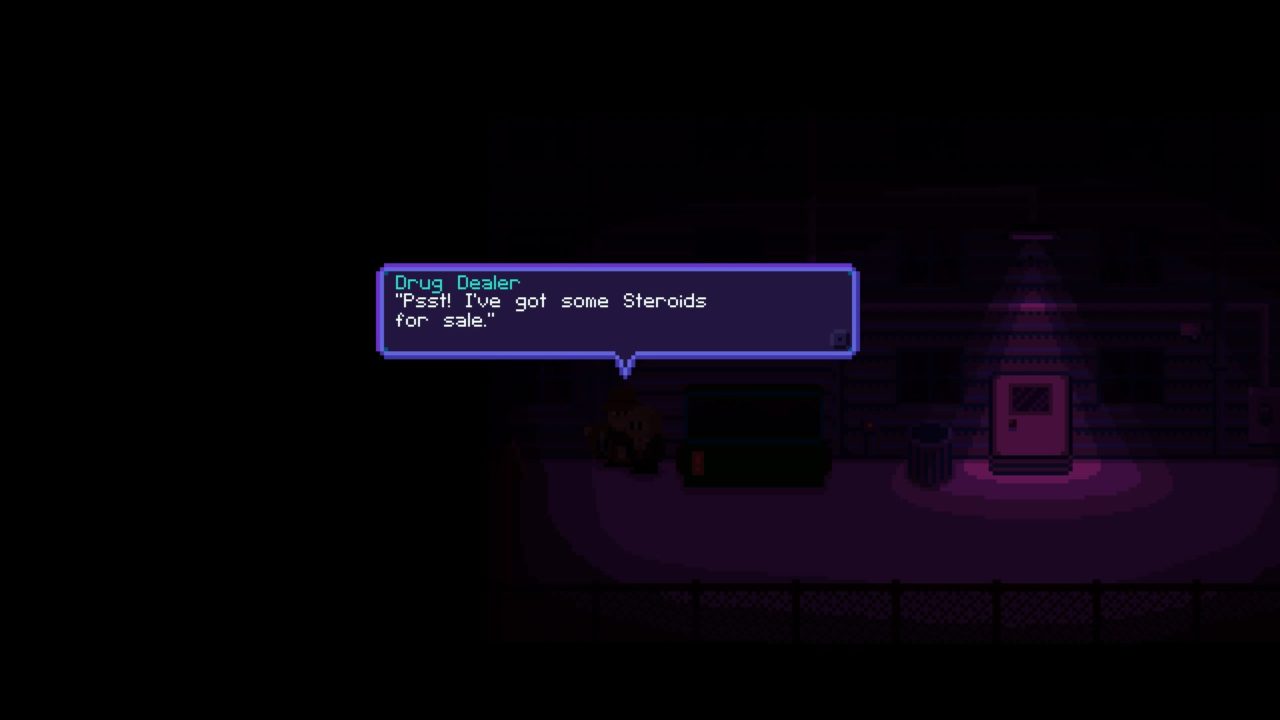 The final, somewhat sketchy way to enhance your players’ attributes is through the use of drugs. A quick trip to your local neighborhood back-alley drug dealer can get you access (at a price) to steroids (which improve skating, power and brawling), cannabis (which doubles a player’s healing ability but comes at a price of reducing brawling), gainers (which rapidly add weight to a player) and cutters (which help a player quickly shed weight). Be careful though, players can also overdose on drugs.

On the ice, there are a couple of surefire ways to win. As mentioned earlier, breakaways are a great way to score goals. So if you can put together a team with at least one fast player, try to put him at center and then feed him the puck with outlet passes. It’s often very effective to do a quick 360-degree Savardian spin-o-rama right in front of the goalie before you shoot the puck. The spin often sends the goalie in the wrong direction, leaving the opposite side of the net wide open for you to shoot at. Just be careful not to get in too tight to the goalie because the slightest contact with him will jar the puck loose. 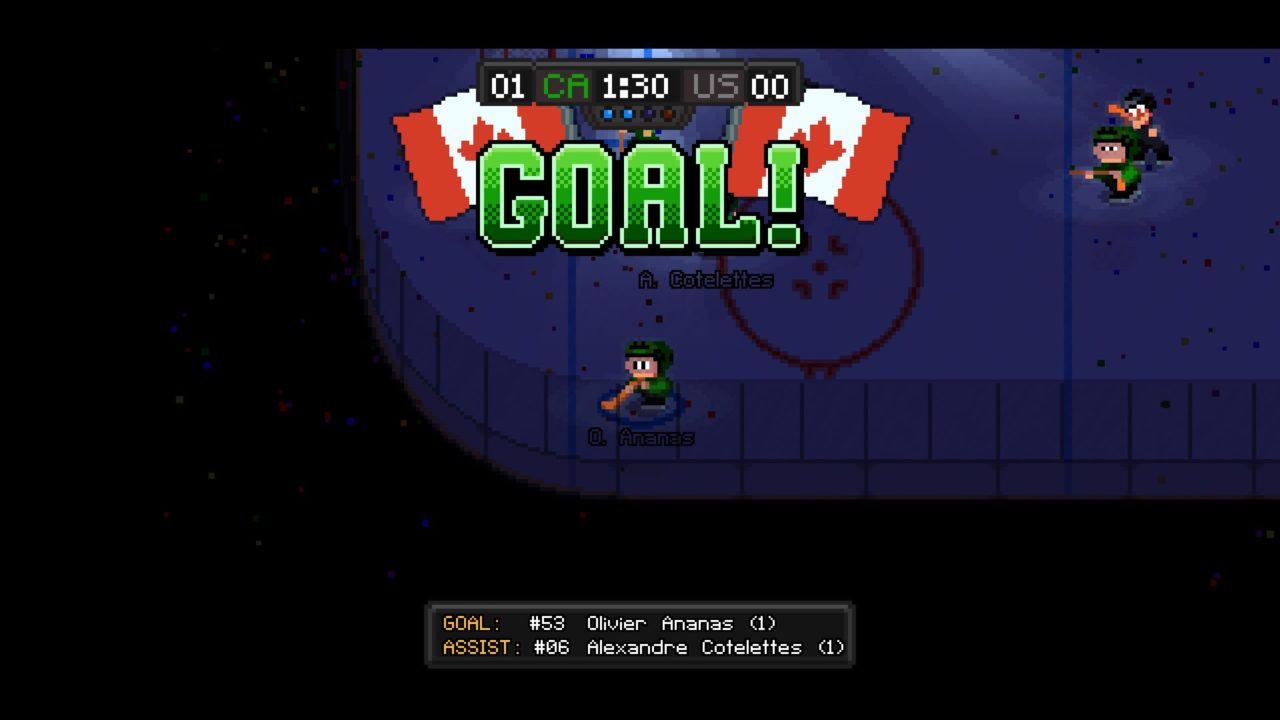 Another helpful strategy for scoring goals is the one-timer. Whenever possible, try to set up on one side of the net and then fire a pass across the crease to a teammate for a quick one-timer. The timing will need to be perfect because the CPU goalies can cover a lot of ground really quickly. But with the right combination of a skilled passer and a player with a good shot, it’s possible to light the lamp multiple times using this technique. However, keep in mind that every player on the ice (teammates and opponents) as well as the referee can get in the way of your passes, so you’ll need a clear lane to make effective use of the one-timer. 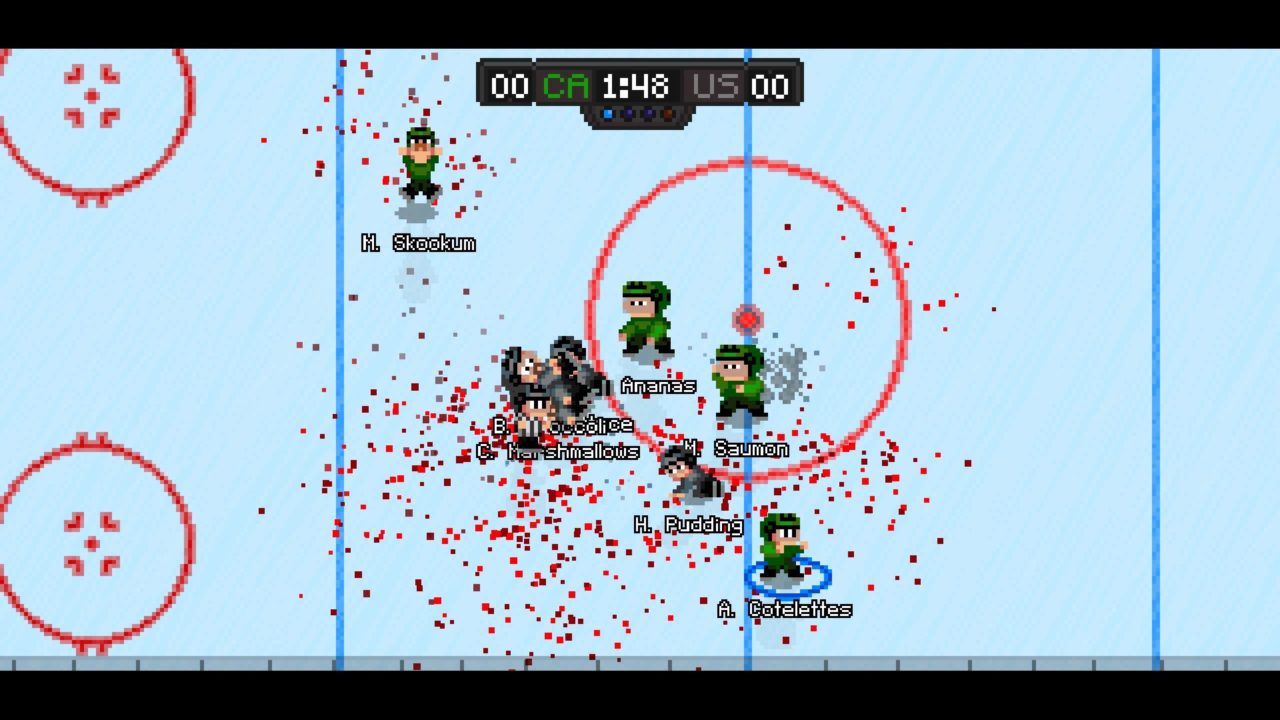 If you have a team with a number of skilled brawlers, starting fights can also be a helpful tactic. If you check any opposing player enough times in a row, sooner or later a full-on brawl will erupt. Win these brawls and one of the opposing team’s players will be injured for anywhere from a minute or two to the entire game. It’s not unheard of to end up playing 4-on-2 or even 4-on-1 for stretches in the game, which is when you can really pour on the offense. However, as much fun as brawls can be, try not to get too attached to using them as a tactic because they lead to brain damage, injuries and deaths that can really put your team at a disadvantage. 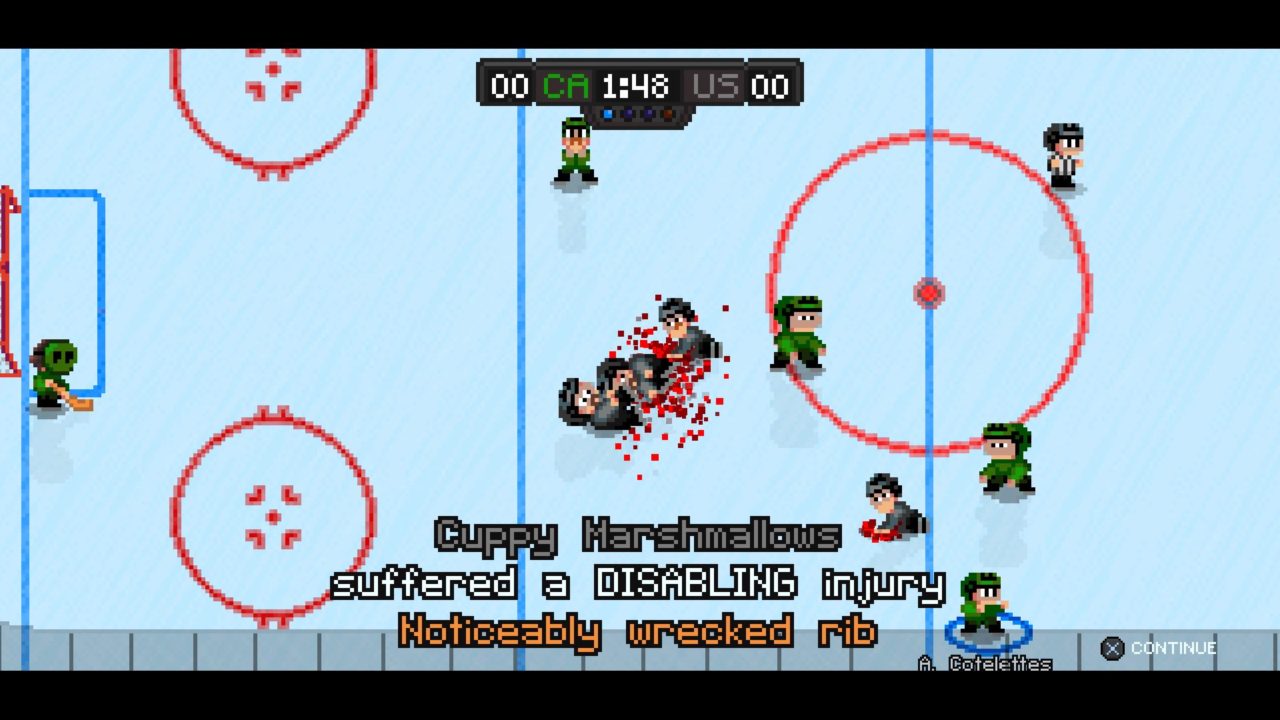 Each season in Super Blood Hockey consists of 13 regular season games and a three-game round of playoffs, spread out over the course of a month. Take note of when your team has nights with back-to-back games (or sometimes three games in a row) and when they have off days. Whenever possible, you’ll want to rest your best players so they don’t sustain brain damage or injuries when the playoffs roll around. You’ll also want to give them time to rest and recuperate from the grind of the season. It’s a balancing act though, as you’ll also need your best players on the ice in order to win games, and in order for them to continue developing.

Over the course of a season (or multiple seasons), you’ll have to carefully manage the playing time of your stars in order to ensure they’re available to you in the season’s most critical games. It’s never a bad idea to develop some of your benchwarmers too, so when they’re pressed into action you’re still using a competitive team.

It’s also important to note that your team’s rent will be due at the start of the final week of the season. As such, you’ll need to make sure you have enough money in the bank to pay your rent, lest you be forced to declare bankruptcy. Managing your finances can be a challenge in the early days of your franchise. Feeding your players costs money, as does buying illegal drugs. Providing injured players with medical care is also an expense, and there’s nothing more frustrating or heartbreaking than being forced to pull the plug on an injured star player simply because you can no longer afford his medical bills. In short, watch how you spend your dollars. 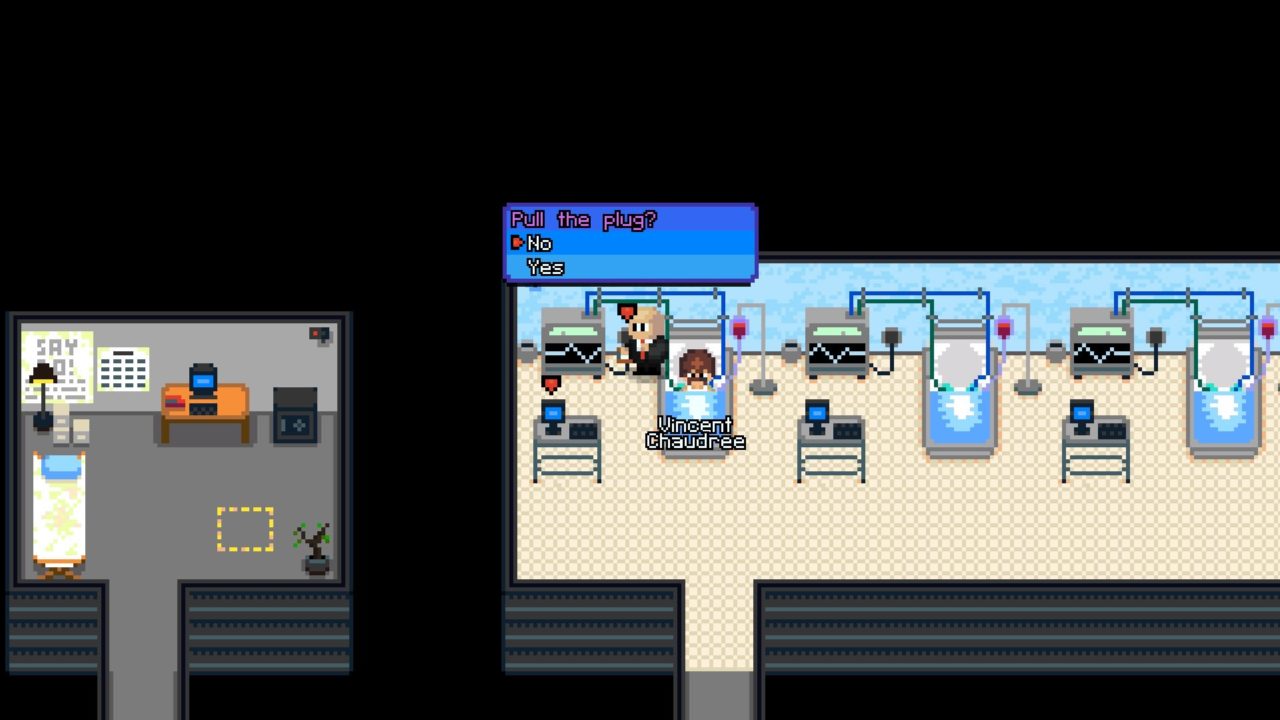 Manage your on-ice and off-ice strategies effectively, mind your budget, look after your inmates and you just might be able to put together a championship squad, much like I hope to do to avenge Nolan Pruneaux. 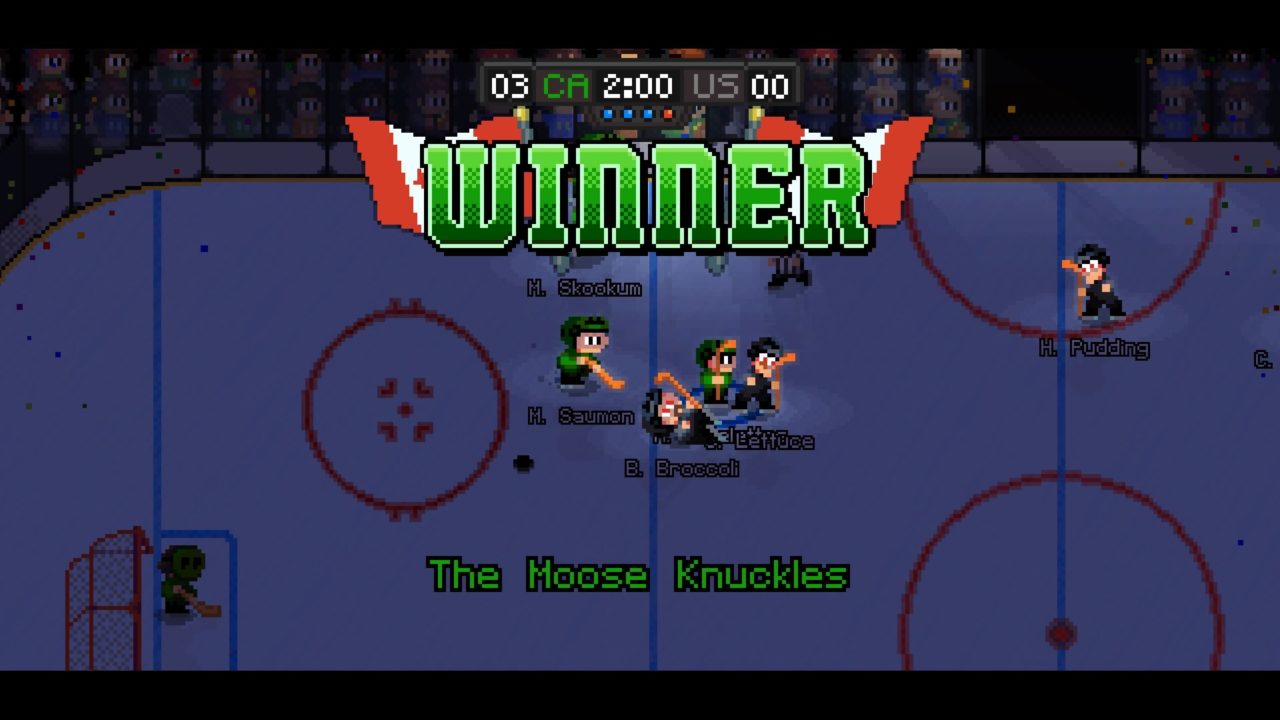 Got any of your own tips or tricks to winning in Super Blood Hockey? Does this get you interested in checking out this indie arcade title? Let us know in the comments.