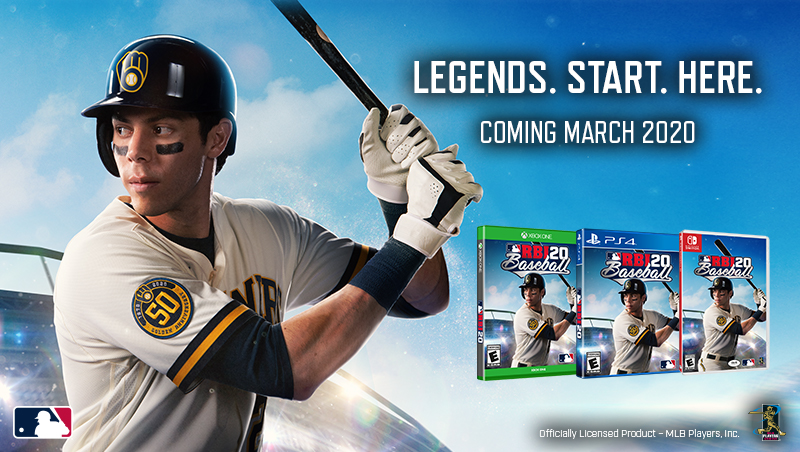 Christian Yelich of the Milwaukee Brewers has been named the cover athlete for R.B.I. Baseball 20. The game, which is officially licensed by MLB and MLBPA, is scheduled to arrive in March 2020 for the Xbox One, PlayStation 4, Nintendo Switch, iPhone, iPad and supported Android smartphones and tablets. The console version will cost $29.99, for smartphones and tablets, it will cost $6.99.

From being a first round draft pick (2010) to becoming the first Milwaukee Brewer to win a National League batting title (2018/.326), Christian Yelich today adds another first to his growing list of accolades as he is tabbed the second Milwaukee Brewers star to be featured as a cover athlete on a Major League Baseball (MLB) licensed video game – R.B.I. Baseball 20.

Yelich’s R.B.I. Baseball 20 cover announcement comes on the heels of yesterday’s unveiling of a new Brewers logo and uniform design for the historic franchise’s upcoming 50th anniversary season in 2020. The Club’s new look includes the return of a beloved logo, the iconic ball-in-glove initially introduced in 1978.

Yelich is a two-time All-Star and a two-time recipient of the Hank Aaron Award given to the top hitter in each league as voted on by a panel of Hall of Famers and fans. Along with his 2018 NL Most Valuable Player Award, Yelich was voted the 2018 NL Outstanding Player in the Players Choice Awards by his peers around the League. He also is the owner of three Silver Slugger Awards annually given to the best hitters at their positions as determined by managers and coaches throughout MLB.

In one of his more interesting “firsts,” Yelich was the first and only player to hit for the cycle twice in one year against the same team (2018/v. Cincinnati Reds).

Building on its foundation of matching arcade baseball action with an ever-increasing array of updates, features and enhancements, R.B.I. Baseball 20 – as developed by the MLB Games & VR team – innovates on its uniquely fast paced baseball experience with wholly re-tooled hitting and pitching mechanics, along with a host of improvements covering a broad spectrum of visual and gameplay categories.