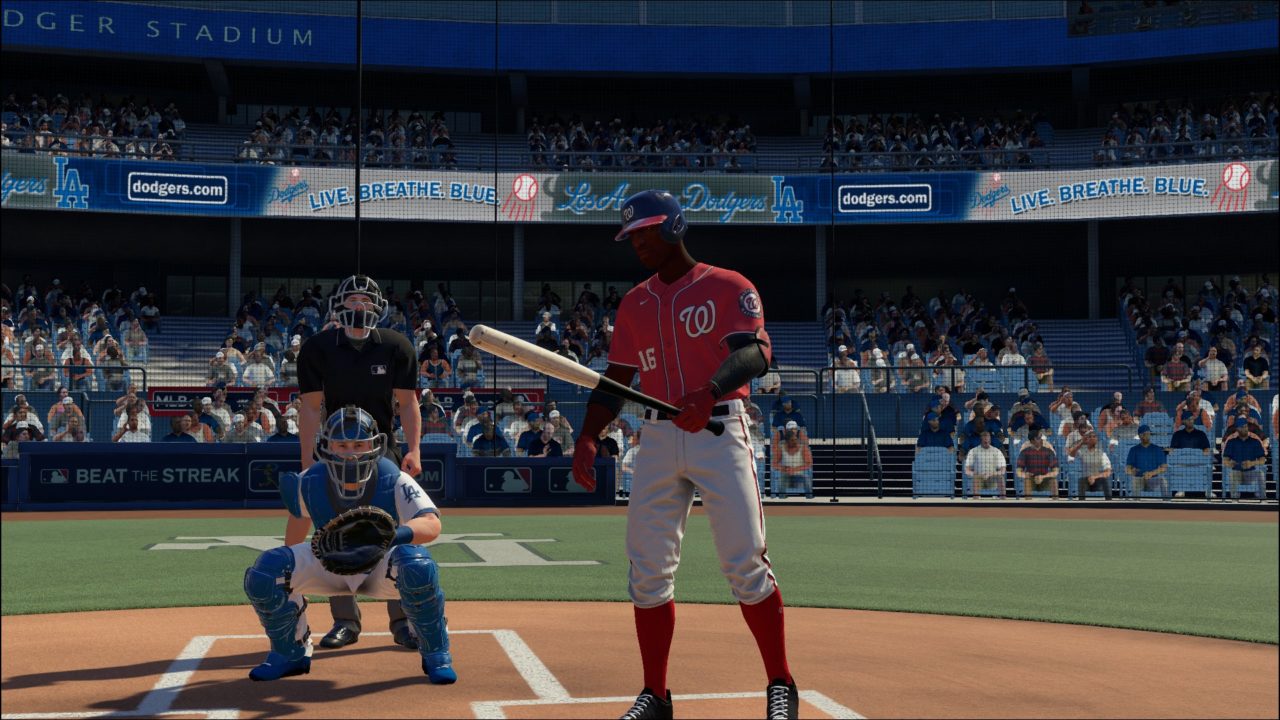 It’s another year and another improved game by MLB Advanced Media. RBI Baseball 20 is once again an upgrade from its predecessor.

This year’s game has added a behind the pitcher view for defense/pitching, and this is something that has been long overdue. Mechanically, it works well. Your pitch types are placed in a circular pattern. You choose your pitch, and then a circle pops up and this is how you aim for your location. You then can select the effort put into the pitch by holding down the pitch button, but if you max it out it could be inaccurate.

One thing I don’t like is that with certain pitchers who throw in the upper 90’s, they only throw in the low 90’s without maxing out the effort. Maxing out the effort drains a pitcher’s stamina at a quick pace so this give and take is a little too excessive. Other than that, I like the system. They did well getting a lot of authentic pitching motions into the game as well. 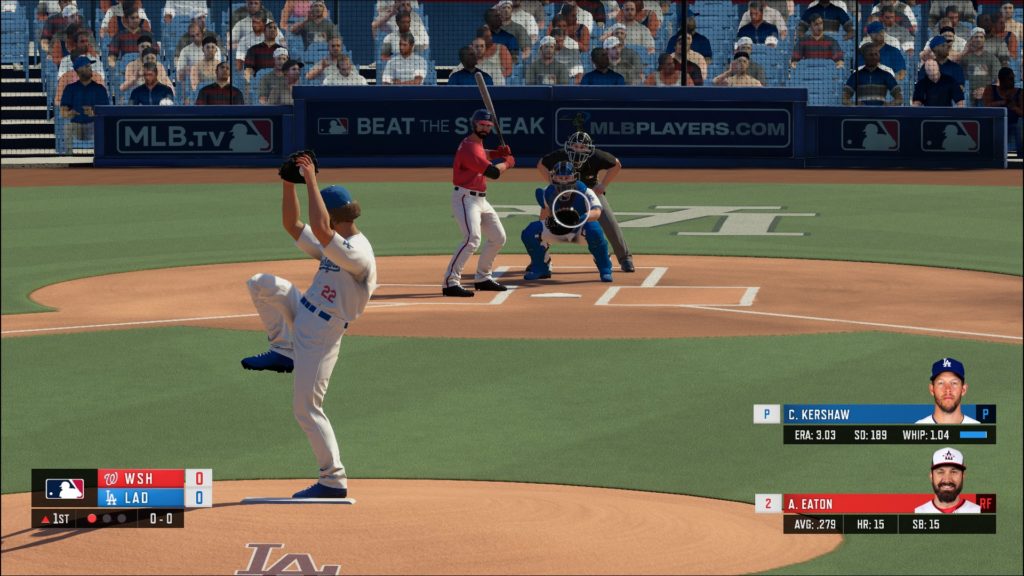 Hitting has also changed this year. You now have a more familiar hitting view as the default setting. However, I’m not so much of a fan of how the new mechanics work. There is a meter in the dirt that you can charge up by holding the swing button down and then releasing it to swing. But this also puts your batter in an early stride and cock position. It’s pretty unrealistic.

It’s nice to be able to move it left or right as well, but if you would prefer to avoid using this method, you can simply press the swing button to hit the ball. Overall though, I do think hitting has improved over last year’s method of moving your player around the box in an almost top-down view, which you can still use if you would like — same with pitching. So it’s good they left those options in the game. 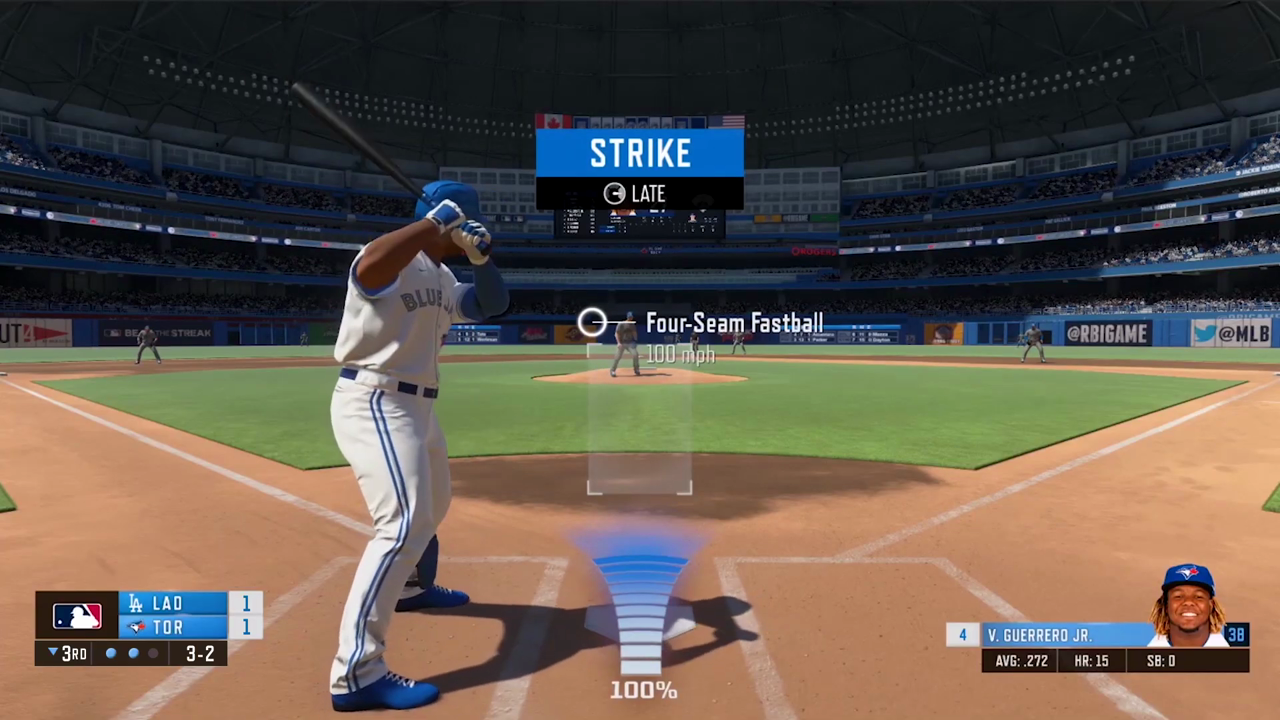 One of the game’s biggest weaknesses over the last few iterations has been the fielding. I’m happy to say it is much better this year, but with a few notable problems. First, the good. The fielders move with some weight to them. The in-play defense camera is fantastic, in my opinion. The new diving animations are really nice and realistic looking.

However, this is where a problem also exists. Just when you think you have slapped a ball through the hole, or hit a line drive out of a fielder’s reach, well you didn’t. Because even though the ball is nowhere near the defender’s glove, it will sometimes get sucked right into the glove. If this is something that can be patched, then this could make the fielding very good overall.

With these basics covered, let’s dive a little deeper. 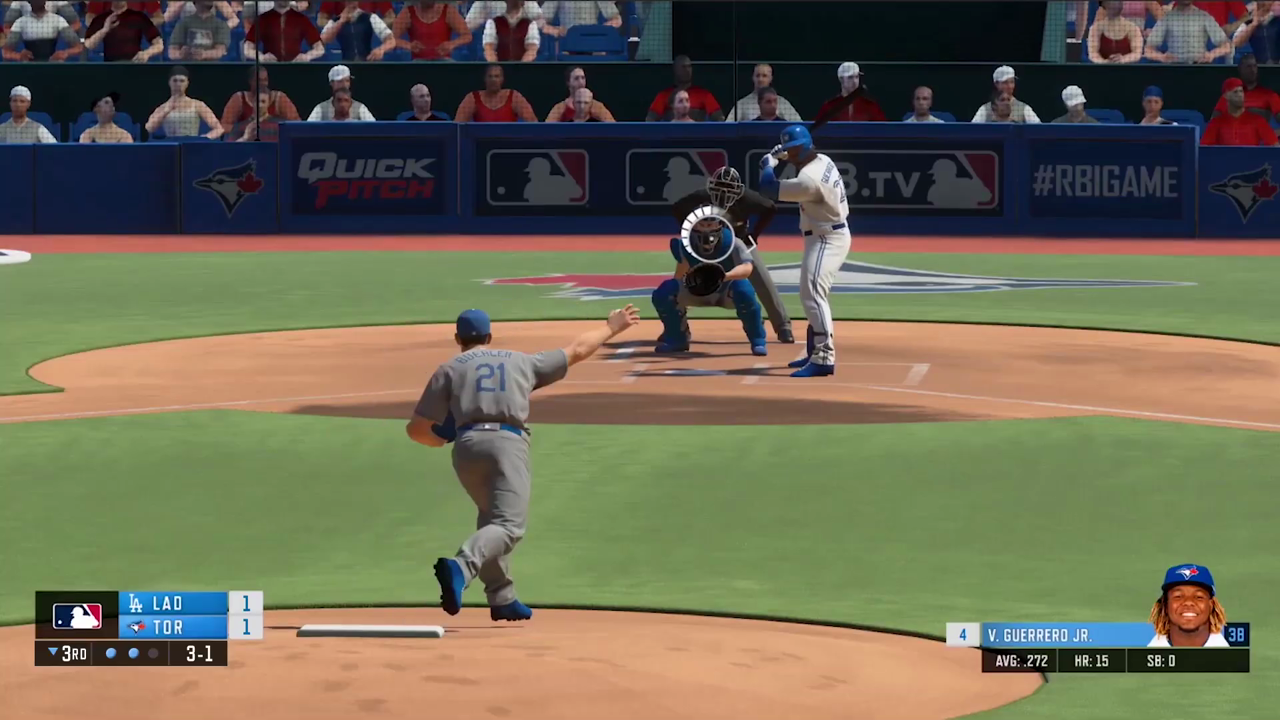 Once again, MLBAM has improved on what was at first a dismal effort for the first few years of the game. It seems like every year RBI gets a little better. However, this year is quite a leap over last year. But this doesn’t mean the gameplay is necessarily great. Parts of it are, parts are improved but still lacking, and parts are still just not good. It’s not going to compare to The Show or maybe even Super Mega Baseball. Still, there is some quality here. The new pitching mechanics are solid, the base running is well done this year, the dives are nice, and the ball seems to behave much more realistically this year with slicing and hooking. 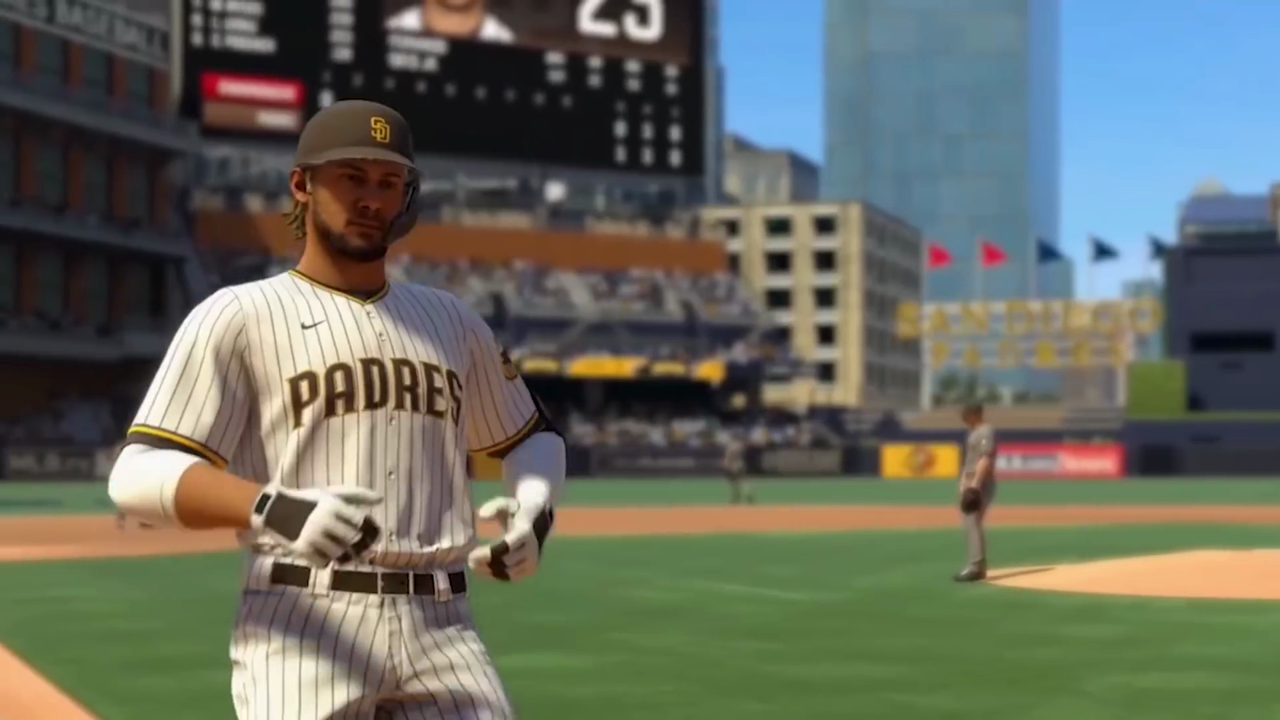 While franchise mode is not very deep, it’s still fun. One of the best parts is you can select how many games you want to play. You can play 52, 81 or a normal 162 game schedule. I also like that you have settings and not sliders for injuries and trades. For injuries, you can choose minor, which would only limit an injured player being out for no more than 10 days. The next choice is moderate, which could put a player on the shelf for up to a month. Then, of course, there is realistic where any type of injury can occur and a player could be out for the season.

Then you have a trade setting. Unrestricted is just what it says, every trade will be accepted. Then you can select loose, where all trades will get a loose evaluation and most will be accepted unless the trade seems unbalanced — here is where I liked this setting. I initiated a trade with the Dodgers. As Cleveland, I offered Francisco Lindor for Gavin Lux and Dustin May. I got denied. I added in Aaron Civale and they accepted it.

Lastly, there is strict. GMs give strict evaluations on offers and will only accept if deemed fair. I tried the same trade and it was also accepted.

But this is not a virtual GM’s dream mode. After the season, it shows you the players who retired and then you can sign free agents. And that’s about it. You can also play with legends, which is a nice touch, but honestly they don’t feel any different than any other player. And that’s something that is also in normal gameplay. 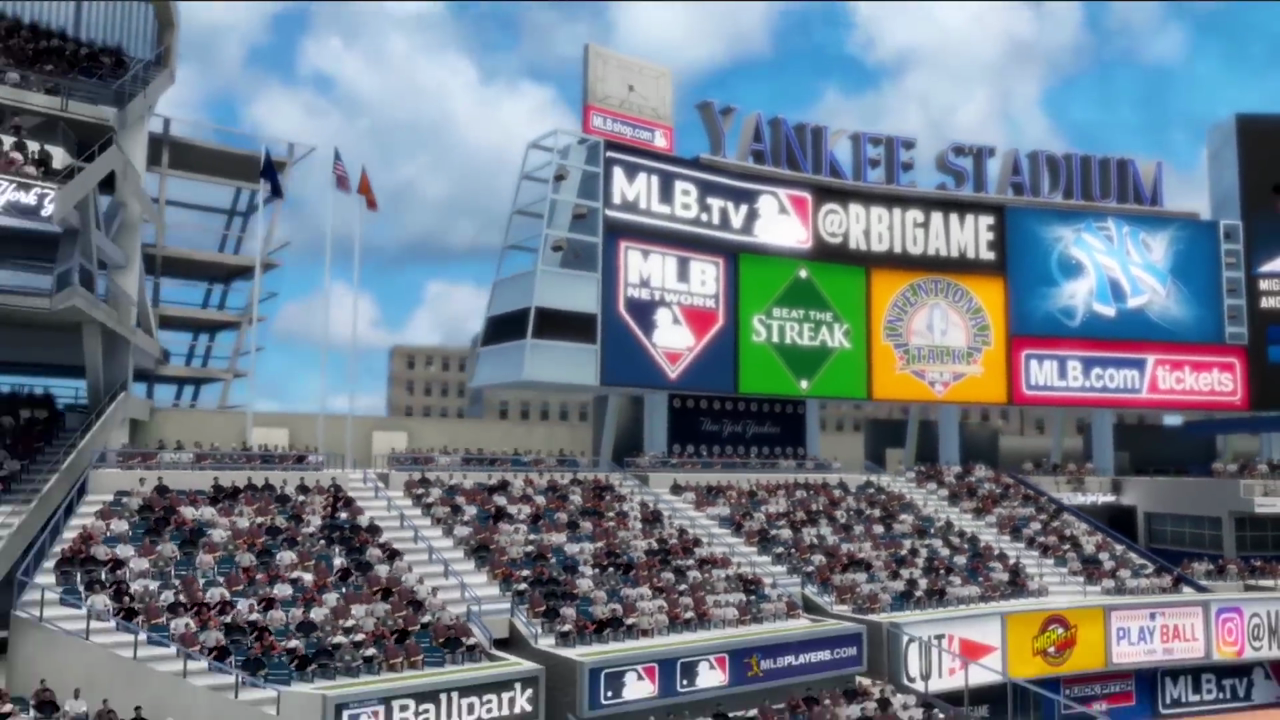 Another year and no commentary. This really takes away from the game’s aesthetic. I think there is no excuse not to have some basic commentary in this game by now. I know it’s not easy to do, but it can and should be done. You have a voice telling you out or safe and other basic things, and that’s about it. Maybe now that the gameplay has gotten to a point of acceptability, the developers can concentrate on more presentation elements. Obviously, the most important being commentary.

I do have to say there are a couple things I do like. One being that the stadiums are really nice, and the other is the in-play defensive view. 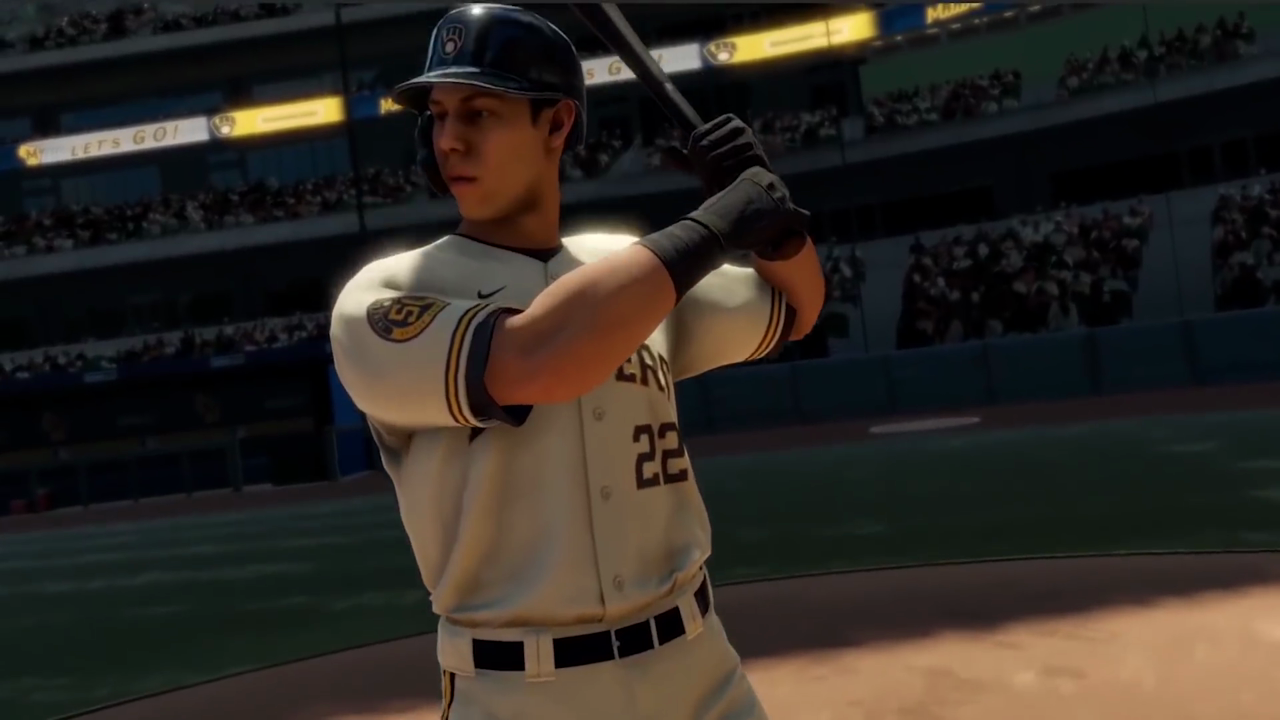 We have exhibition, Home Run Derby, franchise and postseason. You could say online multiplayer, but I wasn’t even able to get a match going. I think there are some issues right now with the Xbox version and playing online. As far as the other modes, they are all fine. It’s not like any of them are bad. But I think the game needs something to stand out like Diamond Dynasty in MLB The Show. I’m not saying copy it, but some type of mode in that ballpark would benefit the game a lot.

RBI Baseball 20 Is a solid game of baseball. It has improved immensely over the last couple years. MLBAM is getting close to a very good game of baseball. I was pleasantly surprised when I fired up the the game for the first time. There are still plenty of faults in the game. The fielding needs some work, but overall the gameplay is improved. The new hitting and pitching mechanics are a breath of fresh air for the series. More fielding animations and more animations overall would make this game look very good stacked against the competition.

If you don’t have a PS4, or simply are tired of what MLB The Show has to offer, I would suggest trying to play RBI Baseball 20 somehow before you buy it. If you decide to buy it on blind faith, I think you will find a fun game of baseball.

R.B.I. Baseball 20 Gameplay Tuning Update Available - Details Here
Out of the Park Baseball '21 Review: You Should Already Know It's Good