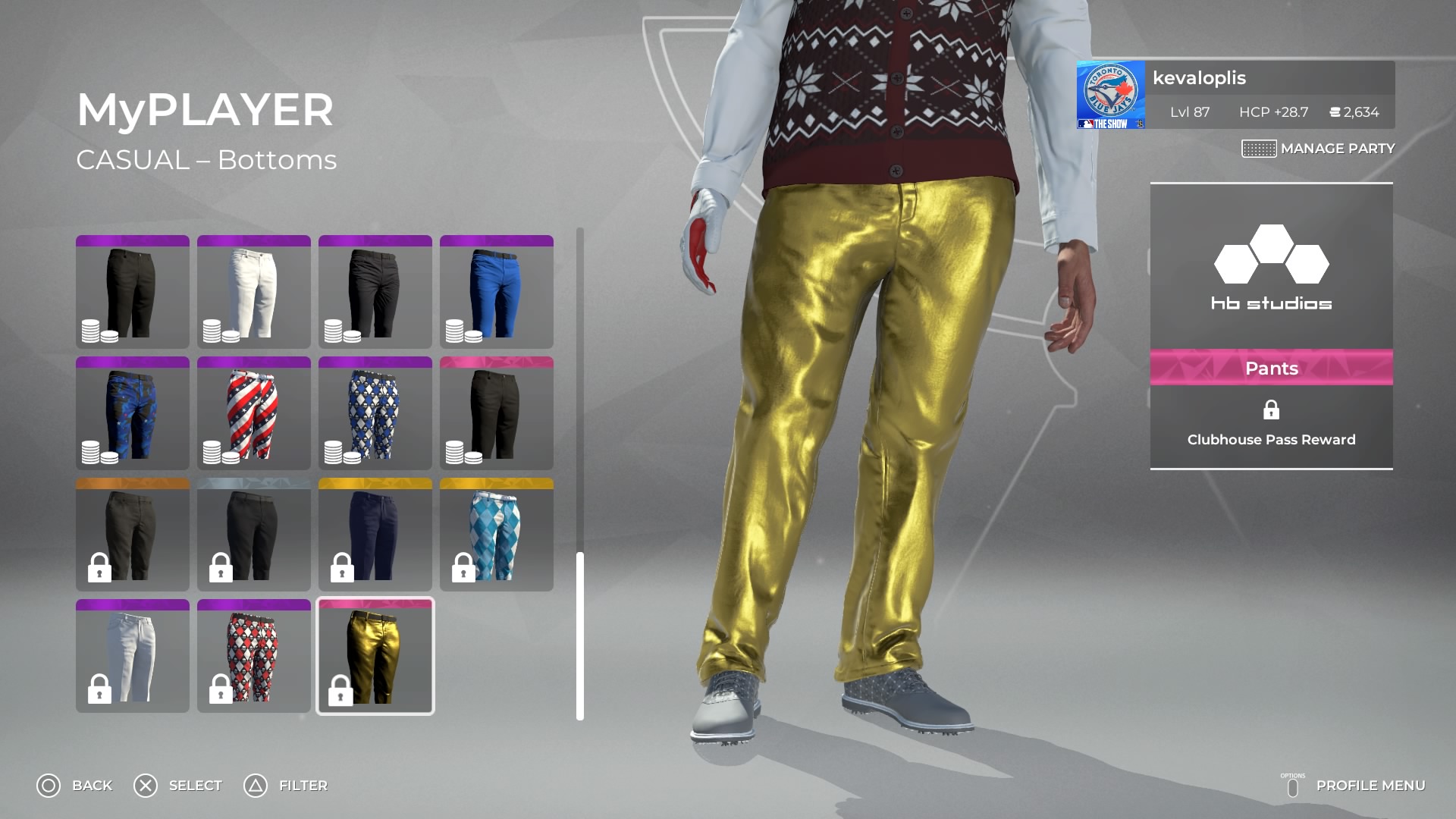 As anyone who has spent a fair amount of time with PGA Tour 2K21 will tell you, an enjoyable part of the experience is the ability to customize your MyPlayer golfer using both the clothing that you wear and the clubs that you carry in your bag. While you can unlock many of these items by playing rounds across different modes, or even just by spending the coins you earn through golfing, the new PGA Tour 2K21 Clubhouse Pass provides you with more options to set yourself apart from others on the course.

A Battle Pass By Another Name

The way the Clubhouse Pass works isn’t all that different from similar features in other games, such as the ones in Fortnite or Rocket League (or now NBA 2K MyTeam). Providing you with up to 75 new items across different tiers, how much you want to get from the Clubhouse Pass — like many things in life — of course depends entirely on what you’re willing to spend. Those who don’t want to fork over anything other than what they spent on the game itself will still have the chance to unlock items at every five tiers for a total of 15 items in all if they play enough to complete all of the tiers within the three months this Clubhouse Pass covers.

Those who don’t mind shelling out a few extra dollars ($7.99 USD, to be more specific) will have the opportunity to unlock an item for every one of those 75 tiers with the Premium Pass. If you spend a little more, you can get your hands on the Premium+ Pass that will allow you to skip the first 20 tiers and unlock those items immediately. 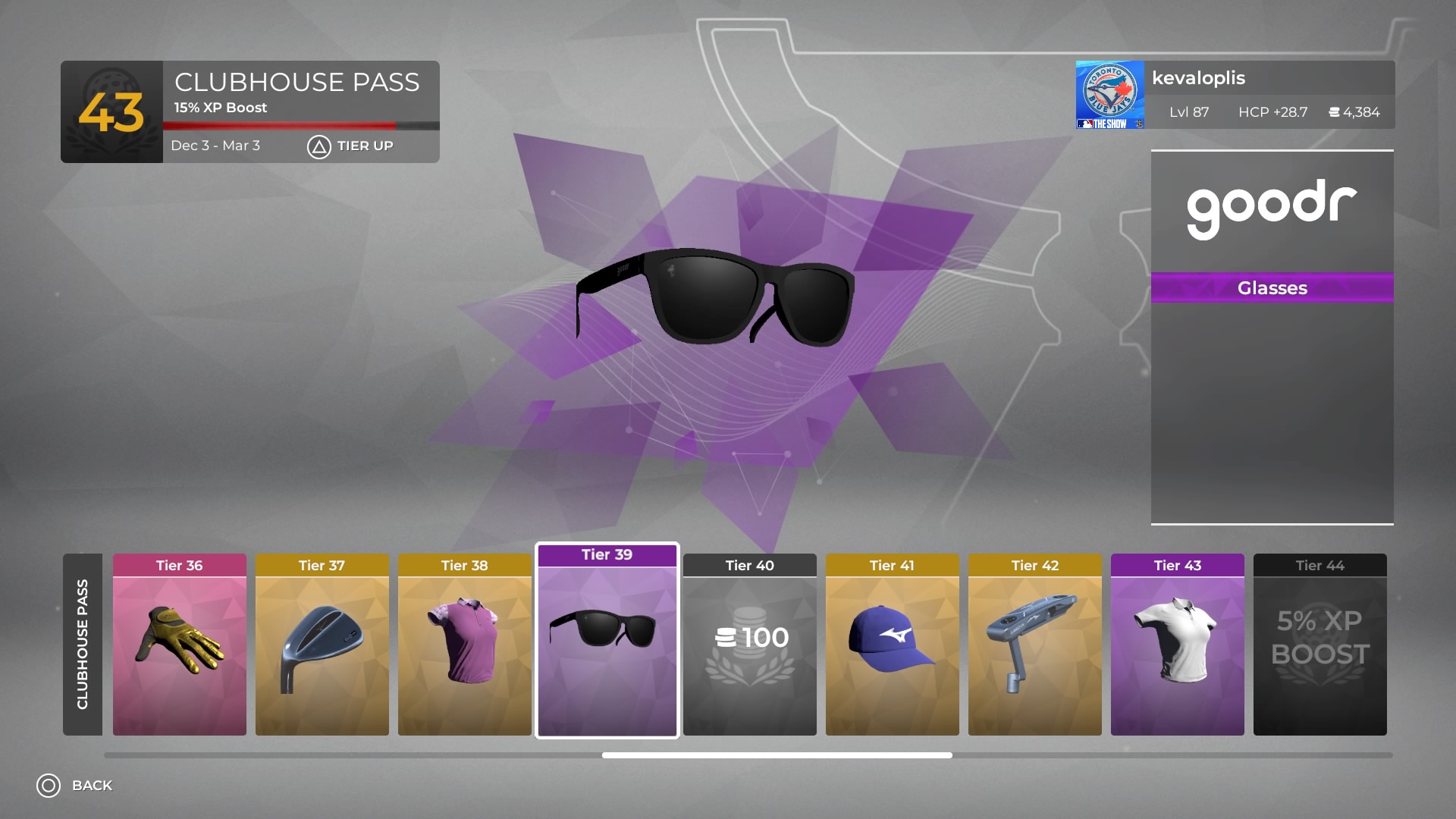 Of course, the natural inclination is to be skeptical of all microtransactions in games, especially when they’re part of a 2K title, but it’s important to note that all of the items available from the Clubhouse Pass are largely cosmetic in nature. Yes, the clubs you can unlock might improve your game, but they still adhere to the same balance of all clubs in the game, meaning they come with their own pros and cons. There are also a few tiers that will earn you 100 coins (hardly a fortune) and others that will get you a welcome 5% XP boost. Unlike NBA 2K’s progression system that forces you to either spend some cash or play a whole lot in order to have the kind of attributes needed to be competitive, PGA Tour 2K21 still has no attributes that can be boosted. PGA 2K still requires you to become elite through the tried-and-true method that real professionals use: practice.

So are these items that you unlock with the Clubhouse Pass actually worth plunking down some real money to obtain? That probably depends how much you value the customization component of the game and how much of a completionist with these things you want to be. Admittedly, without any sort of upgrades to actual skills to be achieved, there really isn’t much else to make yourself stand out other than your appearance and clubs. As such, there’s no better way to show that you are a true hardcore player of the game than to turn up on the course decked out with some of the final rewards of the Clubhouse Pass, which means rocking solid gold pants and shirt with a pink flamingo putter sticking out of your bag.

It’s fair to say there are some ways that PGA Tour 2K21 could expand upon the customization to make the rewards even more valuable. It’s almost painful to admit it, but they might be well advised to take a page from the NBA 2K playbook and include things like emotes to make golfers even more unique. It would be especially nice to be able to have signature movements or facial expressions for things like intros before tee offs, or after good and bad shots. It would somehow cushion the blow a little after a shanked approach shot to be able to toss your wedge in frustration or even just make some sort of custom pained grimace. If they’re looking for inspiration, the World of Chel progression system in NHL 21 is another one they might want to attempt to emulate for this kind of thing as they look ahead to the future of the series.

As it stands now though, the Clubhouse Pass is a relatively cheap add-on that will land you some pretty nice gear if you’re someone who plays PGA Tour 2K21 regularly. That being said, the rewards aren’t really ground-breaking enough to make this a must-have for more casual players.