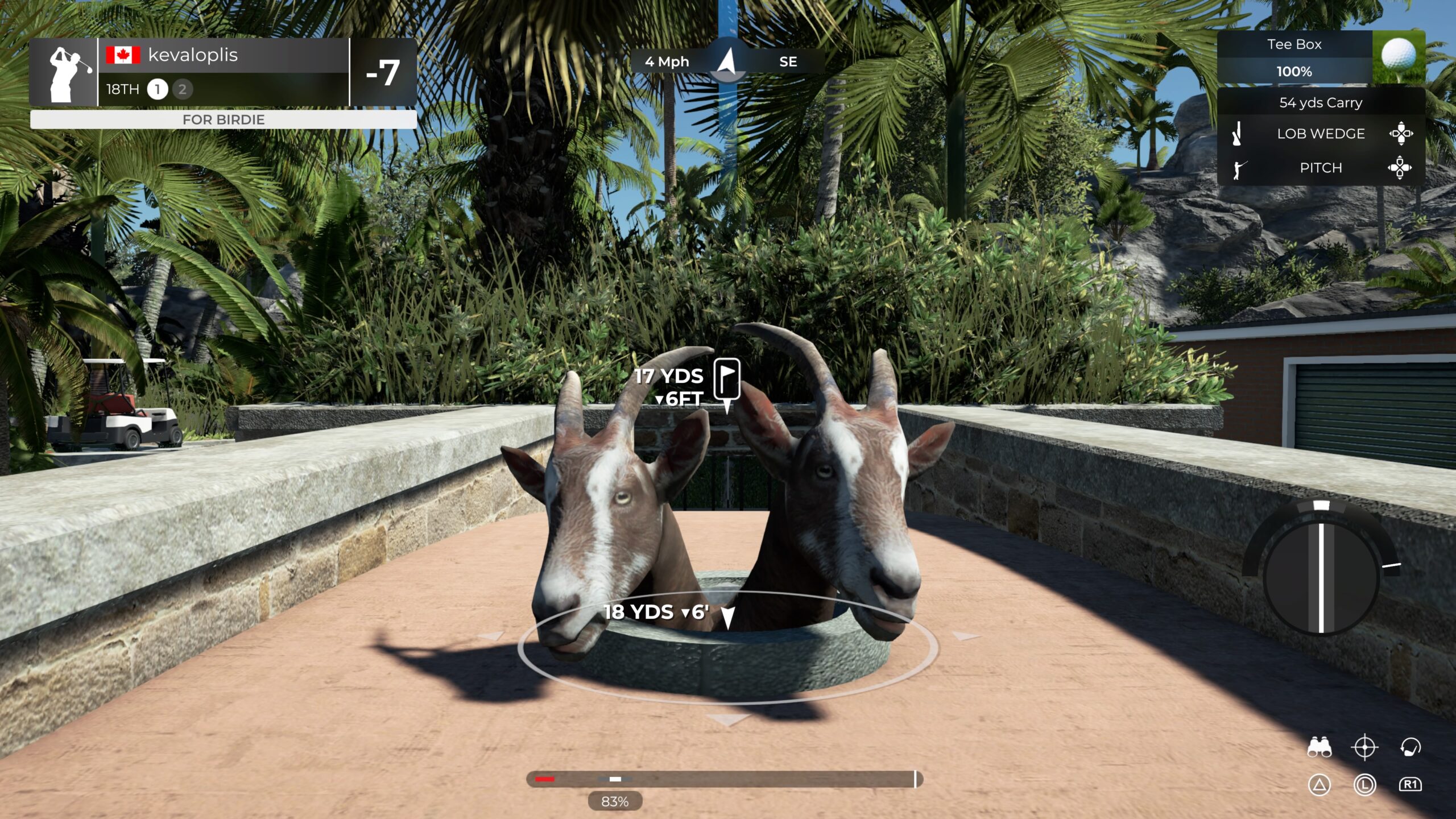 Without question, there’s no shortage of courses to peruse and play in PGA Tour 2K21. Between the handful of official real-life courses that have been faithfully recreated in the game by developers, and the thousands upon thousands that users have designed on their own, the available options are staggering. Whether real or fictional, most of these courses are the kind of lengthy challenges that, outside of a video game, would greatly benefit from a golf cart so you can traverse from one shot and hole to another. Thankfully, there are some designers who have decided instead to focus on bringing to PGA Tour 2K21 a mini-golf experience.

Even though PGA Tour 2K21 doesn’t have any official mini-golf courses, and its course designer doesn’t really include any elements that have been specifically made to be incorporated into mini-golf courses, that hasn’t stopped users from getting creative about how to use items (and creatures) to build some fun layouts. You won’t find any of the typical windmills or holes where you have to hit the ball through an opening in some animal sculpture’s mouth, but the best designs get innovative about how to use things like doors, ramps, and walls to generate some of the same kind of wacky fun that you would expect from putt-putt. 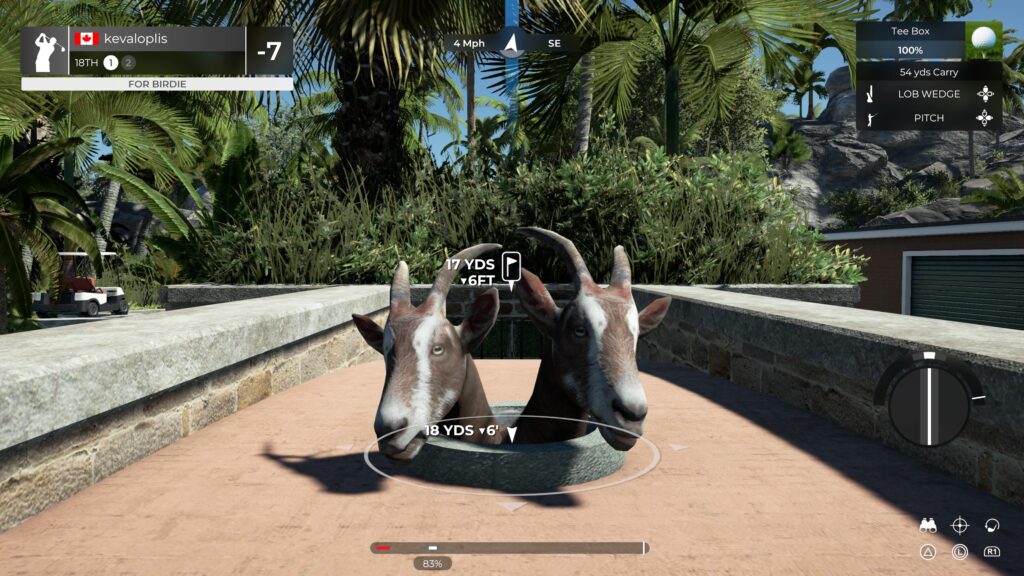 By forcing you to worry about adding the right amount of strength on a putt to generate the proper angle from a ricochet against a wall or how to play an extreme slope near the hole, these courses almost turn PGA Tour 2K21 into a whole different game that requires a separate set of skills to master.

Naturally, not all mini-golf courses are created equal. Some take the wackiness a little too far and have holes that become frustrating and almost unplayable. Others might have the opposite problem and skimp on the obstacles and whimsy as they risk becoming too much like a glorified practice putting green. The cream of the crop find a way to strike the right balance between these two extremes by making a course that’s fair with a dash of the fantastical.

Here’s a list of some of those that expertly walk that line and elevate the careful arrangement of obstacles to an art form. For each of these, I’ll outline the overall aesthetic, highlight some of the standout details, and then choose my own favorite hole from the course. 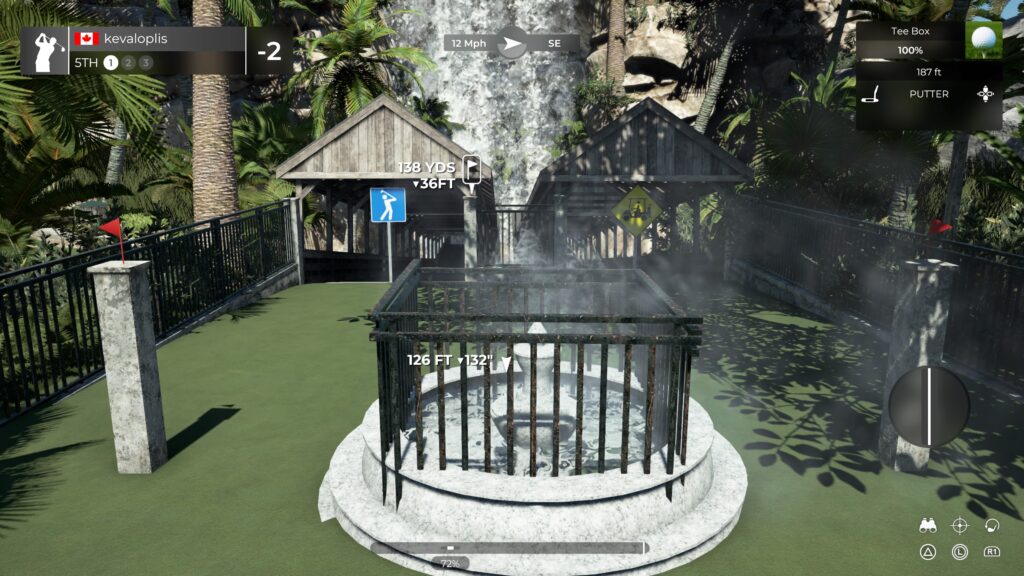 Distinguishing Features: There’s a reason why people play this course so often and that’s mainly because it’s simple and straightforward in the layout of its holes while providing plenty of eye candy in its details. It’s appreciated that most of the holes are fairly hard to mess up for even the most amateur players too thanks to the way the slopes so often guide the ball in such a way that it’s almost preordained to end up somewhere close to the pin. The obstacles though are situated in such a way that they inject a healthy dose of unpredictability to the mix, particularly on a hole where your shot slides down a steep incline only to have to negotiate a group of pyramids prepared to send your ball any which way. Also, am I crazy or is the car embedded in the scaffolding on hole 13 a clear reference to Happy Gilmore?

Best Hole: Hole 5 gives you the opportunity to watch your ball take a long journey while careening down two different bridges, including a ride down one of two large wooden ones built under a waterfall in a moment that’s bound to be a highlight of every round you play on this course. 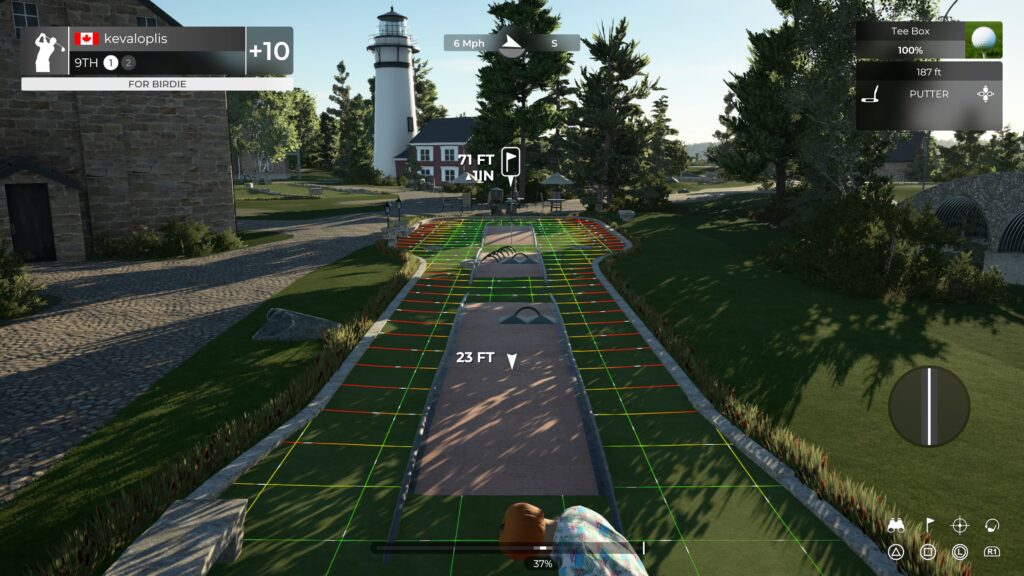 Overall Aesthetic: Heavy on brick, with lots of low walls and snaking greens that read like puzzles in need of solving.

Distinguishing Features: The course takes full advantage of the fact that balls in the game can actually travel through doors by having several holes that require you to use your imagination a little as you send a ball through a structure as if it actually had an opening instead of a closed door. There are plenty of extreme slopes that need to be navigated with caution because too little force will see your ball come right back down the hill at you while too much force will see your ball travel to an unfortunate part of the green far from the hole. Since the majority of obstacles like fountains and columns are made of rock, it’s fitting to find one hole that requires you to navigate a whole field of stones surrounding the hole.

Best Hole: Hole 9 is simple but effective in both its conception and execution, challenging you with a series of rings and stone bridges that will punish you should your initial shot veer too far one way or another, possibly requiring a couple of shots to get back on track. 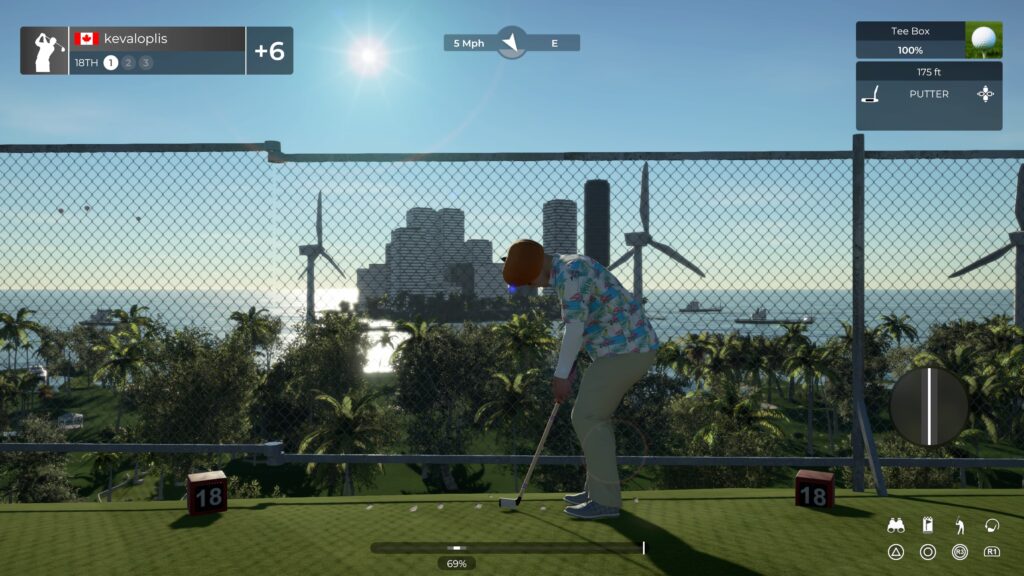 Overall Aesthetic: True to its name, Paradise Cove Mini Golf has a tropical feel complete with lots of palm trees scattering the course and plenty of views of different kinds of boats sitting in the water near holes.

Distinguishing Features: For whatever reason, a lot of the tees on this course have been placed to have you begin holes by hitting a shot that goes under a fence. There’s more distance here than you would typically find on a mini-golf course, as you’re expected to cover a lot of ground with shots that either ride slopes or hug walls perfectly. If you fail to do this properly, you’ll find yourself with some awkward angles to the hole that could cause you to be reaching for a wedge of some sort when patience wears thin (especially when your ball lies in the rough). A number of the pins are situated in funnels, which makes it really easy to get close to the hole, or on platforms, which get old real quick when you keep going up one slope and then down again on the other side when it’s even slightly too strong. Similarly, I could do without the pins that are surrounded by three large rocks that are difficult to penetrate without taking a few cracks at it.

Best Hole: Holes 17 and 18 are both pretty enjoyable, as the former sees you sliding your ball through a narrow corridor with waterfalls raining down on it from both sides, and the latter has you attempting to send your ball down a steep cliff so that it can hit a jump and then land in a funnel-style green some yards from the jump. 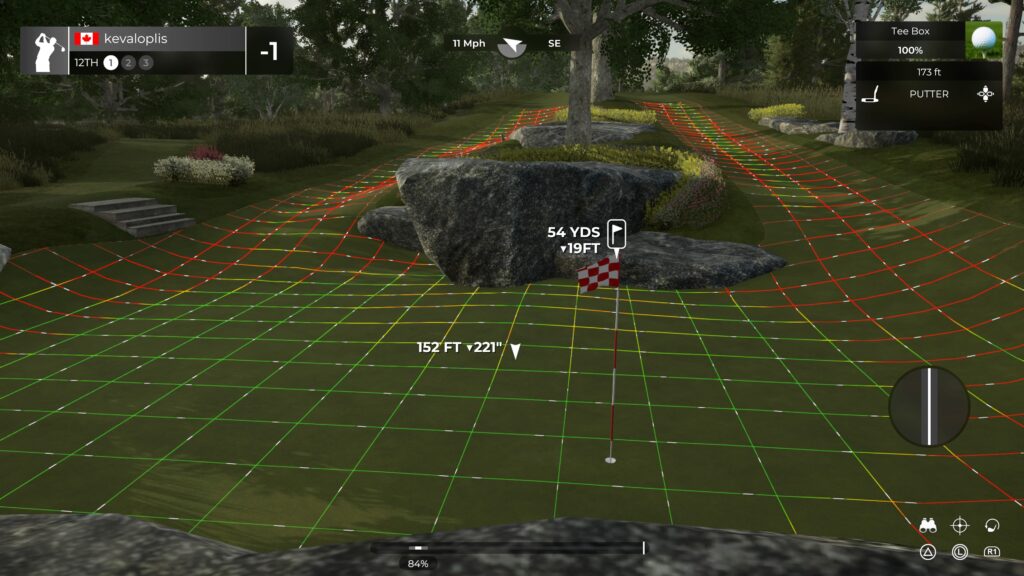 Overall Aesthetic: The fifth and latest in a series of mini-golf courses by the same designer, this sequel is as polished as you would expect by this point, with its holes lovingly crafted in the middle of the woods as a great way to escape from people and the everyday grind of life.

Distinguishing Features: The course establishes its tone right off the bat with a first hole that tasks you with putting your ball down a long slope to try to hit a small jump at the bottom that will propel your ball towards the hole. Many holes follow a similar formula, seemingly upping the ante with each new long and winding slope that will helpfully lead you without fail to the pin. This is thanks to a lot of perfectly placed large rocks along the fairways that ensure your ball gets to where it needs to go when it bounces off of them. It’s also appreciated to see signs at the tees pointing you in the direction of the green because, as with most mini-golf courses, it can be confusing at the outset to even know which way you need to hit the ball.

Best Hole: Perhaps taking inspiration from the Robert Frost poem “The Road Not Taken,” hole 12 has two fairways diverging in the woods instead of roads, allowing you to choose which of the slopes you would like to choose as your fate. Either way, you need to hope for a good carom off the rocks at the bottom that will leave you close to the pin for your second shot. 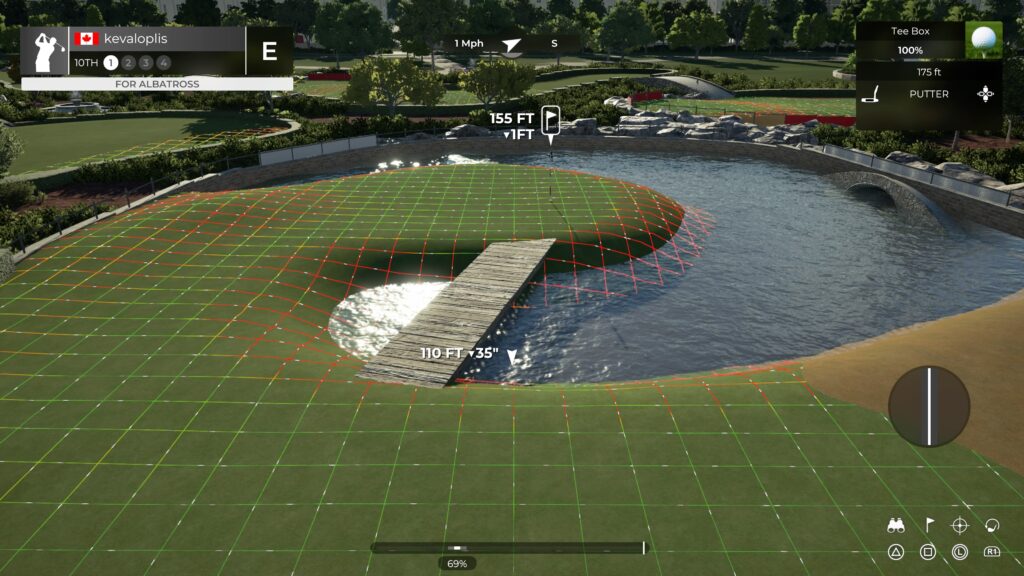 Overall Aesthetic: One of three different Wunderpar mini-golf courses alongside ones in Munich and Glasgow, this layout is ostensibly situated in Paris, and glimpses of the city can be seen by surveying the buildings that are visible outside the grounds of the course.

Distinguishing Features: A more challenging course in which the holes don’t always have helpful slopes to guide the ball directly to the pin, you will be required to actually use some putting skills here. This is complicated further by the fact that a lot of the holes are rather lengthy too, often forcing you to use full power on your putts without much margin for error to have them drift one way or another. There are also patches of brown fairway dotting the greens, which function for all intents and purposes as a hazard just like a bunker in causing the ball to get slowed down on the way to the pin. On certain holes, you’ll have to contend with crossing stone bridges that are not always placed at an ideal angle to get your ball to get to the other side.

Best Hole: Hole 10 presents you with an interesting dilemma where you can choose to either cross a bridge placed at one of those aforementioned awkward angles to make that difficult putt, or take the scenic route by playing a slope that will (hopefully) lead the ball somewhere closer to the hole.