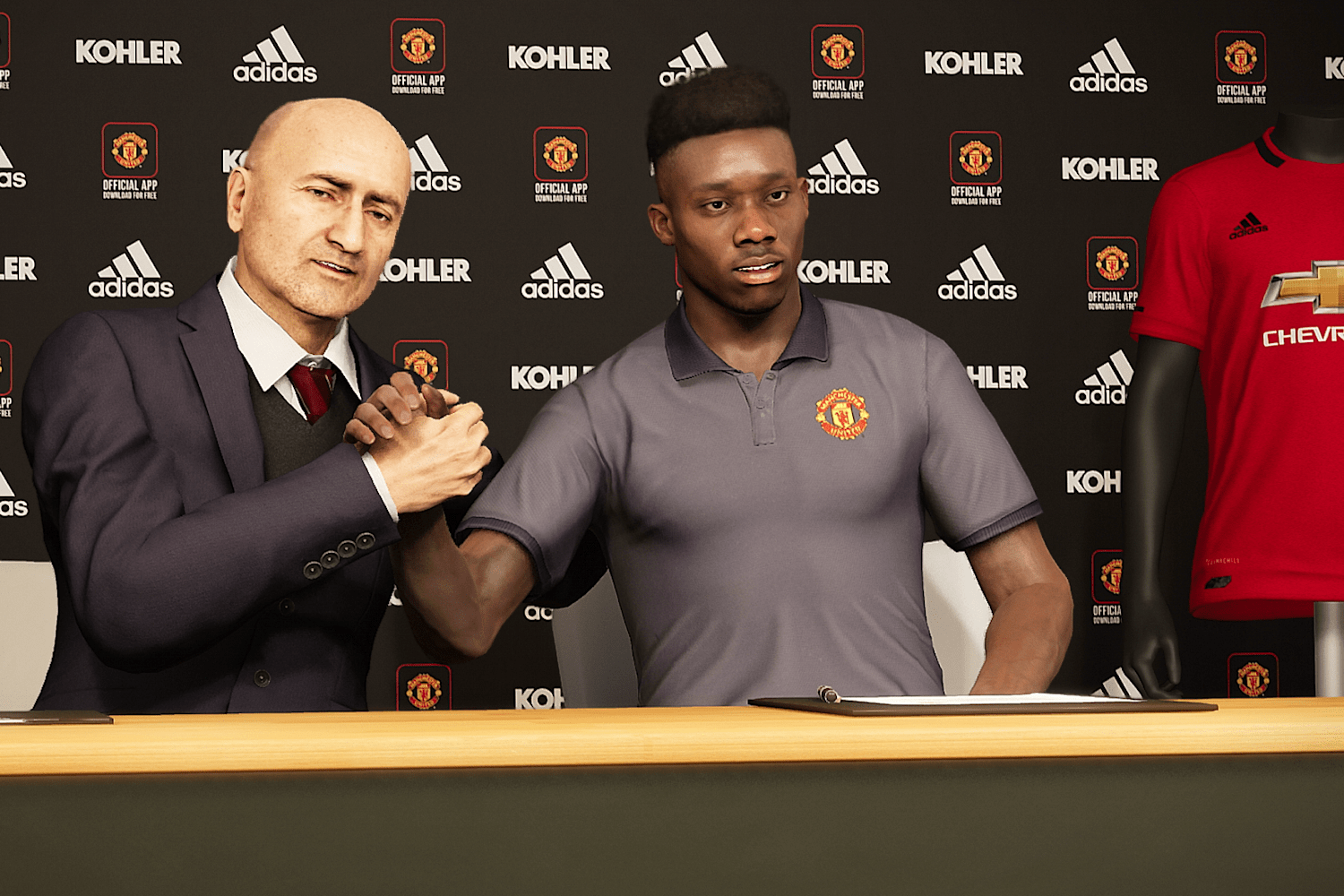 One of the most important aspects on any team, regardless of the sport, is team chemistry. A cohesive unit operating as one can be a nightmare for the opposition, often helping to bridge the gap between talented and less talented squads. Leicester City rode the team chemistry wave all the way to a Premier League title in 2015-16. When it comes to PES 2021, team spirit (chemistry) is a vital component of both MyClub and Master League. In this PES 2021 team spirit guide, I’ll discuss team spirit concepts, how it affects your squad, and how to avoid some common pitfalls that come with lower team spirit. 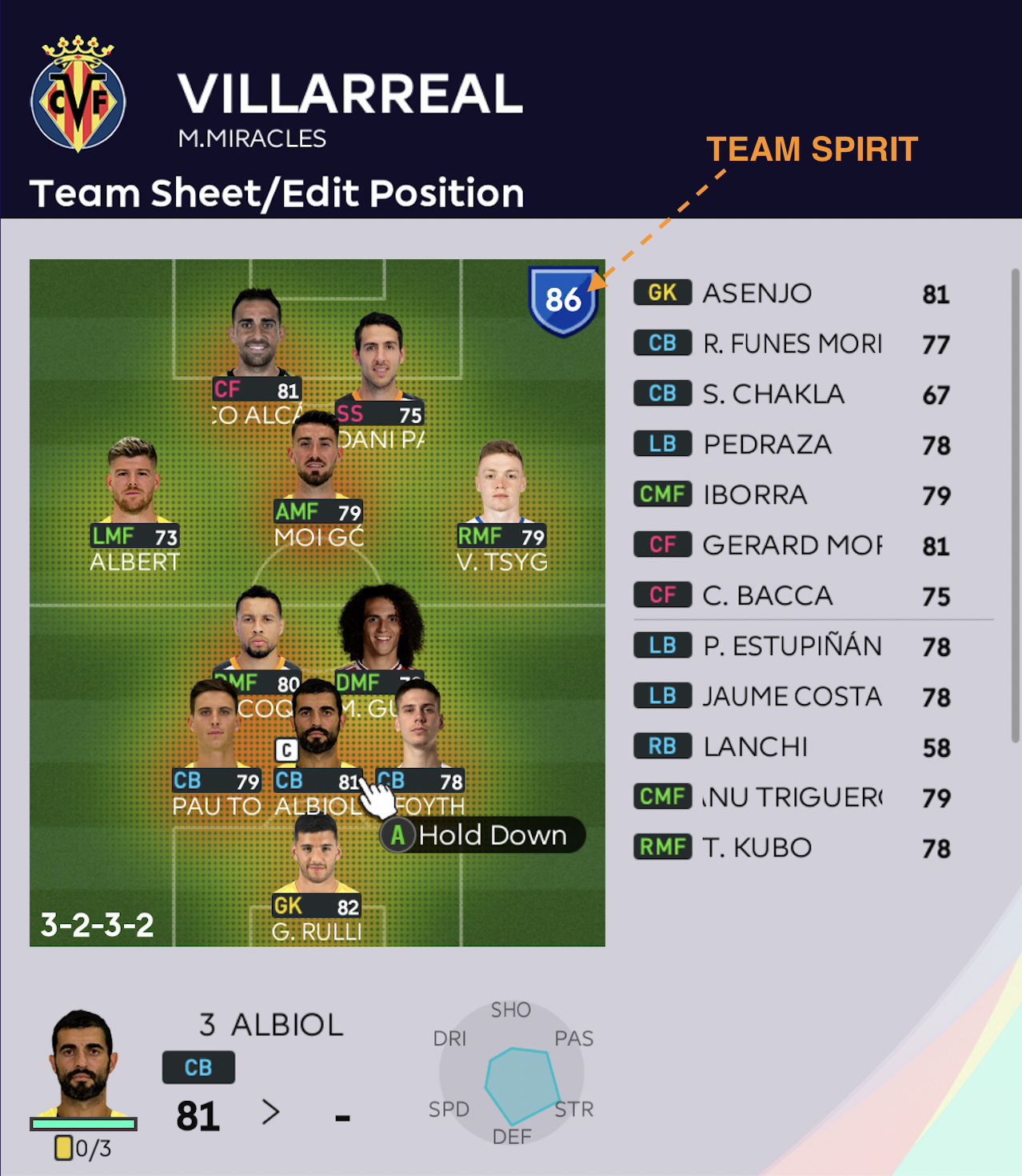 What is Team Spirit?

According to Konami, team spirit is:

An overall indication of a group of factors, including a manager’s suitability to your squad, each of your player’s positional suitability, and mastery of team instructions as well as your current Preset Tactics (both main and subs).

With a maximum value of 99, team spirit plays an integral role in how your team performs on the pitch in eFootball PES 2021. The higher your team spirit, the better “teamwork” you have. Better teamwork leads to your players knowing where each other are supposed to be on the pitch, both in attack and defense. Additionally, high team spirit will see your players follow your instructions better (Advanced Instructions or overall tactics). This usually leads to better results as overcoming low team spirit is hard, albeit not impossible. Team spirit isn’t static, meaning that it can increase or decrease as you progress through the season and/or seasons.

Now that you have a basic understanding of team spirit, let’s look at the variables that contribute to it.

What Variables Contribute To Team Spirit 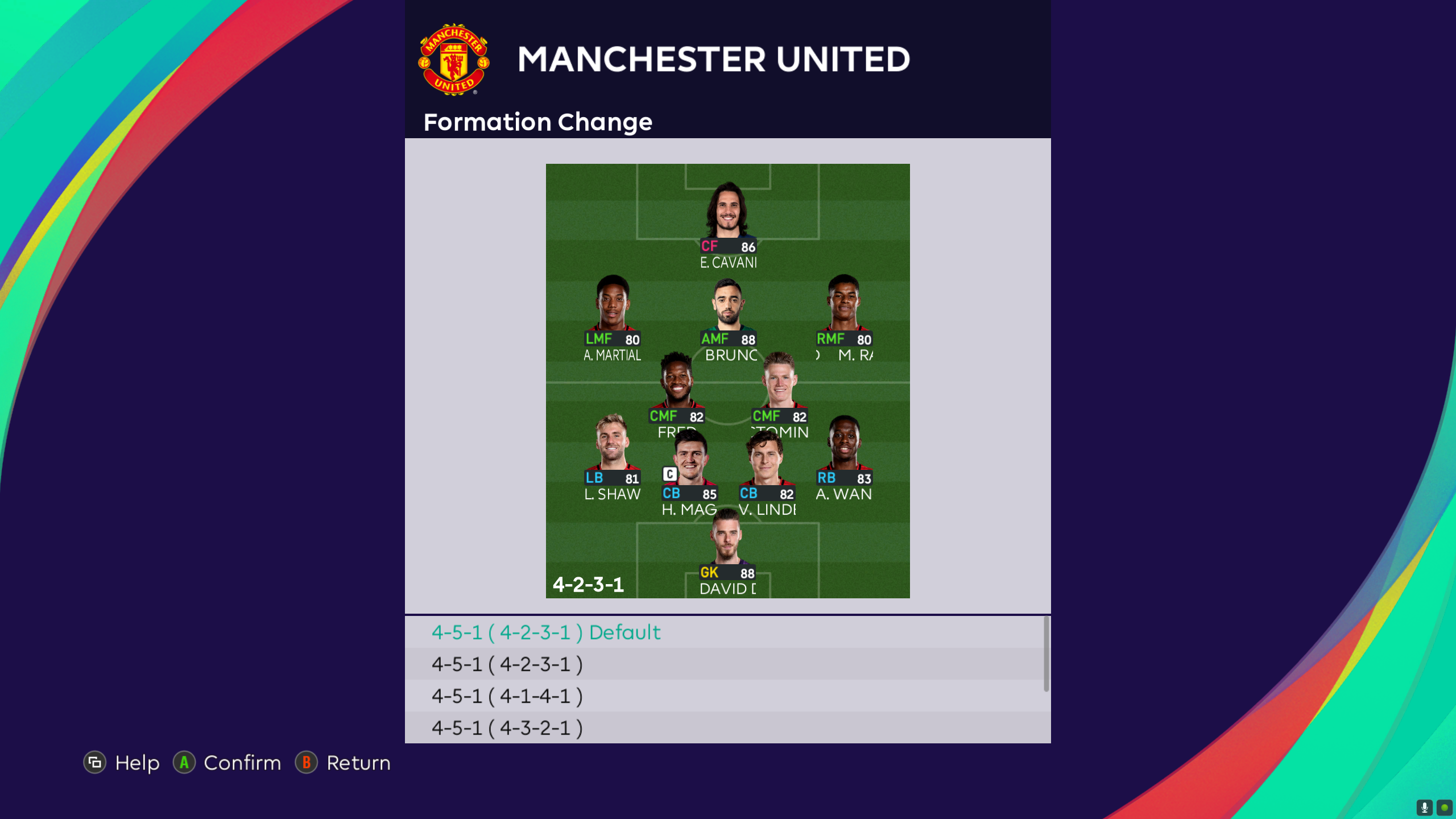 Seems obvious, right? Constantly switching players breeds unfamiliarity with each other and you as the manager. While it’s hard to settle on your best 11, doing so as fast as possible will reap huge benefits when it comes to team spirit.

There’s a reason why managers and players pick a captain and vice-captain at the start of each new campaign. Quickly identifying who your leaders are establishes responsibility and creates a sense of accountability, just as it does in real life. Selecting the right captain (some players have the “captain” trait, if they don’t you can always train them on it) will see increases to your team spirit.

These are the three main components of team spirit. While they’re not in any order based on importance, I would place “captaincy” at the bottom with far more importance placed on your players and formation.

How To Increase Team Spirit 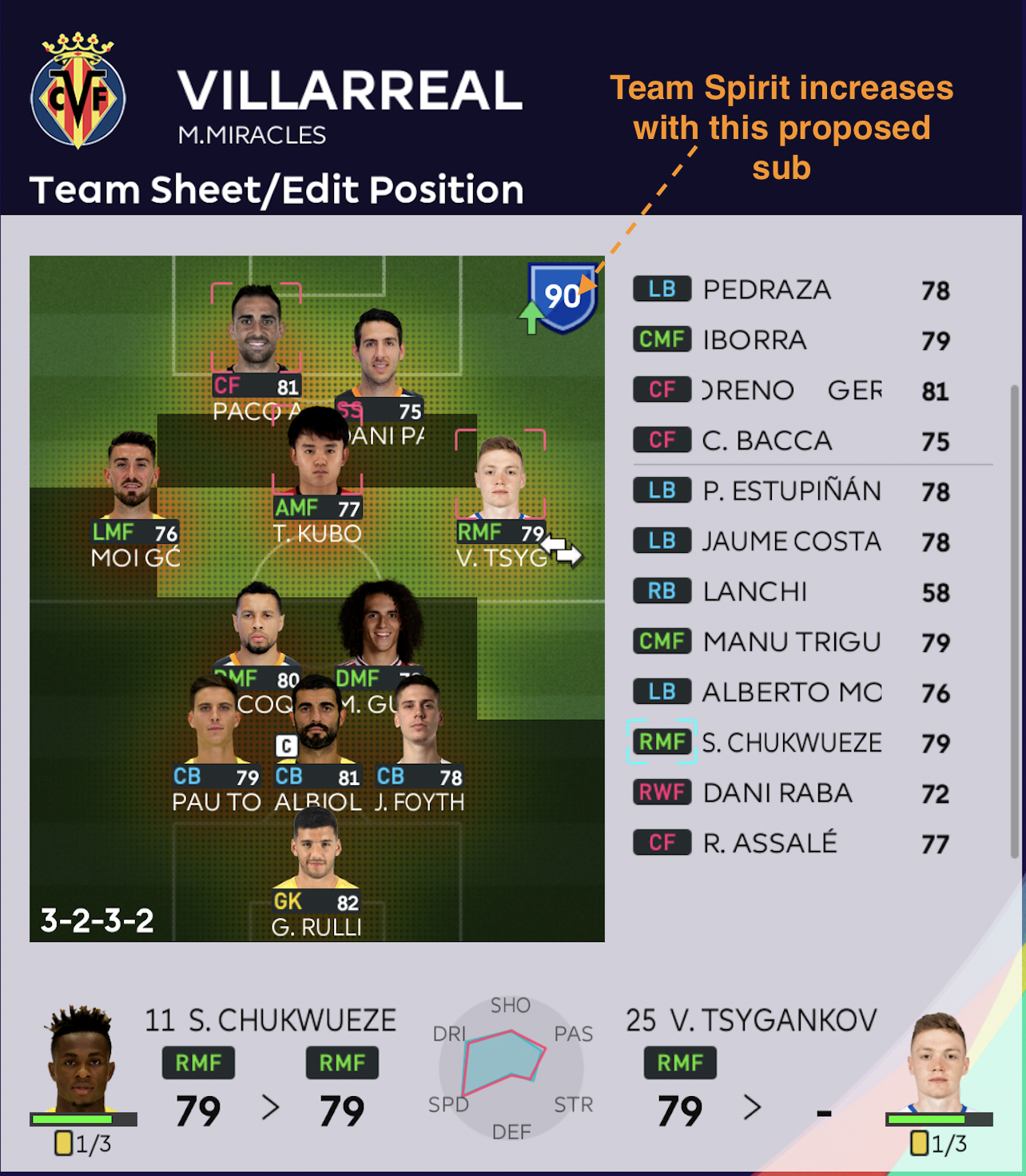 Play Players In Their Preferred Positions

Seems like another obvious one, but playing your players in the positions they are naturally suited towards will provide instant benefits. Moving your striker to goalie will result in a lowered overall for your new keeper, and your team spirit will take a nose dive as your players will lose confidence knowing someone is playing out of position. More subtle moves like swapping sides for your wingers won’t lead to as dramatic of a change but will still often result in a couple team spirit points being dropped.

Decide On One, Maybe Two Formations

Typically, I like to have a default formation with a backup to deal with things like fixture congestion and injuries/suspensions. This sense of stability helps to settle players with where they’re supposed to be on the pitch and what sorts of actions are asked of them. Settling on a formation and the tactics for that formation is vital to creating consistency within the squad. Furthermore, adding new players to the squad that slot into your formation, as well as complement your tactical style, is a surefire way to ensure that you’re team spirit remains high.

Decide On Your Preferred Starting 11

Of all the ways to increase/maintain a high team spirit, this one is perhaps the most difficult. Depending on the squad, sometimes it’s easier to settle on your preferred starting lineup than others. Top clubs like FC Barcelona and Liverpool make life easy for the manager when it comes to picking your best 11. Take a few steps down the managerial ladder and you’ll find decisions like this much harder. PES does a nice little trick of pressing R3 to let the CPU auto-pick your best 11, but where’s the fun in that? Throw in random form arrows and your starting 11 decisions aren’t always cut and dry.

If you’re a tinkerer, then you’re in for a rude awakening in PES. While it’s often hard to decide on which formation to use, the times where you try different formations out will have your team spirit going up and down like cryptocurrency. More often than not, the default formation will usually see your team spirit increase at a much quicker pace, but it’s your game and it’s your decision as to how you want to apply your managerial stamp. If you can, it’s always best to keep the tinkering to a minimum — or at least confined to matches that don’t carry as much importance.

When you’re picking your starting 11, it’s important to maximize your players’ best attributes. You wouldn’t want to put your attackers in defensive positions and vice versa. PES punishes you in this regard on two fronts. First and foremost, the ratings drop as your striker has the skills to put the ball in the back of the net but doesn’t have the ability to prevent the other team from doing so. Secondly, your team spirit will nosedive as your teammates will know that your striker is not a defender and vice versa.

As mentioned previously, swapping sides for wingers won’t cause your team spirit to suffer too much, but a general rule of thumb when it comes to PES is seeing which position(s) your players excel at after you click on them.

This is a tricky one because we all know how much fun it is to play in the transfer market. Buying new players and refreshing your squad is one of the most fun things to do in soccer games. However, in PES it comes at a huge risk. Just as it does in real life, buying and incorporating new players into the mix is a delicate process and it’s never one size fits all. Buying a player in January will give your new player less time to acclimate while simultaneously giving your teammates less time to adjust to this new player.

I’ve had numerous January window buys over the years start out as busts only to see them improve the following season. Picking your moments on when to insert new players takes guile, smarts, and a bit of luck. Time to jell is a must!

There are a lot of “under the hood” factors that go into PES‘ gameplay. Player ID, traits, and team tactics are a just a few ways gameplay is affected. In order to see how team spirit functions, you would need to conduct a science-like experiment where you keep things consistent (establishing a baseline) and slowly adjust the variables (players, formations, etc.). Fortunately for us, no one has time for that! Thankfully, there’s this helpful short video that details how team spirit, both high and low, affect your gameplay.

Even though it’s technically for the “mobile” version of eFootball PES 2021 Season Update, the same fundamentals apply to the full game. 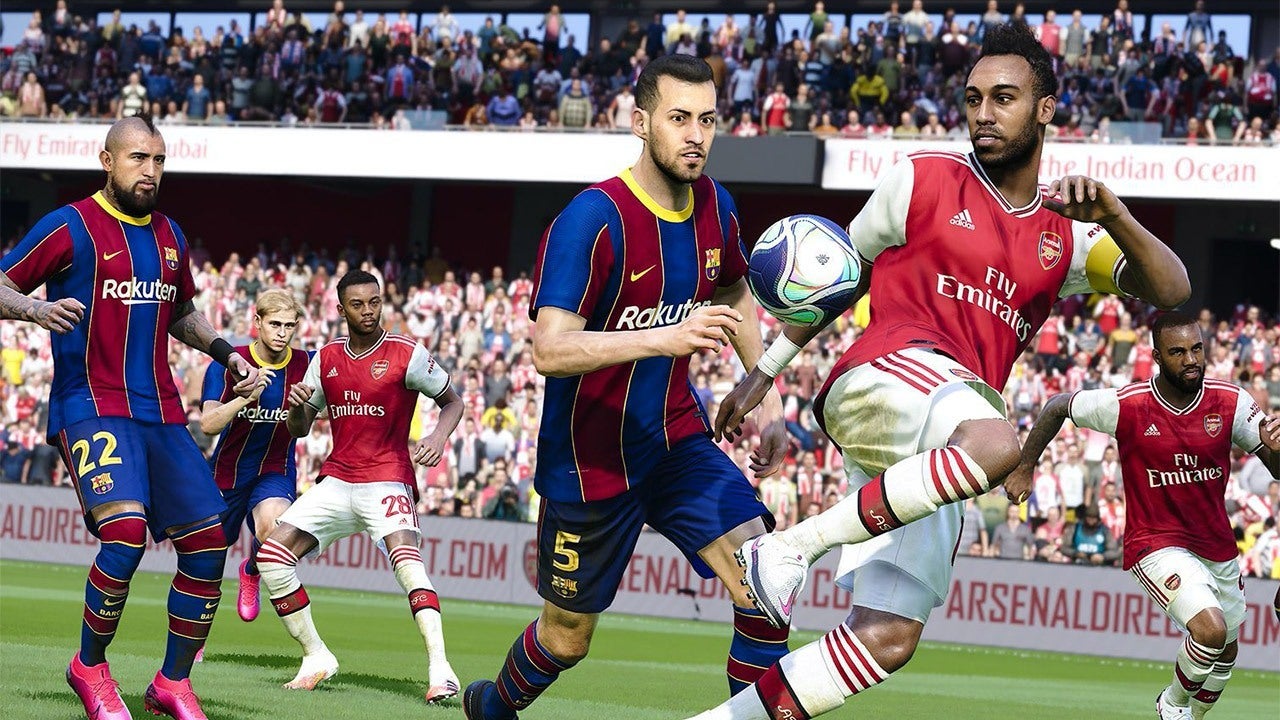 When it’s all said and done, team spirit is one of the most important factors that contribute to either your team’s success or failure. High team spirit usually correlates to success, so the faster you reach a high team spirit number the better. Sure, it takes time to come to grips with your team, especially that first year, but it’s no different than what you would expect if you were a real-life manager.

In other words, take your time. Learn your players. See what their strengths and weaknesses are, addressing said weaknesses through training. Come to grips with your formation as early as possible, slowly add pieces in the transfer windows, and slowly incorporate these new players in your squad so as not to disrupt the dynamic in the locker room. Follow this PES 2021 team spirit guide, and your team will perform at a much higher level.