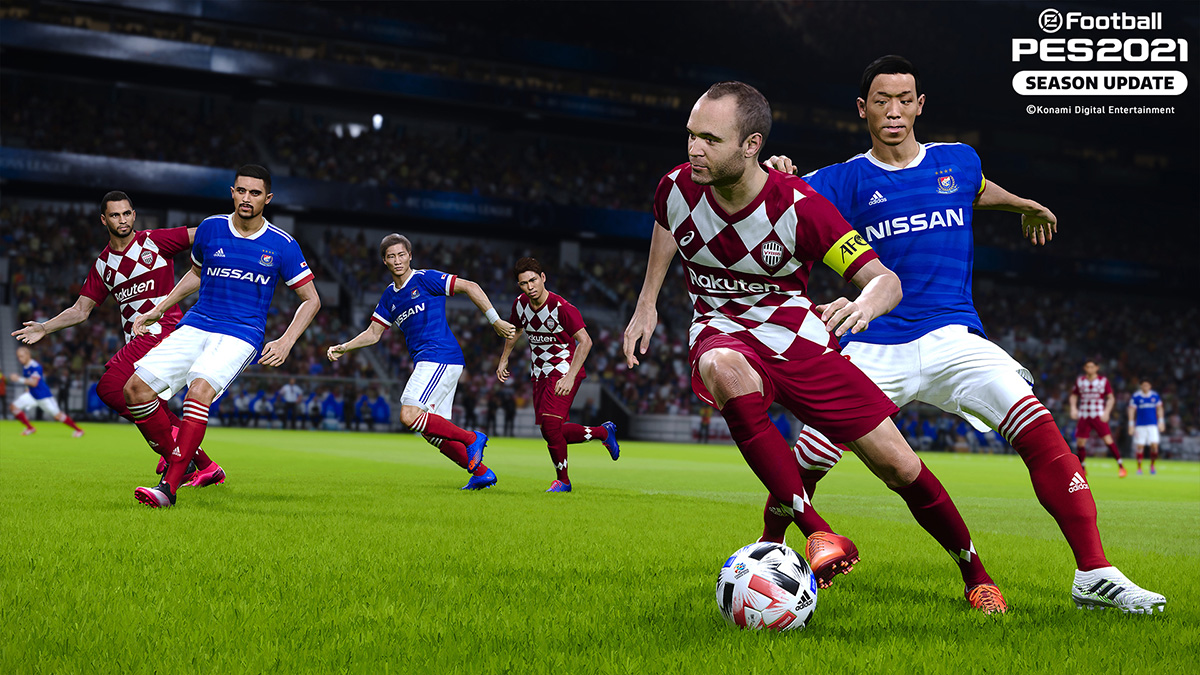 Welcome to the first edition of the Tactics Room where we will be tackling PES 2021 anchoring strategy. This will be the first in a series of articles aimed at helping to explain some of the intricacies of PES 2021, specifically when it comes to tactics. If you’re unfamiliar with PES or new to the sport, tactics are simply:

“An action or strategy carefully planned to achieve a specific end. In a football context, tactics can be described as how a team manages space, time and individual actions to win a game.”

Tactics in PES play a vital role in implementing a particular style or game plan to get the most out of your players. PES 2021, in all its glory, can get a little overbearing when it comes to tactics. When to apply them, what to apply and so on are all questions you’ll ask yourself over the course of a match, so hopefully this series of articles helps you when it comes to the tactical side of the game.

For this first article, we’re going to tackle the advanced instructions menu. For those unaware of what advanced instructions are, they are a set of preset tactics found on the “gameplan” screen. These preset tactics help to execute strategies in both attack and defense. With roughly 15 options to choose from, you can select up to four at a time (two for both attack and defense) while also mapping them to the D-pad. Activating these in the match is as simple as pressing “L2 + D-pad direction), and by doing so you’ll see a small text notification when they’re activated.

Now that we’ve got that sorted, let’s jump right into the focus of this blog: anchoring.

“Selected player is restricted from drifting out of position horizontally. For example, your centre forward will keep to a central position, and your wingers will not venture inside.” 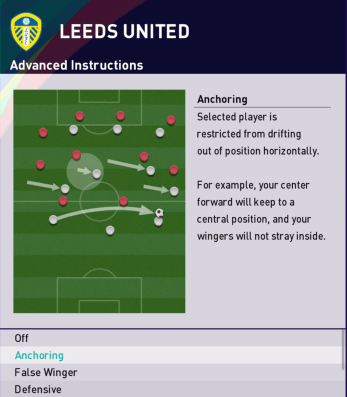 The biggest benefit from anchoring is that it keeps your striker central so that a player is always in the middle of the pitch. On the surface, this seems like a predictable attacking approach that is easy to defend, but it also ensures that your striker will always be in a central area. This allows you to have outlets against high-pressing teams and a target for crosses. With your wingers staying wide, this formation will keep center backs honest and occupied, and is ideal for whipping in crosses for your striker. 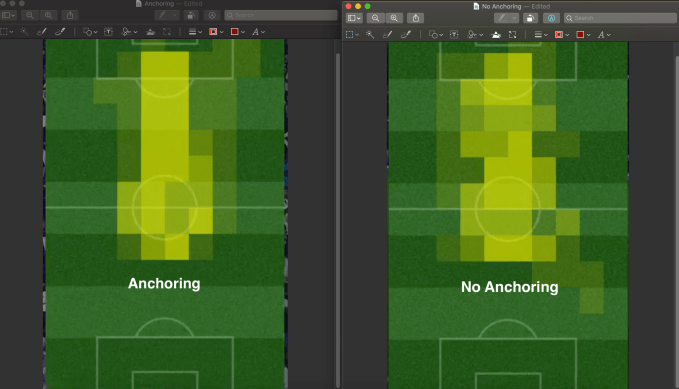 As you can see from the above heat map, a player with anchoring on tends to stay more central, as evidenced by the darker yellow squares. When anchoring is off, the same player will drift a little wider and enter the half-space (the area to the immediate left/right of the center).

The biggest con for an anchor-based approach is that your striker will stay central even if there is space to exploit out wide. No matter what formation you face, you’ll most likely encounter defenders in the middle of the pitch, meaning that it can get a bit crowded centrally and you might not have a lot of time on the ball, so you’ll have to react quickly. Your wingers might drag some defenders out wide but you’ll most likely need some support from your midfielders in attack.

What Formations Work Well With Anchoring? 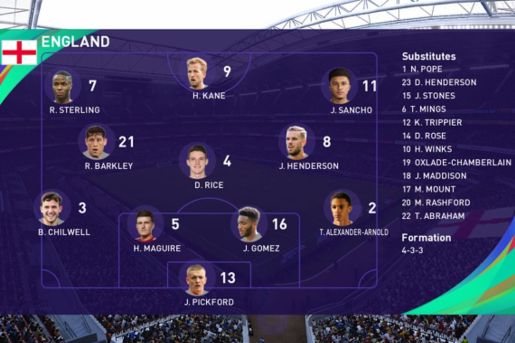 The formation I’ve had the best success with is the traditional 4-3-3. With two wingers, you will be able to send in crosses, and if there is support from the midfield, you’ll have enough in attack to score some goals. Another formation you can try is the 4-4-2. By setting one of your strikers to “anchoring” and allowing the other striker to roam, you can create some havoc, especially against teams that defend with a more traditional four at the back.

Anchoring plays really well with good link-up players, allowing you to play quick 1-2s. As a personal preference, I like to pair my strikers in the 4-4-2 with contrasting strikers. This means one stronger/bigger attacker who’s more adept with his back-to-goal, with a more mobile and quicker attacker who possesses strong dribbling skills who can possibly get behind the defense.

What Happens When You Combine With Other Advanced Tactics?

Since you can assign two advanced tactics when in attack, there are a few other tactical options that you can pair with anchoring to get the most of out of your attack. The obvious tactic that pairs with anchoring is the centering targets tactic. Centering targets forces your forwards into positions in front of goal for crosses. As well as these two go together, there really isn’t a need for both as your striker will already stay central.

Attacking fullbacks also seems like an obvious choice, but that negates your wingers from staying wide as your fullbacks will push forward and possibly crowd the space occupied by your wingers.

Instead, thinking outside of the box, I prefer the false fullbacks tactic when attacking aggressively. If you witnessed Pep Guardiola’s time at Bayern, you’ll remember him perfecting this approach by turning fullbacks like Philipp Lahm and David Alaba into midfielders when in attack. Now, you’ll need fullbacks who are comfortable on the ball with this combination, but what it will do is give you more options and numbers in attack. Just be careful though as this opens up the wings for counter attacks.

Typically, you’ll want “advanced strikers” or “target men” to lead the line if you select your striker to be the designated anchor (you can technically pick any outfield player you want to “anchor”). Advanced strikers play on the back shoulder of the defender by utilizing their pace to get in behind, while target men are typically bigger strikers who can hold the play up, bringing others into the attack or providing a big target in the box for crosses.

What Players Work Well With Anchoring? 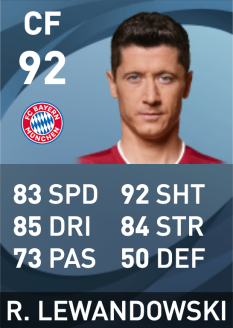 When I select anchoring as an option, I typically gravitate towards a bigger, less mobile striker. While you can use players like the pacey Timo Werner as advanced striker who can get in behind, bigger players like Olivier Giroud are my favorite because they get the best out of PES’ Player ID and can physically dominate smaller defenders in the box.

Because they will stay central, pace isn’t necessarily a requirement so you can squeeze a few more years out of guys like Luis Suarez and Lewandowski, who are on the decline physically. It’s also great to have adept finishers like those two closer to the box where they can exert maximum pressure on the defense.

Big, strong #9’s seem to be a dying breed in modern football so anchoring isn’t a tactic I employ too often. Instead of it being a strategy I use for the entire match, I’ll switch to anchoring when chasing a game or trying to relieve myself against really aggressive teams that use some of combination of “Gegenpress” and/or “frontline pressure” tactics. Occasionally, I will send in crosses if I’m playing with a striker who has the “header” ability. With good crossers and a striker who’s strong in the air, anchoring can be a really good advanced instruction.

What’s been your PES 2021 anchoring strategy, or is this something you have not used much this year?