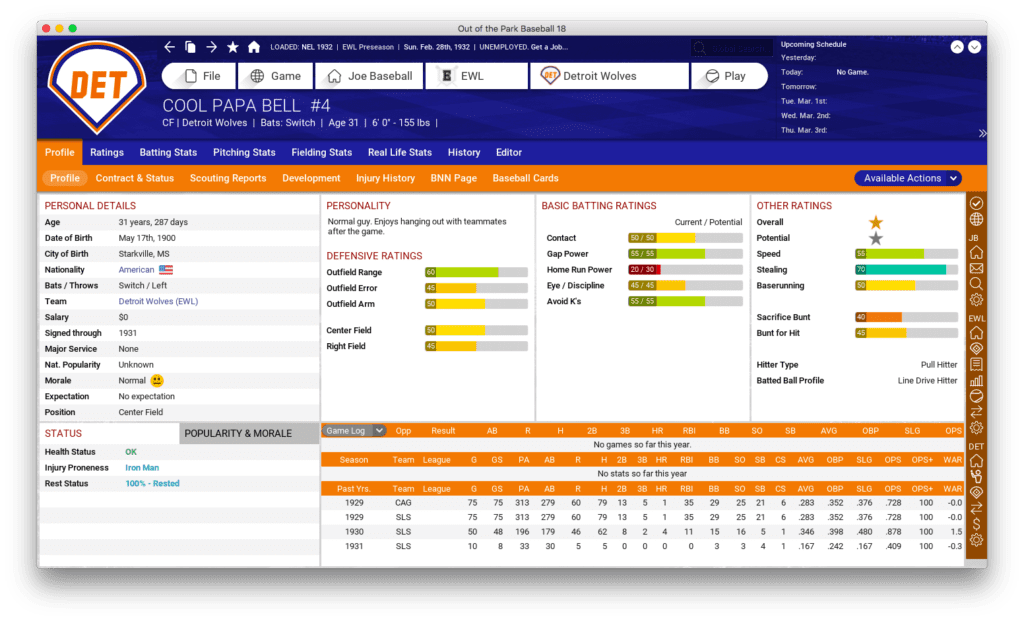 The Out of the Park Baseball 18 development team is hard at work on the game, gearing up for its March 24 release. You can still pre-order it for $34.99, a 10% discount, and receive the Gold Master version of the game on March 20, four days ahead of the worldwide launch.

Every year, the Road to Release series takes a closer look at OOTP’s new features, and this year is no exception. The 2017 edition of Road to Release is kicking off with an in-depth look at the historical Negro Leagues that have been added to the game, much to the delight of many fans.

Baseball fans are well aware of Negro League history, which is full of the exploits of such players as Cool Papa Bell, Satchel Paige, and, of course, Jackie Robinson. It was a dark period for professional baseball, but it also served up a rich history that’s right at home in OOTP 18, where players can rewrite that history to their hearts’ content. Fans have Seamheads.com to thank for this new feature: They struck a deal with Out of the Park Developments for the use of the Negro Leagues data that they had compiled.

When it ships next month, OOTP 18 will feature these leagues and seasons, with more to come in free updates through the rest of the year:

Let’s take a look at those leagues in more detail:

The Negro American League was the home of the well-known Kansas City Monarchs franchise, which was the longest-running club in all of the Negro Leagues and the home of Ernie Banks, Satchel Paige, Jackie Robinson, and others. They won eight pennants and one Negro League World Series during their existence.

Paige also played for a few other teams, including the Birmingham Black Barons, who had Willie Mays roaming center field for them in 1948 and 1949. Another Negro American League team, the Indianapolis Clowns, signed Hank Aaron to his first professional contract in 1952, but he was only there for a few months before MLB’s Boston Braves purchased his contract.

The Negro National League played against the Negro American League in the seven Negro World Series that were held, and the National League representative took the championship five of those years. The fabled Washington Homestead Grays played in five of those World Series and won three of them. Unsurprisingly, the Grays boasted many players who were later inducted into the National Baseball Hall of Fame, including Cool Papa Bell, Josh Gibson, Buck Leonard, and Smokey Joe Williams.

Bell, Gibson, and Paige had all earlier played for the Pittsburgh Crawfords, who were part of the Negro National League before moving to Toledo and joining the Negro American League. The team lasted one more year in Indianapolis before folding, but during their short history, they managed to win a pair of pennants.

The Negro East-West League lasted just part of the 1932 season, folding in June of that year due to financial problems, but it featured the 38-12 Detroit Wolves, one of the strongest teams in Negro League history. The Wolves featured Cool Papa Bell and several other future Hall of Famers, including Willie Wells, Mule Suttles, Ray Brown, and Judy Johnson.

OOTP features different ways to recreate history, including an “on rails” experience that uses historical transactions, such as trades and injuries, and lineups to produce a result very similar to what actually happened. Players can also simulate history without that restriction, which means their digital baseball world will began deviating from history more and more as it progresses through multiple seasons. The end result can be drastically different from what happened in real life.

To try this out, we started a new game in 1932. In real life, the Negro East-West League folded without finishing its season and its players dispersed to other Negro Leagues, but in our alternate reality, the Homestead Grays led the league with a 36-22 record and defeated the Newark Browns in seven games in the championship. The Detroit Wolves finished in third place at 32-26.

As in real life, though, the East-West League vanished after 1933 and the Negro National League reappeared. We simmed forward to see what would happen. (Note that while some Negro Leagues played split seasons, with first half and second half winners, OOTP has them play complete seasons, with a championship series between the top two teams. Given the sometimes messy nature of Negro League schedules, OOTP has to do some simplifying so the game doesn’t break.)

OOTP 18 then continued to march through history. In 1937, the Negro American League opened for business. Meanwhile, Philadelphia clubs dominated the Negro National League between 1933 and 1936: The Stars won three of the four championships and the Bacharach Giants won the other one in 1934, their only year in existence.

We then continued through 1946 – after that season, Negro League players begin signing with MLB clubs. You can break the color barrier any time before 1946, if you want it to fall sooner, but once the 1947 season begins, OOTP 18 allows Negro League players to sign with American and National League teams. After the 1950 season, the Negro Leagues disappear entirely. While a Negro League World Series was held in real life between the Negro American and Negro National Leagues from 1942 to 1948, it doesn’t happen in OOTP 18.

Here are some interesting notes from the Negro Leagues through 1946:

Philadelphia’s dominance faded. The Newark Eagles won five championships between 1939 and 1946 and the Homestead Grays took home a pair of titles. Many single-season records from the league’s pre-1933 existence (OOTP 18 can import all of that when you set up a new game) remained intact, but Bill Hoskins set a record with a .419 batting average in 1940.

Between 1937 and 1946, the Birmingham Black Barons won four championships (1943-1946) and the Chicago American Giants won a pair of titles. Since this was a new league, there wasn’t enough time to build up an interesting batch of records.

You can do more with Negro Leagues in OOTP 18, such as:

OOTP 18 offers many more settings that baseball fans can change to their hearts’ content, creating even more interesting “What if?” experiments, such as an historical replay with tweaked statistical modifiers, so that the pitching or hitting sides of the game are inflated. Or what if some of today’s superstars played during that era?

The possibilities are nearly endless.

Cancel reply
Continue Reading
You may also like...
Related Topics:Negro Leagues, ootp 18, out of the park baseball 18, Out of the Park Baseball 18 Road to Release, text-sim