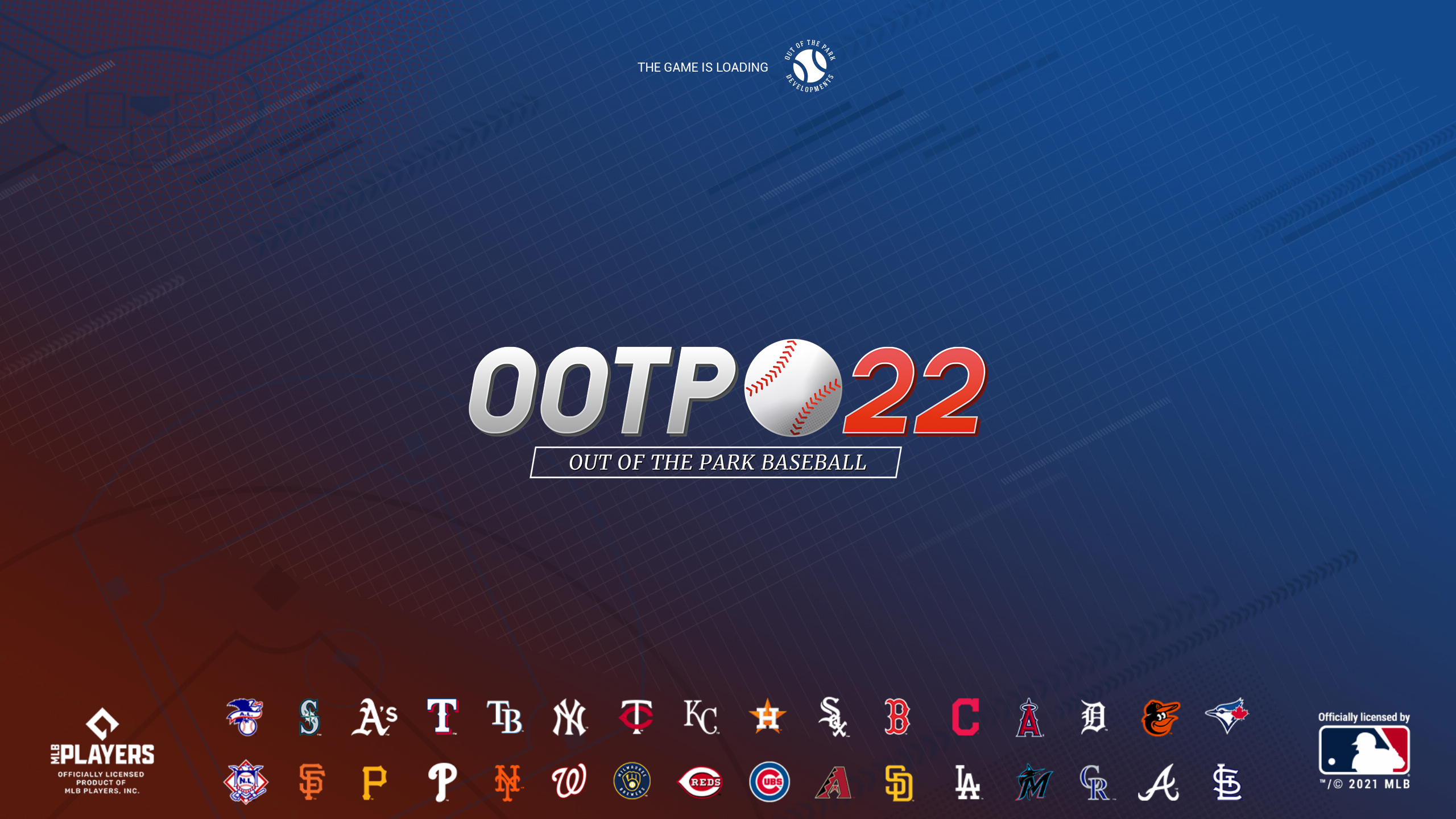 The Out of the Park Baseball franchise has been with us for over two decades now and is part of the baseball gaming lexicon. It was initially only a text-based baseball simulation, but OOTP has now grown into a hybrid title that offers text-based and visual options to watch the action on the diamond. The OOTP series and its developers have been consistent with upgrades and the implementation of “quality of life” changes and improvements over the years, and this year is no different — as I’ll discuss in this OOTP 22 review.

So, what’s new with OOTP 22? Here is what the development team hyped up:

With that out of the way, let’s get into the OOTP ’22 review.

OOTP ’22 does an outstanding job of providing multiple paths for users to experience the game of baseball the way they want. OOTP offers the ability to play the current Major League Baseball season, any season from the past, or international baseball leagues that you may have interest in, including the new KBO license that OOTP has acquired this year. 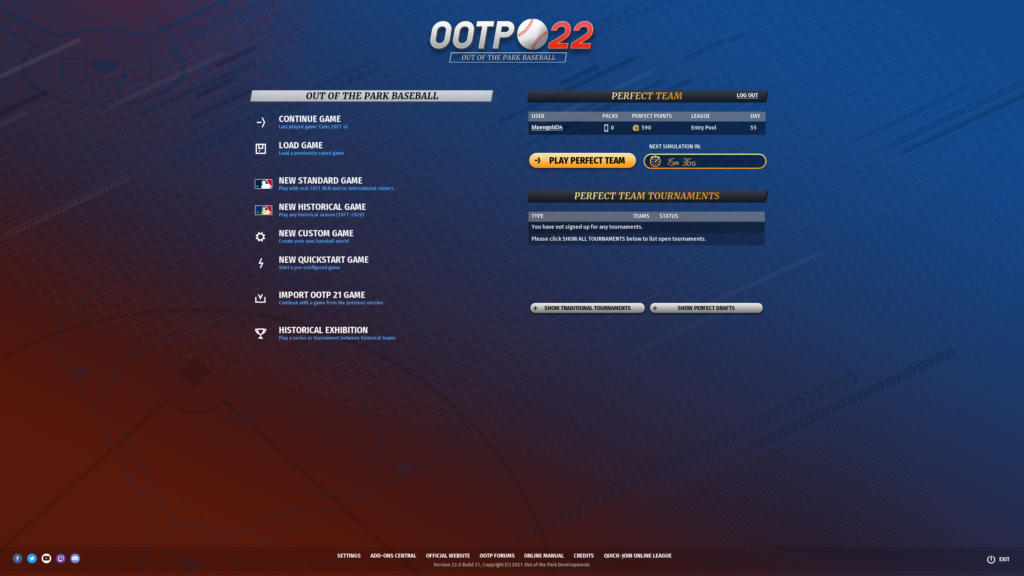 Even if OOTP does not have the licensed rights to a certain league, the infrastructure of the game and flexibility that it provides still allows you to re-create whichever league you desire.

Not only does OOTP ’22 offer the flexibility to pursue different brands of baseball, but it also allows you to adjust the way you play in that league you’ve created. If your approach is to simulate multiple games at a time, that option is offered. If you are a stickler for details and want to have control over every single pitch of every single game throughout the entire season, there is a path for you to do just that.

OOTP also offers multiple ways to enjoy it even if your passion isn’t playing current or past eras of Major League Baseball. As veterans of the series know, the OOTP franchise also offers an Ultimate Team-like mode called Perfect Team. This year the development team has branched off of that idea and blown it out further with Perfect Draft. 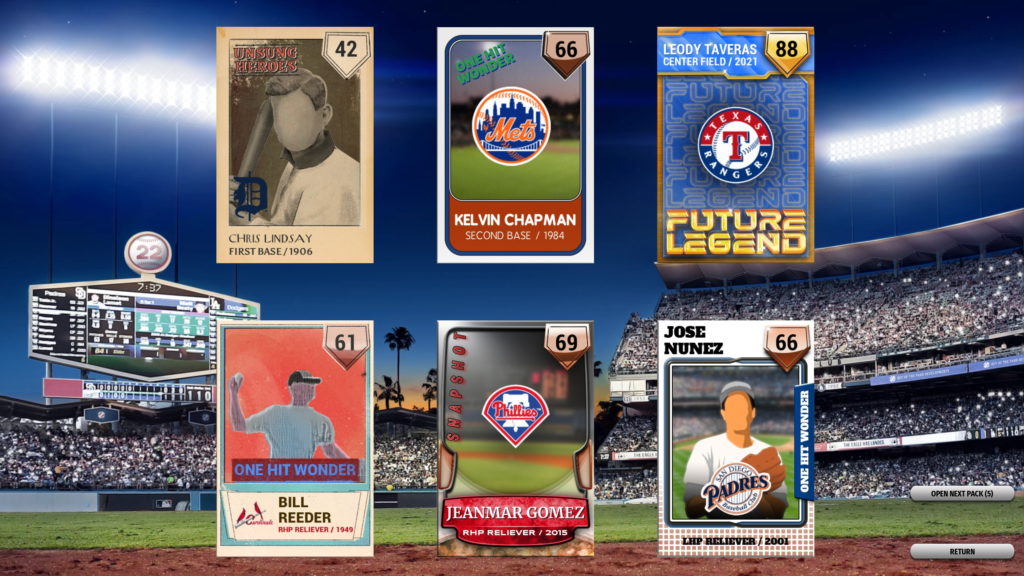 I do not typically enjoy card-based modes like this, but the OOTP franchise does a wonderful job of onboarding you and streamlining the experience.

With Perfect Draft, you are given access to basically every player card in the game. You draft your team the way you want and then the game offers a variety of ways to go head-to-head against others. This includes quick play, daily and weekly tournaments, and yes, rewards are offered. 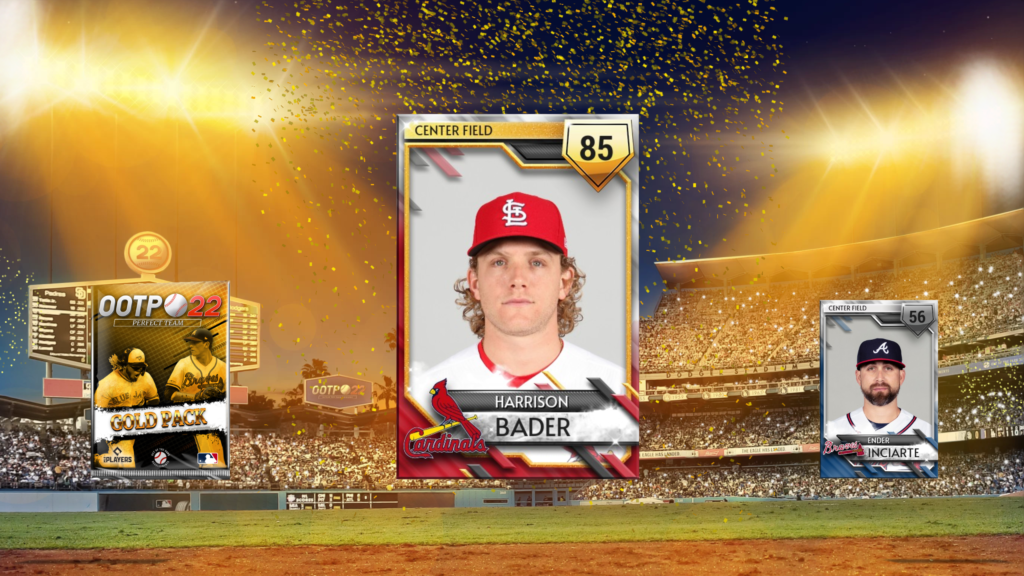 Even I, an avid card-mode hater, found ways to enjoy Perfect Team and Perfect Draft. I enjoy them here because developers have made it so easy to join, understand, and create teams. Will either of these modes be the focal point for me as I move forward with this year’s title? No. But I still respect the added depth and optionality here.

Plus, there is something addictive about trying for the Perfect Draft and ripping card packs to upgrade my current squad in Perfect Team.

It cannot be overstated how much I enjoy the new improvements with the 3-D ballpark renderings in OOTP ‘22. Not only are the current ballparks that are included redefined and wonderfully reimagined, but the new rendering engine also does an excellent job with community-made ballparks that can be imported into your game. 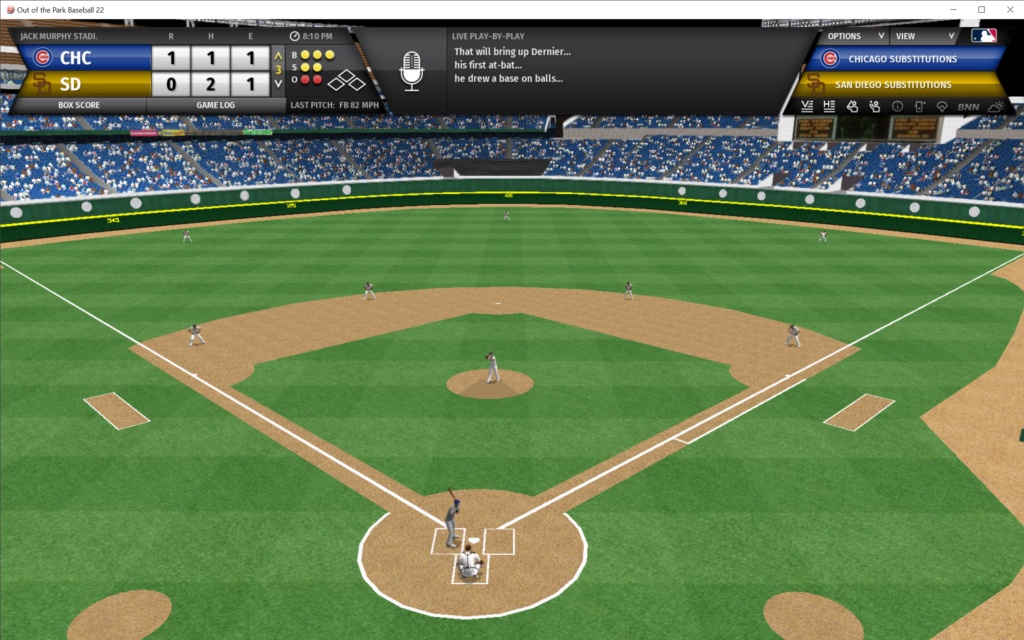 OOTP as a franchise obviously offers a tremendously wide path that allows users to play in different leagues from around the world, and that makes this enhancement that much more important. Whether your choice is to participate in the current MLB season, an international league, or even a fictitious league, the ballpark rendering improvements will enhance the user experience no matter what path you choose.

This is especially important when it comes to the minutia of each ballpark, such as billboards, ad boards, and stadium-specific details. I am currently replaying the 1984 MLB season as my beloved Cubs. This was the era that got me into baseball, so having both the team and the ballpark faithfully re-created is enough to bring a tear to my eye. 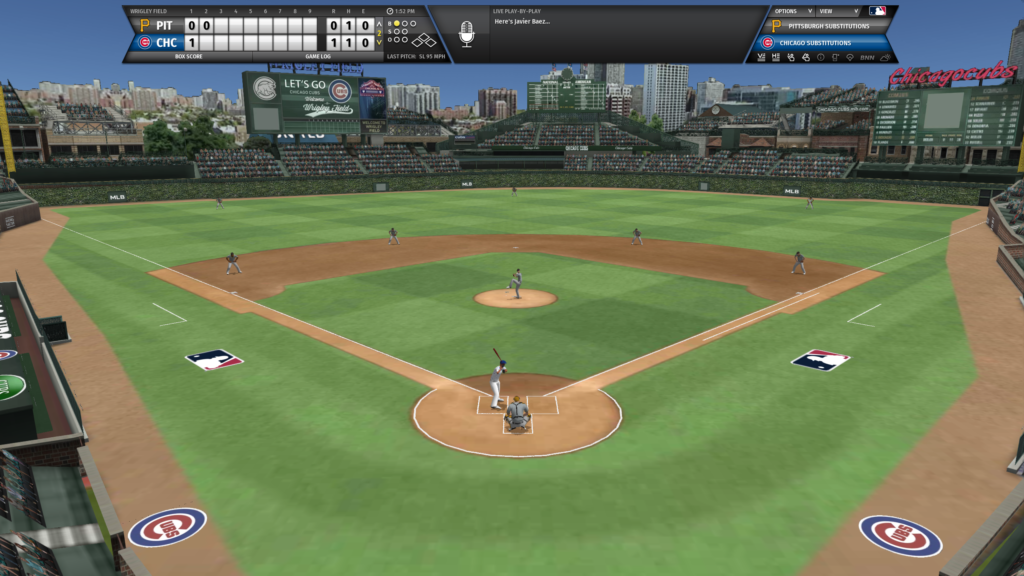 Whether traveling to Candlestick Park, Shea Stadium, Olympic Stadium, The Vet, or one of the many other iconic stadiums from the past, I was ensconced in a bygone era that conjured up images and memories from my childhood. For instance, seeing the historic scoreboard in the Astrodome come alive, or checking out Tiger Stadium with correct ballpark details and signboards was phenomenally enjoyable. The level of detail that the new 3-D ballparks provide is almost incalculable.

The only downside to all of this is the inability to pick up a controller and control the action on the field as I play in different eras, different leagues, or even the current 2021 MLB season. if OOTP ’22 provided me a controller-based experience on the field with the depth and realism of the stadiums and outcomes, I’m not sure I would need another baseball game this year.

It is immediately evident that the gameplay aspect of OOTP ’22 has been tweaked and improved. While the effort last year was appreciated, there were way too many instances of the on-field action not being synchronized consistently enough with the text-based action. I would often witness things like players taking incorrect approaches to balls or running the bases like they had a blindfold on. 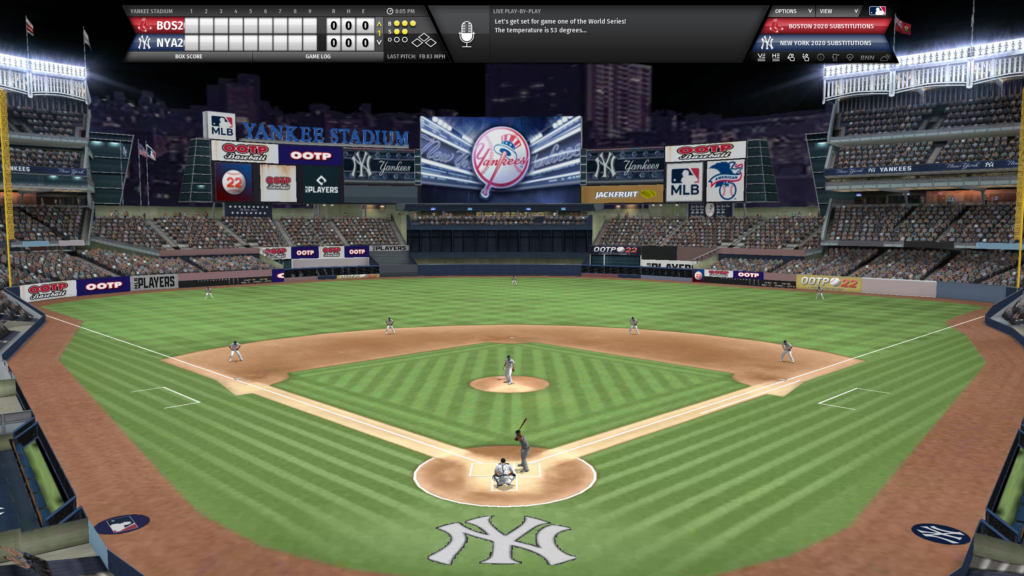 In OOTP ’22, that action has been greatly improved upon, and now the action and text mesh very well together to create an experience that feels authentic — and one that is happening in real-time. Still, while drastic improvements have been made on the field, it’s not perfect and there are times where frustration will creep into the overall experience (I will address this a bit later in the review.)

The bottom line here is that the improvements that have been made to the on-field action are strong enough to create a much better user experience in the long run that adds realism, longevity, and authenticity.

While it may seem odd to list a game’s community, the OOTP community is just about undefeated when it comes to helping this franchise reach heights it otherwise might struggle to touch. If you are familiar with OOTP, then you understand importing content is extremely important for many, and Out of the Park Baseball 22 is no different in that regard. Things like historic Major League Baseball ballparks from different eras can be found, downloaded, and implemented to give an authentic feel to the era in which you are playing. 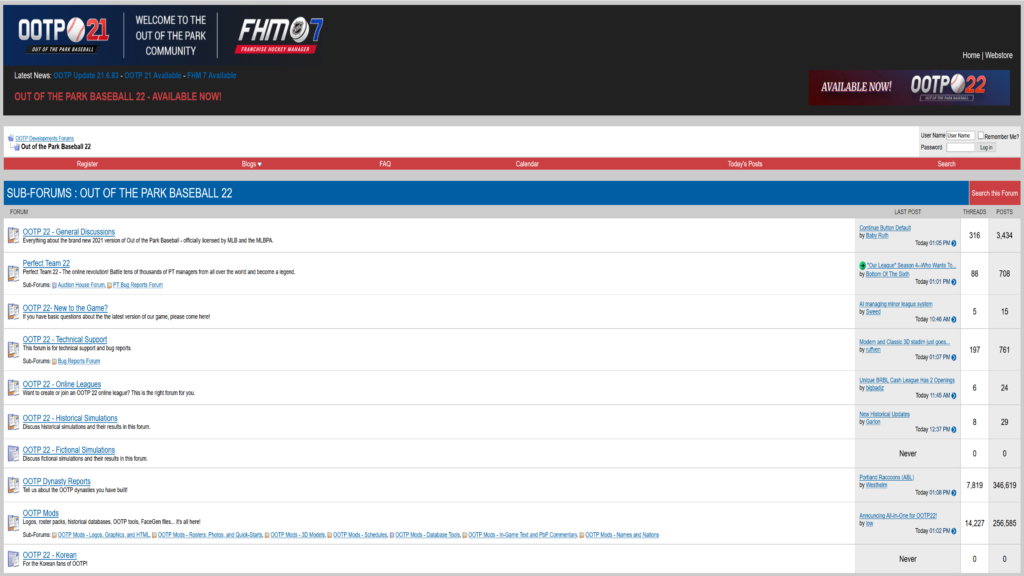 It’s not just stadiums either as the community does a wonderful job of uploading players’ faces and stats, and even historic rosters to help you live in the baseball world that you want to create. While the community does an amazing job of creating content, it does just as wonderful a job of explaining how to get the content into the game — and even helps out with issues along the way.

The best part of the community is you can access it straight from the game itself with a simple click. With one click of the mouse, you are now viewing the forums that allow you to download, learn, and educate yourself. The OOTP community may be the most helpful community that’s attached to a game that I’ve come across, and it should be utilized often, especially if you are a newcomer to the series.

Although I listed gameplay as one of the things I like about OOTP ‘22, and that still rings true, there are some issues.

The consistency in how the game plays out visually and correlates to the action that’s being text-based delivered has improved dramatically, as I mentioned before. However, there are still occasions where, for example, an outfielder looks delayed or hesitant in his initial approach to make a catch or deliver the ball to a relay man after the catch has been made. Sadly, this type of delayed reaction also happens with infielders. 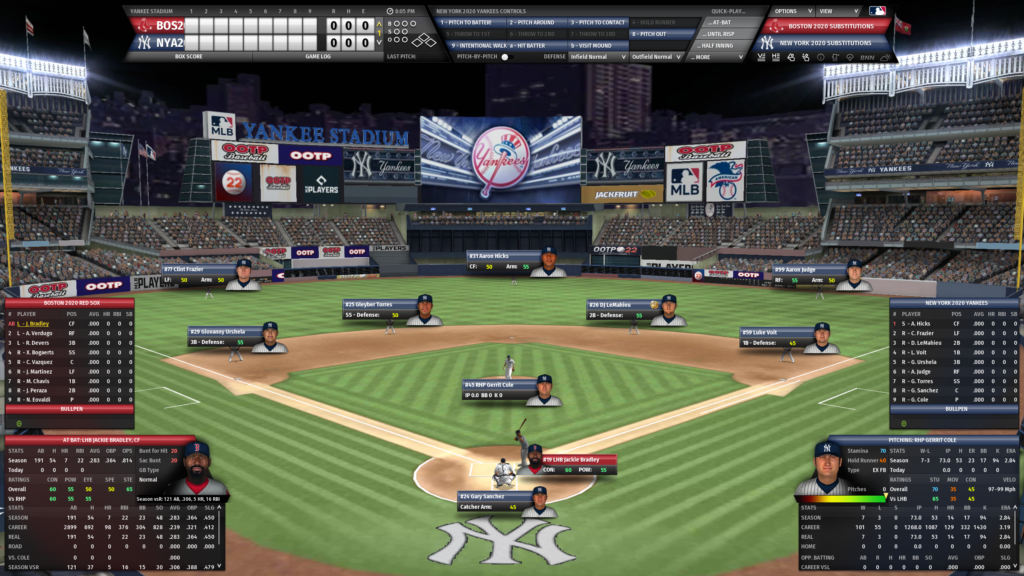 Regardless of the type of infield shifts I used, there were times where I watched my shortstop hesitate to make a play, or he would simply hold on to the ball when there was obviously enough time to throw the ball to the designated bag for the out. The level of frustration for me is enhanced because I love playing controller-based baseball video games to control the action myself. So for those who are like me, you may have the same moments of frustration.

As a veteran of the series, it’s easier to navigate around OOTP ’22, and that’s appreciated. However, I still have concerns about accessibility for newcomers. I understand it’s a text-based game, so there’s going to be navigation issues for newcomers — just as there are periods of learning when you pick up a controller-based game for the first time. Additionally, this is not just an issue with Out of the Park Baseball. Many other simulation-based sports titles that I’ve reviewed over the past couple years struggle to deliver a user experience that provides an experience that I would consider approachable and manageable while still offering depth and realism. 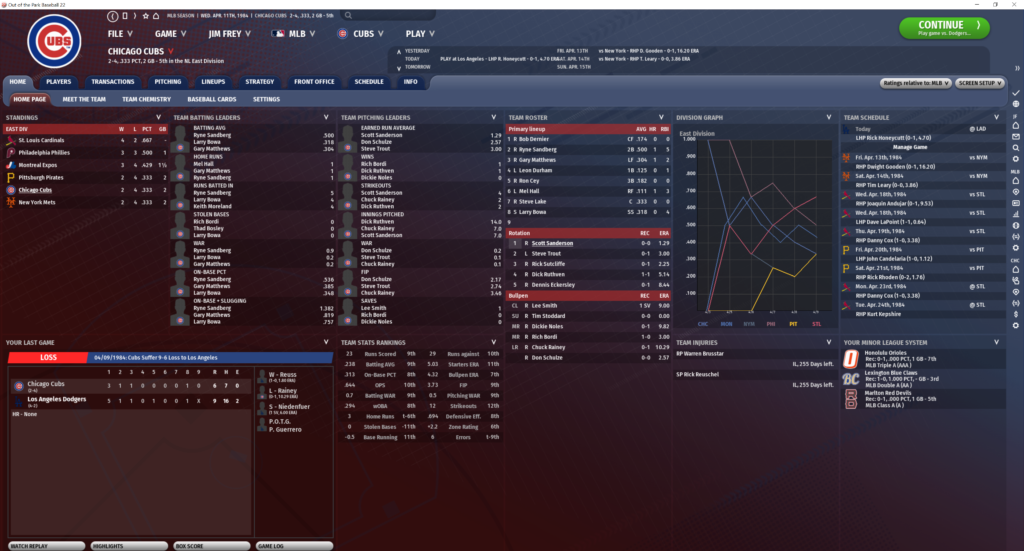 It’s a fine line to walk, and the developers are getting better at it. The developers have provided a wonderful set of tutorials and manuals to help onboard people who are new to the series. The OOTP community also does an amazing job in the forums by offering advice to newcomers. OOTP ’22 Is a wonderfully deep baseball simulation with a deep learning curve, and so it’s an eternal quest to keep that same depth without scaring anyone away.

The visually upgraded 3-D stadiums and the streamlined user interface are the best improvements in OOTP ’22. Of course, there are more improvements and tweaks, but the truth is that OOTP ‘22 plays a lot like last year’s game, and that’s not a bad thing. What I appreciate the most is the development team is working diligently to blur the lines between text-based simulations and “normal” games, and it’s working.

Still, if you are a newcomer to this series, you will need to be patient and willing to learn. If you’re a veteran of the series, the upgraded visual experience is enough to warrant a purchase this year. The real bottom line is that Out of the Park Baseball 22 offers an experience that is worth the price of admission. While not perfect overall, OOTP ’22 is a magnificent blend of fun, complexity, and nostalgia.

Cancel reply
Discussion
Click here to reply to the discussion
Continue Reading
You may also like...
Related Topics:baseball, mlb, OOTP 22, Out of the Park Baseball 22, Review, spotlight