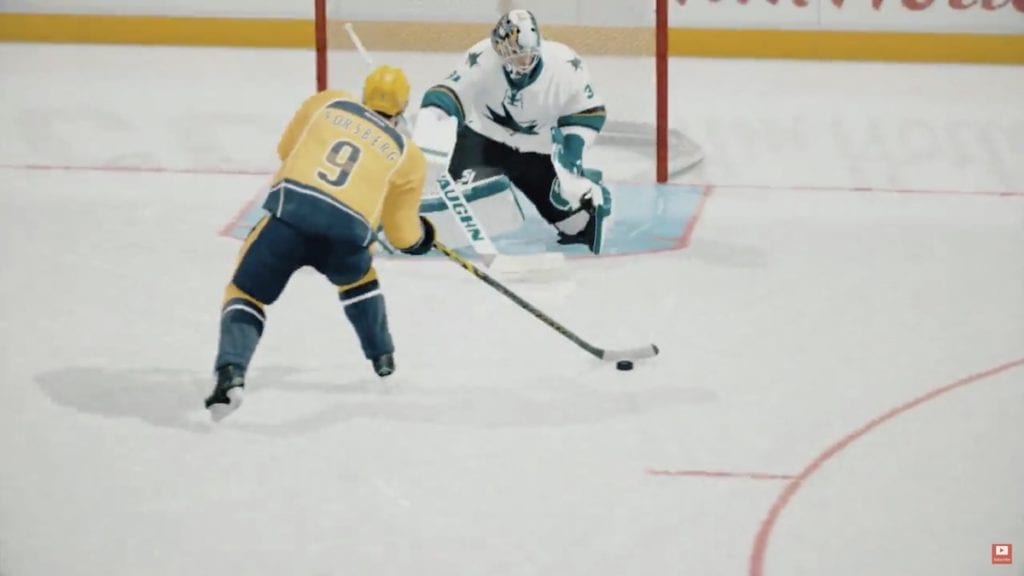 The new NHL 18 trailer dropped yesterday, with details on the new Creative Attack Dekes, Defensive Skill Stick, A.I. Enhancements, as well as the 3-on-3 Mode in EASHL. The new trailer was released to show off gameplay enhancements to this year’s game.

OS’ers reacted with a pretty lukewarm response to the trailer — but there is still a hopeful tone amongst many. Here’s a snapshot of the initial reactions from our comments section… The defensive skill stick and better AI passing looks nice. My main worry so far is still that the AI defense is way too passive, and the goalies still stay too hunched over when playing and moving. It seems one of the bigger problems with goalies is that they do everything in their power to square up to the shooter, almost to a fault. If you watch them move in the video, they seem to come out of the net to the top of the paint, but then they seem to stay almost lined up in the same direction as the cross bar, and centered directly on the puck, even if the puck carrier is way to the side on a backhand. This ends up leading to them being out of position, and that coupled with their jittery sliding animations where they don’t really dig in and push off, but shuffle, leads to them allowing a lot of easy goals that they would normally save. The skill stick will be nice on defense, but it still looks like the AI is just still skating along next to players and facing away from the puck a lot. I’m really hoping that gets more love before release, as it’s been one of the bigger issues in the game for me. Sure, I can deke and dangle all over, but it’s not fun when my AI defenders just skate backwards watching the puck carrier. Meanwhile, OS’er Jay D signaled a bit of excitement over the 3-on-3 mode:

I couldn’t be more excited about the 3 on 3 modes. I absolutely loved seeing 3 on 3 in OT, and thought it would be great for the ASG even before I saw that it was what they were doing. There is a good chance the 3 on 3 may get 90% of my play time.

Diehardfan was less than impressed with the trailer however:

Another idiotic dekefest…will they never learn? Actually, they pretty much have learned….learned how to make money repackaging much of the same features and adding some small ticks to keep the teenagers happy. I recently picked up 17 for $10….and have played a few games and quickly realized that I overpaid. I wouldn’t touch 18 with 10′ pole.There is a good chance the 3 on 3 may get 90% of my play time. Dazraz, in particular, signaled a desire for improved presentation in the game, which we suspect we’ll be hearing what was done there soon:

Personally I actually enjoy the current NHL game in terms of Gameplay. What I want to see is Improved Presentation/Commentary & a sleeker & more informative menu system.

I guess I don’t really get the purpose of the offensive passing AI changes. All NHL is already is a fire a pass to center ice or the far blue and enter the zone by yourself. Then take a shot from the slot because the AI defense allows you to walk in. I mean it’s the same issue every year. If they made AI changes to defense then we would be talking about something great. Maybe they did but didn’t mention it, but I highly doubt they did. As others have said the goalies are terrible. It’s the same unrealistic animations every year. Finally people are starting to notice because over the last few years when a few of us talked about it, the majority said goalies weren’t a large issue. OS’er seem pretty split to lukewarm on the trailer. The new enhancements do look promising, but perhaps they are in the area where OS’ers weren’t really looking for improvements.

Regardless, we’re expecting a lot of information in the coming weeks on NHL, so stay tuned for that!

Be sure to visit the NHL 18 trailer thread to join in on the discussion!