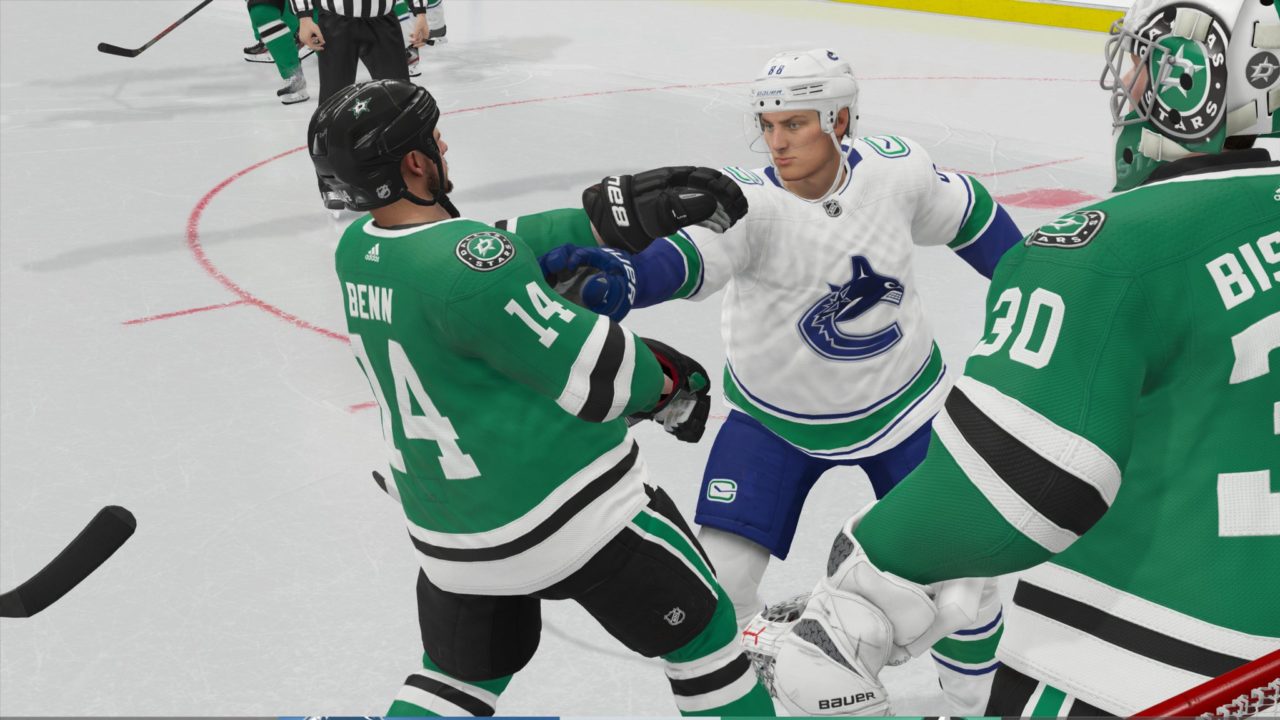 You can read part one of my NHL 21 wishlist here. I also want to reiterate before diving back in that my biggest gripe — and this has been the case for years — relates to the arcade-style gameplay. I personally would much rather have an excellent playing but poor looking game rather than an exceptional looking game that plays poorly. So with that tidbit of information in mind, my wishlist will not include any gameplay features. Instead, I will release a full in-depth article specifically focusing on my frustrations with its gameplay in the coming weeks.

This plea is a similar one to my plea for revamping the trade deadline in franchise mode. Most of my time with the NHL series is spent in franchise mode, specifically the fantasy draft version of franchise mode. Frustratingly, it doesn’t matter how many different fantasy drafts I end up doing the results are always the same. At the end of every fantasy draft, the same experienced but older full-time NHL players always go undrafted — finding their way to the crowded free agent pool to begin the season. 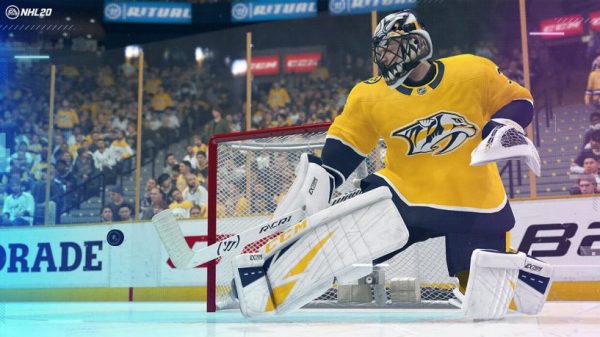 Furthermore, it gets even worse from there. These NHL players who do not get drafted more times than not do not even get signed by a team once the season starts. You would expect forwards like Corey Perry, Cody Eakin and Barclay Goodrow to garner attention, but they do not. Additionally, older reliable goaltenders also get forgotten about. Legitimate backups like Ryan Miller, Cam Talbot and Brian Elliott are usually never signed either. Now, granted none of these free agents are going to make or break any one team, but there is still a deflating feeling I get when seeing the lengthy list of NHL free agents.

Outside of the Stanley Cup Finals, the Winter Classic is perhaps the biggest event the NHL puts on every year. And if it is not the second, it is definitely number three. The NHL’s Winter Classic has become a yearly spectacle since its introduction over 10 years ago — way back in 2008. Shortly after its introduction, EA did include a playable version of the Winter Classic in the NHL series — although it wasn’t playable during a season. However, instead of enhancing that feature in future releases, EA ditched the feature shortly after its inclusion. Now, after all this time, simply bringing back the version that was once included is not good enough. EA needs to add the ability to have the Winter Classic and the other outdoor games in franchise/season mode. How could this feature still not be included? It’s a little bit embarrassing.

Could you imagine NBA 2K not including the 3-Point Contest or Dunk Contest in their game? What about imagining MLB The Show not including The Home Run Derby? Even to a lesser extent, imagine Madden not having their Pro Bowl as a playable feature. Like mentioned above, the NHL’s All-Star weekend is one of the NHL’s three biggest events every year, and yet EA has failed to include two of the three? How is it even allowed to exclude two major yearly events tied to the NHL?

Franchise mode would instantly feel refreshed with the inclusion of All-Star weekend. Now, this feature might need to be toned down a bit, as perhaps the inclusion of the new Shooting Stars competition might be tough. However, I feel like most could live with that one omission. Just give us something. Furthermore, if you have the Skills Competition as a playable feature outside of franchise mode, you have hours and hours of new excitement and fun. The Hardest Shot and Accuracy Shooting competitions are a must! 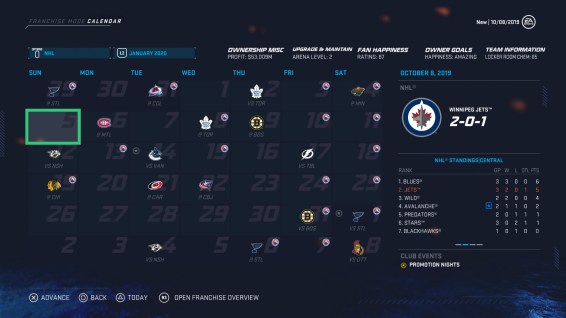 I also hate to beat a dead horse here but the screenshot above is the example of how EA fills — or doesn’t fill — what is supposed to be NHL All-Star weekend. Their choice? To leave the days on the calendar completely empty. Again, this is a bit embarrassing. I’m not sure if it’s just a small team or a lack of care, but either way priorities need to be reassessed if things like this can’t make it into the game. 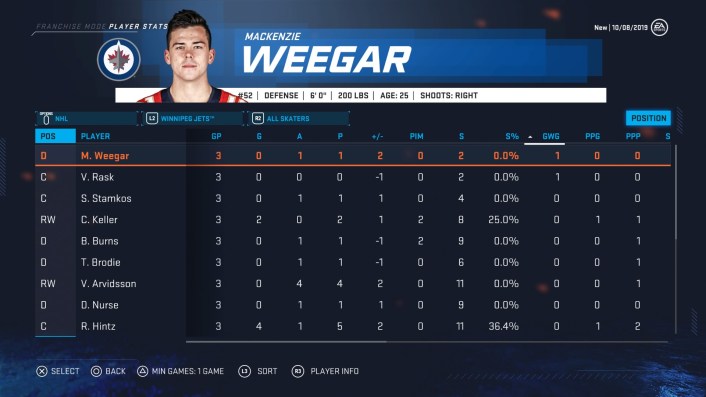 During the course of any season, you will randomly find wacky statistics that just don’t make any sense at all. Above is a screenshot from just three games into my fantasy draft season in franchise mode. Somehow two of my players have game-winning goals without yet having scored any goals. What!? And no these weren’t shootout game winners as I had yet to go into a shootout. 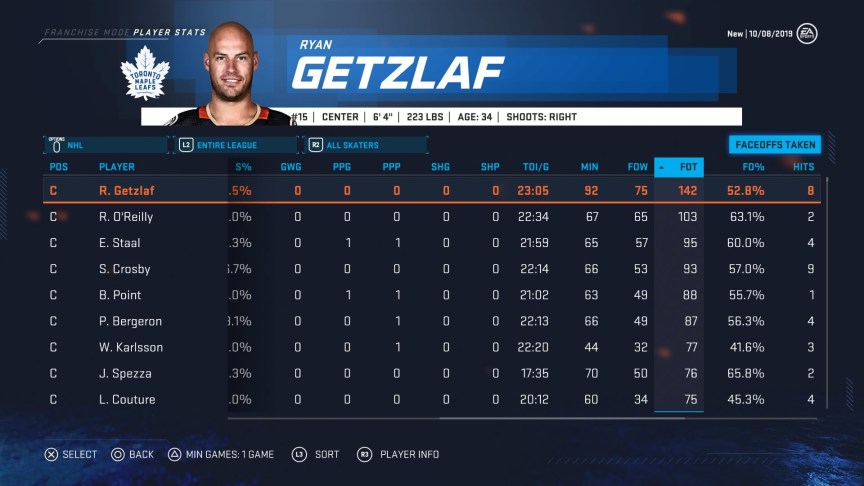 Additionally, here is another example of EA’s statistical categories being completely glitched out. Look at the totals for Ryan Getzlaf’s FOT (faceoffs taken). The CPU-controlled Toronto Maple Leafs have played four games so far in the season, and yet somehow Getzlaf has managed to take 142 faceoffs. Over the first four games, Getzlaf is averaging 35.5 faceoffs per game. Furthermore, the other centers on this list have all also played 3 or 4 games so far.

Now, granted I do have the goalie puck cover slider at 45/100, so maybe it’s too high and is resulting in Getzlaf’s obscene number of faceoffs taken. However, even if that crazy number is slider induced, that level of absurdity is still off the charts here. And, remember, that is with the slider set to barely less than halfway. I would hate to see the FOT number with the setting at 100/100.

Revamped Be A Pro

Personally, I do not have a lot of interest in Be A Pro, but I know that a lot of fans of the NHL series would like to see this feature revamped. Over the last few years other EA development teams such as Madden and FIFA have introduced some pretty good Be A Pro/story modes, and it would nice to see the NHL team put a little more focus into something that has otherwise become a bit of a sleepy mode.

What else does everyone want to see in NHL 21?