There are a couple things that all card-collecting modes in sports games are expected to have in 2020 in order to keep up with all of the comparable modes in other titles. Cards themselves, for starters, are pretty integral if you want to get anything done. Then you need to have some regular objectives and challenges to achieve in order to obtain rewards and better cards. A healthy balance of online and offline modes is important too. For better or worse, even microtransactions and rolling the dice on buying packs have become a staple regardless of what Ultimate Team mode you happen to be playing.

But one of the most increasingly important things that all of these modes need to contain in this day and age of dwindling attention spans is some kind of quick, stripped-down version of the sport that you can jump in and out of without too much commitment or hassle. MLB The Show scratches this itch with Battle Royale’s 3-inning games and Madden has a House Rules mode that regularly switches up things. But until now, the NHL series never offered anything in this bite-sized format, instead forcing anyone looking for competitive online play to slog through three-period games that generally take about a half hour to play. 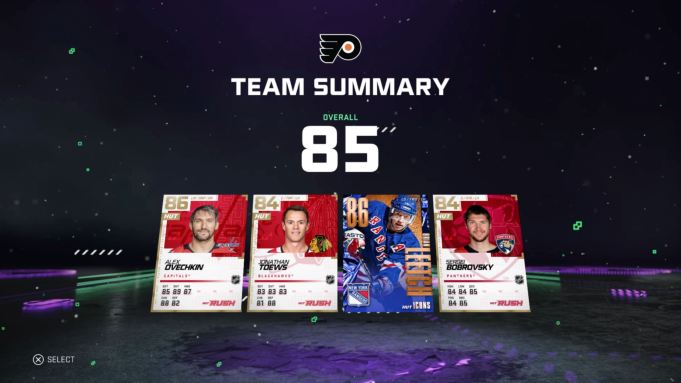 That’s why the NHL 21 HUT Rush mode is exactly the fast and frenetic mode needed to stay relevant and keep people playing. While some games may be tempted to try to innovate by getting overly complicated, HUT Rush takes exactly the opposite approach by sticking to the basics and encouraging all of the things people love most about hockey: nasty dekes and finishes with the puck, monster bone-shattering body checks and, of course, getting your team that sweet victory. It’s also already showcased some promising variety in how exactly games will shake out in the mode and assuaged any fears that it wouldn’t be worth playing by offering plenty of nice rewards for completing objectives.

At any given time, you’re likely to find two different types of ways to play HUT Rush. Recently, the two options were a full 6-on-6 game that had you using your actual HUT squad in a simple 4-minute game, while the other had you drafting a couple players to pair with the Flyers’ legendary-mascot-turned-center Gritty in games where the first to three goals wins. Having these two different and distinct formats at your disposal gives you the opportunity to try them out and figure out your own preferences. Getting beat by too many teams that are clearly better than you in the more competitive 6-on-6? You can switch over to the other and get Gritty out on the ice and have some silly fun. It’s also nice that you don’t even necessarily need to play HUT Rush online if that’s not your thing, with the option of going against the CPU instead if that happens to be your preference.

At least for the majority of the events that had been held up until the most recent ones, the gameplay had been set to arcade and, as a result, realism had taken a backseat to mayhem. The two current events are set to competitive gameplay, however, which isn’t necessarily a bad thing but it might be preferable if at least one were still set to arcade style to achieve the kind of variety that seems to have been intended within the mode. Regardless of the style though, you don’t have to worry about abusing poke checks or lining up a hit from all the way across the ice because no penalties are going be called either way. This results in some ridiculous moments where players are sent flying from big collisions and then other players will trip over the body splayed out on the ice like some sort of physical comedy routine. Sometimes you can even get goals as a result of the opposing team being caught up in one of these massive pile-ups.

After each game, you’ll receive a number of points based on how you’ve performed. The great thing is that you accumulate points throughout a game for nearly everything that you do, from taking back-handed shots to those aforementioned body checks, so you end up with a decent amount of points no matter how the game goes as long as you’re participating. There are also some set objectives for each event that involve accumulating things like hits and slap shots taken over the course of all of your games that will reward you with more points for completion. As you rack up points, you’ll unlock new tiers and that will get you the rewards that you really want in valuable packs that may or may not contain your new best player.

As with any new mode, however, there are still some kinks to iron out with this rewards system. For one thing, many people weren’t even receiving their rewards initially, though it does look like this problem has now largely been rectified. The bigger issue remaining is making sure the reward tiers are able to accommodate all types of players. It currently may be fine for casual players who will take a while to unlock the available tiers, but those who love to grind and grind quickly may find themselves with little worth playing for once they’ve already unlocked all of the tiers for each event. The mode may need to take a page from MLB The Show’s Diamond Dynasty programs and just add seemingly unlimited packs to the end of the tiers to keep the ultra-dedicated people coming back for more.

Nevertheless, NHL 21 looks to already have a hit on its hands with HUT Rush. It wonderfully fills a void that existed within the Ultimate Team mode for some fast and loose hockey that doesn’t demand a huge chunk of your time. If the developers are able to figure out a better rewards system that works for everyone, and mix up the format and gameplay styles enough to keep things fresh and interesting throughout the year, it’s poised to become a welcomed new staple of the series for years to come.

NHL 21 Franchise Mode - What Team Should You Use?
NHL 21 Free Agents Still Looking for Teams - Who Would You Sign?