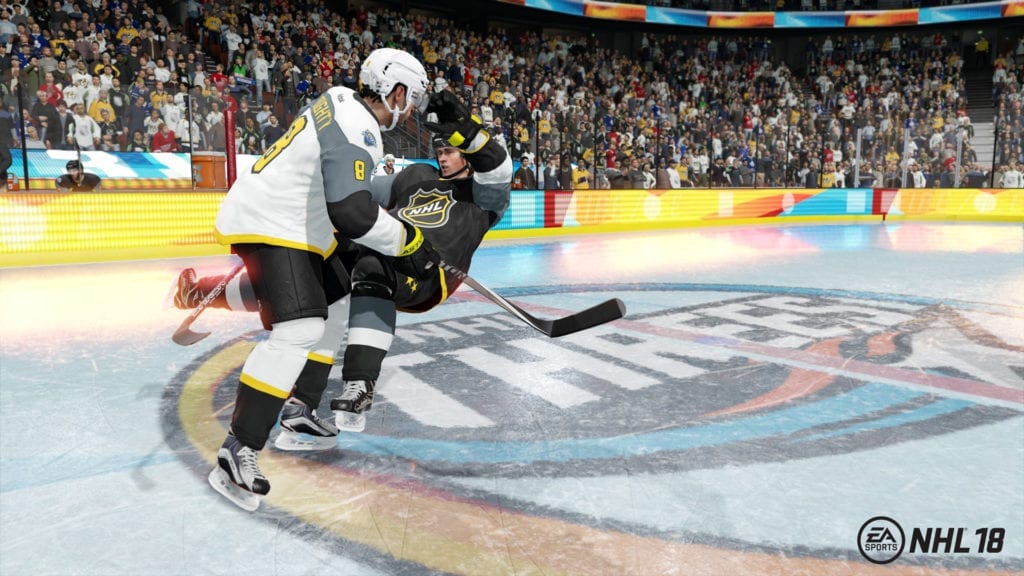 Yesterday, the NHL 18 beta dropped and we’ve finally gotten our chance to play what the newest edition is going to be offering up. You’ve already thrown in some impressions, but now its our turn. Check out the staff impressions of the beta below…

The NHL 18 beta came out yesterday and it seems like everyone is eager to get their hands on a code. Every year I say NHL “feels better” but the game becomes stale and some old ghosts come back to light.

After playing for roughly three hours, I can say, without prejudice, that so far this feels like one of the best NHL titles to come out in terms of being vastly improved from the previous year. I’m always highly critical and have no problem lambasting an effort that is underwhelming. The beta plays so, so smoothly. Gameplay is slowed down a bit, and I think that actually lends well to the game. You quickly notice the improved AI right from the first drop of the puck, both on offense and defense. Lining up a hit to quickly get undressed by the CPU was insulting, infuriating…and extremely refreshing. Puck cycling played out well and the new passing availability was nice.

Threes is SO MUCH FUN. My first game officially was an offline Threes match against the CPU that I won by a hair. The action was intense and exciting. Playing an online game of Threes against another player was smooth with virtually no lag at all. Matchmaking happened in moments, and loading times were also quite quick; load times across the various modes were quite quick in general. I can definitely see Threes being a favorite for players that are having buddies over for a game session, or even pairing up with your friends online.

EASHL Threes was also quite interesting. The couple drop-in games I played were quite fun and all players actually played well without anybody trying to be a hero (one of my gripes from past EASHL drop-in experiences).

The ONLY issue I have so far is the defensive skill stick; I find it to be too overpowered. I love the addition of it and how it allows you to play defense, but poke checks being successful at such a high rate doesn’t fly for me. Hopefully that’ll get looked at and addressed for final release.

All in all, the NHL 18 beta so far is a sweet piece of work, and better than I expected. Having played a lot of NHL 17 last year, the hope with the NHL 18 beta was that the gameplay would be so significantly improved that you couldn’t help but notice immediately. Instead, I was initially struck by how familiar it all felt, as if EA hadn’t really done much work on this year’s game at all.

But as I played a game of EASHL, I slowly started to realize that while there might not be any monumental changes that jump out at you, there has been a lot of subtle fine tuning that makes for a much smoother game of hockey.

As someone who likes to play on defense and takes pride in not taking too many chances in jumping up into rushes or pinching in at the blue line, I’m happy to report that defense has seen a lot of improvements. The defensive skill stick allows for far more control, and it’s now much easier to block passing lanes and break up plays in your own end. Also, the movements of your player don’t feel quite as clunky as they did last year, where the controls weren’t responsive enough and you’d often found yourself slightly out of position because of it.

I haven’t had nearly enough time yet with the beta to form too many definitive conclusions, but for now it seems like it’s not the overhaul some people wanted but has at least shored up some of the glaring issues that continued to frustrate last year. In my limited time with the NHL 18 beta thus far, I’ve enjoyed what I’ve played. Defense has seen some particularly noteworthy enhancements, with the defensive skill stick and subtle AI improvements making for a more satisfying on-ice experience.

That said, it gives off an ‘NHL 17.5’ feel in many areas. Presentation is the biggest culprit, sporting many of the same cutscenes, commentary lines, overlays and more. Minor additions aside, the beta’s in-game presentation is almost identical to that of NHL 17, which itself felt reminiscent of NHL 16 and 15.

Elsewhere, I’m impressed with both the visually appealing menus and greater range of ways to play. NHL Threes is particularly fun, emulating the appeal of 2009’s 3 on 3 NHL Arcade to an impressive extent. However, while I recognize its potential, I also fear for its ability to retain its appeal in twelve months’ time.

Ultimately, the NHL 18 beta plays a better game of hockey than ever. But it also feels a little ‘been there, done that’ at times. I don’t dislike it – NHL 18 is shaping up to be a good game – I just crave something a little fresher, particularly in terms of in-game presentation.