OS Roundtable: We’ll be getting next-gen news all this week it seems, but what are your NBA 2K21 next-gen trailer reactions after 2K’s reveal today?

Chase Becotte: Watching this trailer in 4K (be sure to switch to that on YouTube) really made things pop in a way that made me feel almost as hyped as I was when I first watched the NBA 2K14 trailer with Phil Collins blaring in my headphones. There is a lot here to digest, and I think it’s not always as immediately appreciated as the last “next-gen” trailers if you only watch in 1080p. Still, that first close up of Damian Lillard screaming really does sell the leap for me.

The lighting is the biggest jump here, and that makes the improved textures, facial expressions, crowd and arenas all substantially more impressive (Dame even has vasculature popping in his neck during his scream!). Now, if I’m throwing cold water on the proceedings from a graphical standpoint, 2K14 and 2K15 were incredible looking games that slowly started to look less impressive as 2K made tweaks to the engine throughout last-gen. I hope nothing like that happens here, and the way the action was shot, I also hope the frame rate is not an issue in the final release.

So, look, I’ll be the first to back anyone who is skeptical of gameplay, animations and basically anything that falls outside the raw graphics until we see some normal gameplay. But at the same time, I’m not going to try and say “the defense looks the same because Powell didn’t rotate” or “wow they really let Hardaway Jr. beat Klay off the bounce” based off some flashy trailer. 2K has ‘wowed’ me with this trailer and softened the blow of a disappointing current-gen game for the time being, but now it’s time to see what else is here in the coming days and weeks.

Brandon Kosal: I skipped current gen as I jettisoned my PS4 to put money towards my PS5 pre-order. Given the impressions from OS and other places, I didn’t feel like I was missing much. I decided then that I was going to get 2K21 day one for next gen. And although this trailer didn’t change my mind one way or another, it left me feeling a little underwhelmed — if only because I wanted to see more “normal” gameplay.

The solo-focused shots on Dame and Zion were impressive for what they were, but all I care about is in-game, which is what the latter half of the video was a little more about (but still not enough). I know this is a first-gen release on next gen, but I wasn’t too wowed, especially considering the camera I use in game will be further away, so the graphics probably won’t pop as much.

The movement in general appeared more fluid, but Luka’s step-back jumper at the end looked a little jerky. The player and coach faces were a mixed bag, and the crowd is a bit of a letdown (though, yes, clearly more alive). But at the end of the day, if the gameplay is there, I’ll be content. And given that they haven’t shown us much, I don’t want to be too critical.

Matt Ederer: I can’t believe the creepy bald assistant coach made it to the PS5. Look at that pale, gray, Shrek man below! 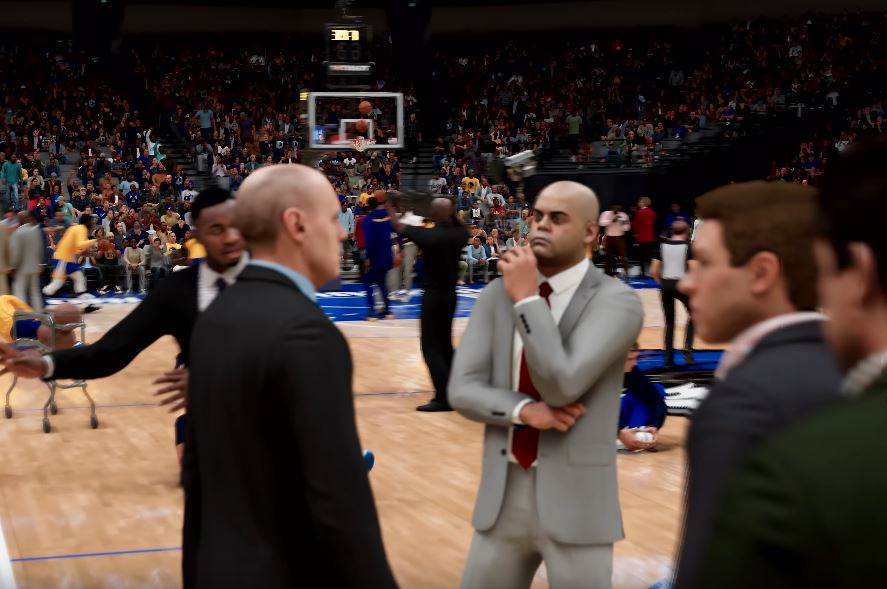 All joking aside, it’s still too early to say if this will be the PS4 version just with better graphics. But I’m encouraged by the look and feel of Steph, Klay, Dame and Luka. The courts and the crowds (lol, remember human interaction? No, me neither) are extremely impressive, but until we see the changes they’ve made to the actual game, it’s hard to get too jacked up. It sure does look purdy though.

Joel Smith: The NBA 2K21 next-gen trailer dropped and it mostly looks good. Appearances aren’t everything for me though. After experiencing 2K21 current gen for a month now, I’m looking to see how this game plays, and how the apparent overhaul of all game modes will look and play out.

I also have to be “that guy” and point out some things that I noticed from the trailer. I’ll start by saying that the movement on court does look a bit better, and the player models look pretty dang good for the faces and players we witnessed. The arena and crowd immersion look great. However, a few things I have minor gripes with:

I really hope that this trailer is the beginning of some awesome next-gen news for the modes we all love. A complete rebuild of the MyPlayer Builder and improvements to MyLeague is what I’m anxiously waiting to hear about. In short, the trailer looked good but graphics are the area where I feel like we already trusted 2K to come through.

Jeff Botkin: I’m very optimistic about the 2K21 next-gen gameplay reveal. It is obvious to see that the trailer is emphasizing the environment. The atmosphere in the arena looks fantastic. The number of coaches, player, media and others all on the court bring to life what it is like at an NBA game (in normal times). Graphically, the players look stunning so hopefully there are custom cameras or a variety of options that will allow for these to really shine.

What does this all mean for gameplay? It’s hard to tell based on the trailer. There were several scenes cut together to make it look good, but again, it’s hard to tell. Hopefully gameplay evolves and creates the smoothest form of NBA basketball gamers have ever seen. I can’t wait.