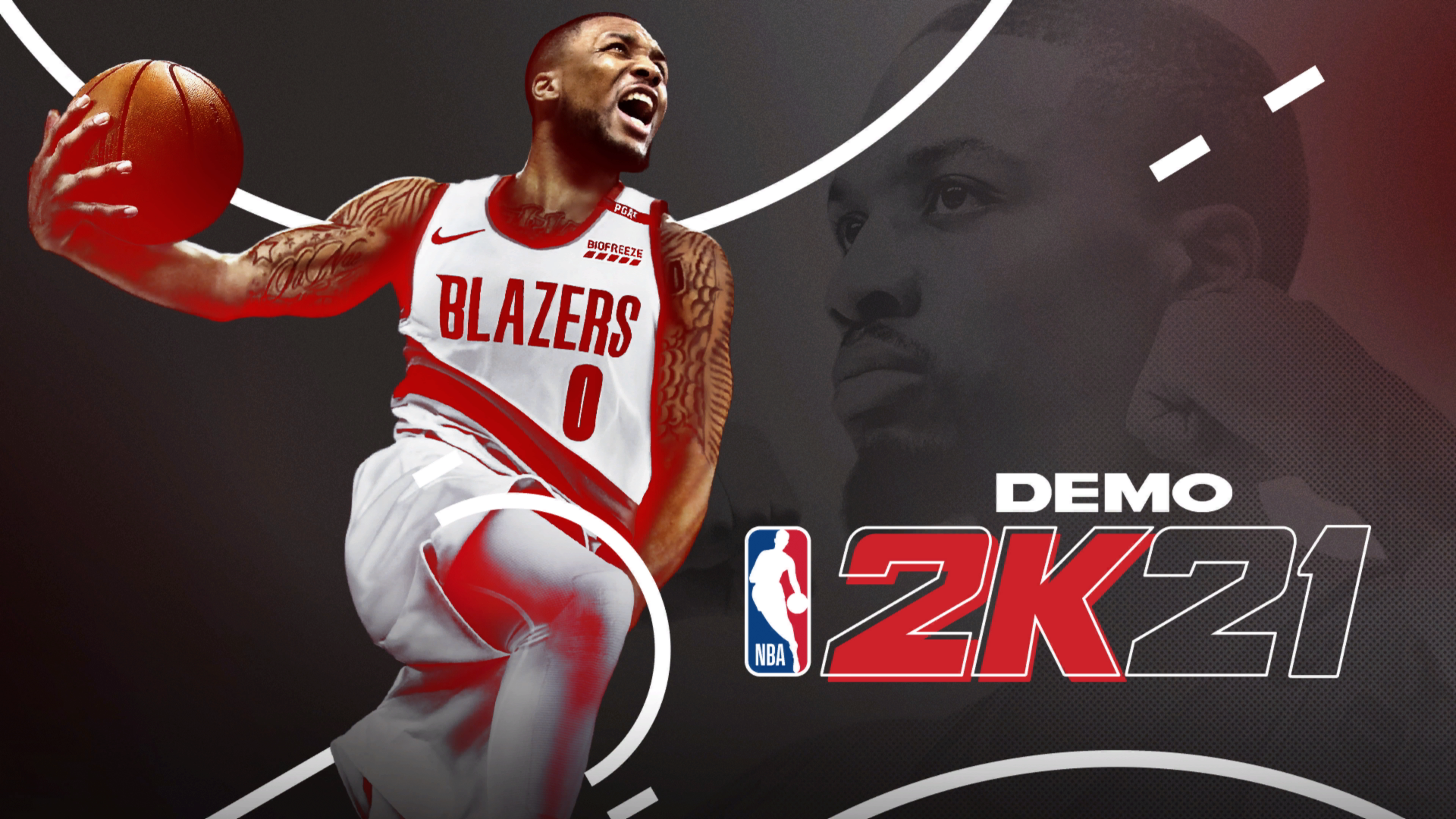 OS folks have already been sharing their impressions of the demo and they will continue to do so. But as it relates to the staff, what are your NBA 2K21 demo impressions at this point?

Chase Becotte: I’m simultaneously scared and excited. I’m hopeful and worried. I will totally understand those who say this is the “same game but with a new shot meter” because I get it. The graphics have clearly plateaued, and in general many people who have been playing sports games this whole generation are a little fatigued and ready for next-gen consoles. That being said, I really do think the shot mechanics can be an important game changer here.

First off, I think green releases are bad and they’ll always be bad. I’ll never agree with them being a thing, but I think that fight is one the 2K team will generally lose when it comes to public opinion. With that in mind, I really just care about freedom of movement and creating ways to make the game feel more unique possession to possession. Too often in 2K, there is a very noticeable crutch (at least in online environments) where people are just doing speed burst duck and cover around on-ball screens, or doing a couple specific plays to get an open shot to green a release. It sucks and is not enjoyable to play against.

But there is a competing issue with online games and that’s the latency factor. In a purely timing-based system that is also impacted by how tight you’re covered, it has never been a great look for 2K that the online environment is so spotty game to game, and mode to mode. This shot mechanic tweak, in effect, does the latency-tuning job for them by making it about aiming rather than timing. 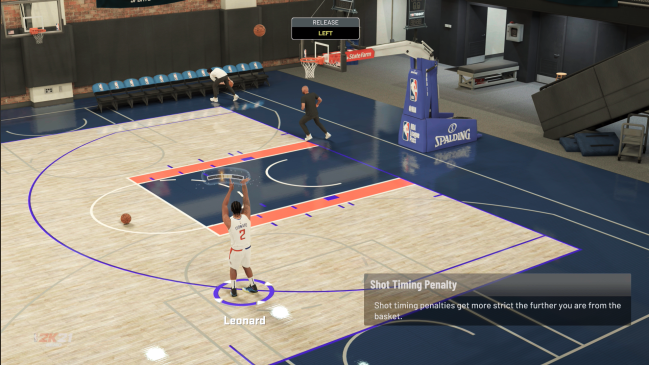 Now, of course, you can still both aim and time the shot if you want (and I think that’s cool to still have there), but this is where the fear and excitement begin to clash. There is going to be a battle over this. It’s inevitable. Some people are going to hate aiming and immediately give up on the new mechanic, and I worry about how the “timing” crowd will then co-exist with the “aiming” crowd when it comes to balancing the game. I will want to play with other “aimers” I think at this point, but I doubt 2K will want to break up the online communities that way.

Personally, I like the aiming system a lot so far for shooting (and this version of the meter is easy enough for me to read, but I have seen some complaints about how it looks visually speaking). And, before I explain why, it’s good that just pulling down on the stick now triggers shots. This is the best change of them all no matter what happens with shooting because this opens up dribble creativity so much more without the fear of shooting by accident.

I also think it’s worth mentioning that I am someone who plays without a meter in 2K20, but I will be fine having the aiming meter on now because I think it provides so much to the shooting types and dribbles. Even when I got timing down in 2K20, I did not like doing leaners and so on because the timing was different from the “regular” jumper you also had to learn for every player. I don’t mind the concept of knowing your squad for jumpers, but then also having to try and remember how to time things out on the shot types that weren’t just basic jumpers was a bit much in terms of having faith in your own abilities.

Instead, I now feel like I’m going to be way more into shooting in different scenarios because down is always how you shoot now, and I can have faith that I don’t need to recognize what the “top” of a jump shot is now on a fade or whatever. This tweak also makes it so you can absolutely disown turbo closeout psychos with a little side step and then banging home a shot. That already feels good against the CPU, and doing it against terrible players online will feel even better. 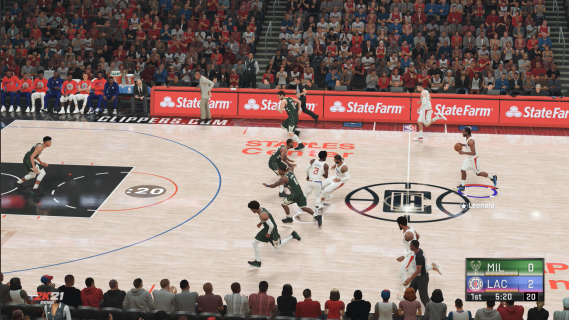 There are slight player movement quality-of-life improvements here as well that coincide with the shooting change. For example, you can now more easily step in on a shot if you catch the ball way behind the line. This was a constant problem last year as 2K had AI players line up further behind the 3-point line like they do now in real life. In theory this was fine (and realistic), only you couldn’t really make shots from that far out with any consistency unless you had certain badges, and the AI/humans closed out too fast at that point and it made zone defense way too strong.

On top of that, I won’t fault people who don’t notice these changes right away (or even at all), but some dribbling animations feel more opened up now when creating space against the AI, and I do think this will show up against humans as well. For example, I think size-up moves feel stronger and the quick stepbacks feel better as well. In conjunction with now feeling more agile and confident on non-standard jumpers, I’m excited about the prospects of taking more styles of jumpers where I create that space and rise up for more complicated shots where the contest percentages are lower.

Of course, none of that might matter if the contest system isn’t tightened up, and I’m still not ready to go one way or the other on that question. I also have some concerns with transition defense still, and with this being a transition year I don’t feel super confident in certain legacy gameplay issues being totally cleaned up. Regardless, I do think there is more here than meets the eye, but all I’m worried about is what happens to this game once it’s released. Please 2K, let this game simmer. Do not make huge balance changes or pull away from believing in “aiming” for shooting if you actually want to trust it. Give the game at least 2-3 weeks in the wild before changing stuff. 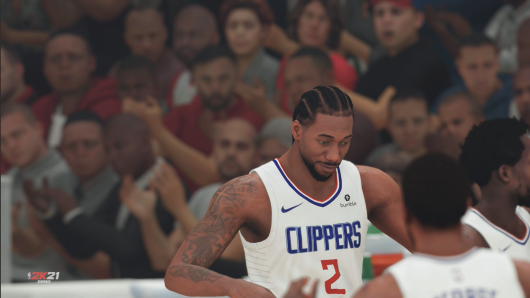 Joel Smith: In my very brief time with the NBA 2K21 demo so far, I can say that the only thing that immediately stood out as different was the shot meter and shooting itself. Using the stick is definitely going to take a little bit to get used to. Shooting with the square/X button might also take a little getting used to solely because of the new meter. Other than that, the game looks and feels the exact same so far. The fact that you can only play five games is also silly to me. Why would the 2K team put a limit on what we can do within the demo in terms of play time? How do they expect people to get the hang of the changes made in such a limited play window? Using the MyPlayer Builder counts as a game out of the five available, which is also frustrating. It seems like figuring out a good build will have to wait until the game drops next Friday (September 4). As it stands right now, it seems relatively evident the massive gameplay changes that don’t relate simply to mechanics will come with the NBA 2K21 next-gen platforms only. I can’t say that I’m that impressed so far. 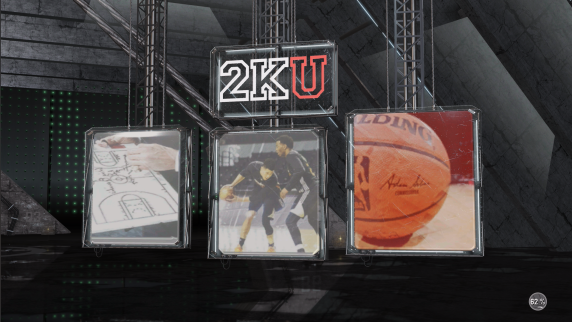 Brian O’Neill: Agreed, the only difference I can see is the shooting mechanic (not a fan so far) and maybe a couple of new animations. Otherwise, it looks and feels like 2K20. I would much rather them let us dive into something like MyTeam for a couple of hours (obviously I’m biased there as the MyTeam guy), because it sounds like that mode is definitely going to be different and it might be nice to get a jump start. I also miss the Prelude from previous years. I don’t play a ton of MyCareer, but the years that I dove in the deepest were the years that the Prelude piqued my interest in the demo, probably because at that point I couldn’t be distracted by other modes like MyTeam or MyLeague. 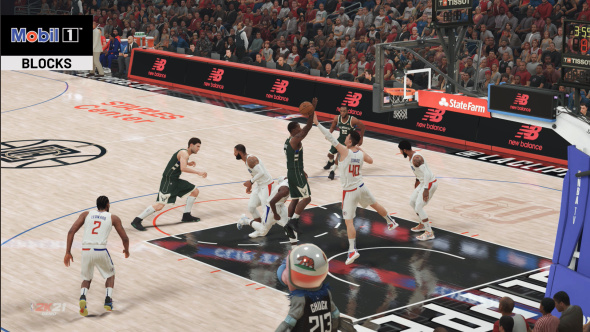 Jeff Botkin: From my experience with playing NBA 2K20 and now playing the NBA 2K21 demo, there very small tweaks from one version to the next. The transition game feels smoother in minor ways and the AI seemed to push the ball more aggressively down the floor. In the half-court game, AI player movement was more active in back cuts and patience in the pick and roll. These are minor details I noticed in gameplay as well as the player movement seeming slightly smoother. The shooting mechanic is different and timing is more difficult. I found myself using the X button rather than the stick. There was more fluid timing when using the X button after performing a sequence of dribbling moves. All in all, the improvements noticed in the demo were slight so I wouldn’t be surprised by people saying this game feels close to 2K20.