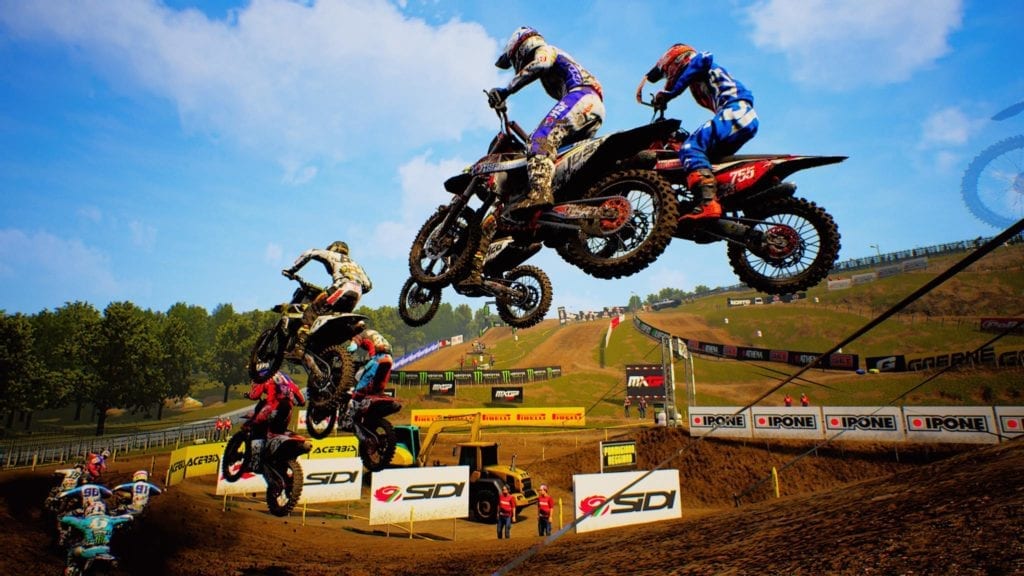 We are deep into Milestone’s run with the MXGP series, with MXGP Pro being the fourth in the series. While many fans have enjoyed the series, the one consistently desired improvement that has been the most common request? Please adjust and correct the physics. Milestone has absorbed that feedback and taken it seriously enough to implement a brand new physics system into a game that is on its fourth iteration. That’s a huge deal in the gaming industry, but does the new system actually work and improve upon its predecessor(s)?

There is no doubt this series can be challenging to newcomers, and even frustrating to veterans of the series with its level of difficulty, but the bottom line is that my level of enjoyment with MXGP Pro has continued to grow each time I pick up the controller. As games become larger, more detailed, and more immersive, we sometimes forget to ask ourselves “are we actually having fun playing this?” That question is an absolute yes in terms of MXGP Pro.

One of the biggest complaints with the previous titles from Milestone’s MX series has been the lack of real physics, or the overall realistic feel of the bike. Most who played any of the previous titles would agree with this complaint, including myself. The developers looked to change this with an all-new Pro Physics system that aimed to make the bike, track and environment interactions more realistic, and the overall feel much more organic. To do this they enlisted the help of MX Champ Antonio (Tony) Cairoli, and the effort was well worth the result. One can feel the difference in how the bike handles and responds, and not only in how it reacts to the track, but also in the way it deals with weight distribution, cornering and landing. It’s true, it will take you a bit to learn the new system, but it would be extremely hard to go back and play the previous titles knowing what I know now. 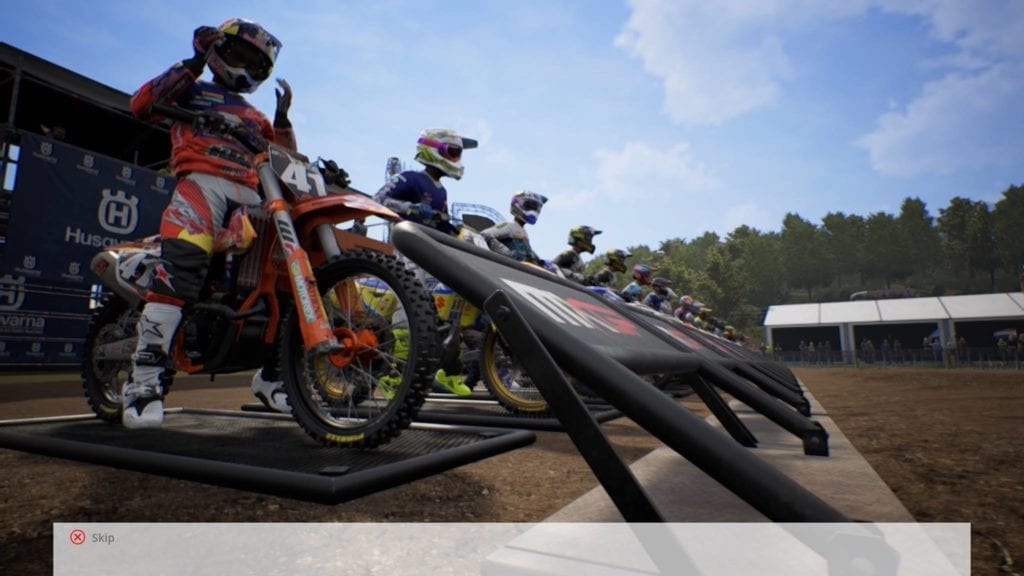 I am not going to compare MXGP Pro to some of the best looking titles on the market today, as that would be misleading. What I can say is that they have improved the overall look of the game enough for me to be impressed and surprised. MX racing is not a clean sport, and it shouldn’t feel that way. Luckily, MXGP Pro creates an authentic feeling of being beaten down by the environment, which is way cooler than it sounds. The track surroundings look better and more natural, the bike models are beautiful, and the track degradation looks and feels much improved. They have pulled this off all while still maintaining a solid frame rate on my PS4 Pro, although at a couple of tracks I did experience a minor frame dip for a split second. On top of the title’s improved graphical fidelity, the sound comes in a close second. The bike sounds great, the interaction with the track sounds realistic, and the overall sound and feel of a race weekend comes across exactly as one would hope. 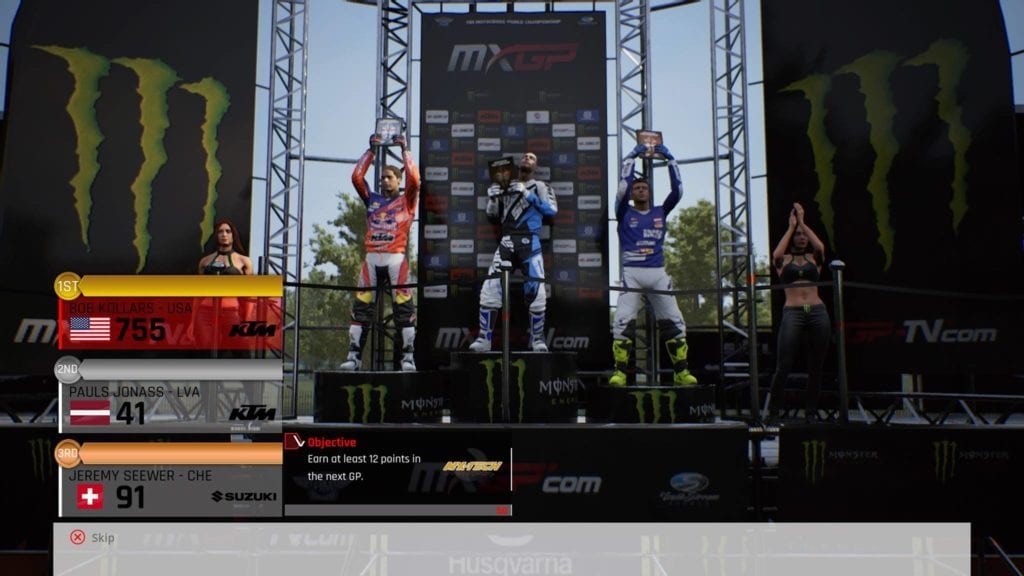 As much as I love the on-track action that MXGP provides, things get a bit dicey when it comes to the overall depth of the title. That’s not to say that MXGP only offers “race now” and that’s it, but the choices are a bit limited. Single player does offer up a few different modes that will help with replayability, but online is where the lack of depth really hurts. The single-player experience I mentioned gives the user a chance to participate in a single race/grand prix, time attack, career mode, or a full championship, which is nothing ground breaking but enough to keep one satisfied for a bit — assuming you like racing AI opponents. One of my biggest complaints is that certain modes and abilities have been removed from Milestone’s previous title, Monster Energy Supercross. One of the items removed was the awesome track creator that was introduced in Monster Energy Supercross, and of course, the ability to share said created tracks with the community. I have no information as to why the removal took place, but it’s gone and the overall enjoyment of the game suffers because of it. It’s hard on a community to introduce a great in-game asset like the track creator, which was so well received, and then take it away without explanation.

Title depth also takes a hit when it comes to MXGP Pro online, as it has its own set of problems. A welcomed aspect of Pro is you can set up a full championship to race against friends and AI (which is awesome), but on the other end of the spectrum, there is no lobby system to speak of, which is almost unforgivable in 2018. On top of no lobby system, the title provides no way for the user to search exactly for who, what and where they want to race. Overall, it’s a poor system that at best feels archaic, and at worst seems like an afterthought. MXGP Pro should have an online stable that provides multiple opportunities for the community to enjoy the game, and the reduction and removal of these modes is perplexing.

It feels a bit odd listing career mode as something I didn’t like, because this is where a lot of people will spend the majority of their time, as did I — and enjoyed it immensely. The problems begin with depth (again) and choices given to the user. If you played NBA Live 18’s franchise mode, then you will understand my frustration with MXGP Pro’s career mode. Yes, all the basics are there, but it becomes incredibly repetitive, with each race just feeding into the next, with none of the minutia that helps create a feeling of immersion. Is it a game breaker? Of course not, but as one’s career progresses, the linearity of it all can become mundane or monotonous to a degree, and those are adjectives no developer wants attached to a mode in its game. On top of the lack of depth, is the lack of personal rider customization. Users are still forced to utilize a PS2-era type of player-creation system, and that’s for a title on its fourth iteration; it’s sad we still have to choose from a handful of characters with extreme limitations. The racing and competition in career mode are definitely strong enough to carry it on its own, but it shouldn’t have to. 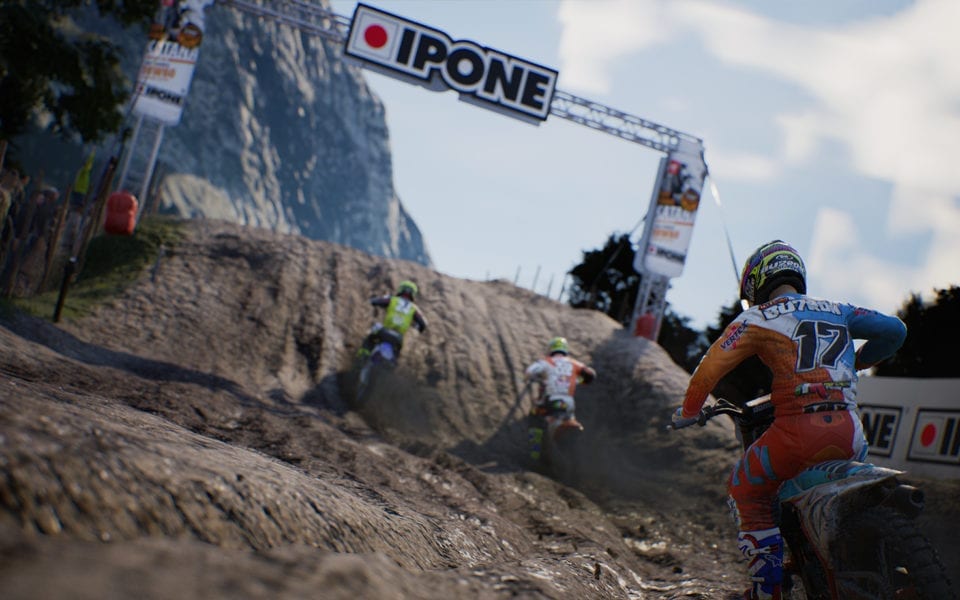 Does MXGP Pro fail miserably in regards to the presentation of the sport? Absolutely not, but it could have been much more robust. This specifically hits hard during career mode, but can be felt throughout the title as a whole. The game does offer a small track introduction and a quick glance at the starting gate, but we need more. The tracks are absolutely gorgeous in this game, and they deserved to have a full breakdown before each race. Also, there is a small podium shot at the end of each race showing the celebration of the top three racers, but that’s it. There are no in-depth track breakdowns, no flyovers showing the weekend attendance, no storylines to add immersion and drama to one’s career path, and no true celebration of the sport and the weekend. It feels like the absolute minimum was done in terms of presentation, and that’s a shame because an officially licensed title such as MXGP Pro deserved more, especially with the gameplay being as solid as it is from moment to moment.

MXGP Pro is going to beat you, bang you, twist you, and may cause you to have to stock up on controllers at the higher difficulties, but that doesn’t mean I didn’t love my time with it because I absolutely did. For me, this is the MX racing title that many have been wanting for, for a long time. True, it may not be as deep or polished as we were hoping for after the release of the Monster Energy title from Milestone, but it still is worthy of purchase for anyone who has even the slightest interest in the sport. There is a lot of fun to be had with MXGP Pro, and it’s a title that should find its way into your catalog of games sooner rather than later.

Mario Tennis Aces Review: An Entertaining Experience
F1 2018 Review: Perhaps One of the Best Racers Ever