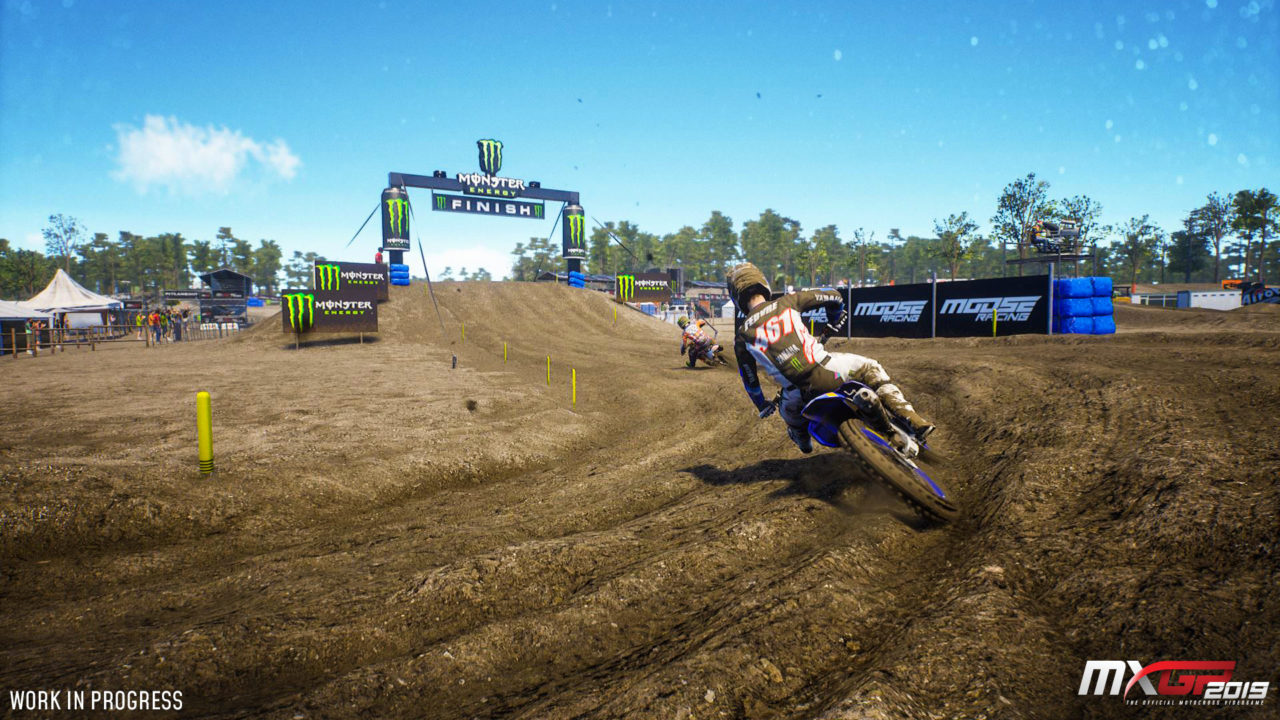 For most of the sim racing community, there has been lengthy run of solid racing titles as of late, and Milestone has been a big part of that. With the recent news of Milestone being purchased by THQ, the racing community has no idea what the direction of the MXGP and MESX series will be moving forward. So if this is the last hurrah, let’s find out if it’s a worthy one.

Milestone keeps improving the overall game physics every year with their titles, and MXGP 2019 is no different. The improvements are tangible and are even noticeable for veterans of the series. From the way the bike interacts with the track and its surroundings to the collision detection and interaction between you and each opponent, the reaction plays out realistically and the improvements bleed into every mode of MXGP 2019. 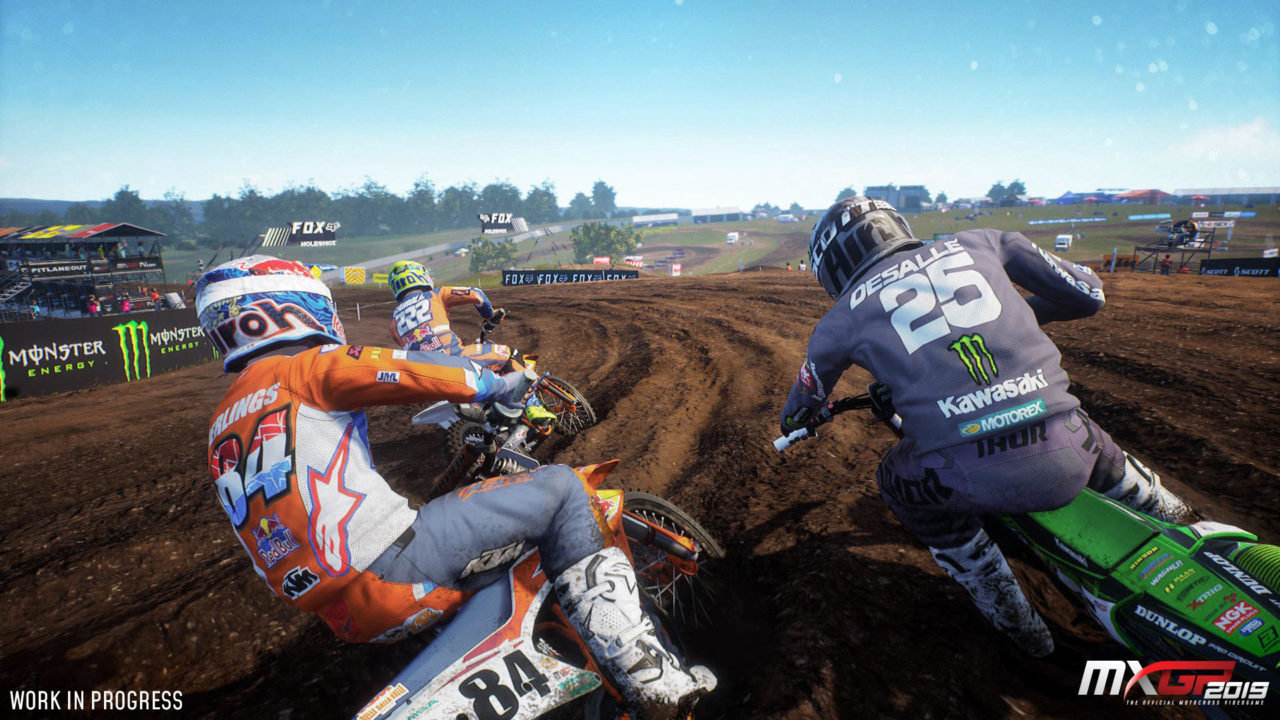 While the physics have gotten better with each installment, in the past players were often met with scenarios of their driver “bouncing” off other drivers. In addition, strange interactions with the bike and its surroundings occurred enough to be considered problematic. In my many hours with this year’s title, I have seen very few instances of this happening, and few enough to describe them as an anomaly.

If you have played the sister series to MXGP, Monster Energy Super-Cross, then you will feel right at home with the track creator in MXGP 2019. The creator is a bit thin on peripherals but has strong on-track creation tools. Even better, there is an informative tutorial in the beginning that walks you through the standard process of creating a track, and this tutorial can be referenced at any time if you find yourself struggling with your creation.

Graphics Holding Up Late In Generation

It is quite evident that Milestone has a firm grasp on the engine(s) used for the MX series as the graphical improvements are quite noticeable, and at times, stunning. MXGP 2019 delivers some of the best track deformations I have ever seen in any off-road game. Not only can you see deformations forming and changing, but you can feel every bit of nuance the changes create. 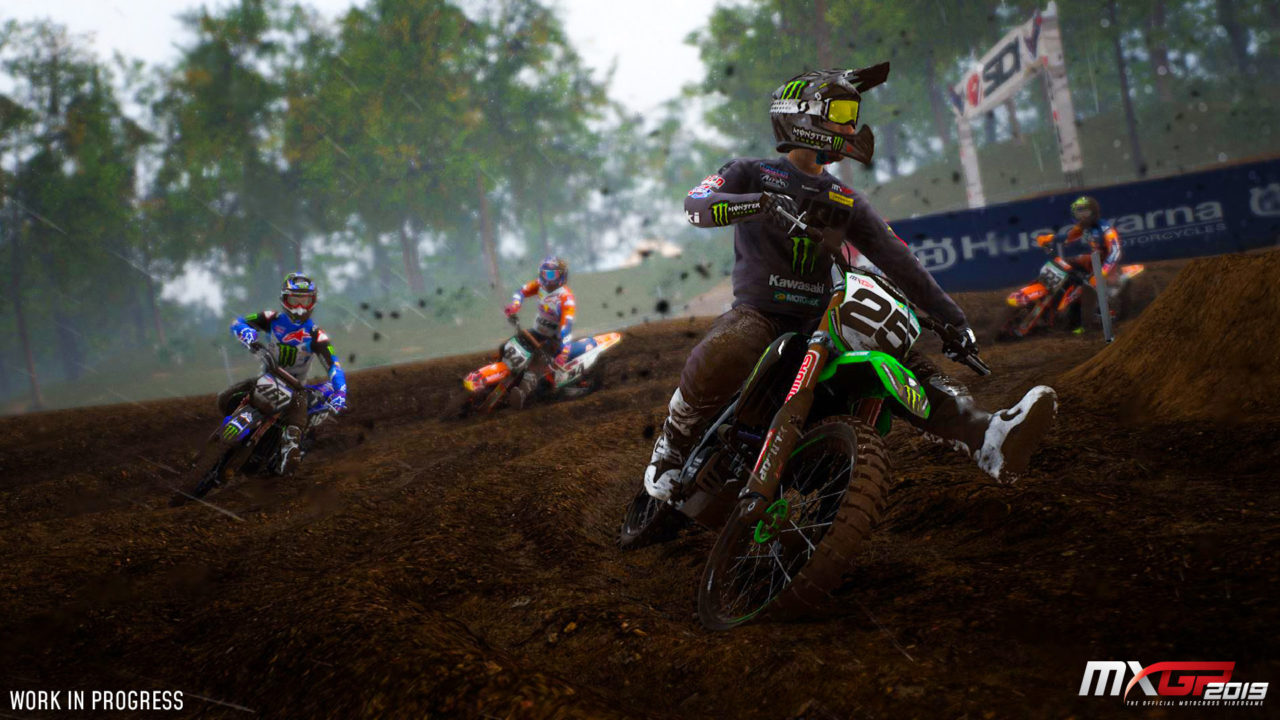 The race-day weather is another major coup for the developers. The rain and clouds play a considerable role in the overall atmosphere and track ambiance. Couple that with the weather’s ability to change throughout the day, and the whole race-day experience is a tremendous accomplishment for Milestone. One oddity is that if the weather does vary from wet to dry, the track tends to dry out extremely quickly. It’s not a game killer by any stretch, but it was odd enough to stand out to me. 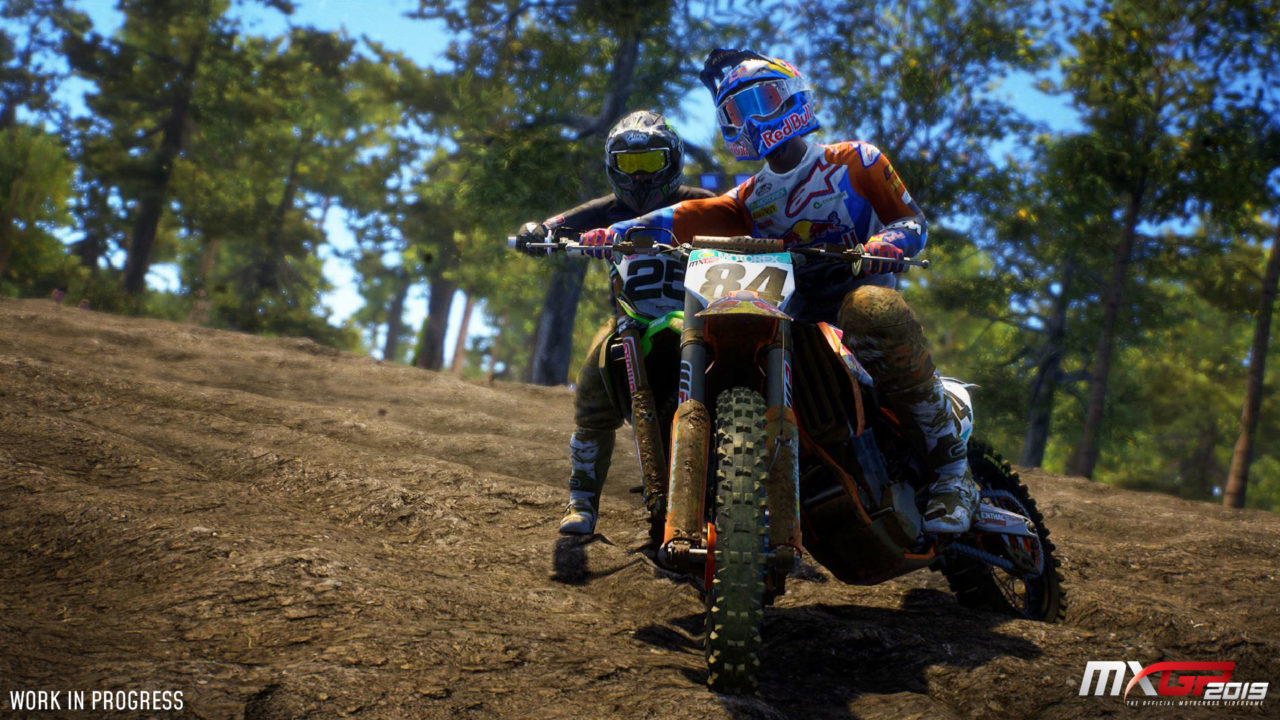 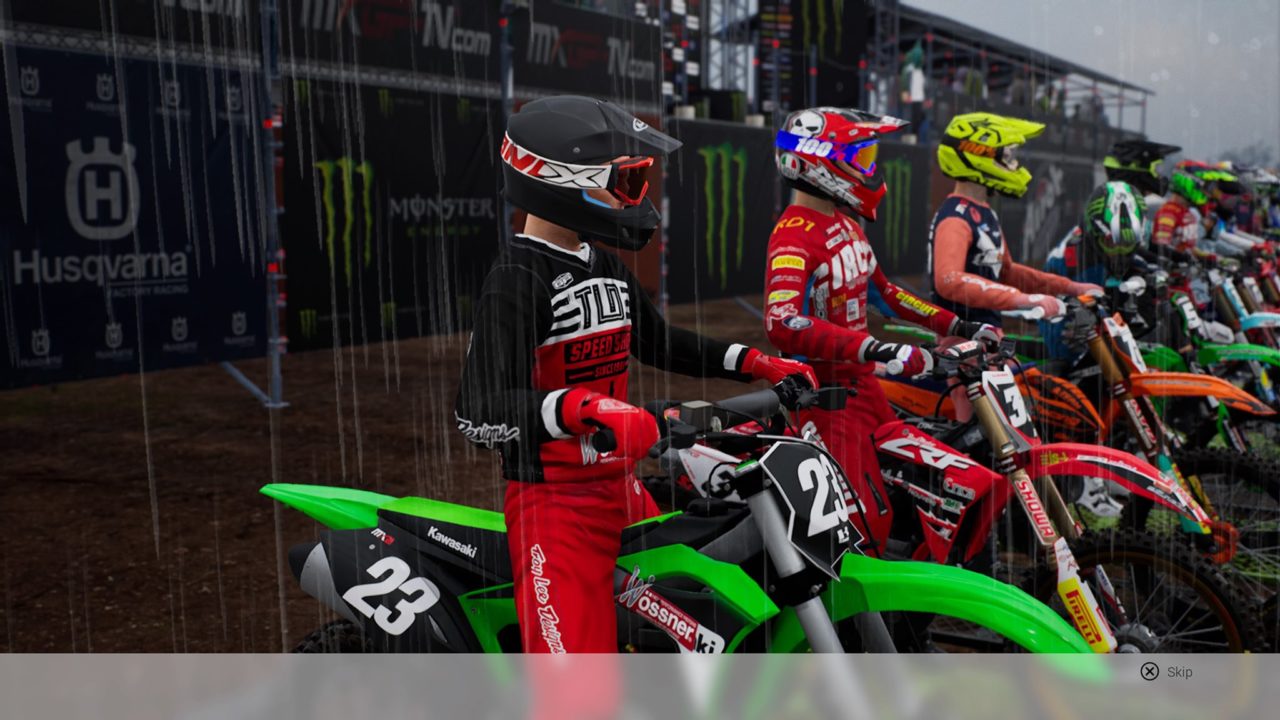 The lack of presentation in the MX series has been a long-standing complaint of mine. MX racing is such a fantastic sport, with some incredible venues, large crowds and intense action. So while the presentation has been streamlined for MXGP 2019, the game still lacks flare when it comes to such a wonderfully exciting sport. I would love to see flyovers, track difficulty breakdowns, haulers being unloaded and — well, you get the idea. Listen, I understand many prefer not to have long drawn-out presentation sequences, but quick hits can still be very useful, and it could add so much to the overall atmosphere of the game. 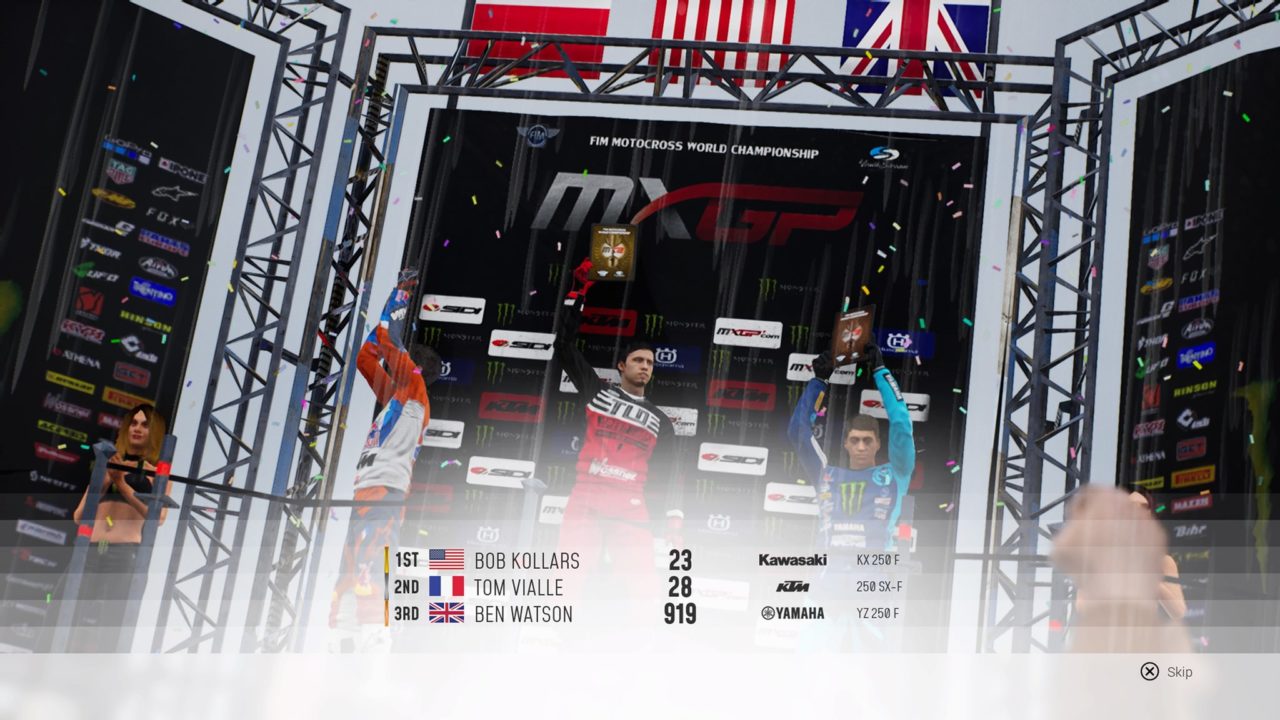 I do not hate the career mode in the MX series, but the problem is we are now heading into “stale” territory because there have been very few upgrades over the past few years. If it were not for the UI and streamlined presentation, most people would have a hard time distinguishing MXGP 2019’s career mode from the previous version. Overall, career mode is once again a fun journey in the quest to become the best, but we have been on this same quest for a few years now.

I have been complaining about the lack of depth in the online suite offerings for the MX series for quite some time now, and it is evident, that Milestone must have data that says not many people play online. I say this because the same options appear year in and year out. What is there is fine, but the problem is that there isn’t much substance. The servers are stable, the option to race against AI and human opponents is fantastic, but the choices are just so limited, and have been for some time now.

MXGP 2019 received some key upgrades in relation to bike and rider physics, game modes and in the UI department, but I am not sure that is enough to describe it as an absolute must-have title for your rotation. Having all the licensed drivers and bikes for MXGP 2019, and the inclusion of the track creator, help justify the purchase for me. However, the lack of career mode improvements, thin online options and average overall depth hold the title back just a bit. In the end, there is some fantastic racing and robust AI here for those who do decide to pick up MXGP 2019.