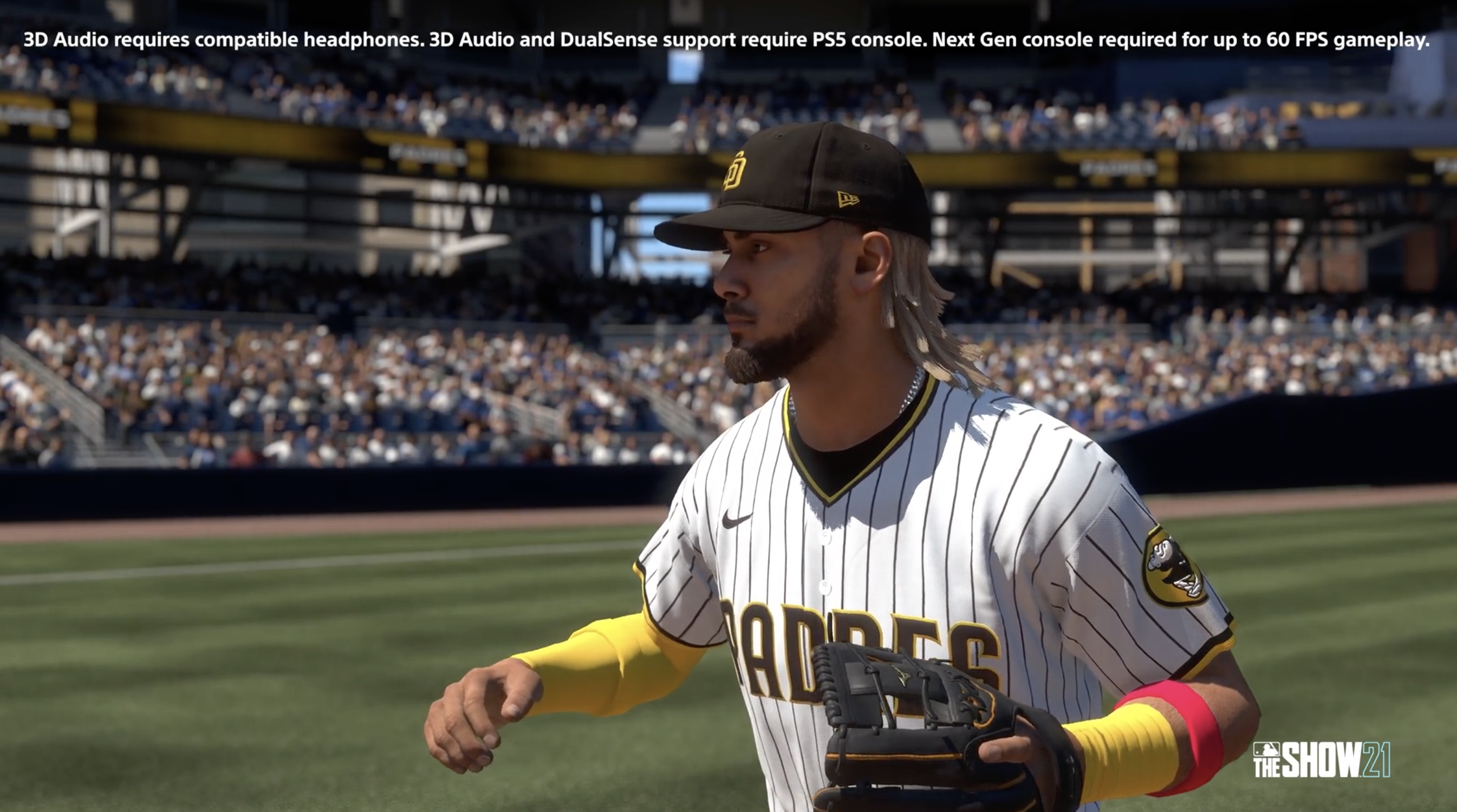 In many ways, it’s harder than ever to try to predict player ratings in MLB The Show 21. Considering how shortened the 2020 season was, there’s the lingering question of how much trust the developers at SDS will put into a season with a smaller sample size. Will they still just go with the aggregate of the last three years (with a weighted impact towards last season), or will they instead take more of a four-year look and count last year as a bit of an anomaly?

Despite the added level of difficulty, I’m going to take a stab at guessing the MLB The Show 21 overall player ratings of the best players at every position. Along the way, I’ll also highlight some players who can be expected to have some big gains and losses coming off MLB The Show 20. 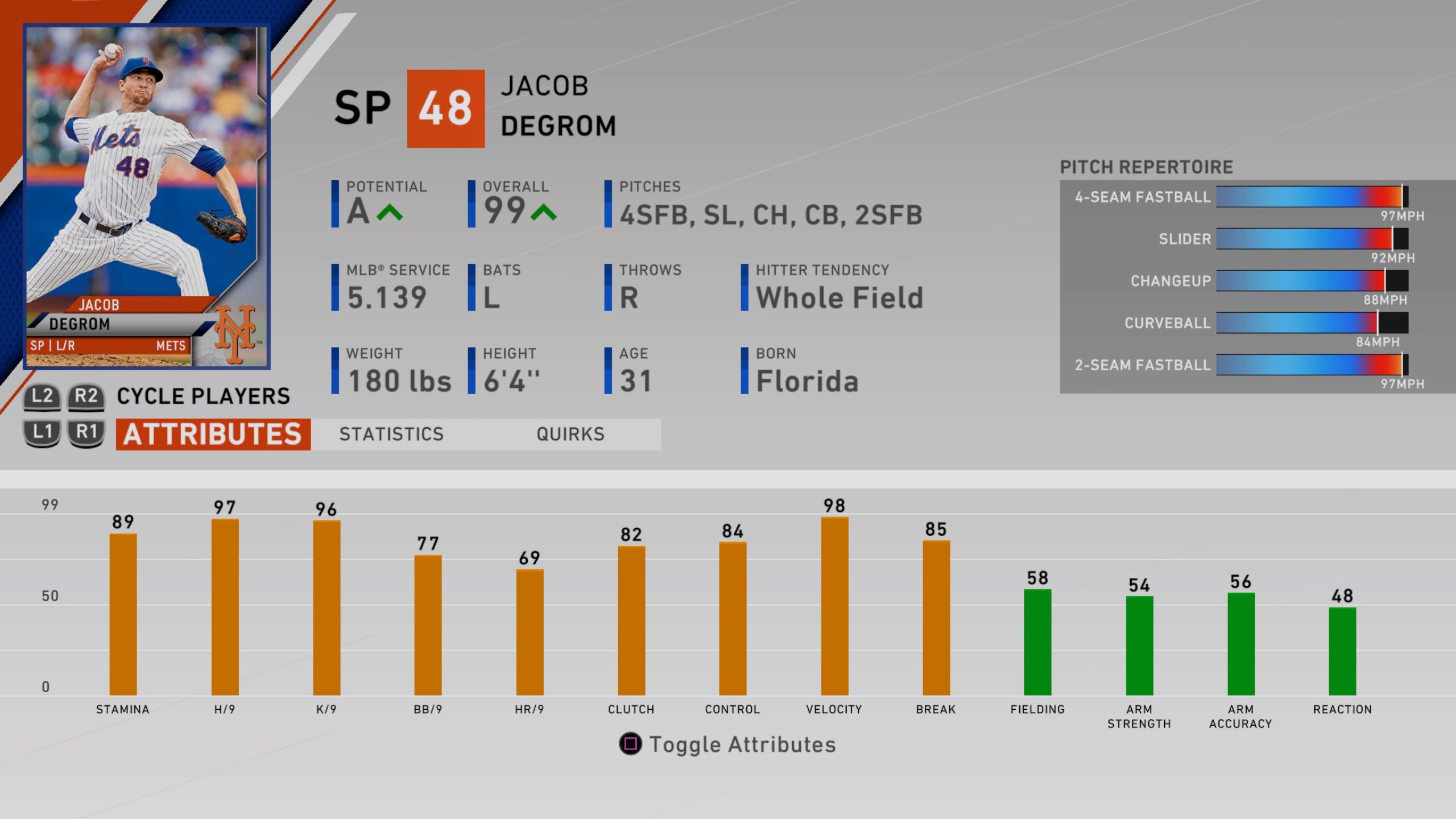 This is maybe the toughest call to make with so many great starting pitchers worthy of consideration for the highest overall rating right now, but I’m going to give the edge to deGrom for his sustained success in recent years. The 2020 Cy Young winner Shane Bieber had an impressive 8-1 record and 1.63 ERA, but deGrom has been more consistent the past couple seasons and his 2020 wasn’t too shabby either (2.38 ERA).

It’s been a bit of an adventure for Burnes thus far in his career. He’s gone from a wonderful debut in 2018 to a putrid 2019, and then all the way back to a stellar performance in 2020’s shortened season. He’s definitely due to be getting a substantial bump thanks to his 2.11 ERA in his nine starts last year.

Bumgarner’s 2019 season already showed signs that his best days were potentially behind him and that impression only grew in 2020. He struggled to a 6.48 ERA over his nine starts. His overall rating plummeted a whopping 12 points from the start of the season to the end, but it’s unlikely they’ll have him quite so low to kick things off in 2021. 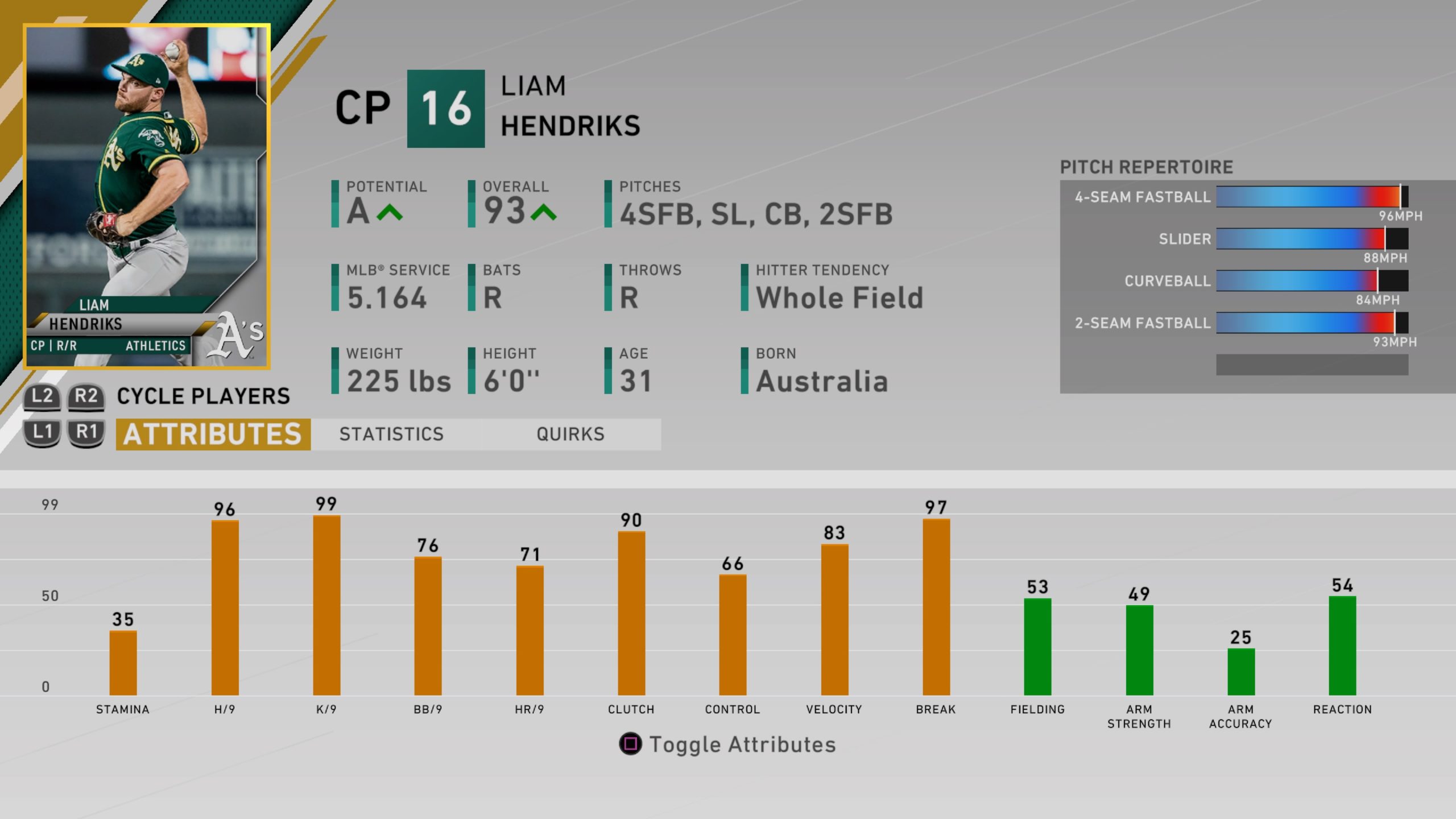 As with starting pitchers, there are plenty of candidates here, but Hendriks deserves to be the highest-rated reliever in his fresh start with the White Sox after five years in Oakland. After all, her performances in 2019 and 2020 ended with him maintaining a sub-2.00 ERA over both seasons.

It’s a little hard to predict what they will do with the Brewers’ Devin Williams in MLB The Show 21. He was just a 51 OVR when the game was released last year, but then he proceeded to have one of the most impressive rookie seasons (0.33 ERA over 27 innings with 53 strikeouts) by a reliever in history. I’m banking on him sticking pretty close to the 80 OVR he is in the current MLB The Show 20 rosters.

There’s always the chance that Kimbrel could recapture the kind of magic he had in his glory days when he was with the Red Sox, but his last couple of years for the Cubs have been awfully disappointing. To make matters worse, he’s continued to struggle so far in spring ball (even though that can often be meaningless), so it’s entirely possible his rating comes in even lower than the 74 OVR he is right now. 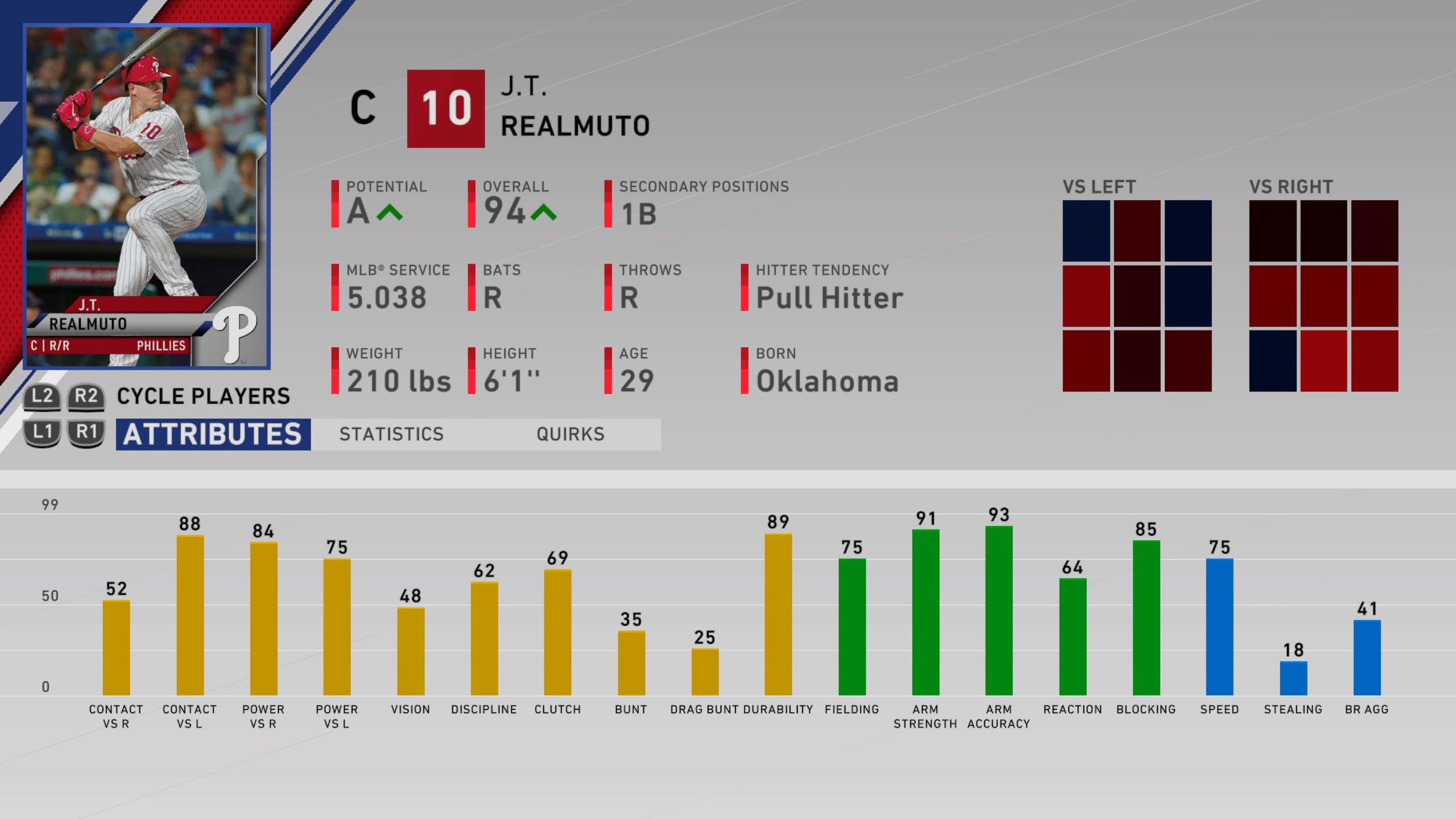 There isn’t really much of an argument to be made for any catcher in the game being better than the Phillies’ J.T. Realmuto. He’s been incredibly consistent with his offensive production over the last couple seasons, and the Gold Glove he won in 2019 tells you everything you need to know about his prowess behind the dish.

He wasn’t quite as good after he was traded from Seattle to San Diego, but Nola did enough last year (.273, 7 HRs, 28 RBIs for both teams combined) – and in limited action in 2019 – to showcase his versatility and skills to warrant a slight ratings bounce this year.

As much potential as Sanchez has shown as a Yankee, he’s also been forced to shoulder a lot of criticism for his poor defense and his frequent strikeouts. Things may have hit a new low after he limped to a .147 average in 2020 and that’s definitely going to cost him some when it comes to his rating in MLB The Show 21. 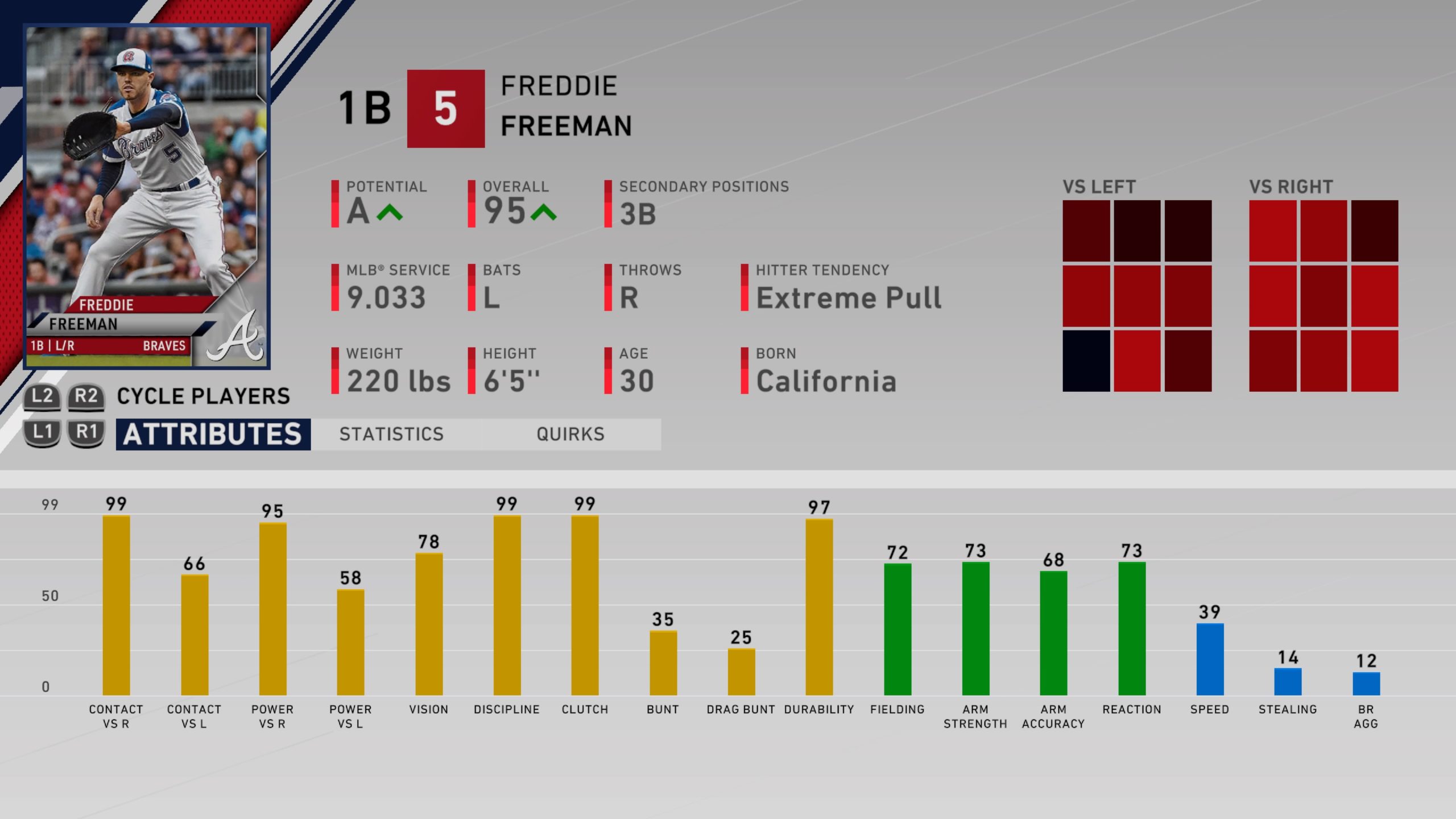 It’s a tough call between Freeman and Jose Abreu in trying to gauge who will be ranked higher because they have both amassed incredible numbers the last couple years and absolutely owned at the plate in 2020. Freeman seems like a slight favorite to get the higher rating because he’s younger (and better on defense) and that perhaps makes him a little more likely to keep it up in 2021.

Bellinger and Max Muncy split time at first base for the Dodgers in 2020, and neither one matched the All-Star performances from 2019. However, it was a little worse in the case of Bellinger because he was coming off an MVP season where he hit 47 HRs and amassed 115 RBIs with a .305 average (down to 12, 30, and .239 respectively in 2020). 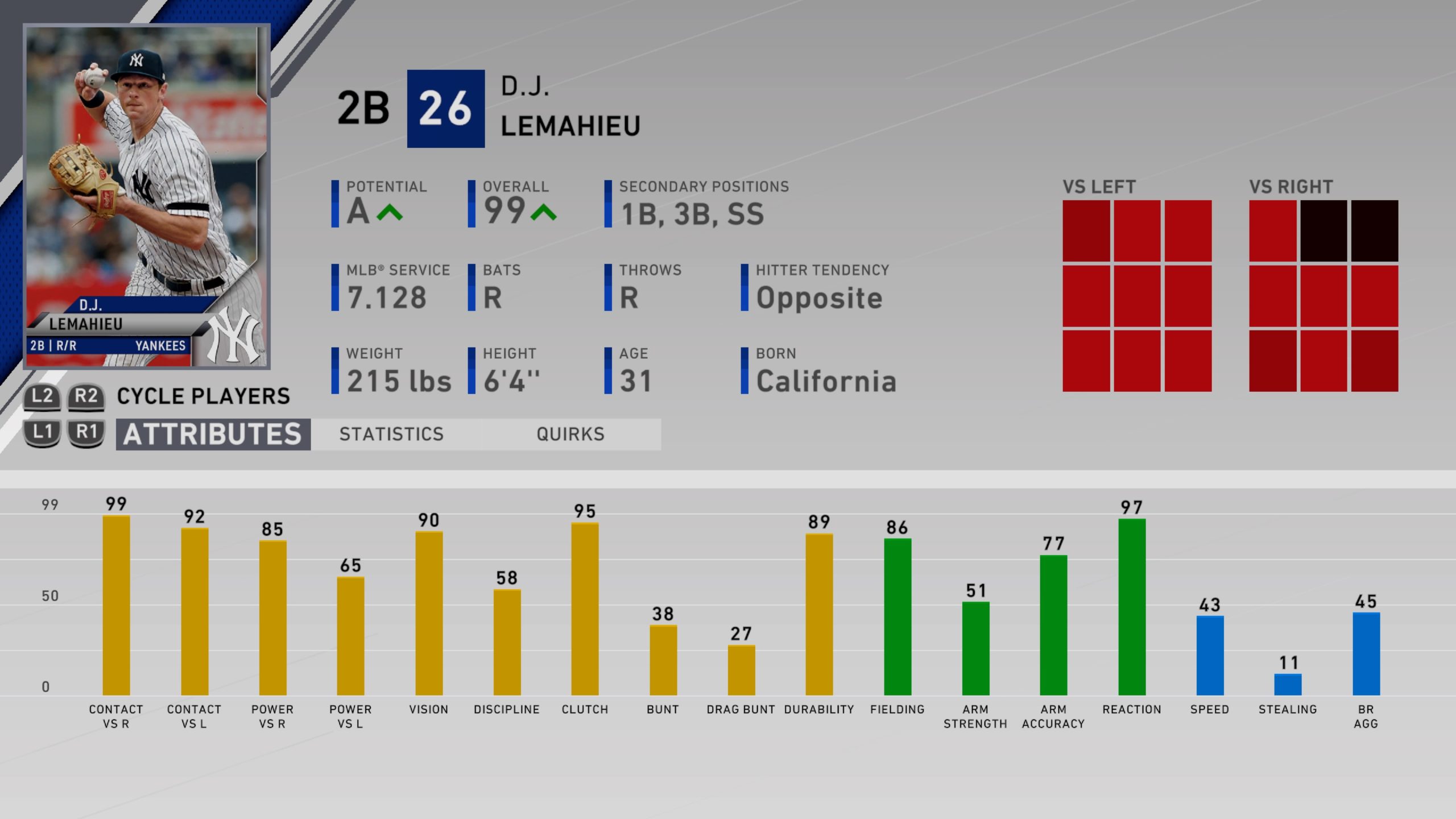 You could nitpick about LeMahieu’s power numbers coming back to earth a bit in 2020, but it’s still hard to ignore the league-leading .362 average he had at the end of the season. Since he’s a 99 OVR on the current rosters in MLB The Show 20, it’s easy to envision he’ll be graded as the best at the position in MLB The Show 21.

In an everyday role for the Giants in 2020, Solano proved that his impressive 2019 utility numbers were no fluke as he hit .326 while playing in 54 of the team’s 60 games.

By his lofty standards, Altuve straight up stunk in 2020, hitting .219 with only 5 HRs and 18 RBIs. We’re also far enough removed from his 2017 MVP season that his rating is bound to come down at least a couple points in this year’s game. 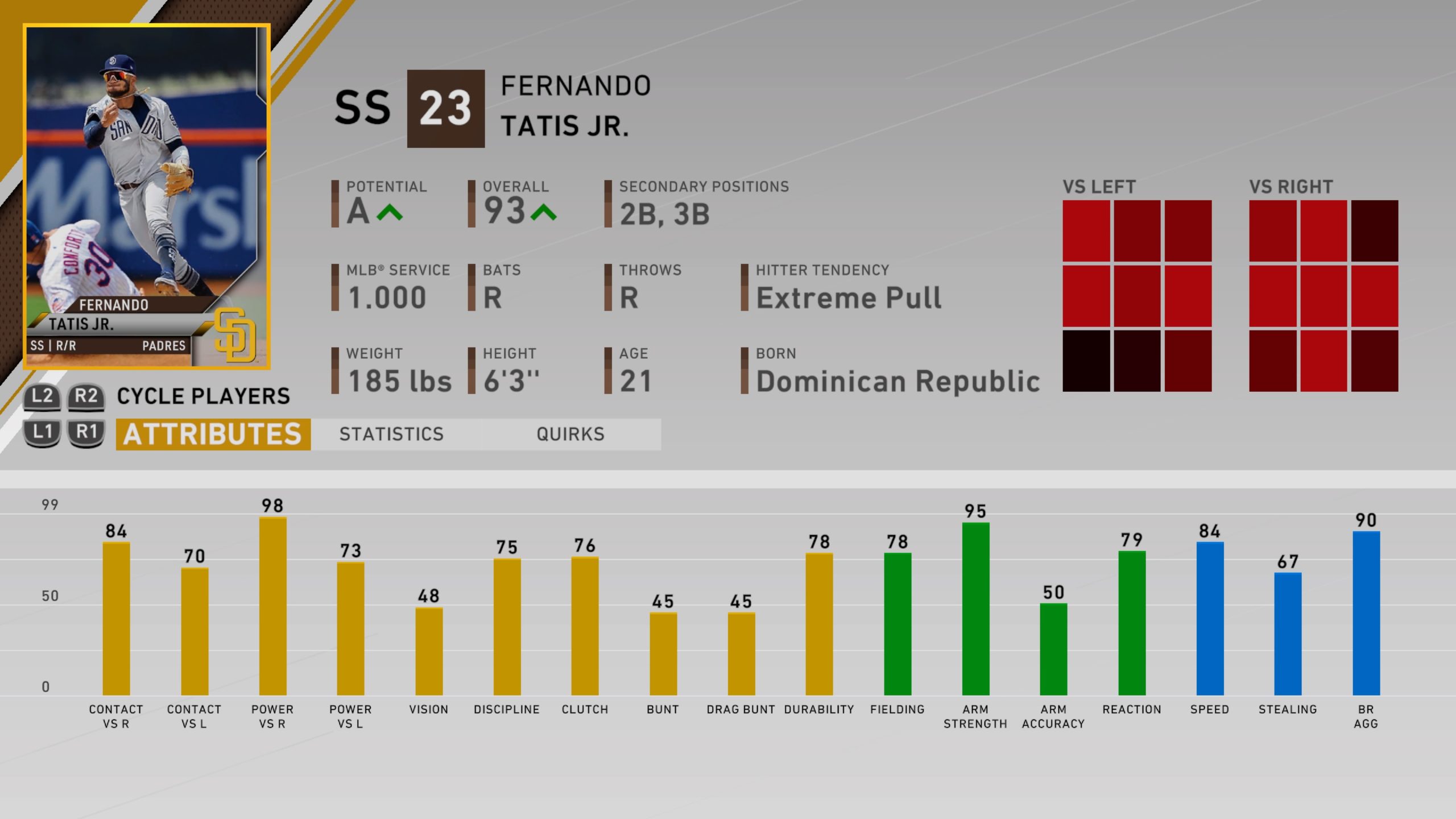 There’s no doubt about Tatis Jr. being the highest-rated shortstop in MLB The Show 21 considering he’s on the cover of the game, so the only question is whether they’ll bump him all the way up to a 99 OVR. I don’t think he’s quite there yet, but there’s a good chance they pad his rating a little bit because of all of the buzz surrounding him right now – and to help keep the cover athlete happy.

He was the MLB The Show 20 cover athlete, so do we have something of a Madden curse on our hands here? Despite hitting just .203 in 2020, Baez’s rating only dropped one point. However, now that he’s no longer on the cover, let’s see if his rating quietly slips below 90 at launch. 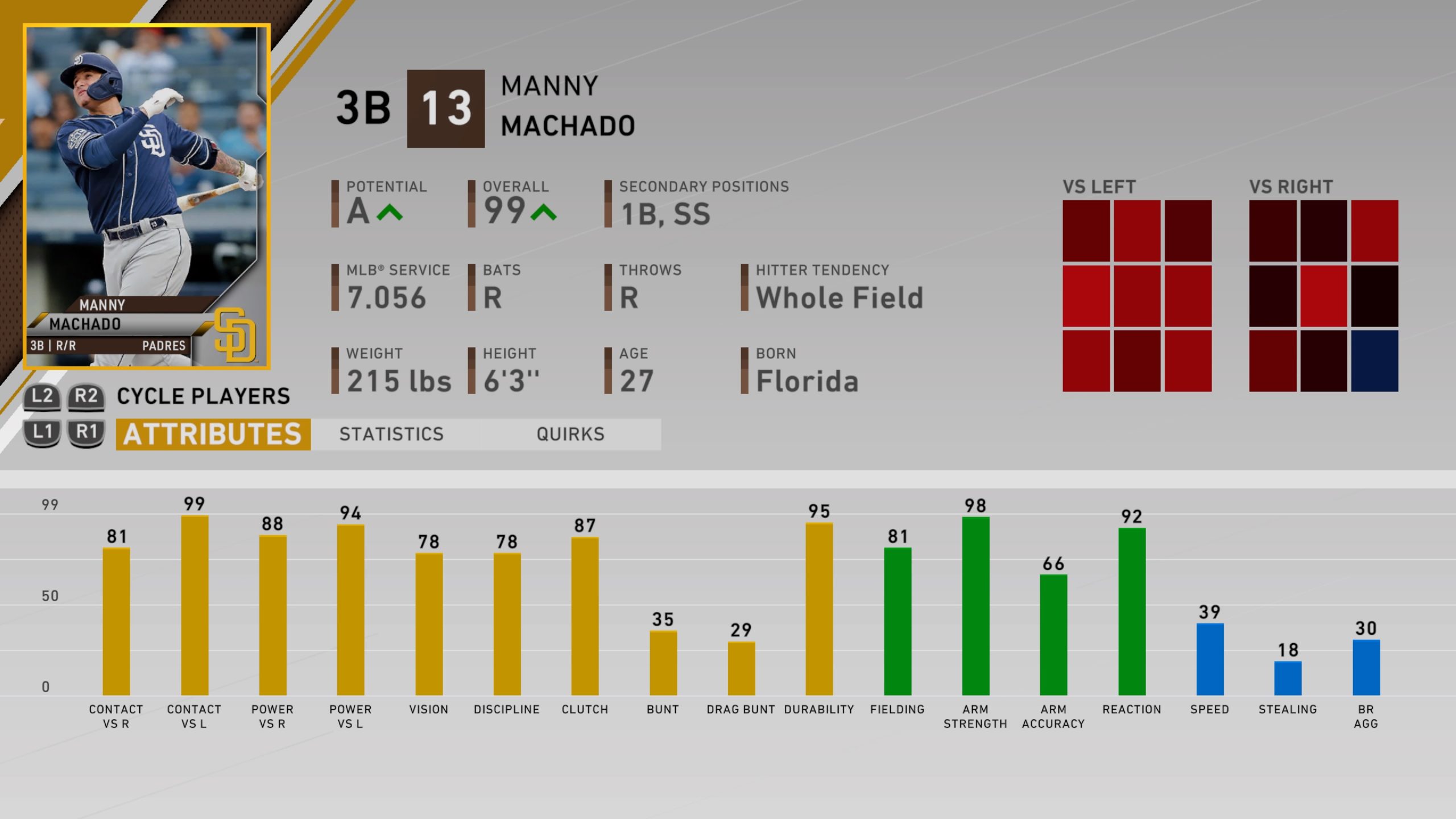 After a having a nice 2019 season in his first year with the Padres, Machado only improved his case as the best third baseman in baseball in 2020 by hitting over .300 and driving in 47 in just 60 games. If he were to keep up that torrid pace over the course of a full season in 2021, he would drive in an impressive 126 runs.

Ramirez will not be far behind Machado here (he may even be ahead). Ramirez played in 58 games and nearly matched Machado’s RBI total. If there’s one aspect of his game that might hold him back from being rated as highly as Machado, it’s his weakness in the field. He does steal more bags than Machado, but the defense would be the most likely thing to drag the overall down.

Alongside Javy Baez on the left side of the infield, Bryant was another concerning underachiever in 2020. Hitting a paltry .206 with 4 HRs and 11 RBIs in his 147 plate appearances, it’s quite likely he’ll rebound to have a season more like his 2017 or 2019 campaigns. In other words, the thinking here is they’ll only ding Bryant’s rating a little for a lackluster 2020. 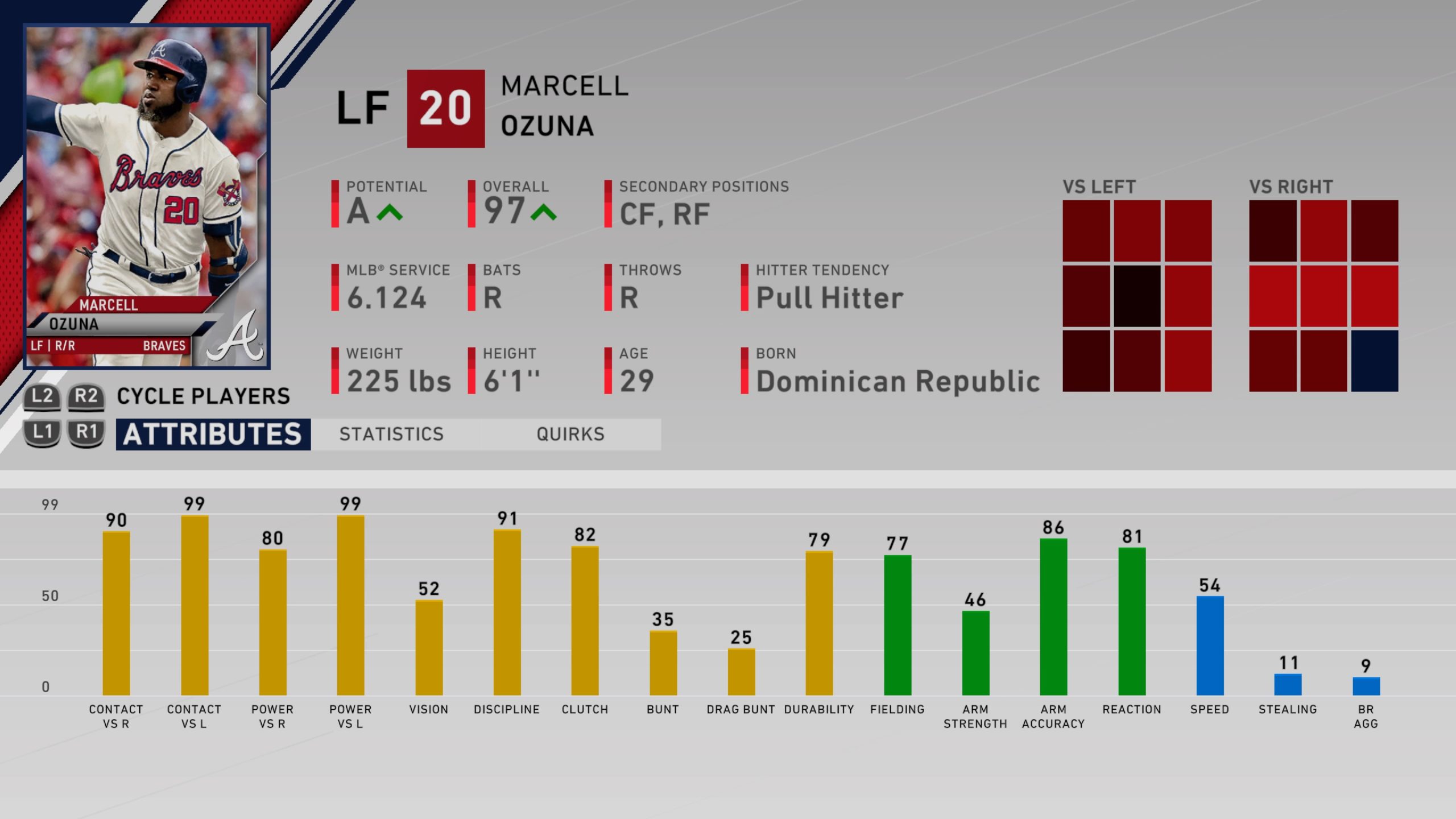 Ozuna’s 2020 was absolutely everything Braves fans were hoping for in his first season in Atlanta. He led the league in both home runs and RBIs (18 and 56 respectively, and he also hit .338). Over a full season, he was on pace to best his breakout 2017 All-Star season and improve upon his last two respectable years in St. Louis.

While Ozuna took advantage of the universal DH last season and didn’t play the field in most games, Adam Duvall was usually playing left field for the Braves and proceeded to swat 15 home runs. Now in Miami, Duvall will look to maintain that power (and maybe bring up his average some) over the course of a whole season like he did back in 2016 and 2017. 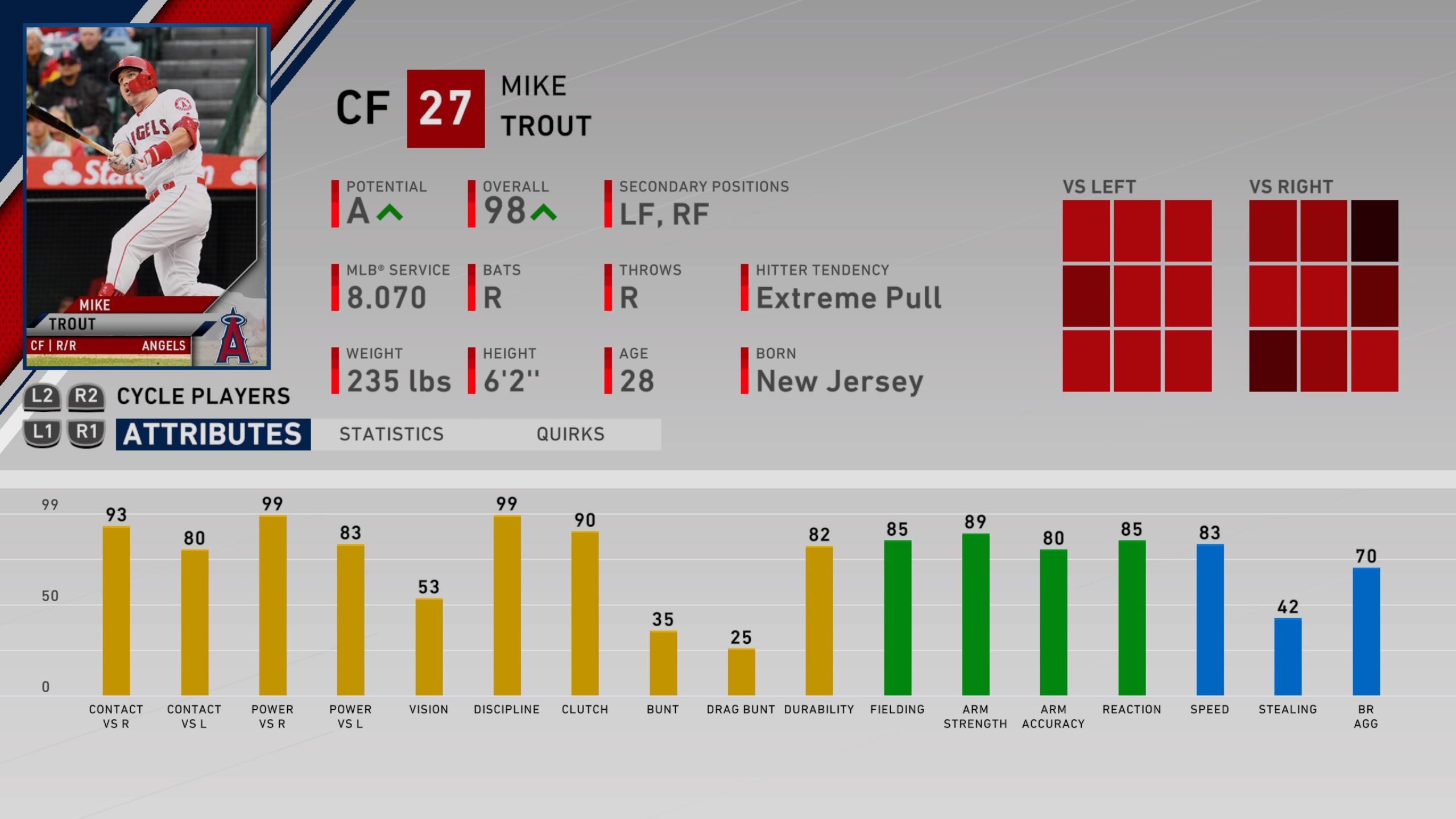 As you can probably tell from his 57 OVR rating, people weren’t expecting all that much from Lewis in 2020 because he didn’t have many at bats at the MLB level. He surprised many by hitting .262 with 11 home runs and 28 RBIs for the Mariners, which should mean he starts the 2021 season over 70 OVR.

Coming off surgery, 2020 was always going to be a challenging season for Hicks. The fact that his 79 OVR rating didn’t dip from where it was when ’20 was released shows he didn’t have the worst shortened season or anything (.225, 6 HRs, 21 RBIs). Still, he may have to pay a little for not being able to put up great numbers in both 2019 and 2020. I would expect at least a one point drop in his overall rating at the outset. 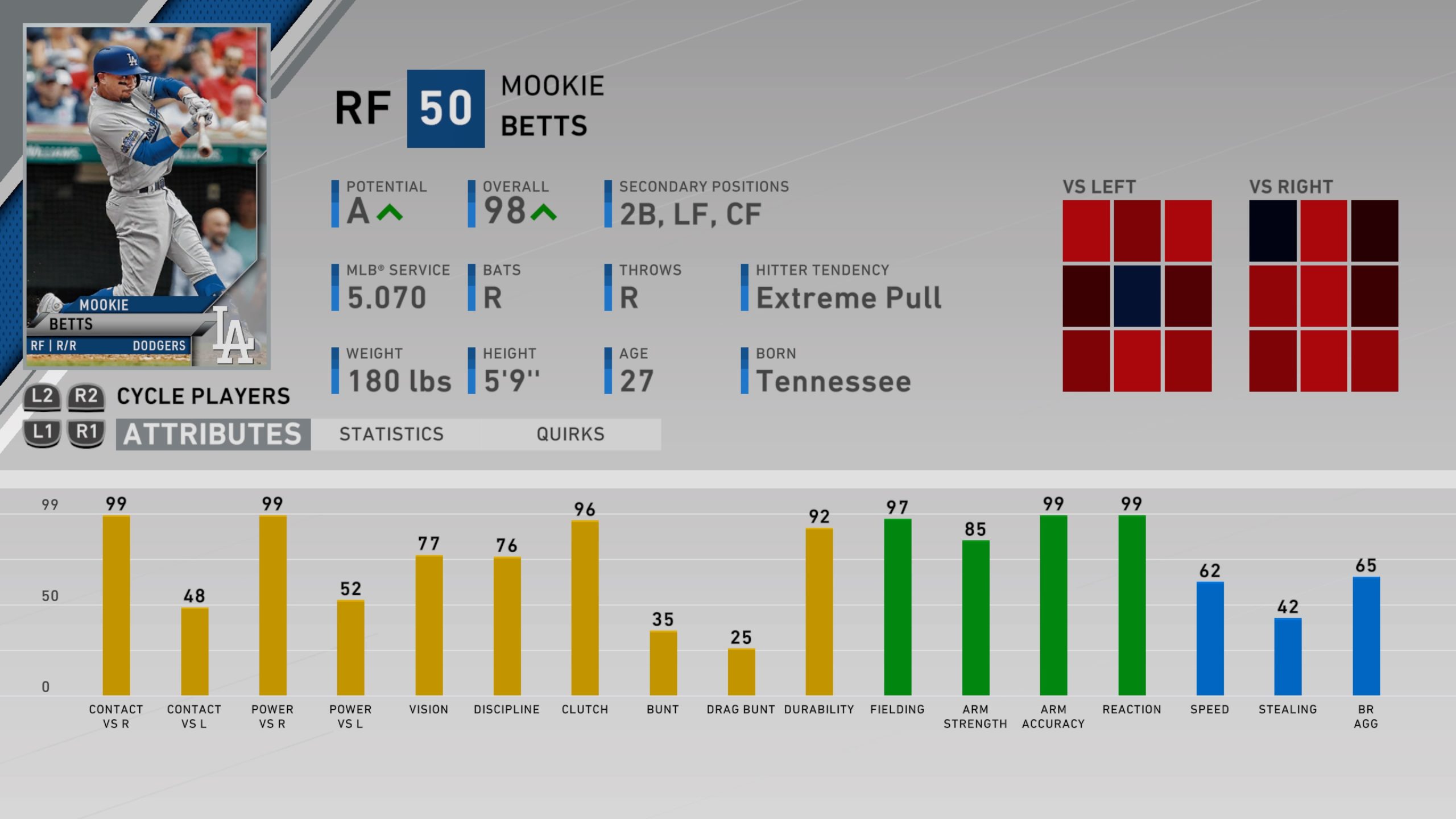 Betts made a pretty solid case for being on the cover of MLB The Show 21 after posting great numbers in both the regular season and postseason in 2020 while capping it off with a World Series victory. Either way, he’ll have to settle for being the best right fielder in the game and getting a slight increase in his overall rating.

Of all the Blue Jays players with breakout potential, Hernandez was the one who flashed it most in 2020 to the tune of a .289 average and 16 home runs in just 190 at bats. His overall rating jumped 16 points from the start of the season, and (as a Blue Jays fan) I expect it to stay relatively high to begin 2021.

Up until last season, Mazara was pretty much the picture of consistency while at the plate with the Rangers, in that you could count on him to hit just north of .250 and club 20 homers a season. But in his first year with the White Sox, he only managed to hit .228 with just a single home run in 149 plate appearances. I don’t think he will slide too far, but it’s bound to make his rating hover somewhere around 70 OVR.