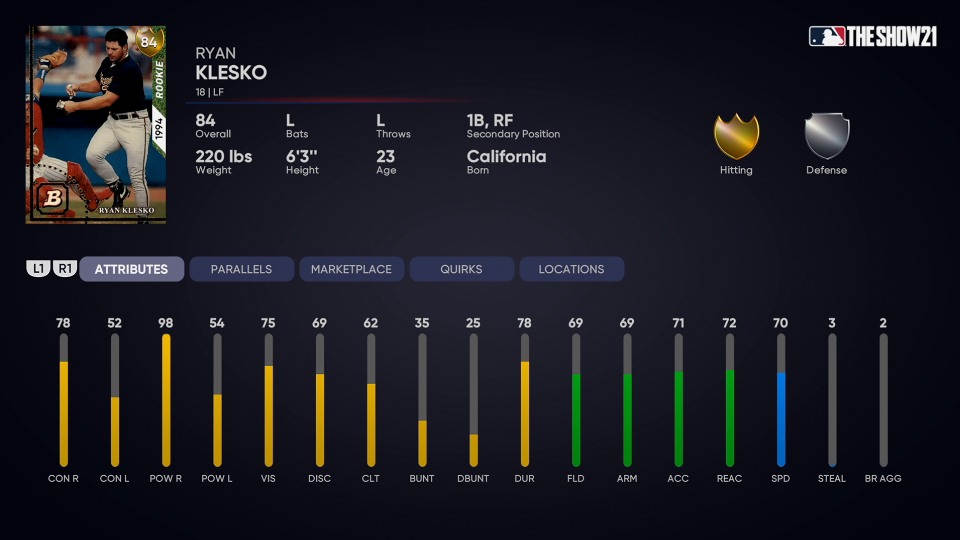 One of the biggest drawbacks of card-collecting modes in sports games has always been the difficulty in building a competitive squad when you don’t have the kind of time (or money) that others do to play the game. With many sports games, this will force you to have to regularly play matches online against opponents who have stacked squads, and those games can frequently end up being discouraging experiences. Luckily, that’s not as much of a problem with MLB The Show 21‘s Diamond Dynasty because the mode offers a lot of budget beasts at every position, with almost every single one available to purchase on the marketplace.

If you’re interested in tackling Diamond Dynasty and quickly putting together the kind of squad that can go toe-to-toe with even some of the most loaded teams that you will run into when you play online in Ranked Seasons, here are some cards you might want to consider to bolster your lineup and bullpen. All of these suggestions require either minimal effort or stubs to obtain, and they will help prove that you don’t need a single diamond card on your team to shine on the field. 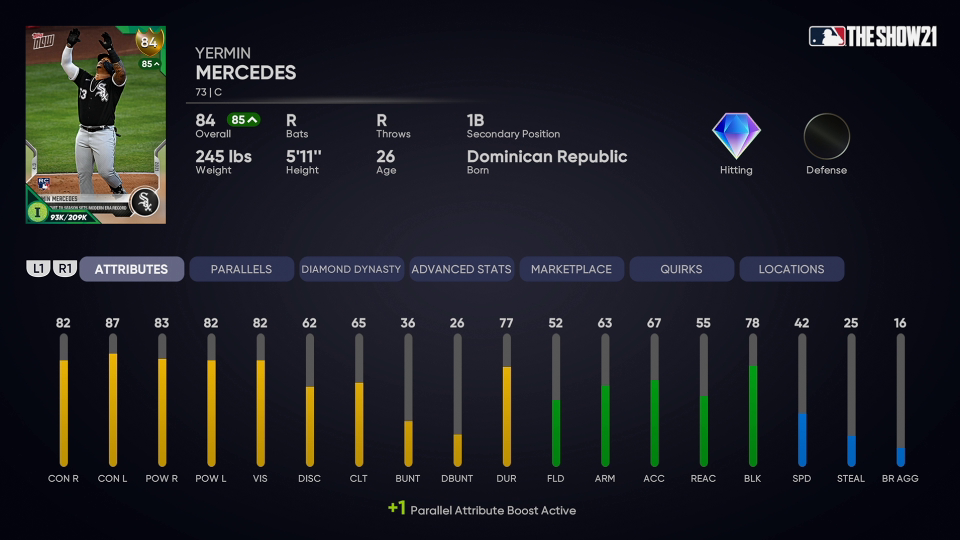 Available to add to your collection upon completion of the first group of Topps Now April Moments that were released (or for roughly 3-4K stubs on the marketplace), Yermin Mercedes is capable of giving you almost everything you could want behind the dish. His contact and power attributes are in the 80s against both right handers and lefties so there’s no worry about having to replace him against certain pitchers. As for the drawbacks, his speed is only about average for his position, and his arm certainly isn’t the greatest. However, it’s hardly bad enough to cost you too many stolen bases. 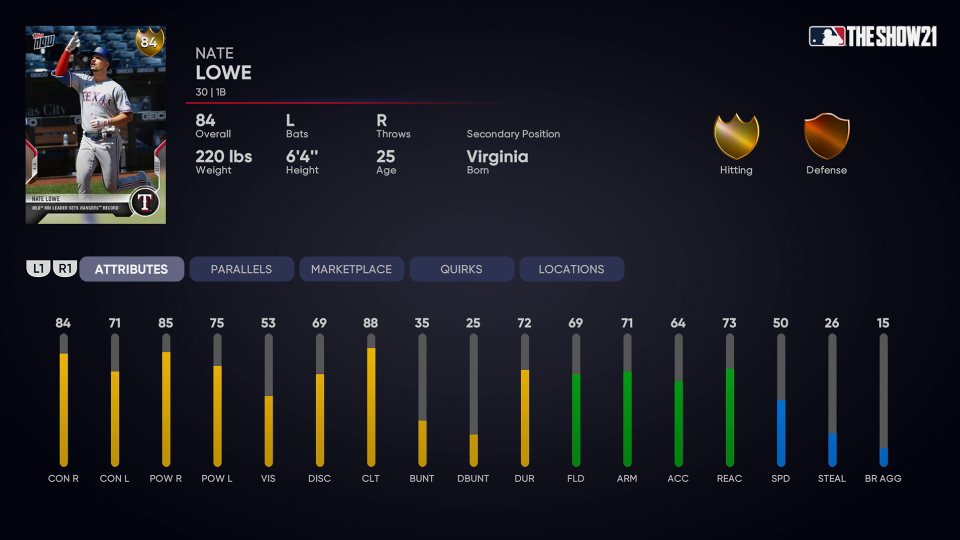 Another card that can be obtained by playing through a group of Topps Now moments (or 3-4K stubs if you’re feeling lazy), the Rangers’ Nate Lowe can deliver enough pop with his bat to make up for his slight shortcomings elsewhere. You’ll likely want some power from your first baseman, and Lowe’s 85/75 splits vs. righties and lefties in the power department will translate to plenty of dingers. Of course, his 53 vision might also lead to some strikeouts, but that kind of feast-or-famine approach is typical of power hitters in today’s game. 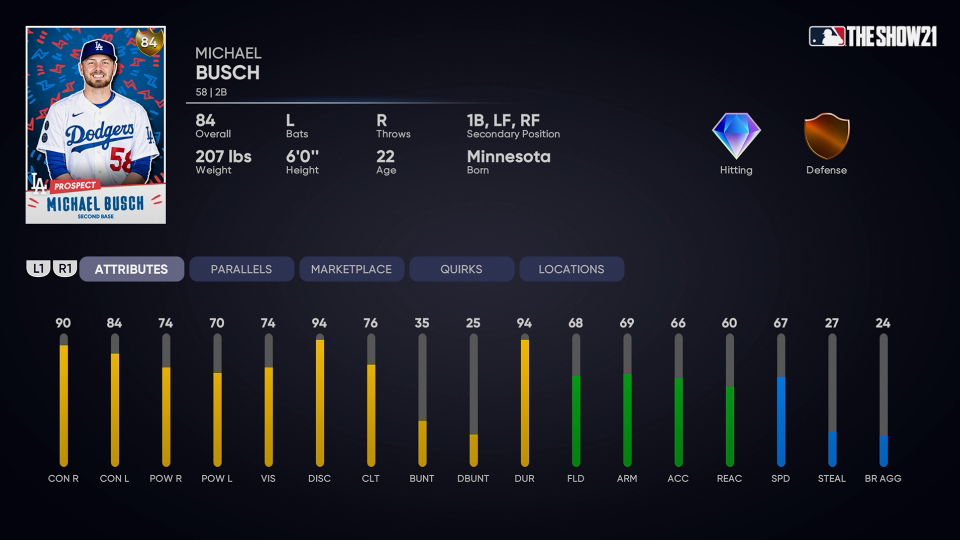 If you’re looking for a second baseman who can be purchased for approximately 5K stubs on the marketplace, Michael Busch is someone who can provide a balanced set of tools (alternatively, you can get Busch from conquering strongholds on the Nation Of Baseball Conquest map). His 90 contact attribute vs. righties (only dipping to 84 against lefties) and 67 speed mean that he can easily lead off in your lineup and regularly get on base. He might cost you a little bit in the field compared to more elite options (he has 68 fielding and 60 reaction attributes), but it’s not as if he will be booting balls or struggling to make routine plays or anything. 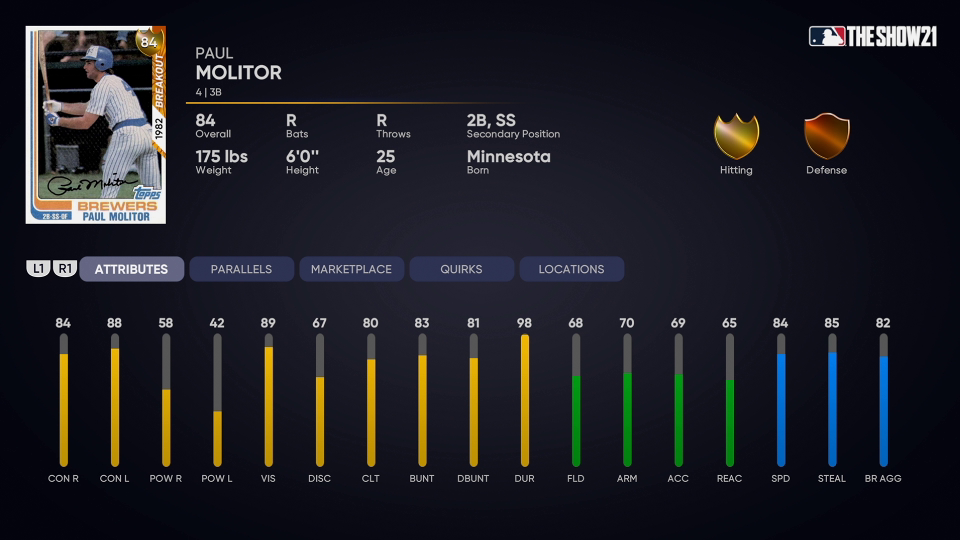 There are a lot of premium options at third, and that’s probably why you can pick up a completely decent player like this Breakout Paul Molitor on the marketplace for 1.5K stubs. Yes, his power attributes (58 vs. righties, 42 vs. lefties) likely won’t yield that many home runs, but the contact attributes (84 vs. righties, 88 vs. lefties) go a long way towards making up for that weakness. The other bonus with Molitor is that he he has 84 speed and 85 stealing attributes, meaning he gets on base a lot and he’s an absolute terror once he’s at first base. 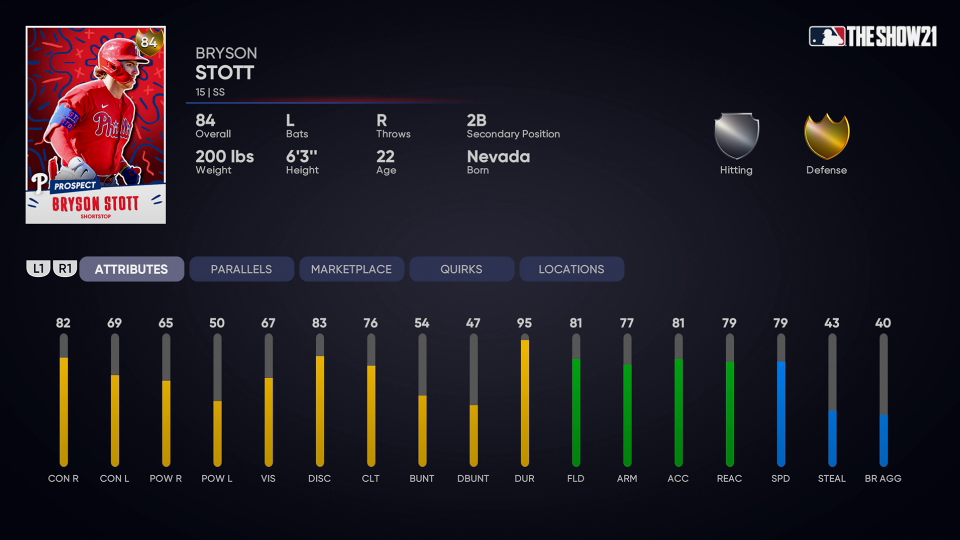 A prospect card just like Busch, Bryson Stott can be purchased on the marketplace for around 5-6K stubs (if you don’t feel like conquering any conquest strongholds). His left-handed bat has some pretty impressive attributes against right-handed pitchers (82 contact and 65 power). Those drop off some against lefties (69 and 50 respectively), but he also brings good speed (79) and defense (81 fielding and 79 reaction attributes) at a position where those skills can be especially valuable.

One of the cheaper cards on this list, this Ryan Klesko rookie card can be acquired for a measly 1K stubs and, at least against right-handed pitchers, he’s capable of creating havoc at the plate (with 78 contact and 98 power attributes vs. righties). Those numbers do dip quite a bit when facing southpaws (52 and 54 respectively) but, fortunately, the rest of his skills are almost all above average. Both his speed (70) and his fielding (69) are good enough to make them intriguing assets. 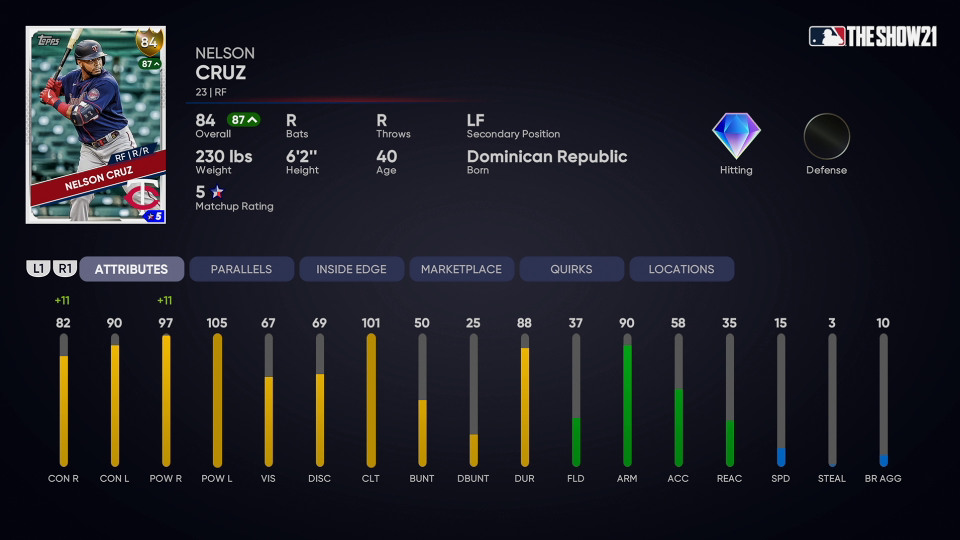 For better or worse, offense in baseball these days relies a lot on the long ball and that’s also the case in MLB The Show 21. So if you don’t have the stubs for some of the more expensive options at the position, you might want to consider spending 1K stubs on 40-year old Nelson Cruz, especially if you don’t mind sacrificing essentially everything else in favor of prowess at the plate. That’s right, Cruz has the kind of contact (82 vs. righties, 90 vs. lefties) and power (97 vs. righties, 105 vs. lefties) attributes you covet, but he’s really slow (15 speed) and is a liability on defense (37 fielding). He is capable of throwing runners out though when they’re trying to take an extra base thanks to his 90 arm attribute. 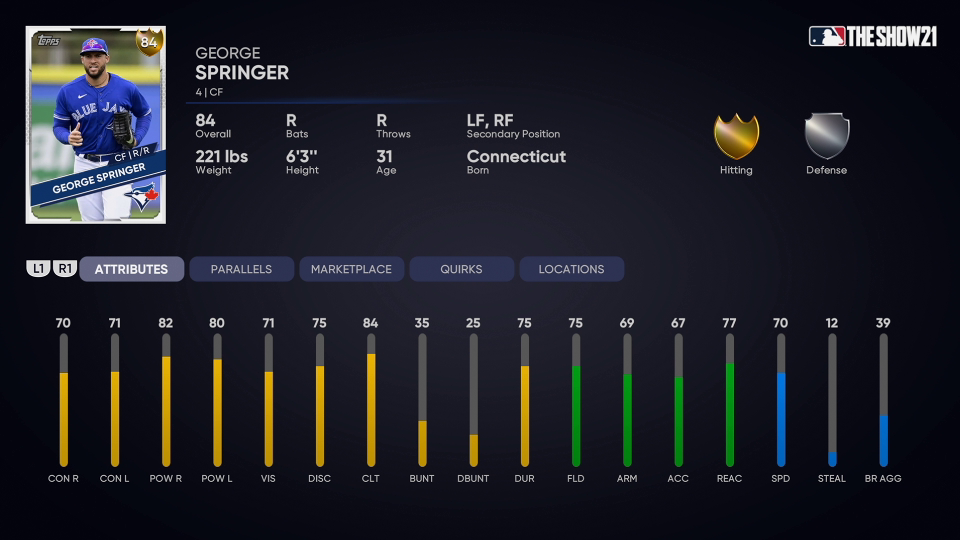 Even though the Blue Jays have not been able to get much use yet of offseason pickup George Springer on account of injury, his Live series card may be the best value at the position on the marketplace right now with his price hovering around 1,500 stubs. With contact attributes in the low 70s and power attributes in the low 80s, he doesn’t have the gaudiest numbers out there (hello, Mike Trout if you have 400,000+ stubs sitting around), but he’s a nicely balanced player who can do everything quite well without any glaring weaknesses. 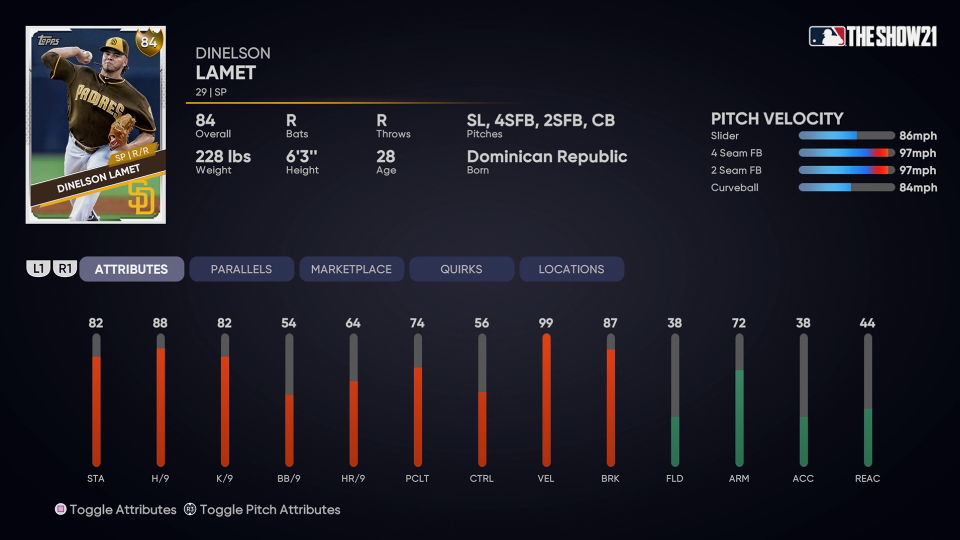 This is obviously a loaded position pool to choose from and there are some decent diamond starting pitchers like J.A. Happ and Joe Musgrove that you can get through completing Topps Now moments, but if you’re looking for a cheap option on the marketplace, Dinelson Lamet has a lot to offer for under 2,000 stubs. For one thing, his 99 velocity attribute is important because it means you will be able to keep a lot of hitters online honest thanks to that heat from his fastball. He’ll likely give up some home runs from time to time, but his pedestrian control and BB/9 attributes (56 and 54 respectively) probably won’t hurt you all that much if you’re able to execute well enough on the sticks. 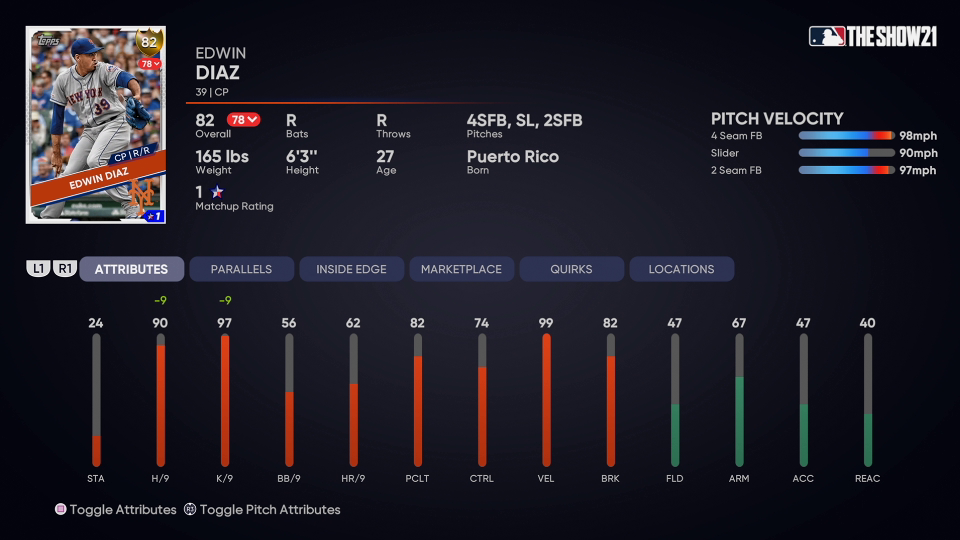 Similar to Lamet, the Live series Edwin Diaz card is an attractive option precisely because he’s the cheapest option out of the bullpen with a 99 velocity attribute in his back pocket. He’s currently going for somewhere around 1K stubs on the marketplace. As with Lamet, Diaz will give up his share of long balls and battle with control if you aren’t able to execute on the mound, but he’s certainly a lot cheaper than someone like Aroldis Chapman who throws just as hard and yet sells for about 40,000 more stubs on the market.

When it comes to MLB The Show 21 Diamond Dynasty budget beasts, some of it comes down to stances and windups. Still, we think this set of gold players can help you out in a pinch. Who makes your budget beasts list?