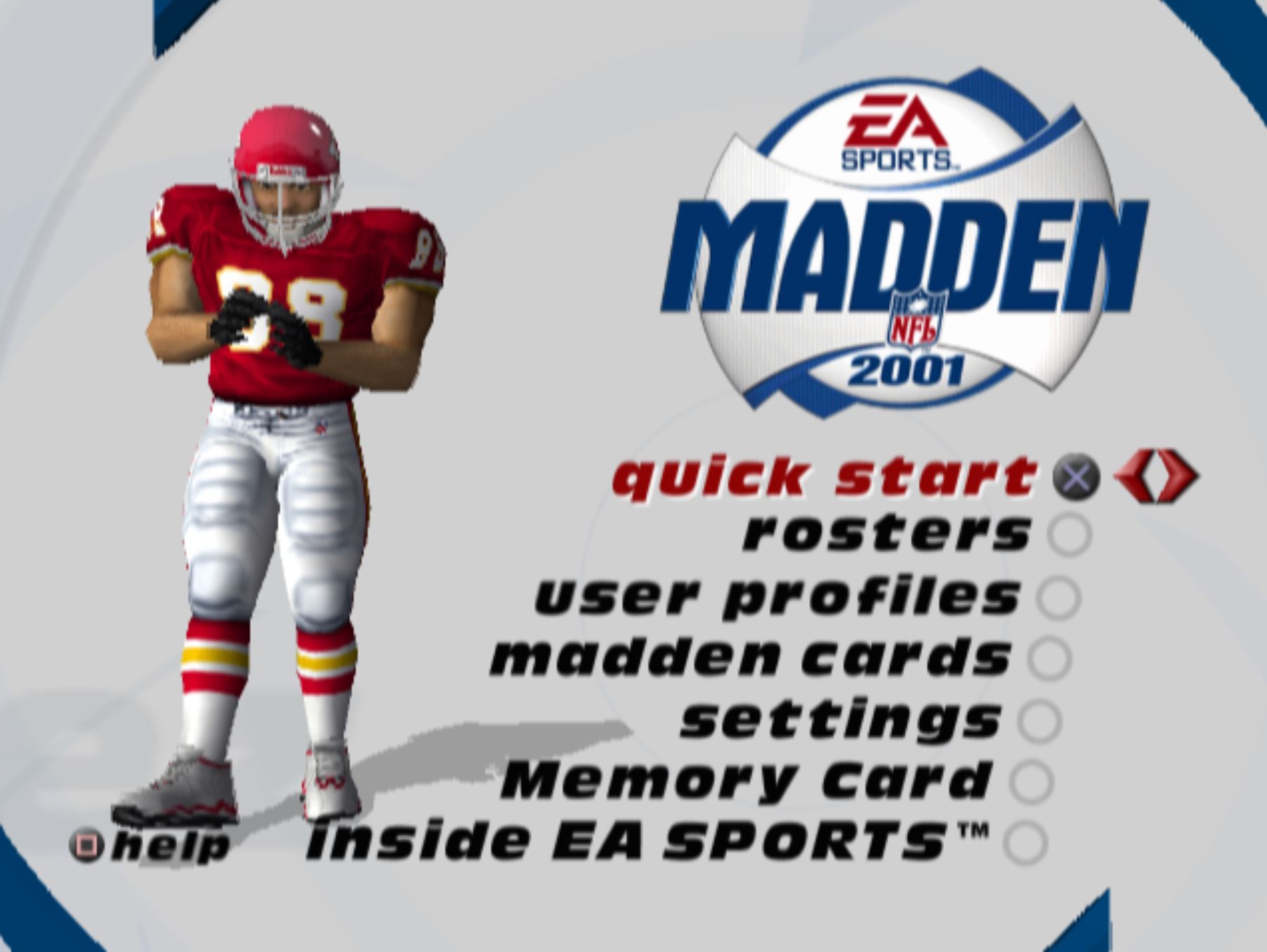 We have been doing our look ahead to next-gen sports games and what prior launches can tell us about them, but we also wanted to take this next-gen launch week to look back at some of the best sports games that kicked off a console generation. Matt took the lead here with a look at his top five launch sports games, and now I’m going to extol the virtues of five of my own this week. I want to start with a Madden NFL 2001 retrospective because I still consider this the biggest leap from one generation to the next in history.

Why I feel that way goes back to first remembering what Madden represented at the time of the PS2 launch.

The PS1/N64 era was not a bad era for Madden, but it was not the golden age for the series either. NFL GameDay was there giving it competition, and other series like NFL Quarterback Club were also eating into the market. When the Dreamcast launched and NFL 2K was the Madden replacement after EA decided not to develop for that console, this put even more pressure on that PS2 launch for the Madden series.

On top of that, the PS2 launch was rough. It is still considered one of the worst launches in history for games. There was just about nothing worth playing at launch, even if the console itself was nearly impossible to find because the hype was out of this world.

These peripheral factors are what make Madden 2001 on the PS2 even more impressive. For me, it carried the PS2 launch (along with SSX) and made me forget that I also owned Kessen at the time — let’s never speak of that again.

First and foremost, the graphical leap here was just insane. The polygons man, the sheer amount of polygons. The players looked real. Their eyes moved. They celebrated and smiled. There were coaches on the sidelines. It was a lot to take in, and even if you had played NFL 2K the year prior, this was still a big step up even from the Dreamcast in the graphics department.

That being said, Madden 2001 was more a sign of things to come for the franchise rather than the pinnacle of the series — Madden 2004/2005 would be the culmination of that promise — but it all started here with the initial wow factor.

In retrospect, is it sort of funny hearing Herman Moore say “I look good out here” while beating his chest? Yes. But it was amazing to see back in 2000 because we had never seen such high fidelity in our living rooms.

Beyond The Graphics, What Was Here?

In a lot of ways, Madden 2001 summed up launch games by being more about the graphics than the gameplay and depth. Madden 2001 had a franchise mode but did not yet have a create-a-team feature. Madden 2001 had a lot of gameplay upgrades, but we still didn’t have things like the Hit Stick quite yet. Plus, it was really hard to defend against the pass at times because “usering” was not as clean and streamlined as it would later become. 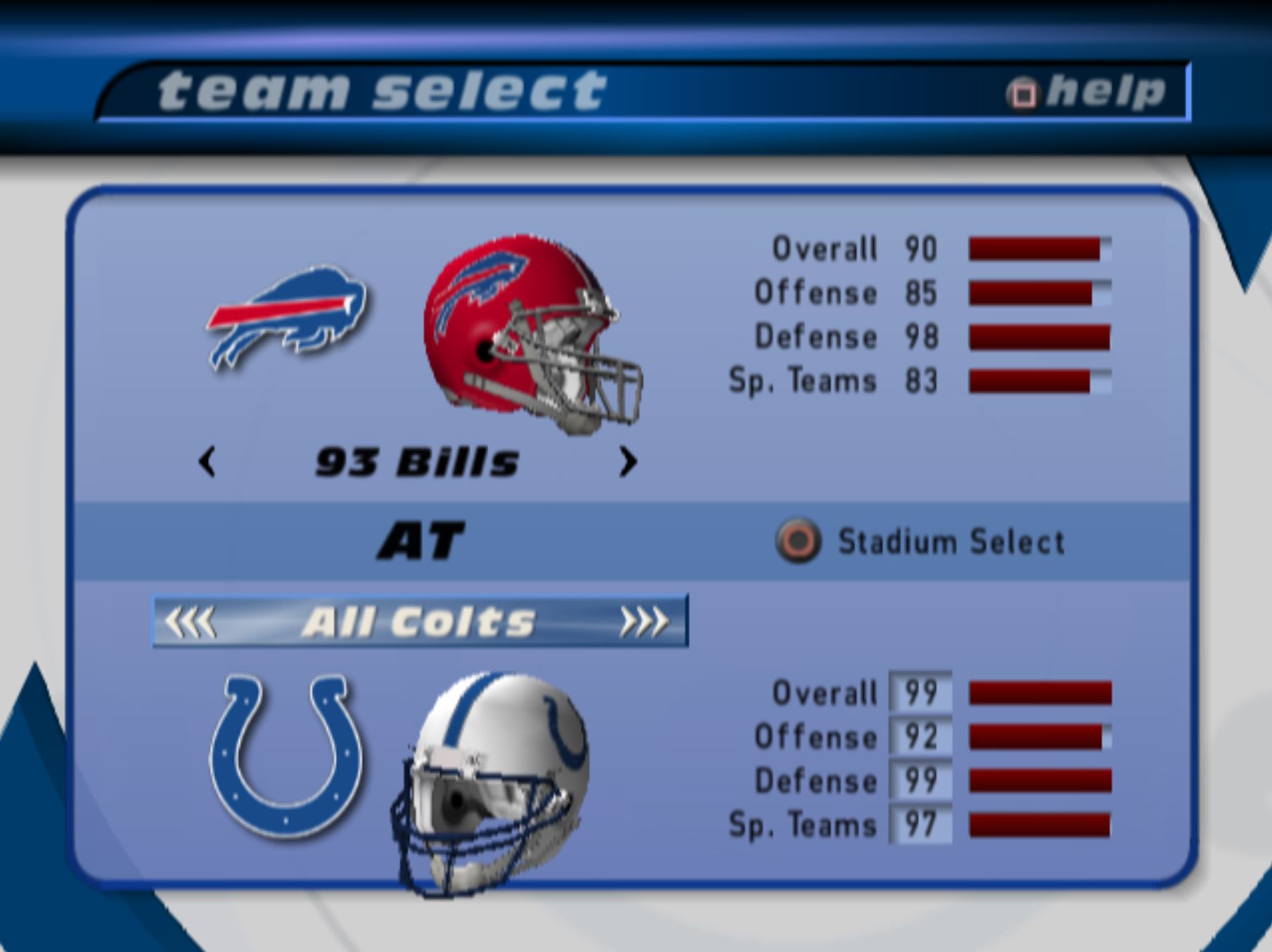 But there were a lot of classic teams to go through here, and even if franchise mode was not yet at the level of depth it would later reach, it was still a novel enough concept on its own to keep my attention for months on end — again, in part because there just was not much to play as of yet. I even remember one of my franchises involved trying to rehabilitate the career of Ryan Leaf. 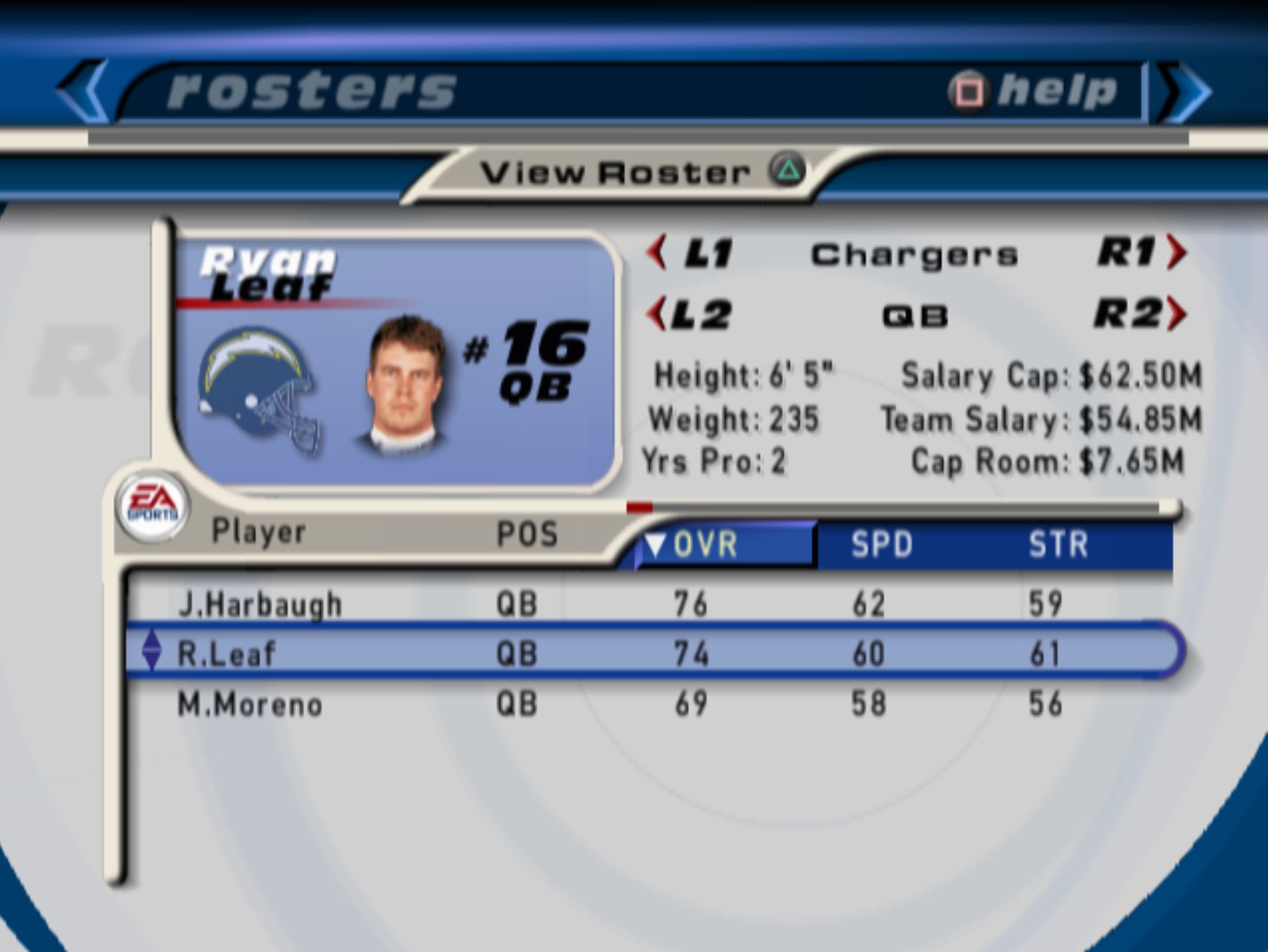 But my first love that season was still the Minnesota Vikings. Culpepper, Moss, Cris Carter and Robert Smith were right up there with the Bucs’ defense mixed together with Mike Alstott, and the Rams with Warner, Faulk, Holt and Bruce. Another unique thing from this era was the lack of 99 overalls. 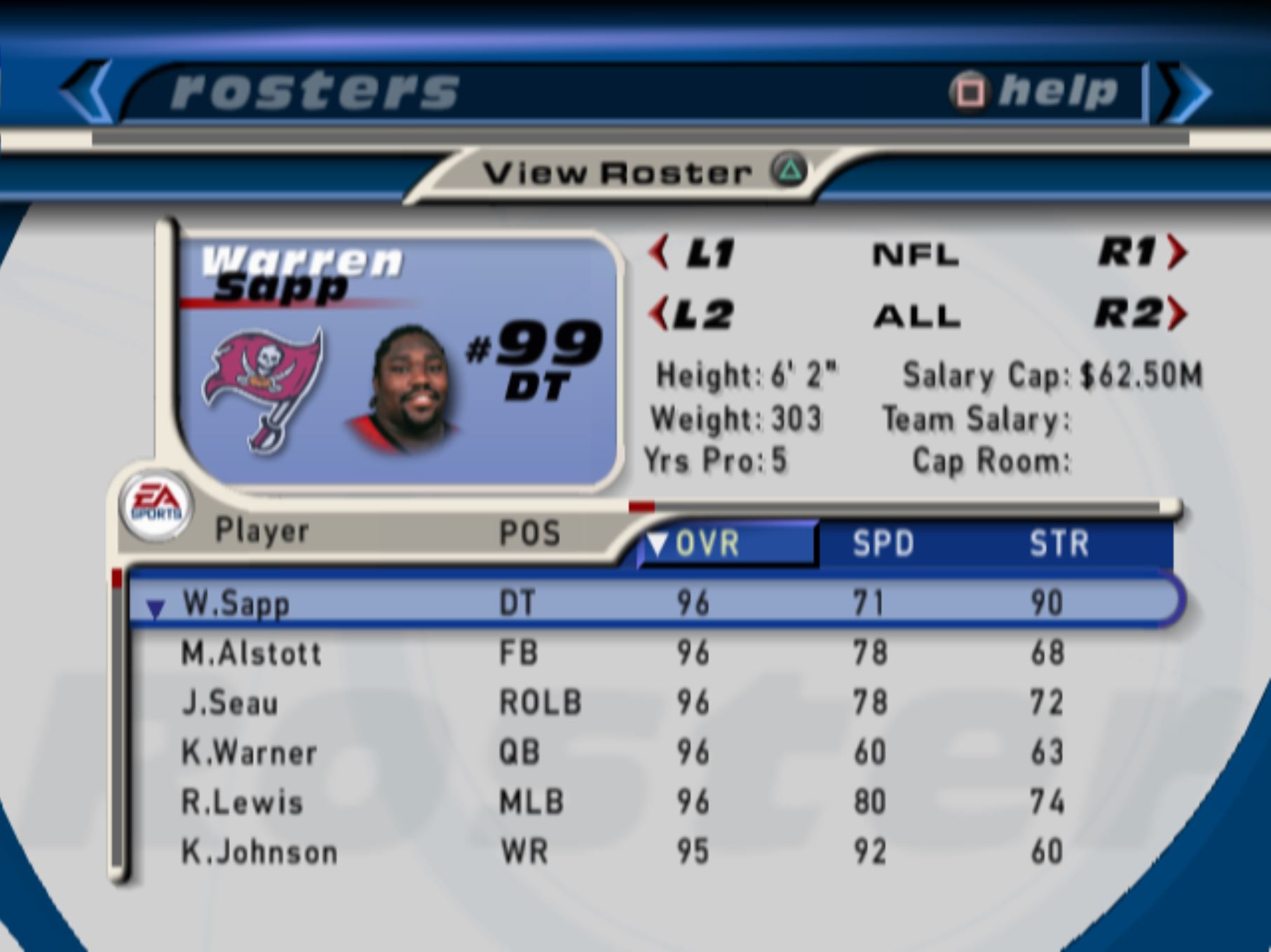 As most Madden games would tilt during the PS2 era, it was all about scoring and the Vikings were one of the evil teams to do damage with that year. The control you had on offense meant you were just about always at an advantage. The PS2 generation was the start of Madden trying to incorporate momentum, but just comparing it today, you could really cut on a dime in a way that’s not possible anymore now that more focus has been given to momentum and weight.

The other reason the game tilted so far in the offense’s direction — beyond the aforementioned “usering” — was that there was not much for you to do as a defensive lineman yet to break free of engagements. There were certain blitz packages that were very effective, but the depth of controls here was more impressive when you had the ball in your hand.

Plus, this year was all about wowing people, so there were a lot of one-handed grabs and other ways to juke opponents as a ball carrier. Meanwhile on defense you could basically just try and strip someone or dive at them and pray for the best.

The other major negatives I remember at the time included the commentary and the lack of animations in the tackling department. Madden and Summerall are part of the broadcasting lexicon, but 2K was already well ahead of the game here and made this duo stick out as being far too generic even for the times. When it came to tackling, while the animations that did exist looked amazing, there were not many of them, and you would get into a lot of instances where players just sort of rammed into each other without any sort of tackling animation taking place.

But even when the commentary would wear thin or the lack of tackling animations started to become noticeable, the sheer beauty of the game for the time would always bring me back.

And that’s what next-gen games are about in a lot of ways for people. They’re a showcase for what the console will be capable of here and now, and Madden 2001 on the PS2 was certainly just that. While I played NFL 2K1 more than Madden 2001, I still have more memories of Madden that year because I remember how excited I was when I got Madden with my PS2 that Christmas.