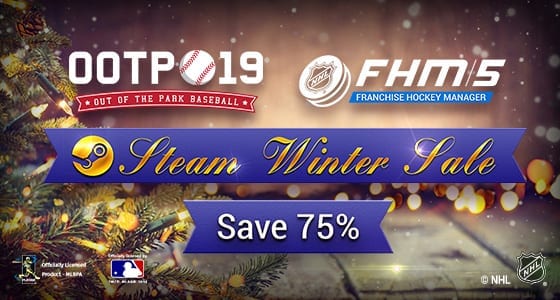 If you haven’t picked up the games yet, now might be the best time to purchase them, since you can grab them at a 75% discount.

Out of the Park Baseball 19 Basic Features

The brand new 2018 MLB roster set will include all projected Opening Day MLB rosters as well as the complete minor league system down to the rookie leagues and even future draft classes. On top of this, 8 international leagues (Japan, South Korea, Taiwan, Australia, Italy, The Netherlands, Mexico and Cuba) and several international and US independent leagues return to OOTP 19 with accurate and projected 2018 rosters.

Discover new talent, draft the next superstar, negotiate with free agents, enter trade talks with other teams, build your dynasty and guide a franchise into an infinite future! As a manager, dive into the more hands-on management and set your team’s lineups, pitching staffs, in-game strategy and call the shots from the dugout. You can oversee your league at a high level, or play out each game in the redesigned 3D game mode, managing play by play or even pitch by pitch. OOTP has it all covered!

New features in OOTP 19 include:

Franchise Hockey Manager 5 is the only sports strategy game licensed by the NHL ® , including the real clubs, awards, and trophies associated with the greatest hockey league in the world. FHM 5 allows you to build your hockey franchise into a perennial Stanley Cup winner YOUR way, in the current 2018-19 season or back through the entire history of the sport – all the way back to the very beginning! DIfferent eras demand different tactics, and it’s up to you to put together the best club possible for every era.