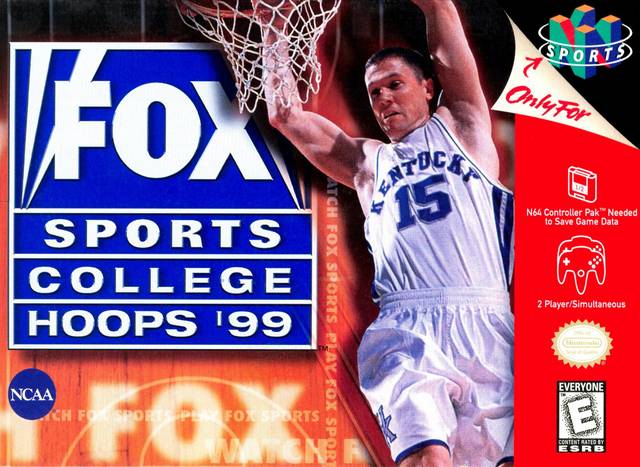 We talk so often about how exclusivity is a bummer because it limits competition and hurts the consumer. These are fair reasons to dislike the lack of competition in the sports game space, but Fox Sports College Hoops ’99 is my poster child for a game that shows off one reason why I also miss the competition. We don’t get nearly as many truly bad sports games anymore.

Courtesy of N64 Glenn Plant, he explains why Fox Sports College Hoops ’99 was a mess. The frame rate is garbage, the AI is crap, it went through development purgatory, and it had weird licensing issues. In short, Fox Sports College Hoops ’99 has everything I could ever want in a bad game. It has a troubled development history with what’s likely an amazing postmortem behind it, and the game itself is a distillery of wretchedness.

When folks talk about whatever sports game being “bad” these days, usually it’s sincere but also hyperbolic. The idea of a “bad” sports game has taken on new meaning in most instances. When something is bad, it just has bugs, or isn’t simulation enough, or it’s too derivative and so on. Regardless, the game is generally functional and you can usually find a reason to at least try to like it. But with stuff like College Hoops ’99 there’s just no redeeming value, and that’s fantastic. It’s a Superman 64 in sports video game form.

By removing competition from the marketplace, in a way it’s just made sports games safer. Most of the big titles are big investments, so there’s an incentive not to screw up, but there’s also not much incentive to risk anything either. When the barrier to entry was lower for licensed games, it meant we got cacophonous disasters like this game or WCW Backstage Assault on a yearly basis. And, look, it’s not like there aren’t still bad sports games that come out, it’s just you can gather them up for one generation much more easily now.

I think there’s a reason we can look back on things like NBA Elite 11 with some fondness now, and it’s because they just feel more rare and unique. They’re maligned and panned at the time, but things like Tony Hawk Ride or Elite 11 help the ecosystem. They show how horrible things can get, but they can also be used to highlight the highs of Skate 2 or NBA 2K11.

One last component that plays into all this is money. There’s money to acquiring exclusivity, but something that vanished due to that exclusivity was the “money grab” play. When licenses weren’t so cost-prohibitive, you had more companies going the “cash grab” route and rushing out bad sports titles with a license attached to it. Now, I can understand why sports leagues don’t want drivel tied to their brand, but it’s that last element that caused “bad” sports games to mostly die out. The people making sports games today tend to love the sports involved, and so most of the “indie” games that don’t have licenses are competent as well.

When you put it all together, the dearth of bad sports games today makes sense, but it doesn’t mean I don’t miss them.