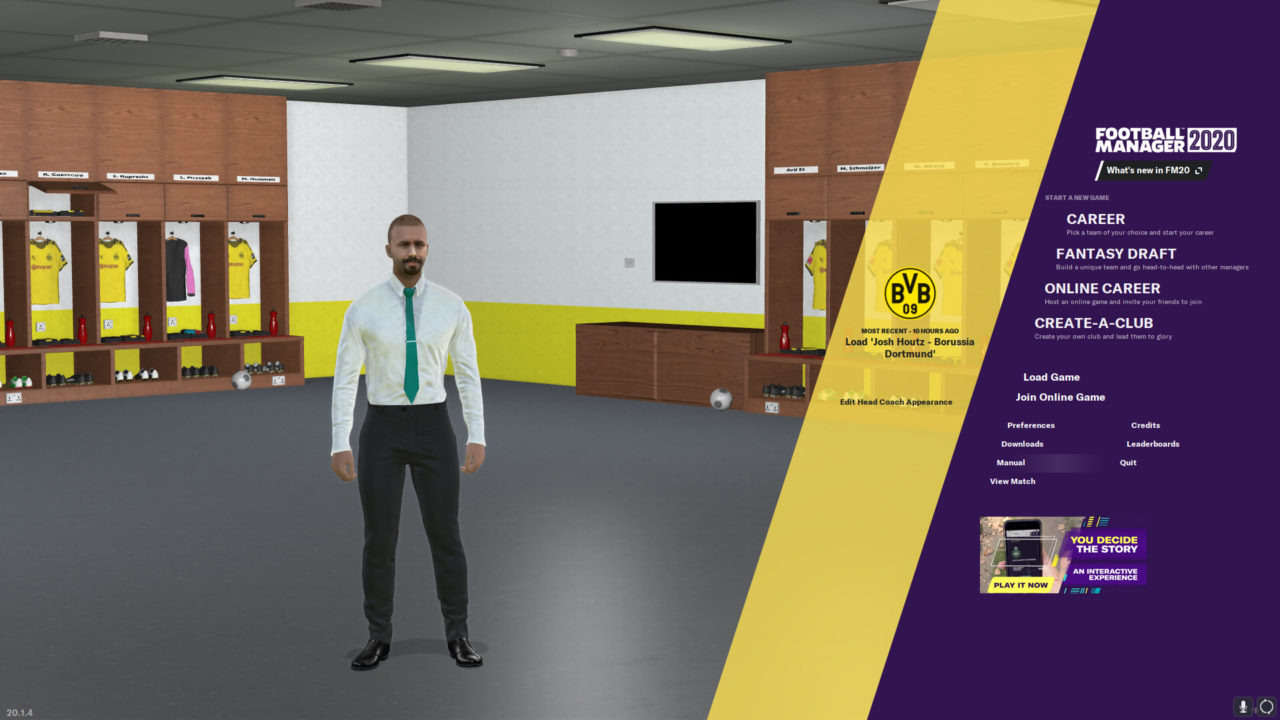 Today, very few video games are worthy of a purchase based on their successful history. A perfect example of this is NBA 2K, which at one point was at the top of the sports-gaming totem pole. However, things have changed substantially over the last several years and the same holds true for Madden, FIFA, MLB The Show and many other sports game.

Truth is, with success comes unreal expectations. And once a game has reached the pinnacle of its success, it’s hard to ever match it. Fortunately, for Sports Interactive’s text-based soccer simulation, this is not the case.

For years, Football Manager has been one of the most realistic representations of the world’s favorite game. And whether you prefer to scout youth in hopes of building a long-term winner, or jump at the opportunity to bring a championship home to your favorite team, everything is on the table in Football Manager 2020. In fact, Football Manager has such a good reputation that I pushed hard to review this game because I wanted to experience this text-sim for the first time.

Well, I got my chance, so here is my review of Sports Interactive’s latest installment, Football Manager 2020. 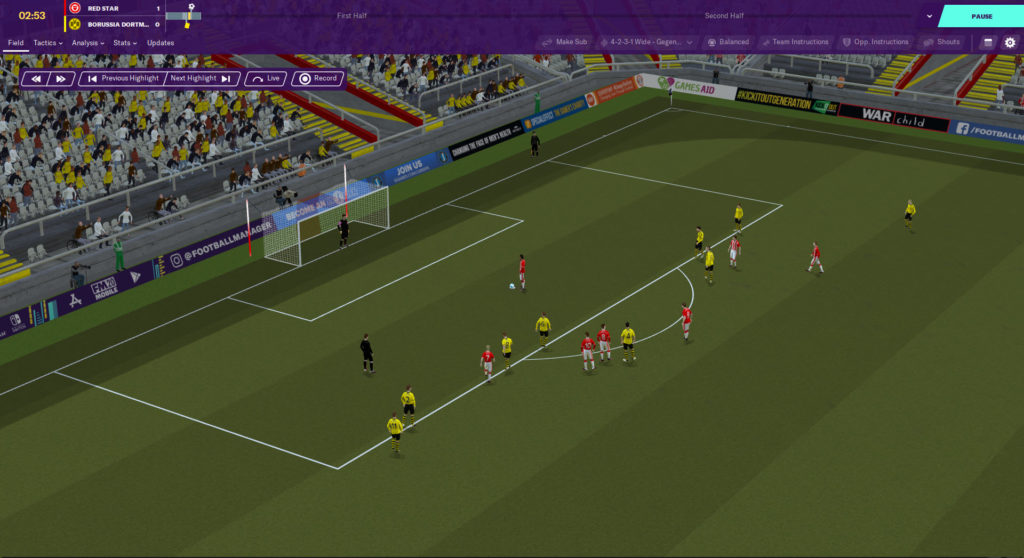 The core of any video game comes down to the overall gameplay. If a game isn’t fun or competitive, there’s really no reason to continue to play. Obviously, with a game like Football Manager, there’s plenty to love about the overall experience because you would be hard pressed to find a more compelling representation of the sport of soccer. From preparing your team for the next matchup to pre and postgame interviews, there’s so much for the consumer to do. I’ve logged many hours playing FM and very rarely have things felt repetitive or bogged down. Sure, there’s a lot going on (as I will touch on later), but overall you won’t find a better experience.

This installment, the matchday experience is completely overhauled and offers up improved AI. Now, again, as a noob I don’t have a ton to compare this to, but the AI was aggressive on offense and no slouch on defense. Goalkeepers take good angles on shots on the whole, and they did not seem overly easily to exploit. It’s not perfect, but it was a good first experience for me and doesn’t turn me off from the franchise.

Sports Interactive stated they had done a good amount of work improving graphics, which I find noticeable. The pitch deteriorates during rain and the overall presentation on matchday is done quite well. Player models stand out from one player to the next. For example, when playing as Dortmund, I was able to point out Marco Reus regardless of where he was on the pitch.

In addition, I scanned my face into the game, and unlike some other sports games, it was an accurate representation. For a text-based sports game, the graphics are very well done and one of the strong points overall.

From the moment you’re introduced as the manager of your new club to the very last day on the job, the experience here is unlike anything I’ve ever felt in a text-based simulation. One new addition to FM 2020 is a “club vision” that now allows you to interact more on a day-to-day basis with the board. This new feature gives you a better oversight of what objectives you and your team must meet throughout the year. This new vision is now outlined in the new “welcome meeting” window. You will be prompted to check in here before rummaging through your inbox. In the board room, which scales up and down depending on your facilities and playing level, you will find team expectations, staff and how the first-team squad is performing.

The backroom staff has some added positions, including a loan manager and technical director. This will help you decide on which players you would like to target during the transfer window, and give you additional tips on how to address the staff. Additionally, you will receive more advice from the backroom staff on match analysis and tactical feedback.

It is no secret that in all sports, the way to build a successful team and franchise is through developing talent. Fortunately, this is something that FM 2020 takes very seriously and has done a great job of adding additional features in the process. New to this year’s game is the development center, which allows you watch the young talent evolve. Here, you will see relevant advice on your different squads and how those young prospects are performing. Obviously, how much time and resources you put into your youth squads can directly impact your prospect’s development.

Truth is, nothing is more rewarding than watching your young prospects work their way up to becoming the leading scorer in all of Germany. Then again, that’s probably how it felt to watch Christian Pulisic go from a young, developmental prospect from Hershey, to one of the most sought-after prospects in all of soccer. If you want to have long-term success in FM 2020, lots of time will be spent in the developmental center.

Menus Can Be Overwhelming

As someone who is relatively new to the series, I nearly fainted when I booted up the career mode. Truth is, it was not easy to navigate from one window to another. I’ve enjoyed FIFA and PES over the years, and although I realize those aren’t text-based, I never expected this. Truth is, just starting a career mode can be a lot for someone with little experience. Menus are littered with several different options and many tasks must be completed before consumers can continue.

Heck, I spent several minutes trying to figure things out. And this doesn’t include the laundry list of tasks that are asked of you before and after each match. But in the end, the experience wouldn’t be the same without these minute details. Plus, once I got the hang of things, it made the game far more enjoyable, so I was happy I went down that rabbit hole.

In today’s society, it is hard to overlook equality in any sport. And as we’ve seen with several other high-profile games, the ability to play as both male and female superstars has become the new standard. Unfortunately, this has not been introduced in this year’s installment of Football Manager. Now, I’m not saying all of women’s soccer should be represented here quite yet, because frankly women’s professional soccer is a bit all over the place and is not as structured yet as men’s international soccer. It might be hard to flesh it out and make it as compelling when it’s really just starting to grow as a whole — when looking beyond the hugely successful World Cup at least. Regardless, while FM 20 does give you the option to create female managers, the inability to add women players and teams seems like a big miss by Sports Interactive.

In the end, I think you will struggle to find a better representation of the sport of soccer. As I mentioned previously, I was new to the series and spent most of my time playing FIFA or PES before this. I never imagined a soccer game to be this in-depth. And although I had several gripes with the overwhelming options here if you approach this in a more casual manner, the amount of detail put into this game is something to respect.

Yes, matchday graphics could be further revamped to better suit those of us who enjoy visuals in FIFA and PES. I also assume this year’s game won’t be as jaw dropping to the die-hard FM fans who show up every year. However, when I get down to the nuts and bolts of things, Football Manager 2020 is just about everything I could ask for as a fan of soccer. To put it another way, if Jurgen Klopp was a video game, he would be FM 2020.