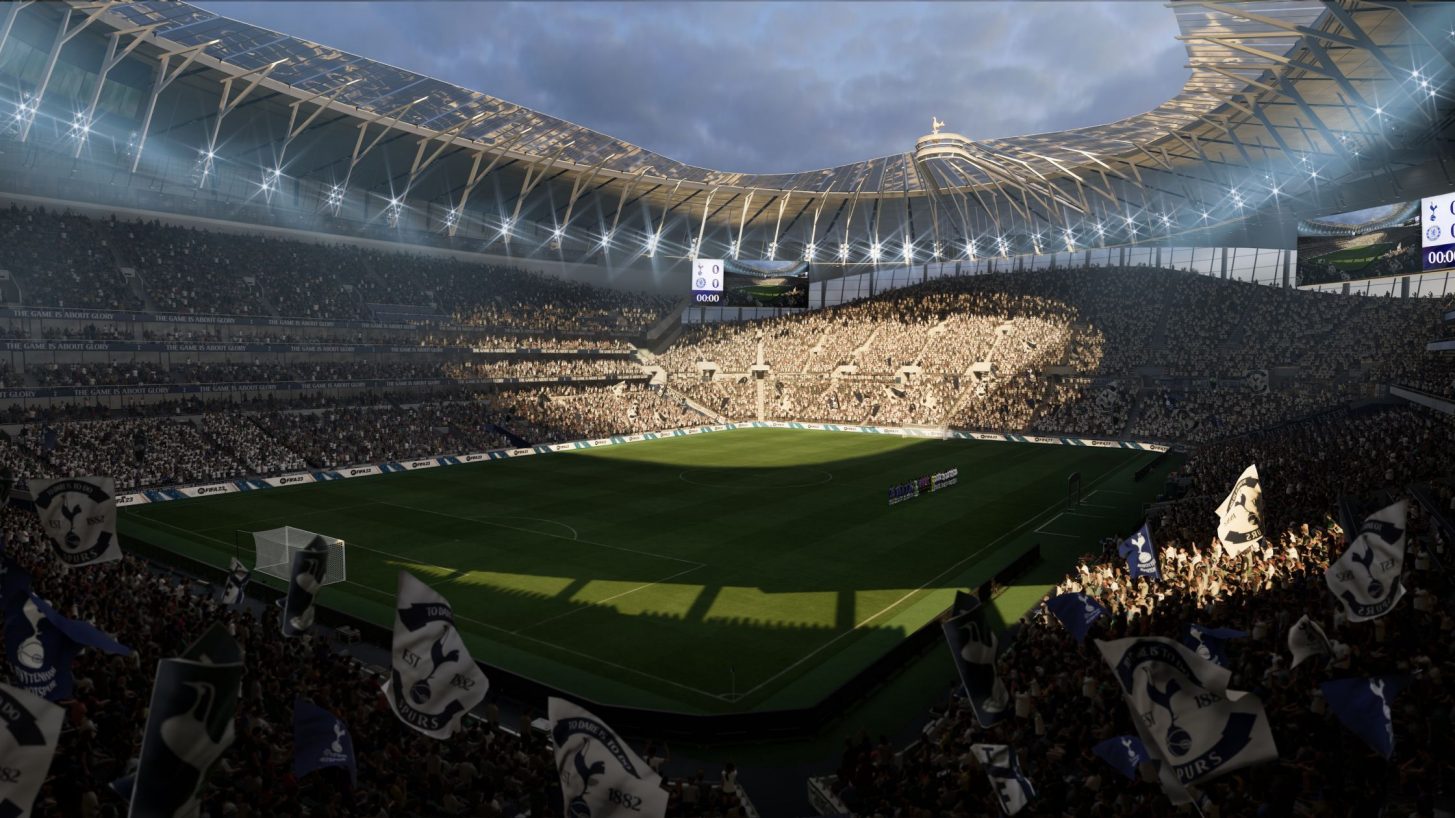 After disappointing gameplay and career mode reveals, EA is back again with another deep dive and trailer, this time focusing on the Matchday Experience and all that it entails in FIFA 23. After originally enhancing the visuals and matchday events in FIFA 21 on new-gen consoles, EA appears to have taken another step forward replicating the presentation of watching a game on TV or attending it in-person.

Credit due to EA here, the new pre-match lead up to the game looks good. The running theme throughout this entire deep dive video was very nice looking visuals. I’ll get more into the graphics later, but the new cutscene EA added for supporters walking through the streets — just hopefully not those Saint Denis streets. Although I’m unable to determine how repetitive the lines from Derek Rae are, his Tottenham vs. Chelsea intro sounds similar to what he does while covering the German Bundesliga for us stateside folks.

A nice drone flyover of Stamford Bridge coupled with better crowd visuals could actually prevent most players from skipping through these. One area I would like to see added, if possible, is some sort of mashup video featuring highlights for derbies. Contentious moments, crowd pans, and highlights would help to get the juices flowing but there could be legal issues preventing something like this.

Fitting with the theme of more inclusion and equality in football, female officials make their way into the game this year. Being able to assign them manually while also having them available in two of their most popular modes, FUT and Pro Clubs, is a good way for EA to accentuate the already added Women’s National Teams as well as their club counterparts.

One of the first settings I turned off last year was the trainer. The visual distractions it produces are actually counterintuitive in the sense that it takes your attention and focus away from what’s happening around you to focus on indicators and other text/shape-based graphics. FIFA is a game of fine margins and split-second decisions. In other words, there are difficulty levels for helping to ease the learning curve for players new to the franchise.

The new direction EA is taking when it comes to these new cameras for FIFA 23 is a welcome one. I’ve criticized FIFA in the past for its more cartoonish approach to visuals, especially player model textures, but the new camera closeups during play stoppages look really good — as do the crowds when they are also in focus. Even the animations look more human-like in terms of both visuals and capturing the emotion of the event. FIFA 23 is by far the best looking FIFA to date, and it finally seems to be a game worthy of more powerful hardware.

EA’s marketing team worked overtime for this one. All jokes aside, I love these sort of graphics when I’m watching a match. ESPN (Bundesliga) and La Liga (BeIN Sports) do a fantastic job at displaying statistical overlays in a way that doesn’t interfere with the match. These look to only be available during replays, but as someone who enjoys replays (and not just for nitpicking purposes), I’m really excited about the inclusion of any data metrics, even if they are not 100 percent accurate.

Here’s a rare chance for the Premier League broadcast packages (NBCSN, Sky, etc.) to step their respective games up and borrow a bit from EA for a change.

Even going back to the first official reveal trailer, the grass was oddly the first thing I noticed. It looks wonderful to say the least. Good looking grass is always a combination of textures, lighting, and coloration and EA scored a hat trick on this front. To say that this is the best looking FIFA to date isn’t just about player visuals, it’s about the crowd visuals, turfs, and more. Even the grass markings, which have been done in other games, look good — albeit a bit exaggerated — and it speaks to the work FIFA’s art team has done this year.

I’m always a bit cautious when it comes to shadows. On one hand, it’s a bonus when they are dynamic and change with the time/weather. On the other hand, they can be really distracting and make it hard to play in certain stadiums. Overall, they look good but the true test will come after the game is released.

Nets, again just look good. The PES community waxed poetically about nets for years (perhaps too much), but they do help to accentuate a good goal when the sound is crisp and the net physics play out accordingly.

Apart from Pulisic hitting the griddy, this is the weakest part of this deep dive trailer. It’s not so much the celebrations, but the post-goal sounds are just unnecessary. Horse sounds? And to think the EA team and influencer (who once again sounds like she’s in a different room when recording her lines) are actually excited over this feature? Perhaps I’m showing my age here, but just give me the post-goal stadium/team-specific goal songs and the boisterous applause from the crowd over artificial sound effects.

I’ve always been a fan of FIFA’s soundtrack, so the ability to listen to it during a match is a nice bonus if you want to drown out what’s usually repetitive commentary.

To date, this has been by far the most impressive deep dive trailer we’ve seen. Perhaps this is because the gameplay wasn’t at the forefront, although there were a few goal tidbits thrown in that we had seen before. Either way, for the first time since FIFA made the jump to next gen, we’re seeing the technical power at work. Improvements all around to areas such as grass, lighting, and crowds showcase an improved level of detail and attention to more photorealism. While gameplay will always be first and foremost when it comes to how I judge FIFA, it at least looks pretty.

Discussion
Click here to reply to the discussion
Continue Reading
You may also like...
Related Topics:ea sports, fifa, FIFA 23, soccer