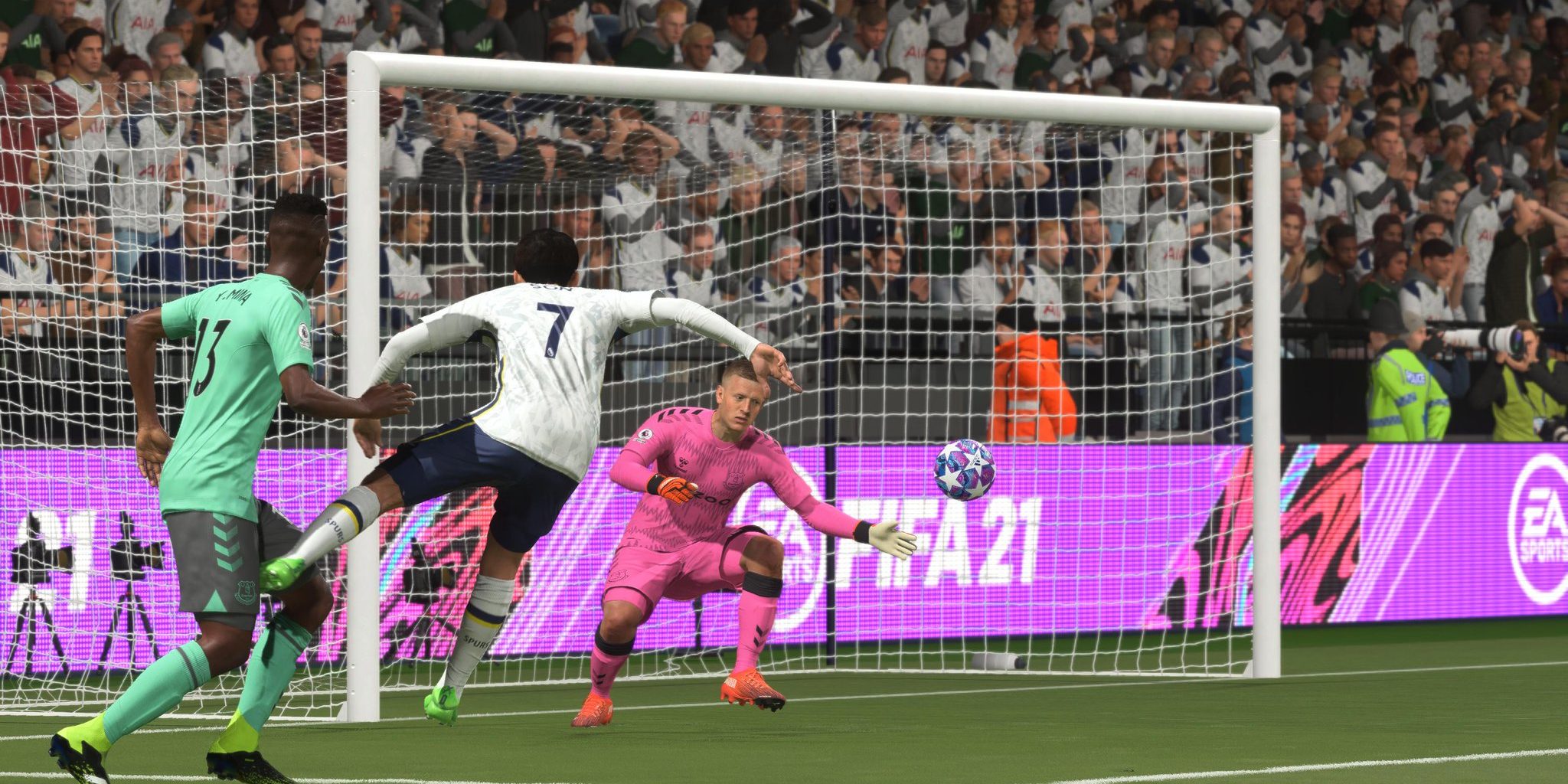 I always try to highlight Matt10 and the community’s work at interim points, and it’s long past time to highlight the final OS Community slider set for FIFA 21 for the year. The issues with FIFA 21 have been well covered at this point — at least as it relates to the AI — in my prior explanation of these sliders, so I won’t go into the same depth here. But, in short, the CPU does not cross the ball enough (or at all at times), and the central midfielders do not track back enough.

These two issues have plagued Matt10 and crew all year, and sadly there is no perfect fix. This is either a design decision, or it’s that FIFA has been so tuned for head-to-head play that the AI has just sort of been left behind because so much of what you have to do in FIFA now is user everyone and micro-manage. Maybe different gameplay styles would help in the future, or maybe the developers need to think about tuning the AI more aggressively in patches during the season. Whatever the case may be, the issue has been explained and shown off so many times, it’s something that the development team is just ignoring until next year, or does not know how to fix with a patch without busting something else. 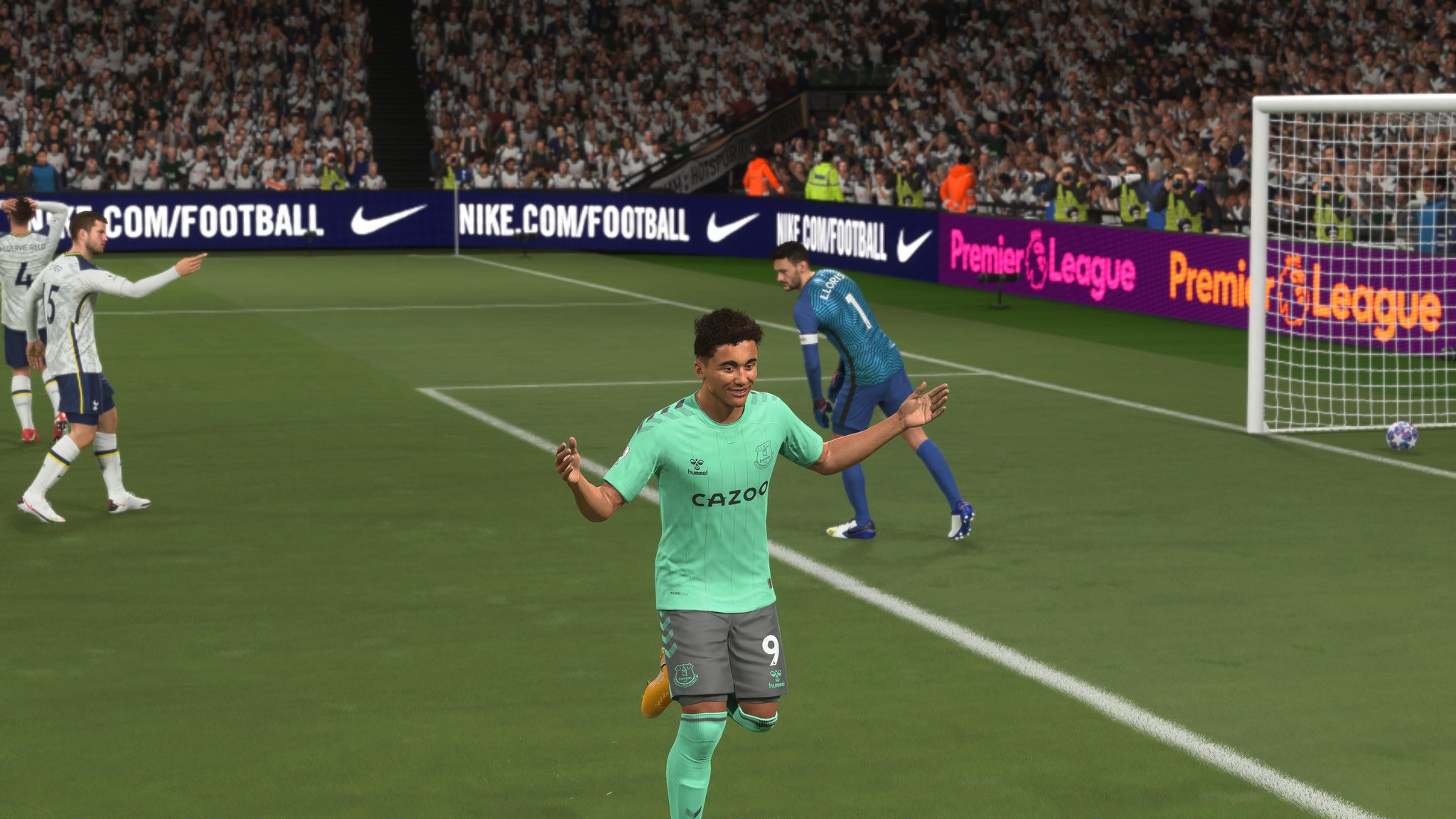 Still, if you want to keep playing FIFA 21 — because it does have its moments, especially on next gen — then these sliders are the way to go. With that in mind, I will highlight them below, and then you can head to the forum thread to get any further details you need — or simply give a thanks to the hard-working peeps who help make these sliders possible year after year.

First, an explanation of some things from Matt10 himself:

♦♦♦ Goal: On Legendary, no matter what slider values you change, the CPU has a bit of left over competitor mode in them – which prevents them from doing the obvious like crossing the ball or shooting in obvious positions. The acceleration discrepancy on this set, and all sets, will allow for a much more competitive game against the CPU overall.♦♦♦

If the value is the same for all difficulties, it will be listed once. Please refer to posted image of slider set as well.

Sprint – 20/20
► Lower Sprint in FIFA always brings momentum and some form of foot planting. Since we’re playing on Normal speed, it means even more of an emphasis needs to be made in getting that feel right.

Acceleration – 48/50 | 48/50 | 48/50 | 48/51 | 48/50
► The discrepancy here is vital to ensuring the CPU is competitive against you. Because of the midfield issue, it’s easy to reach the CPU’s defensive line with a couple 1-2’s and through balls. With this slight discrepancy, it keeps the CPU midfielders in the challenge just a bit more, but even important there is the defenders can be in position to challenge the ball carrier sooner – so it requires just that much more precision from the attacking side. *If there is anything negative here, is the sacrifice in stamina consumption for the user’s players as the lower acceleration means less stamina drain*.

Pass Error – 55/55 | 60/65 | 55/60 | 55/52 | 52/52
► The key with pass error is that we have to find the value that makes it where the CPU isn’t going to constantly try the same types of passes to break the defensive line. The most common method on default is to try to thread a through ball in, and let the forward be 1v1 with the keeper. With this value just slightly raised, we get that variety we are looking for, and paired with the lower pass speed, it gives defenders more of a chance to intercept/deflect. We lowered the pass error for World Class/Pro to keep the CPU a bit more of a threat compared to above 60 values.

Shot Speed – 49/49
► A favorite choice here to lower shot speed, but with the acceleration value at 48, the keeper will also be just slightly delayed, giving that late reaction for some brilliant saves or clutching at thin air look. Makes for some fantastic interactions with the ball.

Injury Frequency – 75/75
► Thanks to Red for figuring these out and keeping good documentation, we’ve found that these are probably the most balanced of walk-offs, temporary and significant injuries.

Injury Severity – 25/25
► Thanks to Red for figuring these out and keeping good documentation, we’ve found that these are probably the most balanced of walk-offs, temporary and significant injuries.

GK Ability – 42/42
► This is a significant change, but anything above 45 and the keeper seems to cover so much ground. In addition, the higher the GK value, the more “soft” deflections that set up more chances. With the lower value, there’s a bit more delay in reactions, which results in the coveted slight deflections that go out for corners.

Marking – 65/65 | 65/65 | 65/65 | 65/65 | 55/55
► With the massive amount of testing, we started to build the HLW as a priority, and from there it was a matter of finding the best marking to make up for space. We had it at 70 for quite a while, but recent testing allowed the value to be lowered, especially as run frequency and FB positioning have been increased slightly.

Run Frequency – 5/5 | 5/5 | 5/5 | 5/5 | 10/10
► Relative to the other values, we wanted to really focus on ensuring that we’re not seeing a tennis match of sorts – at least not in every game. Custom team tactics matter the most, but with sliders it’s about addressing the position of the midfield and how runs off the ball affect that.

● The Height, Length, Width (often referred as “HLW”) are quite important to consider for each slider set. [/color]

Height – 52/52
► We had this at 50 for a long time, but found out that it was preventing some of the variety from the CPU’s build-up and attack. Of course, team tactics dominate the most, but the most notable gameplay finding here is how the CPU crosses (as mentioned, World Class is not as flawed as Legendary or Ultimate) relative to the position of the oncoming runners into the box.

Length – 5/5
► By far this is the most important value of the entire set. As I mentioned above, a big thanks to OS testers, and in particular QB for his relentless efforts in ensuring we don’t settle. We found slightly higher values than 5 (max of 20) started to look really good shape-wise. The importance of playing at 5 length though really compresses the field of play, naturally, but it is not to the point there is no decompression. It’s surprising really because we have notoriously used higher values over the years. However, the midfielders not tracking back is such a big time issue – that we’re basically forcing them to get in a somewhat correct position – even if it’s not perfect or fundamentally sound. *Note, as the user you still need to manually control your midfielders and practice good technique. This is not a 100% automated process. The FUT/PRO crowd made sure their misguided “AI defending” theories were the norm.*

Width – 48/48
► The width was moved all over the place to be honest. We’ve tried to get into positions in which the players can be isolated to FIFA’s 1v1 logic, but that ended up hurting the midfield to become non-existent and easily bypassed. As a result, the width had to be lowered so there was more play in the wider parts of the pitch, versus just central passes (or chips) as a means of attack. In a two-man central midfield, they will look “stacked” initially, but will eventually spread out as the ball moves into deeper positions on the pitch. This will be the same with the fullbacks – and let me say do not get carried away with the FB positioning as that will always be narrow (whether 0 or 100 values of width) because they are set up to be very narrow from the start and in transition.

FB Pos – 5/5
► We want to reduce any other types of runs off the ball. Of course, in typical FIFA fashion, lower FB doesn’t remove overlapping fullbacks or even negate them from getting upfield.

Here is the final version of the FIFA 21 OS community sliders. As always, please give feedback regarding this set exactly: 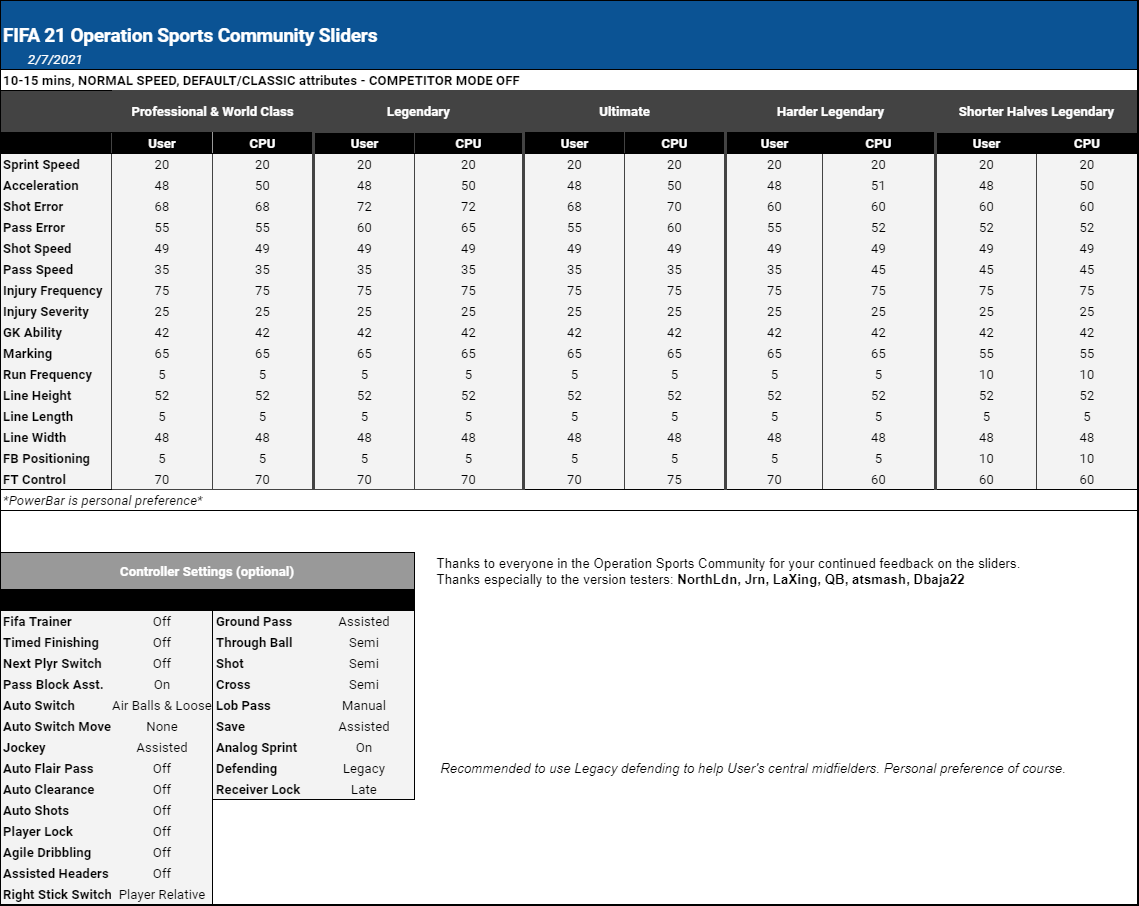 Again, if you need even more information, head to the first post in the thread. Everyone is generally helpful as long as you’re respectful in kind.

Top Five FIFA 21 Next-Gen Stadiums
What Sort of FIFA 21 Manager Are You?