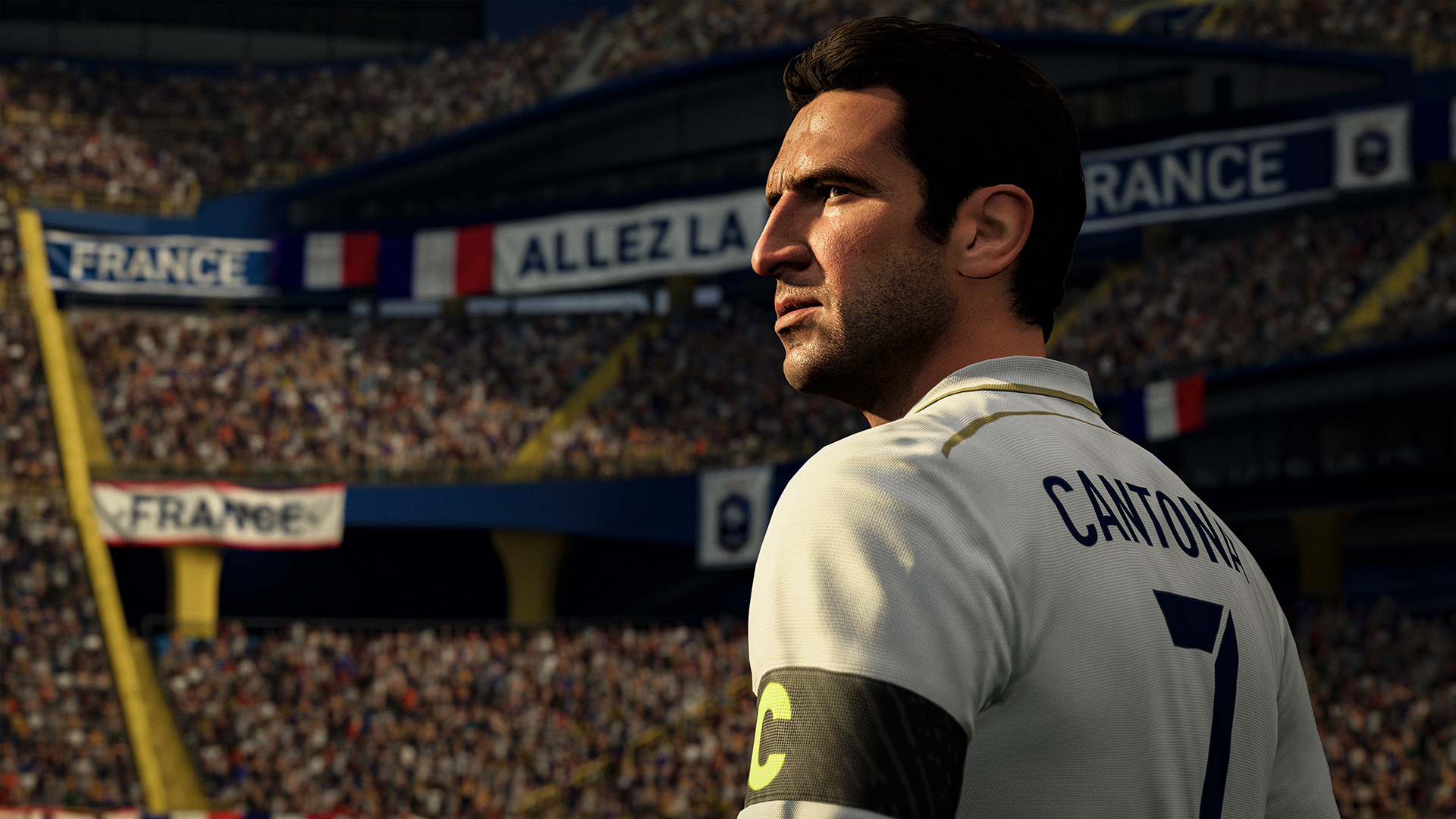 As KG said in his review a couple weeks back, FIFA 21 is in a little bit of a weird spot. Beyond the potential next-gen delay, the gameplay is not amazing this year out of the box — at least not for fans of “realistic” soccer. The modes got a lot of love and the presentation has taken another step forward, but it can be hard to find a good game against the AI. This is where the FIFA 21 sliders from Matt10 and the OS community come into play.

The general issues with the FIFA 21 gameplay in part stem from a design decision that’s been ongoing for a couple years. The FIFA developers want to make you defend rather than let the AI do it for you — especially in online games — so it can be a passive environment through the midfield unless you’re very hands-on (as you can see in the example below).

This is a direct response to the double team spam and high-pressure AI defense that we were seeing in online games a couple years back. A lot of head-to-head fanatics felt it was a low-skill tactic and so now it’s been replaced by more “park the bus” and deep-line defense sort of stuff in competitive online games. (It’s also something we see in the EA NHL games where defenders will be more passive unless you “click on” and take over.) Neither iteration of FIFA (overly aggressive/overly passive) is very fun to play against, so the FIFA developers still have some work to do here in order to create a balanced and fun game through the midfield.

However, we have sliders to at least try and improve the AI experience, and that’s where Matt10 comes into play.

Goal: The focus here is still to get midfielders to latch onto their man, but it’s not going to be perfect. The introduction of lowering run frequency to 30, for this set, has been remarkable, and the other values complement the change.

Version 1, Beta 2 of our @OperationSports #Fifa21 Sliders are posted. We've included modifiers for Leg-Wc-Ultimate difficulties as well. Description of each value can be found here: https://t.co/lnEaDoNqIk . pic.twitter.com/dglRv157YI 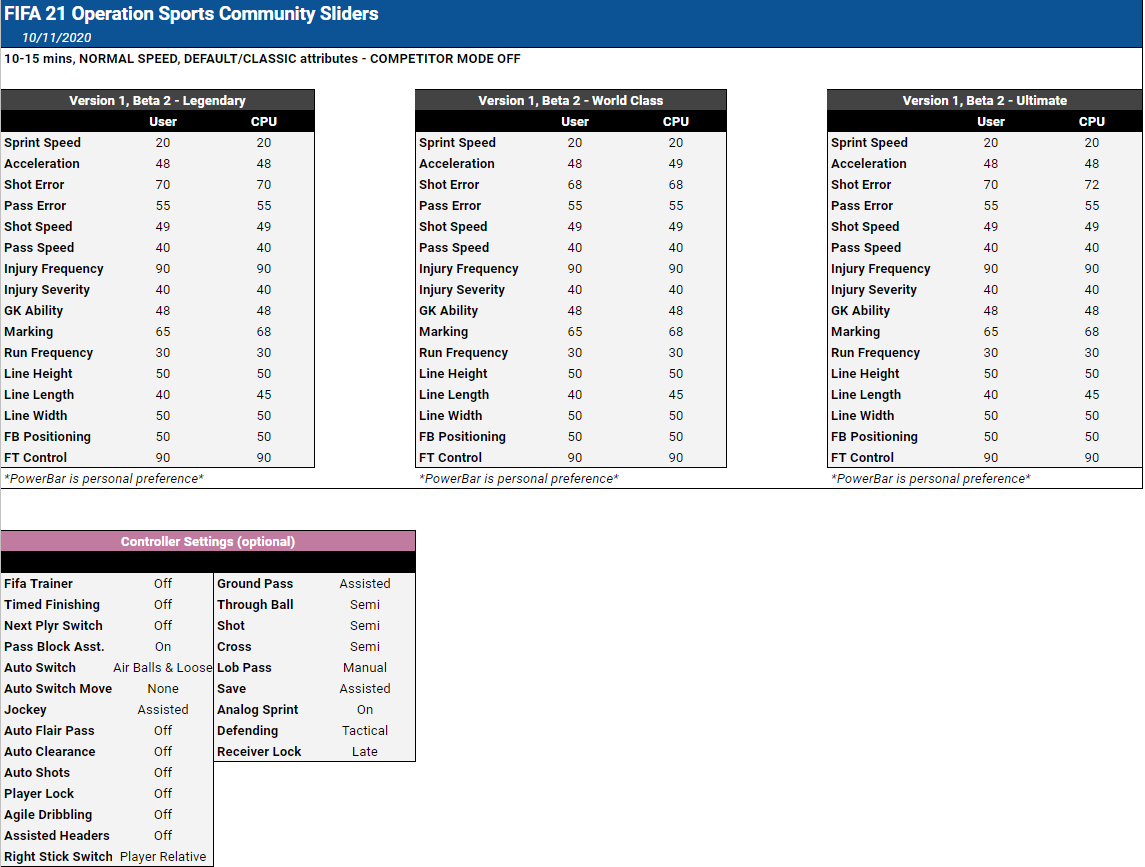 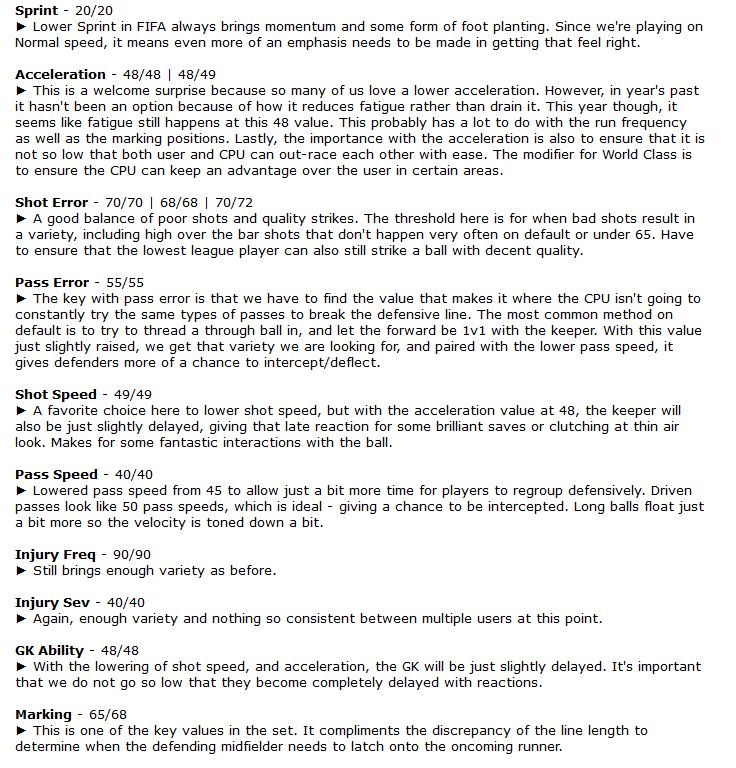 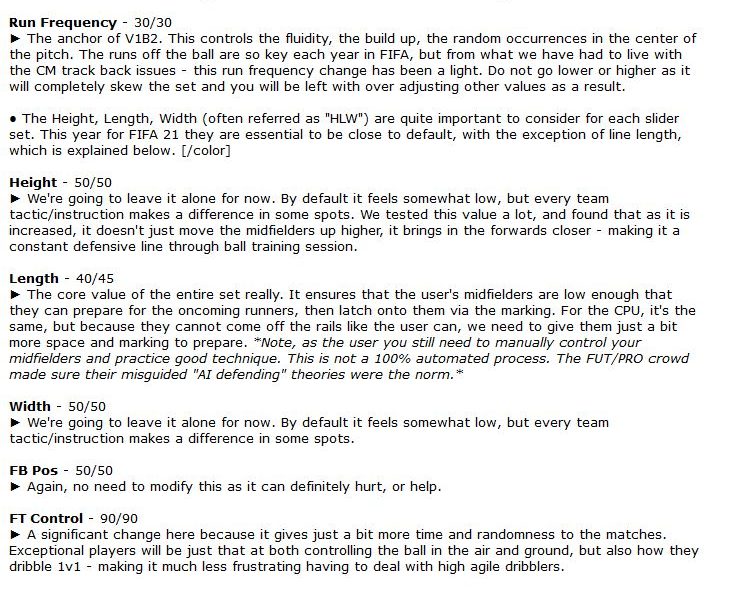 We’ve been working on getting the Version 1 slider set in a good place, and after a couple changes, we feel it’s in the best spot possible. Let me stress again that by no means are the central midfield issues fixed. There are a lot of other values that come into play from an attribute standpoint. Jrn went into great detail of testing over the last couple of days.

“The big 3 attributes to get midfielders to play defense appear to be Reaction, Aggressiveness and Vision. If one of those is too low it throws off everything and they will almost always stand around. The higher those are the more likely they will track runners and defend. Having high interceptions and position attributes also contribute but don’t need to be as high. Those attributes are not 100% going to guarantee they do their job but they are more likely to be engaged. It’s not a fix but something to be on the look out for.”

While sliders cannot fix these issues, what we can do is try our best to distract the players from being the source of frustration for users. To do this, the sliders have been modified just slightly from V1B1, but modified in the right spots. We took our time to go in 5pt increments of testing, but also explored extreme values as well. The good thing is the best base was already there, and just a couple significant tweaks made the difference.

First off, there are 3 difficulties, starting with Legendary, World Class and Ultimate. These are ordered in the amount of time they’ve been tested. A lot of the values are the same because the base set is good where it’s at, there just needs to be some modifiers for the difficulties.

While I will go into the goal of the Version 1, Beta 2 (V1B2) set a bit later, I wanted to place a huge importance to one of the true “game changers” of how our matches have gone, which is Run Frequency at 30/30. This value alone has changed the way the CPU plays, the way the players interact throughout the pitch. We have seen so much variety in the runs off the ball that it truly brings in a different feel than before.

To give feedback, please read the details in the thread for how to give your feedback, and then jump in to trying to help improve these community sliders for everyone else.