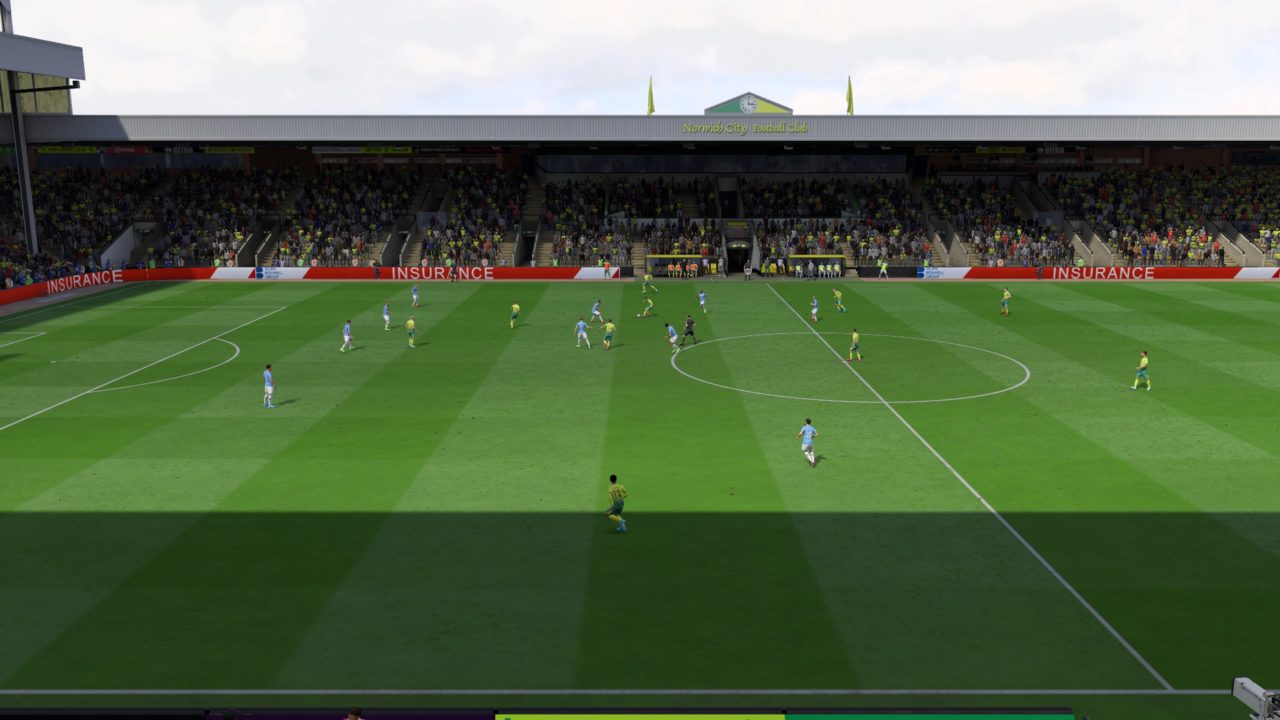 It’s no secret that EA’s FIFA 20 launch was nothing short of a disaster. Everything from gameplay to career mode released with major bugs and/or flaws. While EA sat back and collected feedback, the masses took to Twitter and Reddit with #fixcareermode hashtags, and seemingly with every day that passed new bugs were found and submitted to EA. Last week, EA released patch version 1.05 in an attempt to right the wrongs. Nearing 1 GB in size (on PS4), this is one of the biggest patches the FIFA franchise has seen. So let’s see if FIFA 20 has improved post-patch. 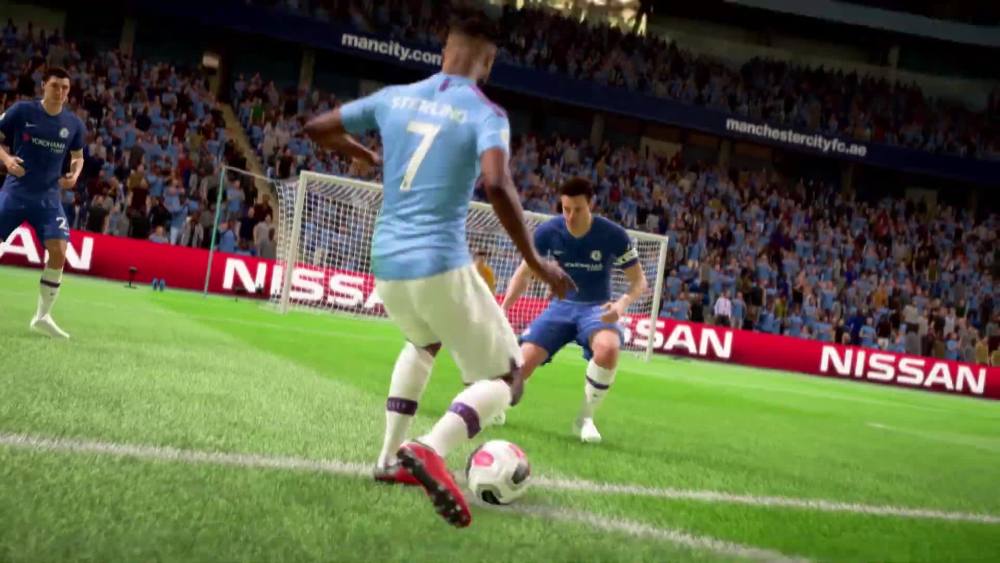 It’s odd, Legendary difficulty released this year and immediately the feedback was that the mode was too easy. Some of the issues plaguing gameplay (lack of defensive AI awareness, inexplicable jockeying, etc.) were amplified on Legendary. Taking a player, almost any player would suffice, you could dribble the entire defense and be in your opposition’s box without much resistance. As evidenced by this patch, the defensive logic, specifically their ability to close attackers down and put in a challenge, was enhanced. However, overall, the game still prefers 1-on-1 situations where you need to switch to the closest on-ball defender because the AI will still contain and jockey, allowing minimal defensive pressure. Unfortunately, without overhauling the defensive system and/or switching to Tactical Defending, defending on Legendary or any level higher than World Class is frustrating.

Enhancements To The CPU AI-Controlled Player

In essence, what EA is saying here is that the CPU AI-controlled player will be more human-like and that’s never a bad thing. The CPU doesn’t utilize step overs too often, but post patch they seem to do a better job at literally not dribbling into you. This tweak and the ability to make more precise dribbles adds some dynamism to the AI’s attack, further emphasizing the 1-on-1 battle. Personally, I haven’t experienced an issue with free kicks because free kicks are so rare in the game, for the AI and Humans. In 100-plus matches I can count on one finger how many free-kick goals I’ve conceded. Crossing logic has been historically poor as the AI struggles with decisions between early and grounded/lofted crosses. They’re a little bit better in terms of delivery in more dangerous areas, but with heading nerfed they often go wasted.

To summarize all of those bullets, EA could have just stated, “We’re making the AI better, smarter” which it does, but only when playing against top clubs. Mid-to-bottom table clubs are often pushovers as a way of improving your goal differential.

The second major tweak to keepers (EA previously addressed the punch vs. catch logic and parrying shots into dangerous areas) looks to be focused on incorrect animations, as well as tightening up ball control. While most players utilize the “call-the-keeper out” command (Triangle on PS4), there were still too many instances where the keeper would come out of his box aggressively only to retreat, leaving him exposed to chipped shots. Other tweaks to the physicality that the keeper faces in the box have been improved, which should cut out on some of the “keeper crowding” and “blocking off” strategies widely abused online. A proper foul system and/or collision detection should have been all that’s required to address these contact problems, but this should suffice and post-V1.05, keepers are better off. They’re more sure in their ball handling, parry less shots into danger, and do a better job of being decisive when the situation either requires them to stay on their line or come out. 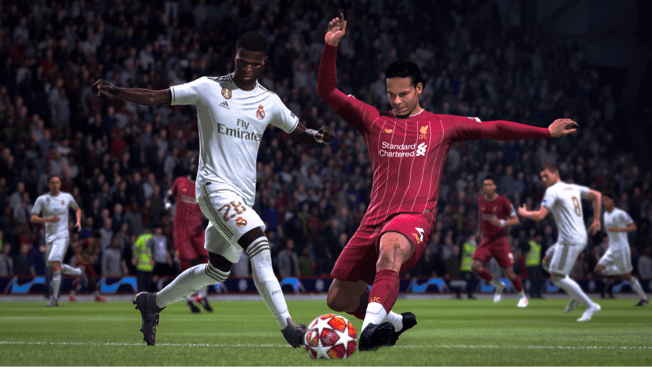 I’ve noticed instances, especially in Pro Clubs, where the linesman’s flag will go up on what seemed like a good back shoulder run only to find out that someone else was coming back from an offsides position not even close to the play. Happy to see this addressed.

Online players have been complaining about input lag for years. The “fix your servers” crowd was boisterous, but when it started affecting offline players you knew the root of the issue was much deeper — and it was. For a long time, I’ve ranted to my FIFA friends that FIFA has too many animations, and it seems like it’s a roll of the dice to determine if the correct one was going to play out. The frustrating part is that it’s most common when shooting. Think of scenarios where you’d rather use one foot over the other, or put your head on the ball instead of using your foot. In the games I’ve played post-patch, there doesn’t seem to be much improvement in responsiveness. Button delay and player switching seem to be just as poor as they were pre-patch, and with defending as a team generally difficult this means poor player switching leads to some nervy moments.

This change only got one sentence in EA’s notes but it was one of the biggest reasons FIFA 20 released so poorly. The dreaded jog animation would always seem to rear its head when the defense was most vulnerable.

Sadly, this still happens post V1.05, just not as frequently. Perhaps players getting used to having to switch often while defending has lessened this, but it still’s evident here and there on goal replays. The defensive side of the ball has been the primary focus for patches since FIFA 20 first released, and with improved positioning (again, since its release) added together with more familiarity with the defensive mechanics, it’s about as good as it’s going to get until FIFA introduces a new defensive strategy. 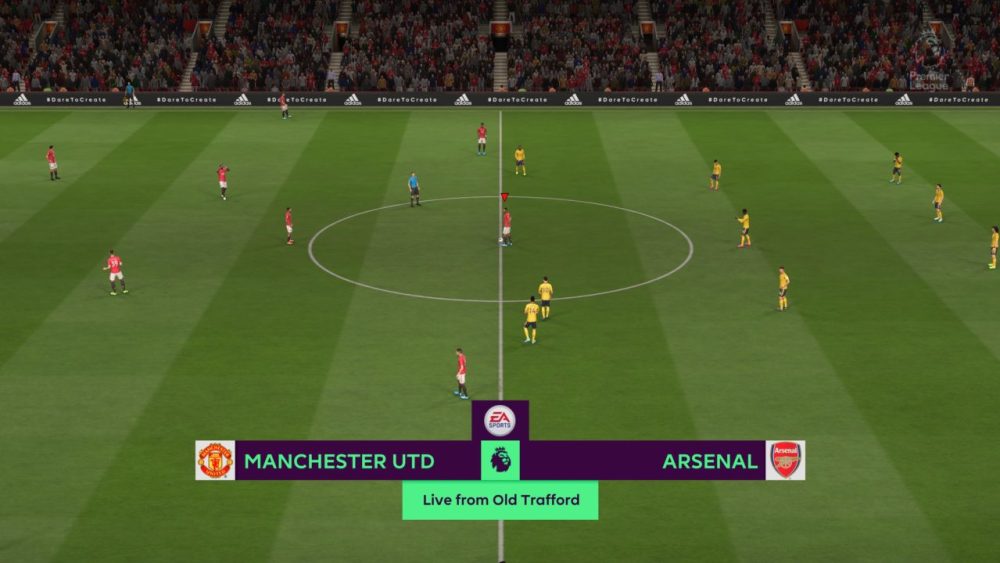 If you would have asked me what two areas were most in need of a patch, without hesitation I would have said career mode and gameplay. With the oddities and bugs that have made it unplayable on EA’s radar, most of us expected this patch to correct some basic things in career mode such as teams actually fielding a decent XI against you, or the post-match press conference reporters asking you questions that have no relevancy to be addressed in V1.05.

OK, you added goal difference but somehow transposed the columns.

The first bullet is an important one that ruined the on-the-field gameplay while also running roughshod over the sim engine, causing clubs like Norwich to lead wire-to-wire in the Premier League. This has been fixed and the AI will field a stronger XI, but somehow the sim engine across all of the top leagues frequently has leaders who put Arsenal’s Invincibles to shame 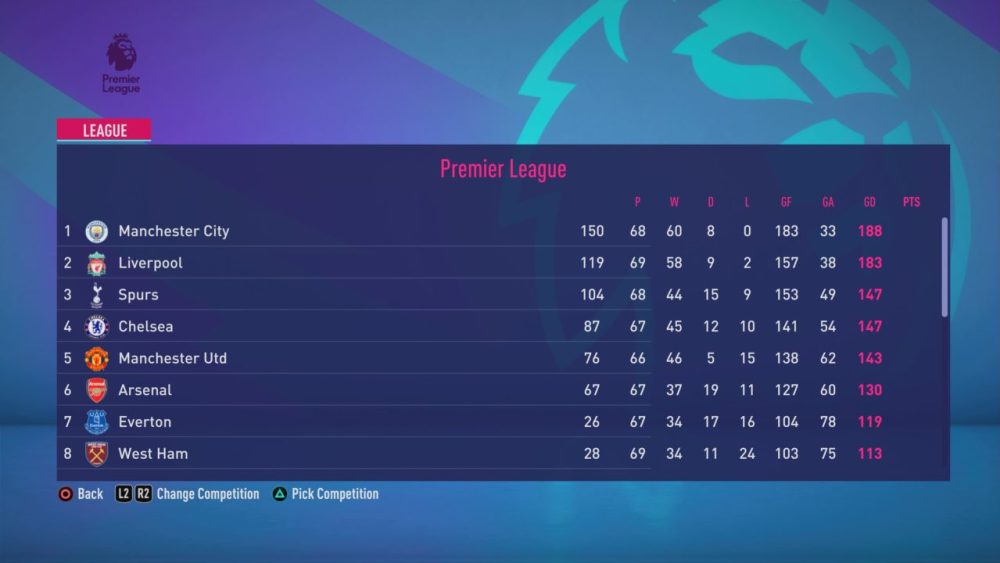 Oh, 68 matches played? Yeah, I’ve noticed that if you get fired before the season starts and take another job, the league you were managing in will momentarily pause, and then go on to play something like 30 matches in a month and a half. Man City with a five-point lead and a match in-hand. Prep the champagne.

There were certain seemingly random actions that would see you get fired on the spot. Re-signing players early could get you sacked. Missing on some of the season objectives that should be overlooked if the results are favorable could also get you sent on your way. Managers these days have a  tight leash, but not that tight. Post-patch messing around with an Everton CB I’ve intentionally gone full Everton and made some questionable personnel decisions, like putting Seamus Coleman on very high wages. However, I was sitting second in the table behind Liverpool so perhaps the board overlooked the long-term commitment to a 31-year-old fullback coming off a horrendous injury.

For as large as patch as this was, and with so many areas across multiple modes addressed, I thought I’d come away feeling better. Instead, I’m still trying to figure out what FIFA 20 is at this point. I’ve come to grips with the fact that I have to defend the way in which the game was designed to defend. Fighting it will only frustrate you further. That doesn’t mean you have to resort to online cheese methods like dropping back to a depth of 0 in order to defend, but instead adapt to the new mechanics and make the best of it. The new defensive tweaks don’t do enough to move the gameplay needle, and while EA fixed the issue plaguing the actual match experience, the sim engine somehow went on overdrive as the top clubs rarely even drop points, routinely finishing with 105-110 points — sometimes even perfect records. With everyone apart from those top clubs being easy marks, the game can become predictable and a little dull at times. Sadly, it looks like I’ll have to wait a little longer to start my career mode.

What are your thoughts about this most recent patch?