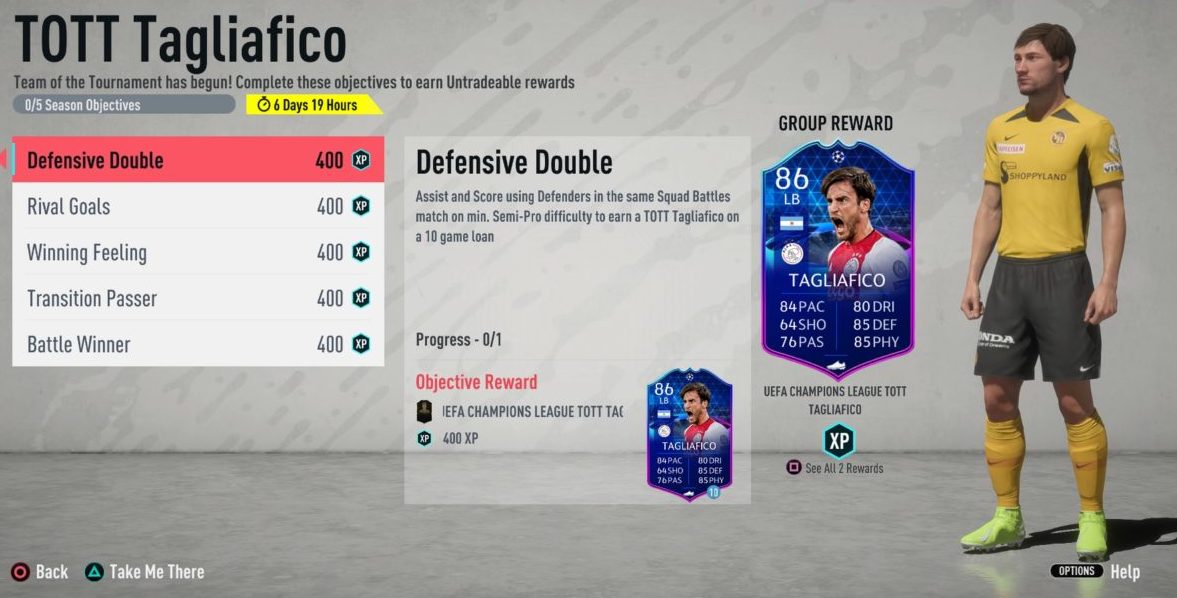 We got a ton of new content in FIFA 20 FUT on Friday, so I just want to briefly hit on everything that’s here.

First up, we got a Karim Benzema Player SBC to coincide with the release of the Team of the Group Stage — a batch of 16 Champions League players and two Europa League players who will be in packs through the weekend. This SBC is running about 75K right now, according to FUTBin.

It consists of two challenges:

Speaking of the Team of the Group Stage, the players in those packs are:

We’ll take a deeper look at some of these players in an upcoming post. In addition, a reminder that these do not upgrade like the Road to the Finals cards do round to round. These cards will remain static.

Also, on the topic of Messi:

Messi's 96 rated POTM item will be made available via SBC from Thursday, December 12 at 6pm GMT! #FUT20 #FIFA20 https://t.co/ROx7uJInPu

It will be interesting to see the cost to complete this SBC. Also, I imagine we will see inflation on various La Liga players in anticipation of this SBC. (But an overall crash in some other areas, including with Messi cards.)

The other Team of the Group Stage player who is available to you comes via season objectives. Nicolas Tagliafico can be unlocked if you complete these objectives:

I’ve said all I can about using Rivals to do these objectives, but these are not too terrible beyond winning four separate Rivals game while scoring with Argentinians. Even that one is not so terrible because at least there is a healthy amount of quality Argentinian scorers. Still, this is not the most enjoyable way to go about unlocking players.

That being said, we’ll take a closer look at this card and the Benzema one when we look at the other Team of the Group Stage cards.

I would probably pass on these unless you have extra untradeable cards to spare. I am also still waiting on a truly memorable SBC that shakes up the UCL market, or maybe the FIFA team is fine with the UCL blues being similar in price to the base golds — it would just be a slight tweak from prior seasons if that’s the case.

The Week 5 season objectives are also out now. As always, these are helpful to do in order to get closer to the level 30 season level. You can also always catch up on your old objectives because none of them expire until the season rolls over.

Finally, we have a new Elite Storyline with three objectives attached to it. Again, these are more to get you closer to the level 30 season rewards and make you feel like those Storyline players you unlocked are serving you in some capacity.

These are the sort of Rivals objectives I’m fine with having in my to-do list. I can do them if I want, but I’m not losing out on anything major if I have no interest.