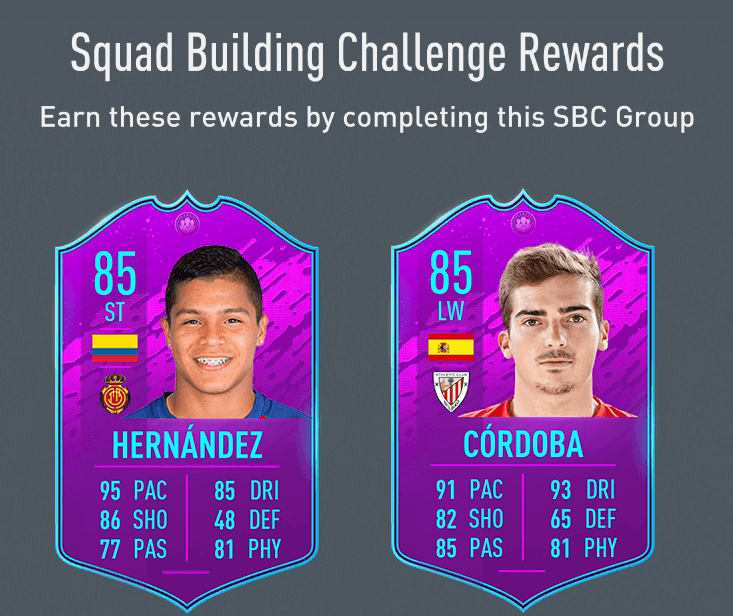 We finally got the FUT La Liga SBC today, so we can scratch another league SBC off the list. It’s not the most known players, but again, this is the trend for the season. Some people will complain that we’re getting Cordoba and Juan Camilio Hernandez, and I get it, but it’s not surprising. The league SBCs have followed this same “under the radar” trend all year for better or worse.

There is also a Player Moments Schar card that will most likely please more people. It’s also a bit of an oddly statted card, but we’ll get to that.

So you’ll need to do 20 La Liga teams to select from one of two options. The packs back are not amazing, but there’s a Mega Pack in there, an Electrum Players pack, a Jumbo Gold pack, and a couple other decent gets to help offset the cost somewhat. As of now, the cost to complete the La Liga SBC one time is roughly 223K on PS4, according to FUTBin.

Okay stats here, but cost holds him back, much like it does for Hernandez. After Hazard and in-form Griezmann, Cordoba is technically one of the best options at LW in La Liga, but I hardly believe people want to pay this amount to get that sort of niche card. After all, just save up a little more for a Griezmann, or buy a less expensive version of Hazard if you’re going down that road.

Hernandez again serves his purpose as a pace-first striker, but we’ve had better options in La Liga this year. There was FUTMAS Inaki Williams to name just one (and he was cheaper), and you can get better strikers for cheaper in La Liga like Benzema. That being said, I do like Hernandez this year and have used his base gold for various challenges, so if I have to pick one option it would be this one.

The more exciting card today for most is probably the new Schar card. His defense and physicality stats are very good, and he also has some weird bonuses like 97 shot power, 88 long shots and 99 penalties. I don’t know how useful any of those things end up being on a CB, but they’re certainly unique. His cost is right around 120K right now, according to FUTBin.

There are two SBCs associated with unlocking this card:

Some other Schar benefits are he’s a Swiss EPL player. This opens up some easy links to other EPL players, and maybe more importantly helps him fit with Road to the Final Mbabu. Mbabu is a Bundesliga RB, and he remains very much in the meta for many teams. If you missed out on Mbabu, then obviously this does you no good, but it provides optionality to others.

The only other helpful link for a bunch of players may be for those who also are using Akanji in the Bundesliga. Beyond that, I don’t think many folks are running Swiss-specific squads because it would probably just be a whole bunch of goalkeepers out on the field.