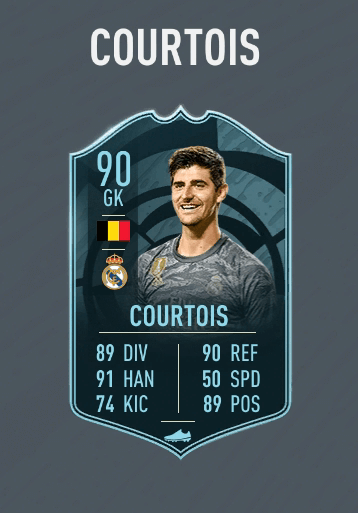 The only new thing added to FIFA 20 FUT today was Player of the Month Courtois. That is a little disappointing because a goalie is just never that exciting as the sole piece of new content. So I will get to that card, but I first want to talk about goalies themselves because I think it’s more interesting.

Goalies are the weirdest thing to talk about in FIFA almost every year, and this season has been no different. Since it’s the position that’s out of your control most often, it’s the one everyone comes up with the most theories about. Who plays the best and why? Who plays well below or above their ratings? The consensus answer for best keeper this season so far has been ter Stegen. There’s been a small push from Team of the Year Alisson, and sometimes you’ll see a Schmeichel or Oblak mention, but mostly it comes back to ter Stegen.

Why ter Stegen? Because people just think he plays the best. No, but why? Great question. But if you look at this La Liga Player of the Month Courtois card, it’s theoretically better than ter Stegen. So why won’t Courtois overtake ter Stegen? A couple reasons. For one, users already trust ter Stegen and have no interest in rocking the boat. Another reason is a little more strange, but it’s probably because a portion of the FUT community thinks Courtois is too tall.

Quick Analysis: Courtois is 6-foot-6, so even though he has better ratings than gold ter Stegen, the concern is he will give up more goals inside the box than 6-foot-2 ter Stegen. For whatever reason, there is a theory among a sizable chunk of players that Courtois struggles with low shots more due to being too tall, and so he’s only better than ter Stegen on long shots. Since long shots are not really the meta this year, that means Courtois does not get that same boost.

Do I buy this? Not really. But here’s the thing, it’s not an easy thing to test. Unless you manually move the goalie, everything else is in the AI’s hands. So it really comes down to personal preference, what’s happening in your games, and then some level of groupthink. For those reasons, ter Stegen is the overwhelming pick at goalie.

Courtois’s price is not anything crazy since a lot of people have a couple untradeable in-form players to spare. If you have those players, his price is close to ter Stegen and other meta goalies in the 90-91 overall area. The other thing to consider are his links. He does green link to Varane, and so that’s the other component to consider. Since Belgian and German center backs are not used too much on high-level teams, that aspect does not come into play when differentiating between La Liga Courtois and ter Stegen.

So if you use Varane and Militao, then Courtois might be the play. If you use Pique and Umtiti, then ter Stegen probably makes more sense.