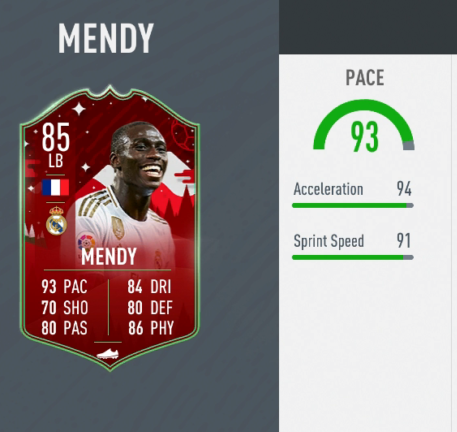 FUTMAS day 10 was an interesting one in that we did get two more very good SBCs, but the value is arguable for both of them on different ends of the spectrum. So even though loans are available for both, I feel like it’s still worth doing a FUTMAS Mendy and Sanchez review.

With FUTMAS Mendy, it all comes down to your philosophy. He competes with guys like Semedo, Theo Hernandez, Roberto Carlos, league SBC Dalbert and a couple others for raw pace, but he’s right near the top of the list for all-around pace, dribbling and defense. But here’s the thing, not everyone activates their left and right backs. Now, I personally like using my backs a lot. I use the LWB and RWB position a healthy amount, and so when I go to four in the back I will also allow my LB and RB to push forward. It’s hard to find someone better than Mendy when it comes to everything he brings on top of the pace when pushing forward.

On top of that, this is a real and true update on a very good 80 overall gold. However, if you have your defenders mostly sit back and not push into the attack, then obviously there is no need to spend nearly 300K on FUTMAS Mendy. However, I do not consider him that overpriced. He is 100 percent one of the best LBs at his position when considering the total package. On top of that, he is a true offensive threat who can take it from box to box with his speed and skills.

I think FUTMAS Mendy is worth the cost, but I have passed on doing him because I just don’t want to eat into my coins at this point when I’m thinking about upgrading my team elsewhere. I like what I have at LB enough as is without needing the very top tier at the position. However, I was sad to see his loan expire for sure.

Base cost: 71K on PS4, according to FUTBin

FUTMAS Sanchez also has two-star skills with a three-star weak foot. In addition, he has high defensive work rates and medium attacking work rates with his 6-foot-2 frame.

Sanchez is the much cheaper option when compared to Mendy, but even though he is an 85 overall, I do think he’s much cheaper because he is inferior to Mendy. On top of that, this version of Sanchez is just not a big enough of an upgrade to be worth the extra coins. Columbia has received a lot of love on defense as of late, which makes doing him more intriguing, but I was not baited into doing the SBC after using the FUTMAS Sanchez loan card.

In short, I think his base gold is still good enough if you want to use him because the whole point of Sanchez is just to be a big body who can move around a decent amount. However, he still feels slow when I click onto him at first (probably because of the acceleration) and he’s not really more mobile with the ball in FUTMAS form. He’s still a great tackler and he bullies people on the ball, but I think someone like a base gold Joe Gomez is still better if you want a big and pacey CB in the EPL.