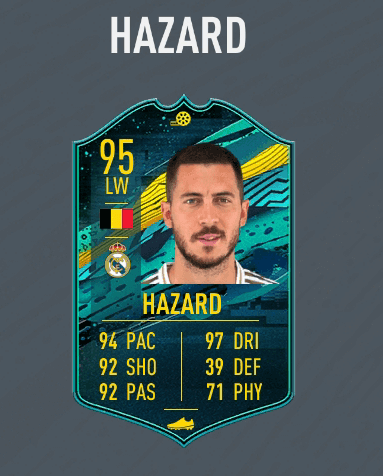 A light day for FIFA 20 FUT, with one hulking presence in the form of an Eden Hazard Flashback SBC. We also get the return of a tradeable pack for the TOTY challenge.

This SBC will not be cheap, but it’s a 95 overall so it should not be. There are six challenges associated with this amazing Hazard card. The price right now to finish all six challenges is roughly 1.3 million coins, according to FUTBin. It’s a lot, but this card should not be cheap. In addition, you get six packs to offset some of the cost. I think this is marginally overpriced considering you can get his 92 overall versions for much less, but this is not a shocking price.

The odd part about this Eden Hazard Flashback SBC is more that the loan card costs roughly 16K, so it’s not the cheapest proposition to test him out for review purposes.

The TOTY challenge is thankfully back to being tradeable today, but the cost also went up a bit to about 10K. You get get a Rare Electrum Players pack for your troubles.