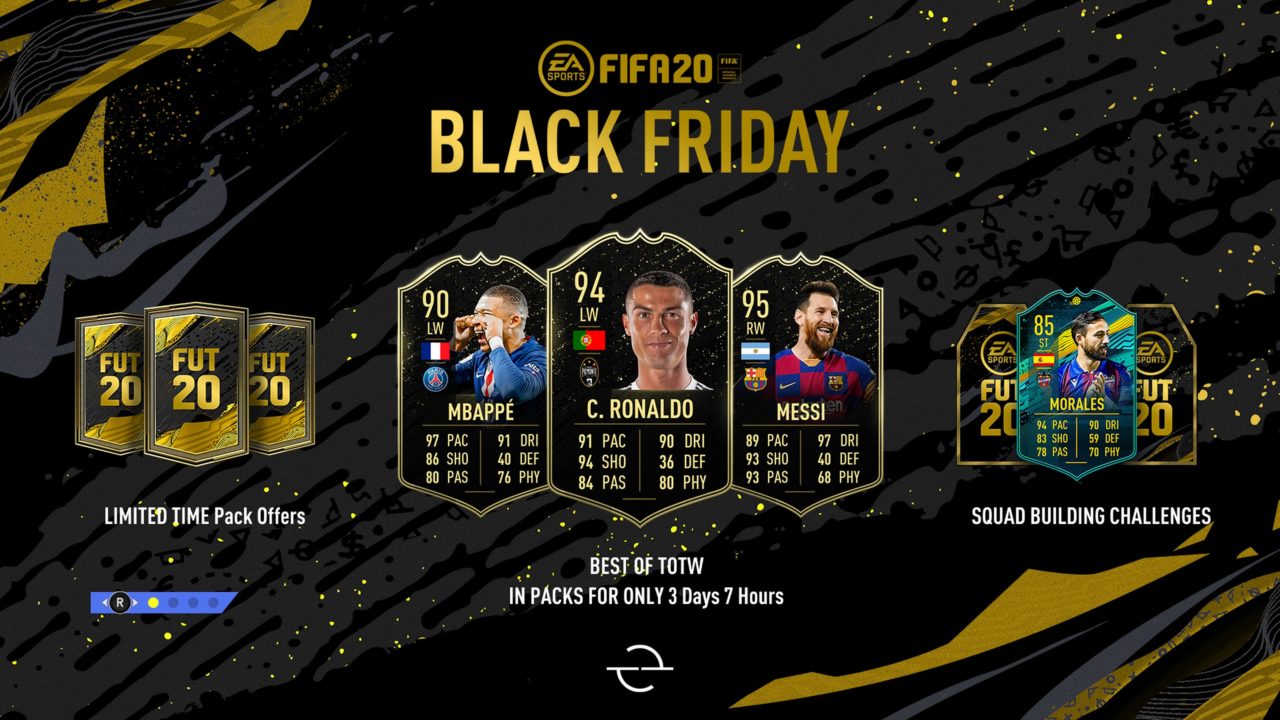 We’ve let the pros over at FUTBin and co. handle keeping people posted on every single flash SBC and pack promo being revealed hourly, but we still wanted to give you an overall recap of the new content out there during the ongoing Black Friday promo in FIFA 20 FUT. 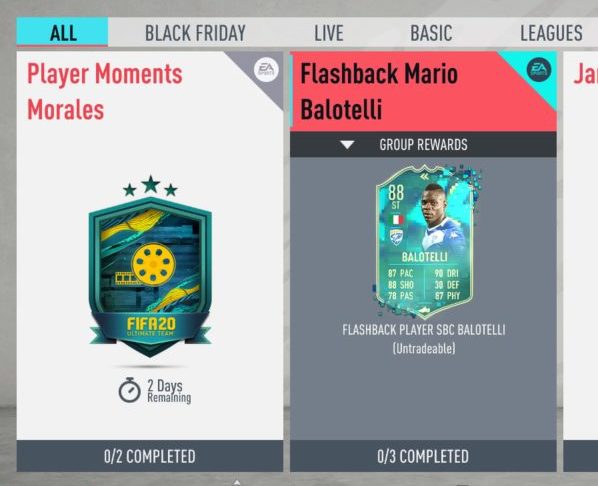 Starting with the introduction of a new card back, we did get our first Player Moments card. Morales will take roughly 200K coins to complete from scratch.

He is a four-star skills, four-star weak foot La Liga Spanish striker. He has medium defensive work rates and high attacking work rates. In addition, he has outside foot shot and finesse shot traits.

The main appeal of this card is the strong links in La Liga, and that he also ties into the recently released David Villa SBC. Morales becomes a top striker option in La Liga, and now that the price has come down (for now) to closer to 200K, this is a bit more of an easy sell. He has terrific composure and should be very dangerous getting behind defenses. His agility is not incredible, but the ball control and dribbling should make up for it. I see him as a great fit in two-striker systems or just as part of a speedy combo with David Villa, with the Spanish midfielder of your choice feeding them through balls.

You have until Sunday night to finish this SBC.

Super Mario is the other flash player SBC that is available right now until Sunday night. Balotelli has a track record in FIFA of going unused due to feeling like a truck when he’s turning, and I don’t think that will change here. As of now, the SBC costs about 200K from scratch to do, according to FUTBin.

He has four-star skills moves and a four-star weak foot, along with low defensive work rates and medium attacking work rates. He also has outside foot shot, flair and power free-kick traits.

The stats look great, except with the 80 agility and 56 balance the same concerns apply. He might be useful as the short man who can hold up play and shield the ball. He’s also going to be a great finisher with headers and first-touch strikes, especially with 92 composure, but I have a sneaky suspicion he’s still going to be tough to maneuver even with all these other flashy attributes.

Week 4 objectives were also dished out, and with these objectives some people should be inching relatively close to the level 30 rewards if they have been keeping up with all the XP opportunities. You get a Major Lazer jersey for knocking out the bronze objectives, and like most bronze objectives they’re straight forward. 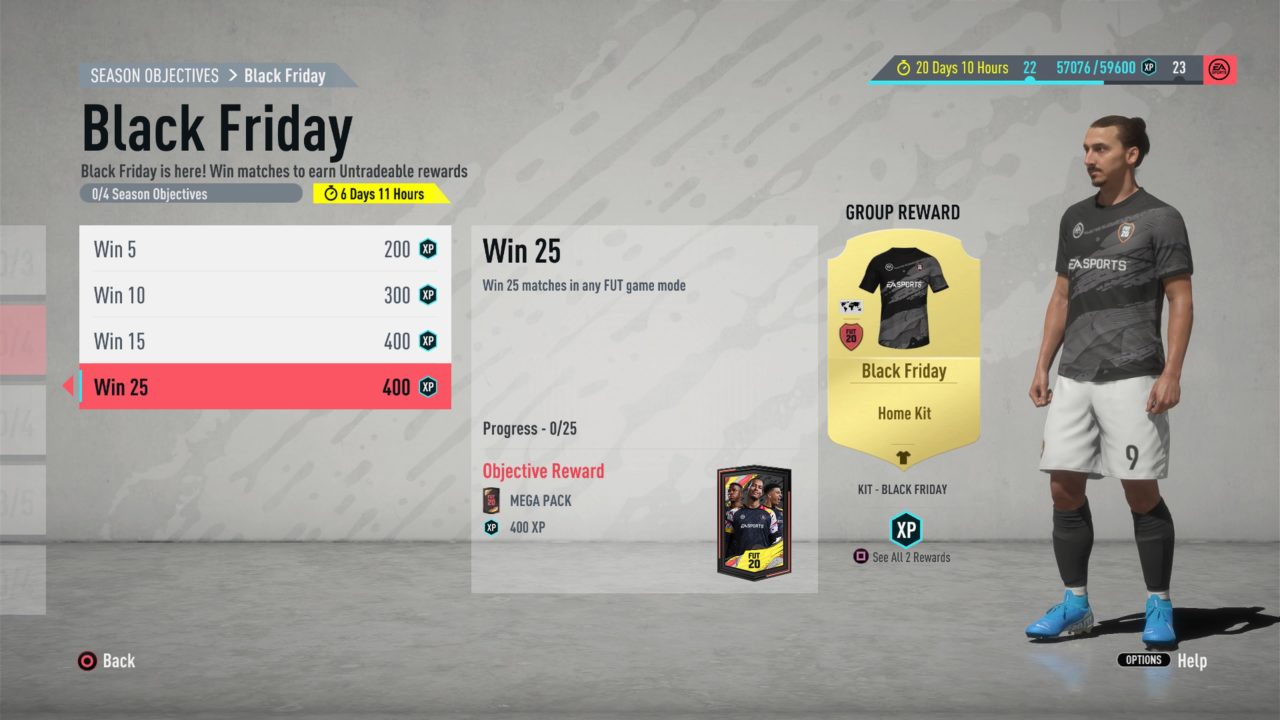 The cooler set of objectives released yesterday were the Black Friday ones. At 5, 10, 15 and 25 wins, you will get rewarded. And the great part about these objectives is they are based on wins in any FUT game mode, so you don’t have to do Rivals or Squad Battles if you don’t want.

You will have until next Friday to complete these objectives. I hope EA does more of these sorts of objectives going forward, both rewarding players with better goodies and also allowing more flexibility in terms of how challenges are completed. The FUT team should be more interested in getting players to do Drafts and Friendlies and all the other cool stuff the mode has to offer. Too much of the focus right now is on Squad Battles, Rivals and Weekend League, and in general far too many objectives are tied to Rivals.

I won’t spend much time mentioning promo packs, but just know they’re still happening all weekend. They are not rotating every hour anymore, but they’re still rotating multiple times throughout the day. To me, the best source to use if you want to keep track of the promo packs is the FIFAUTeam. 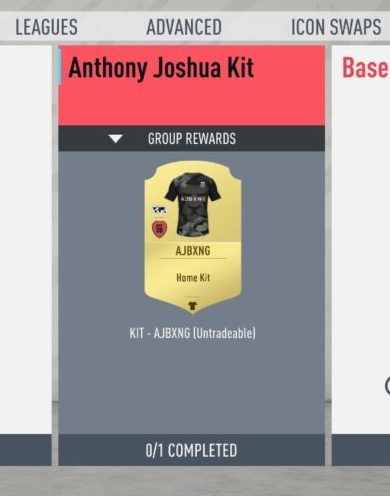 Before getting to the upgrade SBCs, just a quick mention that there is an Anthony Joshua Kit that you can snag on the cheap if you want.

Now, getting to the bigger news of today, FIFA dropped a whole bunch of various upgrade SBCS on us early in the afternoon:

The first batch includes an upgrade opportunity for any of the big five leagues (Bundesliga, Ligue 1, EPL, La Liga, Serie A). The requirements are straight forward for all five:

For this, you will get 3 gold players (1 rare) from the league you select. Odds are you will end up losing coins on this one, but you can do it if you want.

Next is the same concept, except now you get two rares that are 81+ rated from one of the big five leagues you choose. The requirements are:

The price to do these will fluctuate a bit more depending on the league, and once again you’re probably going to lose coins doing this. However, I personally did it a couple times because I had a bunch of untradeable cards I was never going to use. So you can at least swap them out for something that you can do something with, which includes — at worst — discarding them for the 600+ coins each.

Last up, you have the TOTW Upgrade SBC, which comes in two different flavors: tradeable and untradeable.

This one will run you about 23K from scratch, and it’s not great value but I’ve seen worse. However, I am anti-untradeable cards in any concept I can avoid them, so I won’t do this one.

This one will run you about 40K from scratch, and this is probably worse value than the untradeable TOTW upgrade. Yes, you could pack something great, but the chances are you’re going to end up with something that is 83 or below and you’ll be out a bunch of coins.

The catch with both of these is you can hold them and not open them. So if you want to wait for future TOTW reveals before opening these upgrades, that’s entirely your call. Either way, I would not do these SBCs. And overall, I don’t think any of the SBCs beyond the Morales player SBC is even remotely fair value. The SBCs (the flash ones and these) overall have been a disappointment for the Black Friday promo.

Overall, this promo has mostly mirrored last year’s, which also has left it feeling a little boring and by the book. The Black Friday objectives are the clear highlight for those of you who did not spend money on packs. However, by that same measure, these promo packs were not very interesting either. This is an event all about enticing people to spend money on promo packs, but the FIFA team didn’t really try to spice the packs up in any huge way, which is an odd choice.