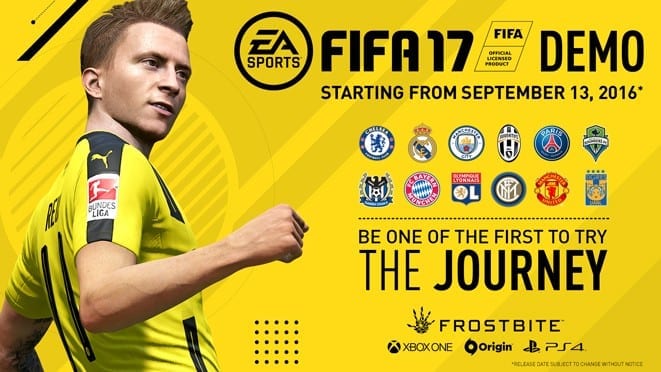 The FIFA 17 demo is scheduled to arrive on September 13 for Xbox One, PlayStation 4 and PC. Check out the full details below.

GAME OPTIONS
For the first time ever in FIFA, live your story on and off the pitch as the Premier League’s next rising star, Alex Hunter. You’ll have the opportunity to play a select experience in The Journey which will be limited to playing as one of the world’s top clubs Manchester United.

Own Every Moment in FIFA 17 gameplay to experience complete innovation in the way players think and move, physically interact with opponents, and execute in attack to put you in complete control of every moment on the pitch.

PLAY AS WORLD CLASS CLUBS
12 clubs included that you’ll be able to play as in Kick-Off.

The FIFA 17 demo will also be available for Xbox 360 and PlayStation 3, but the full details haven’t been revealed.