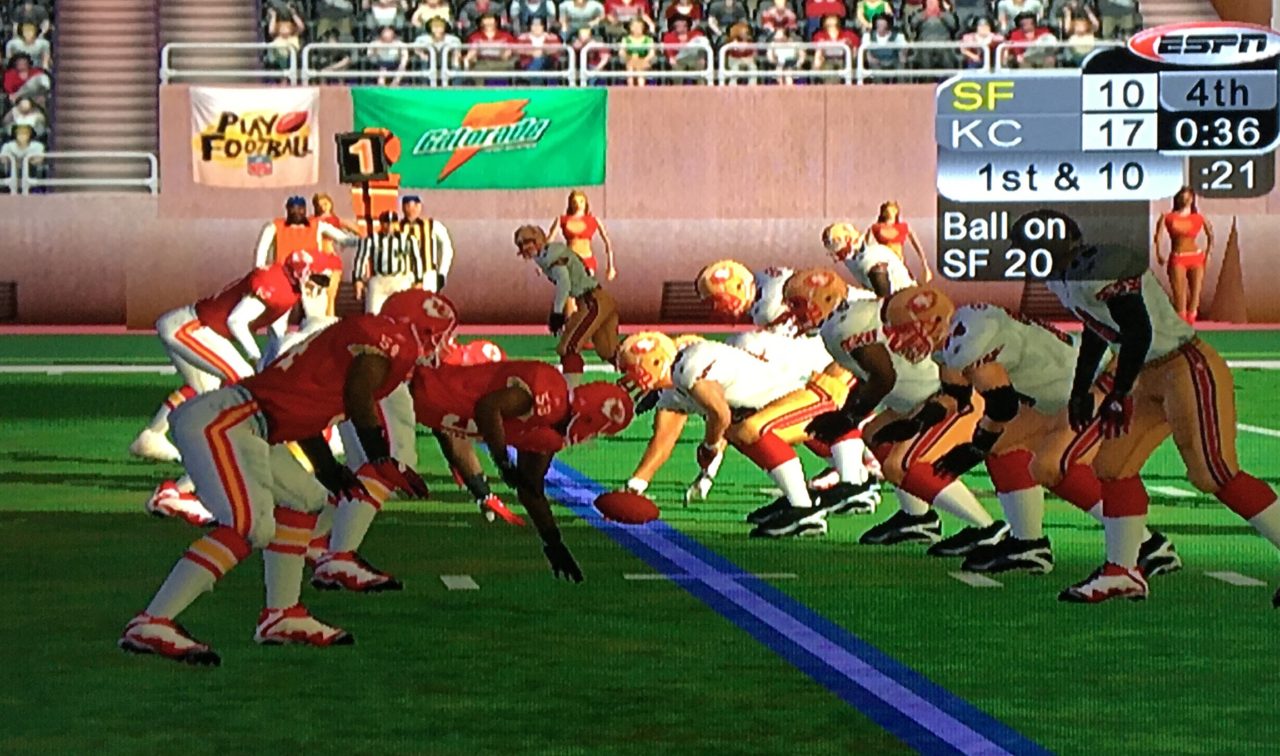 A few weeks ago, I wrote about how — thanks to a number of OS forums users — easy and uplifting it was to update the rosters of NFL 2K5 to the present date. With the Super Bowl upon us and missing my beloved Houston Texans once more, I thought I would have a little fun and add this updated NFL 2K5 to our list of Super Bowl simulations.

San Francisco wins the toss and elects to receive.

The kickoff is returned 36 yards. Garoppolo strikes quickly with a pass to Pettis for 40 yards. Back to back handoffs to Tevin Coleman force 3rd and 4, which leads to an incompletion on a well defended hook pass. Robbie Gould’s field goal is good as the 49ers take an early 3-0 lead.

Sammy Watkins returns the kickoff 23 yards. Mahomes answers with six straight passes to Tyreek Hill to the tune of 16, 5, 14, 15 and 18 yards before a TD pass on a slant route. If it ain’t broke, right? Inexplicably, the Chiefs are called for delay of game on the extra point, but it winds up good anyway.

(A suddenly healthy Jason Verrett was the one who made the tackle on four of the six passes. Also, the game continually calls Mahomes “Patrick” due to limitations in audio files. I wish commentators would take that approach for an entire broadcast.)

The second drive for the Niners is not as fruitful. Garoppolo throws into triple coverage on first down. Two KC defenders have a chance at the pick but can’t come up with the football. From there, Coleman runs for 7, and is then stopped on a pitch play that sets up 4th and 1. Mitch Wishnowsky punts it to the KC 30. 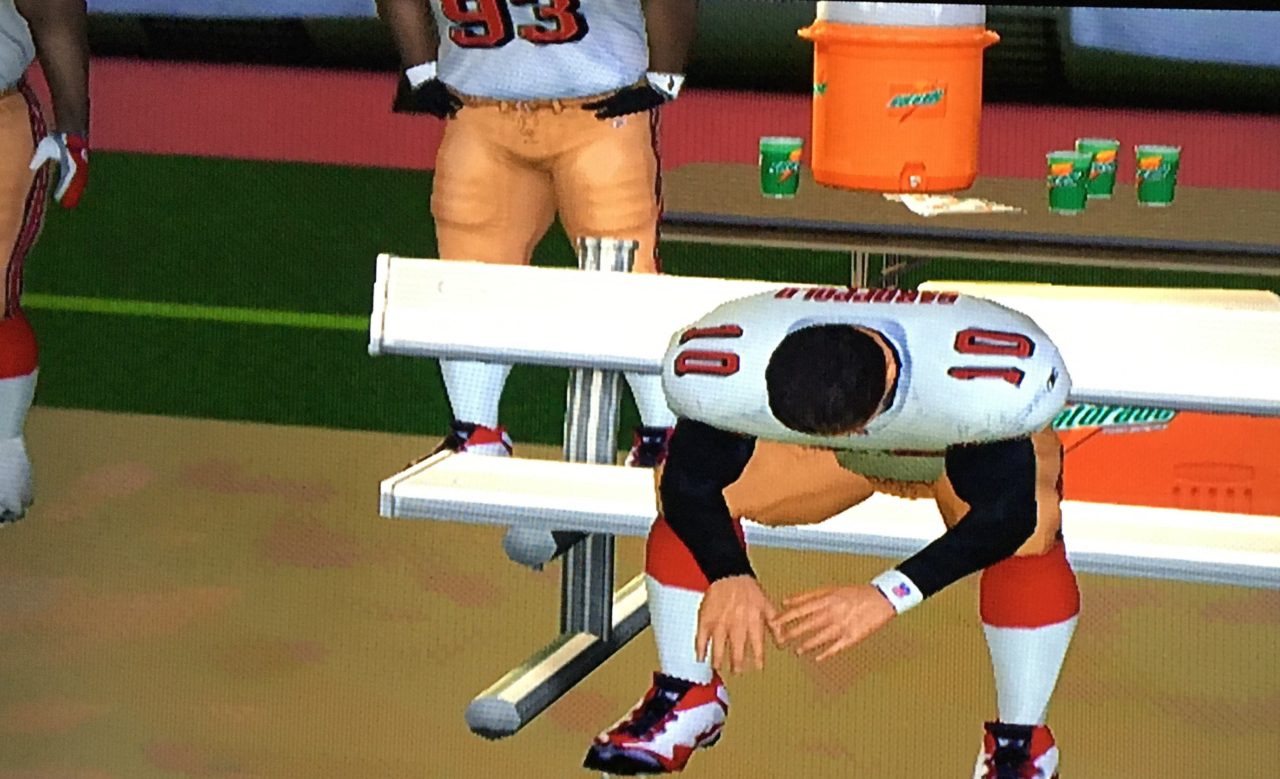 Mahomes’ first incompletion is to Anthony Sherman on a screen pass, setting up a 3rd and 9. He throws another incompletion on third down, and the Chiefs punt it right back to the 49ers. Two Coleman runs lead to 3rd and 12, which Garoppolo converts on a beautiful throw to Goodwin (I know, I know, but I couldn’t quite keep the depth chart perfect for the game). After the conversion, the 49ers continue a steady drive that eats up a lot of the second quarter.

As the drive continues, Coleman runs for six, then five. San Fran is soon knocking at the 11-yard line. Coleman picks up two more yards to lead us to the two-minute warning.

Coming out of the stoppage, Garoppolo’s play-action pass is nearly picked off by Tyrann Mathieu, but Jimmy G’s third-down pass is complete to Dante Pettis for the touchdown. XP is good, 10-7 49ers.

Two-minute drill time for Mahomes, 1:51 in the half from his own 20. A pitch to Williams goes nowhere. Mahomes is then almost picked off by Richard Sherman who had a good jump on the slant. 3rd and 9 winds up a 20-yard pass to Kelce. Hill eclipses the 100-yard mark on his 7th catch, then drops what could have been his 8th. The 3rd and 10 pass from about the 50 is then tipped.

Andy Reid elects to punt even with the field position and time remaining, giving San Francisco the ball on their own 28 with almost a full minute to go.

The most exciting thing that happens from here is Garoppolo’s deep pass is picked off by Mathieu to end the half. 10-7, 49ers lead.

The Chris Berman Halftime Show brings us back to a beloved bygone era for ESPN. Graphics aside, it looks and sounds like a real broadcast and perfectly brings in the ESPN production values. 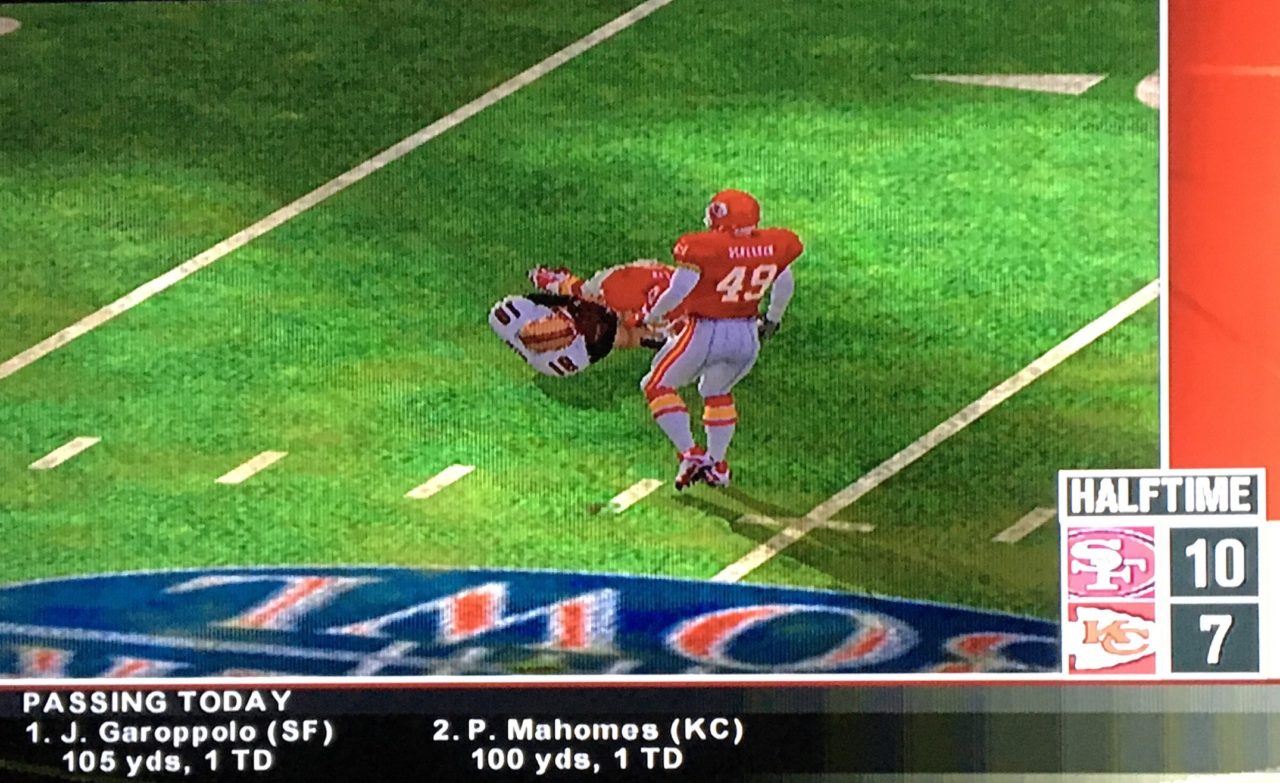 KC doesn’t bother returning the kickoff. The audio brings in Suzy Kolber, who says that she talked to Andy Reid at the half. According to Reid, his “offense needed help” and “struggled to get things going.” You don’t say. Williams runs for a yard, and then Mahomes is sacked by DeForest Buckner. Still looking for that “help.” His next pass is picked off by Tarvarius Moore, who returns it all the way to the KC 10.

The slant to Kittle is broken up, setting up 2nd and 10. Garoppolo’s pass is then picked off by Bashaud Breeland who takes it all the way for the touchdown. What a turn of events. The XP is good, and it’s now 14-10 Chiefs.

From here, 2K5 flexes its stellar production values once more by pointing out that the last two drives have ended in INTs for the 49ers. It also turns out to be perfect timing as Garoppolo drops back and his pass is picked off by Anthony Hitchens. Oh boy. 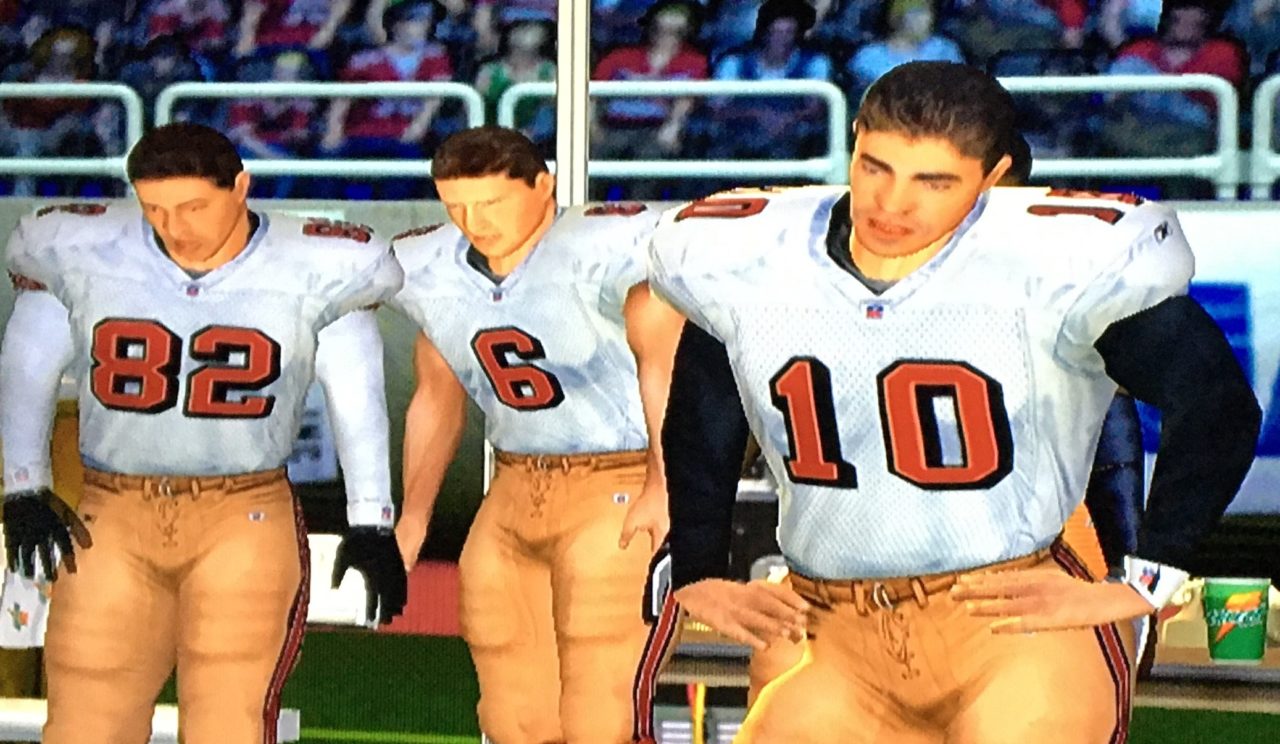 Mahomes goes back to work from the 30. A screen to Williams goes nowhere, and then the commentators lament the three turnovers by the 49ers while Demarcus Robinson catches a 20-yard pass. The Chiefs continue to drive until Mahomes’ pass into the end zone is picked off by Tarvarius Moore again. Could this be a momentum swing for the Niners now?

Coleman loses 2 yards, then gains 8. A Garoppolo lob (Lobppolo?) is nearly picked off. 4th and 4 means another San Fran punt. A handful of runs bring us to the final 15 minutes.

The quarter opens with a KC punt that puts SF at their own 24. Coleman catches a pass in the flat and runs for 7. The commentators point out that Garoppolo barely has over 100 yards and 3 INTs. The run is stuffed, and on 3rd and a yard Coleman picks up the first down on a delayed handoff. Garoppolo does his best Deshaun Watson impression to narrowly avoid the blitz and throws another interception. The commentators are calling it “a nightmare game” for him as the Chiefs get it back at the SF 48. Williams picks up 7, then 10 more, but loses 2 on the next play.

The Chiefs elect to run it three straight times, and it goes about as poorly as you would expect — very interesting play calling here by Reid. A 21-yard attempt for Butker is good as the commentators point out that it was “good clock management” to snap the ball at the last second of the play clock. What a concept. It’s 17-10 Chiefs with 0:38 to go.

Does Jimmy G have some magic in him to erase an incredibly ugly Super Bowl? Here is how the final drive goes: 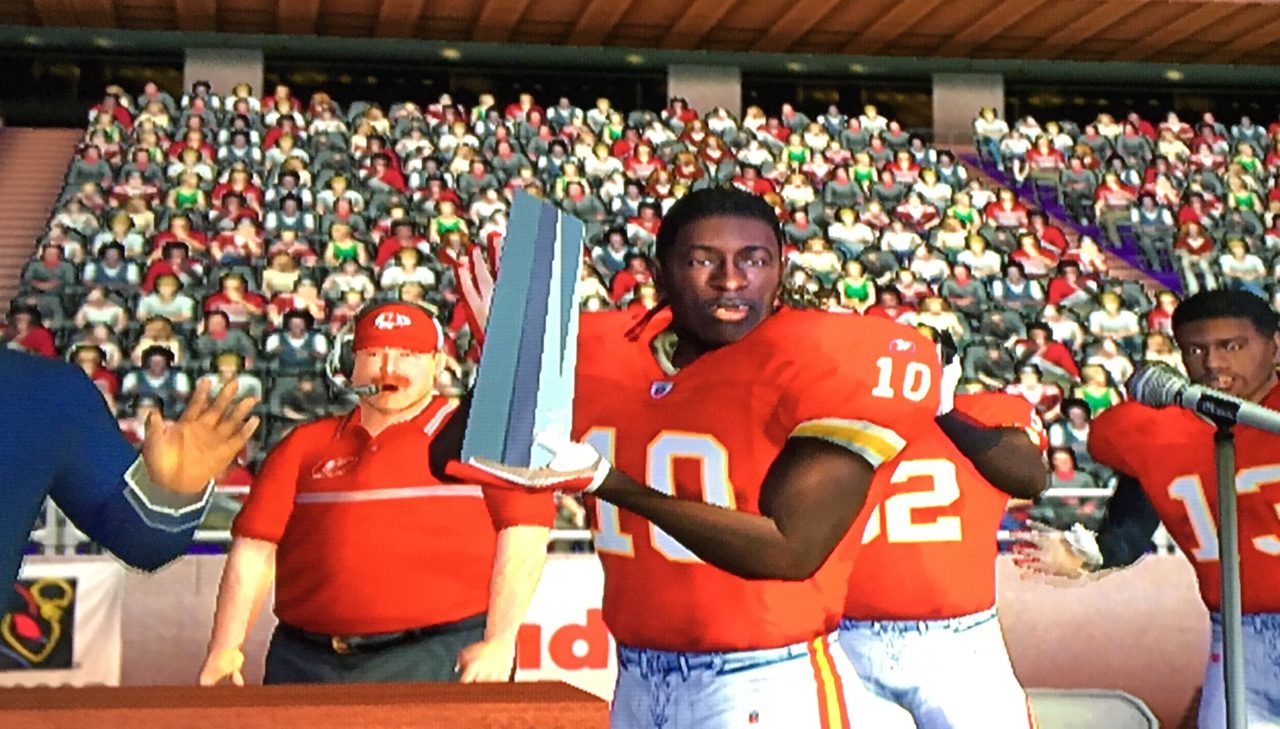 Tyreek Hill is named Super Bowl MVP despite not catching a ball in the second half.

All told, the box score tells a more skewed tale of surprisingly similar results. Mahomes throws for 139 yards and 1 TD while Garoppolo throws for 137 and 1 TD, which says something about how dominant chunks of this game felt. The difference, rather obviously, comes in the form of the interceptions. Garoppolo was just 8-24 while Mahomes was 11-19. Rushing is similarly split as Coleman got 39 yards on 14 attempts while Williams got 40 yards on 17 attempts.

Mahomes’ passing attempts obviously stand out as being very low, but the Niners did control the time of possession. 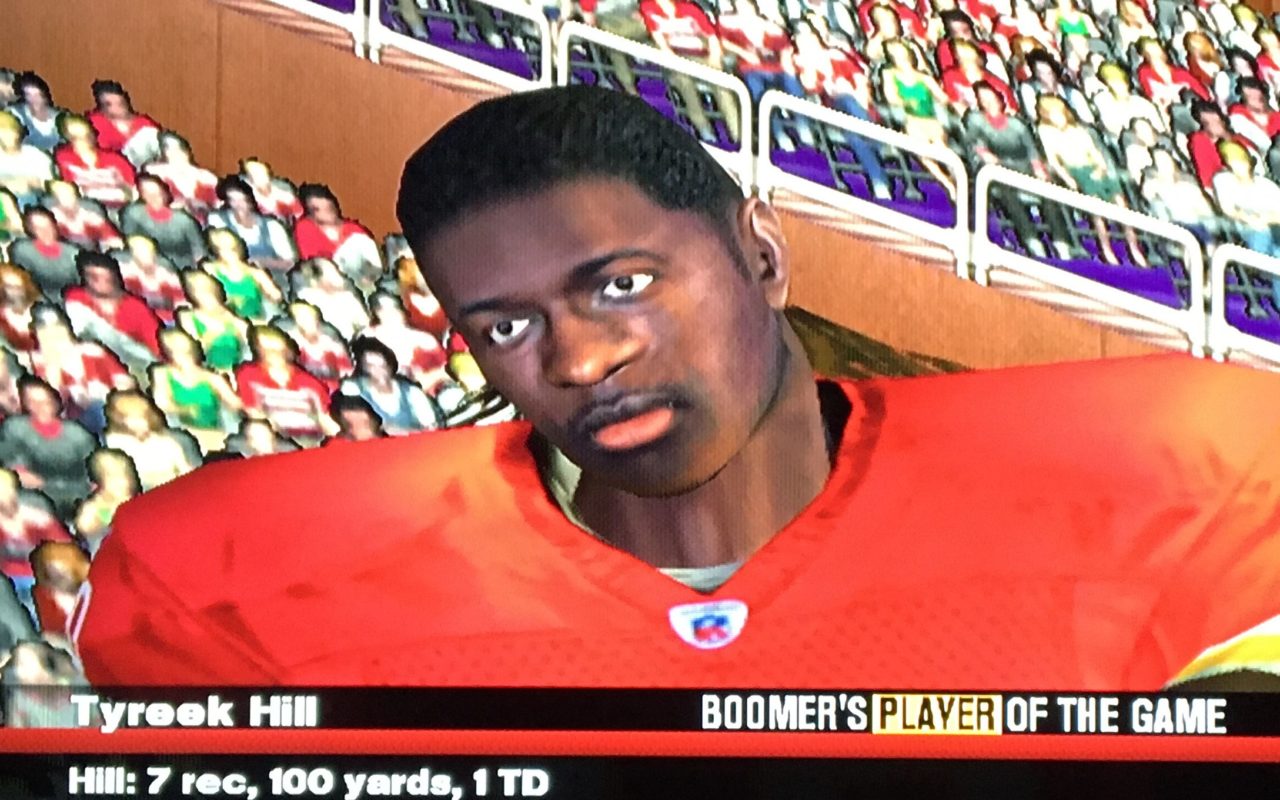 Throughout the game, the camera would cut to little details like Mahomes on the sideline on the phone, fan-made signs celebrating Tyreek Hill, and a vendor tossing food to fans with in accurate jerseys. The presentation package alone was a truly remarkable triumph for a game created over 15 years ago at this point.

Are you surprised by the outcome? Would you have thrown the ball to Tyreek Hill at all in the second half? Do you, too, wonder what happened to Travis Kelce? Let us know your thoughts and any essential Super Bowl recipes in the comments section.