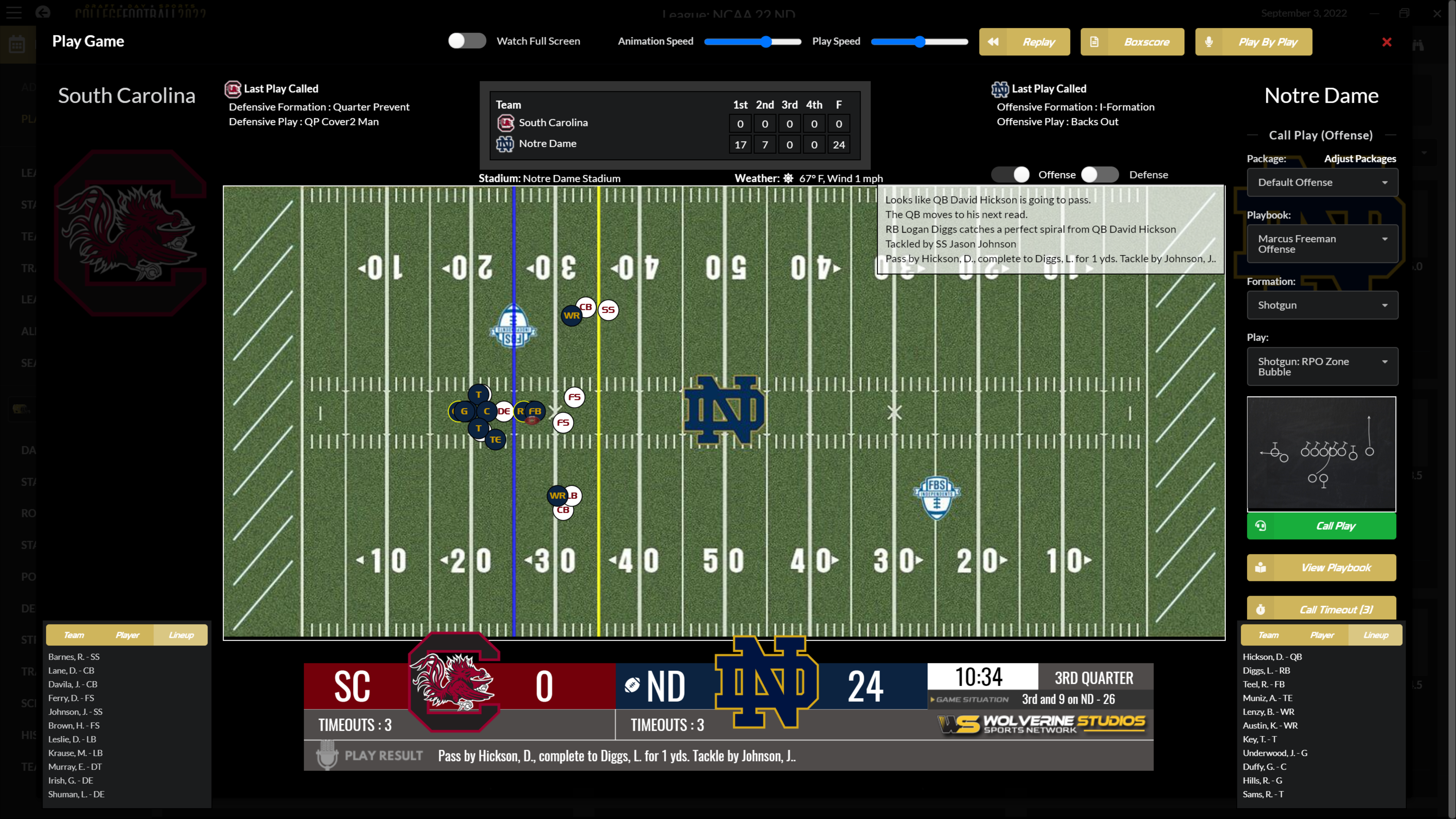 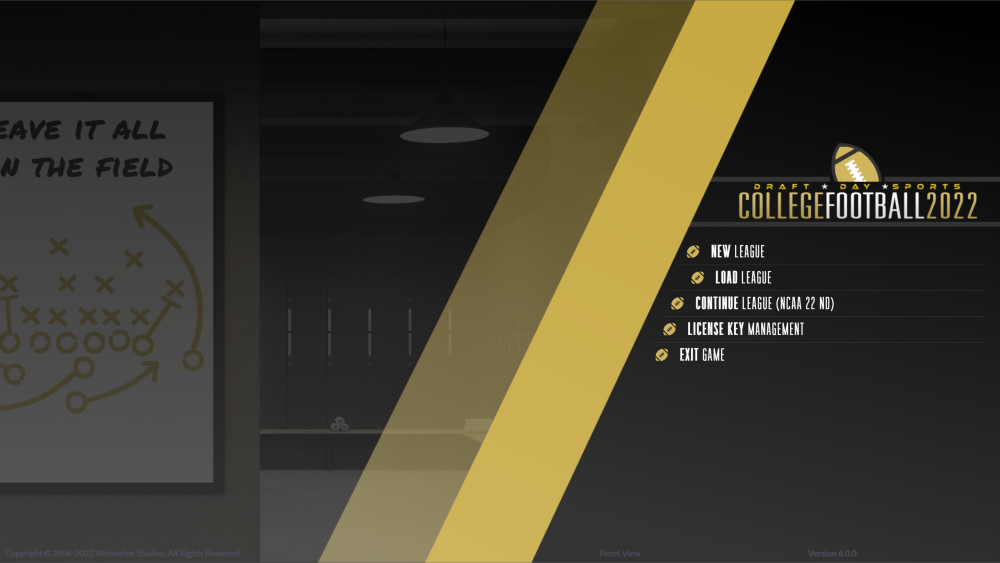 When you look at the list of what is new or improved, the list isn’t extensive this year. If you remove the new conference realignment option and fog of war recruiting style, there isn’t much in text form that is going to make you rush out and buy the game. However, not every single improvement in this year’s game is on the surface. Many will be seen and become tangible to a degree as you progress through the year, especially if you are a returning veteran of the series.

For me, a couple issues in the past have been too many upsets in the top 25, and scores where either an offense or defense has been too dominant and consistent throughout the year. College football is a lot of things to me, but seeing my team play consistent in every single game is not one of the things I could ever or will ever be able to count on. 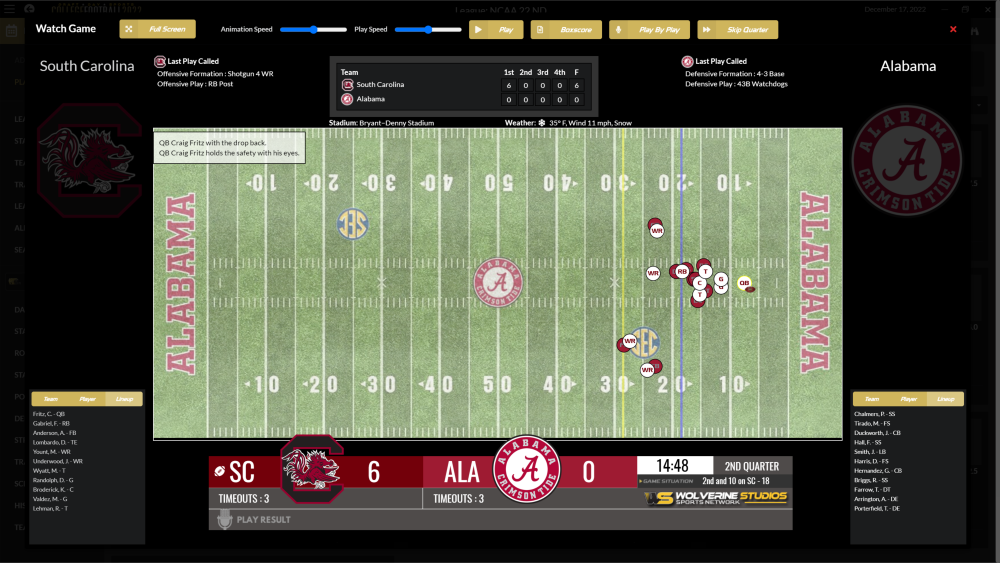 As I progressed through my first season and years after, I noticed that much like in real football, there were tough games against teams that had no right giving the Fighting Irish a game. There was also a flow to games where everything clicked and then sometimes nothing did. The game allows you to change game plans and personnel on the fly. Often that would cause a spark, but not every time, and it was moments of helplessness like this is where I felt completely entrenched in the world of college football. 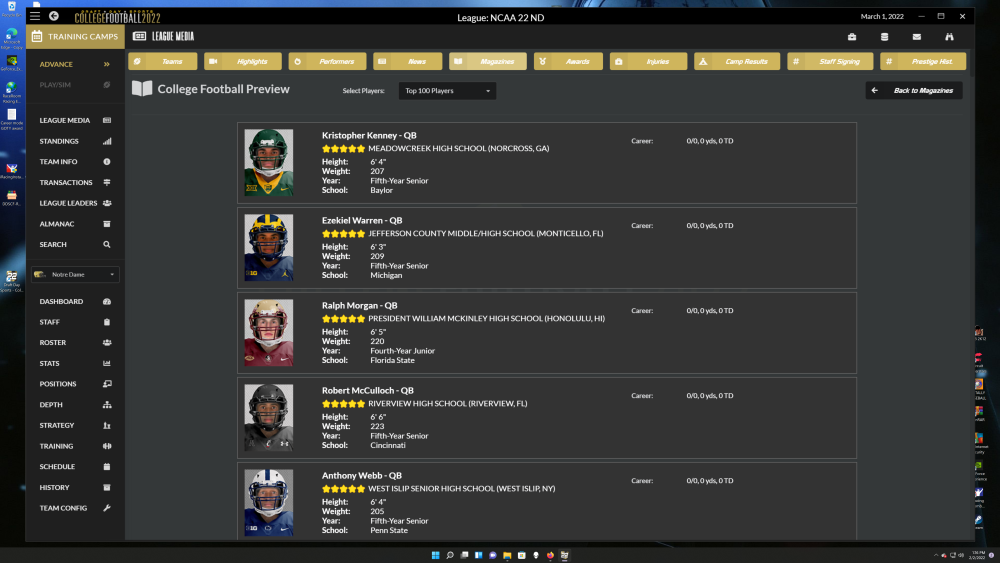 It worked the same way on the defensive side of the ball. Even with a solid scouting effort for the week and a strong defensive game plan, adjustments had to made in-game to account for certain play calls or formations I wasn’t expecting. You can choose to ride this out and hope for the best, or you can try to make adjustments and hope your knowledge of the game and opponent is strong enough to counteract whatever issues you’re facing.

It’s rare to play a sports game where so many little aspects can change the course of a game, but the beauty of this series is just that. I may not have a controller in my hand, but the little nuances that I can control can alter the path of a single drive, quarter, half, or the whole game.

Another huge improvement to the game is the consistency and improvements I saw out of the in-game results, either in my own games or watching a simulated CPU-vs-CPU game. Quarterback play was often overpowered in my eyes in previous titles, and year-end stats seemed too often like Joe Burrow was playing quarterback for about 90-plus teams on any given weekend. 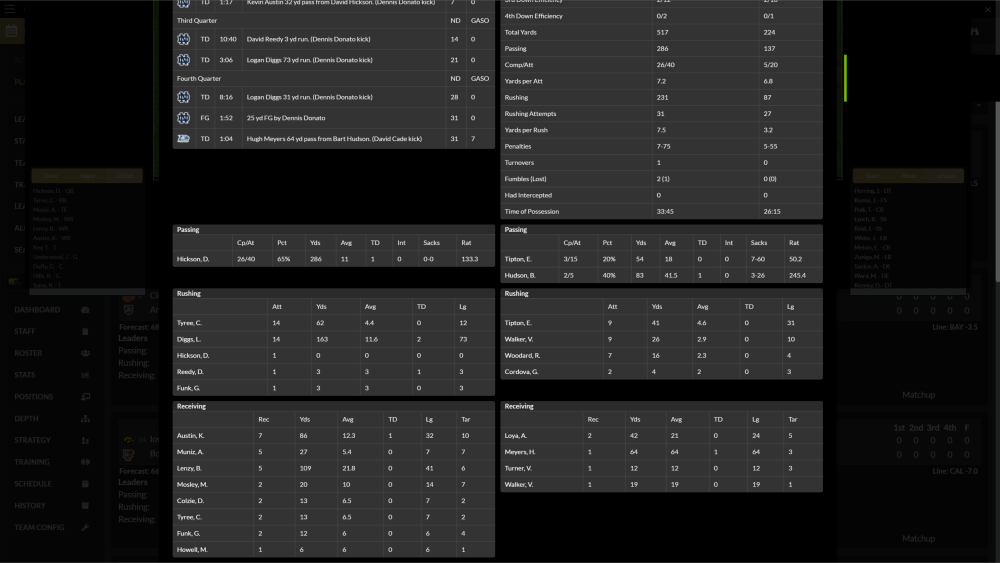 With DDS: CFB ’22 my quarterback had games that ranged from 175 yards up to 400 yards, and everywhere in between. The defense I was playing against had an impact on those numbers as well, which is a good thing as well. There were also games where I could run the ball at will, and other games where I had to drastically change my approach as the opposing defense was seemingly hitting my running back in the backfield on every carry.

I could go on and on about the little details that popped up and helped deliver an authentic experience, but my point is that while the back of the box improvements are not the selling point, the improvements under the hood made a substantial difference for me on the field.

It’s common knowledge that Wolverine Studios does not hold the NCAA/CLC license, and if you weren’t aware of that, now you are. That means when you purchase the game and fire it up initially on your PC, you’re going to see fictional college football teams. 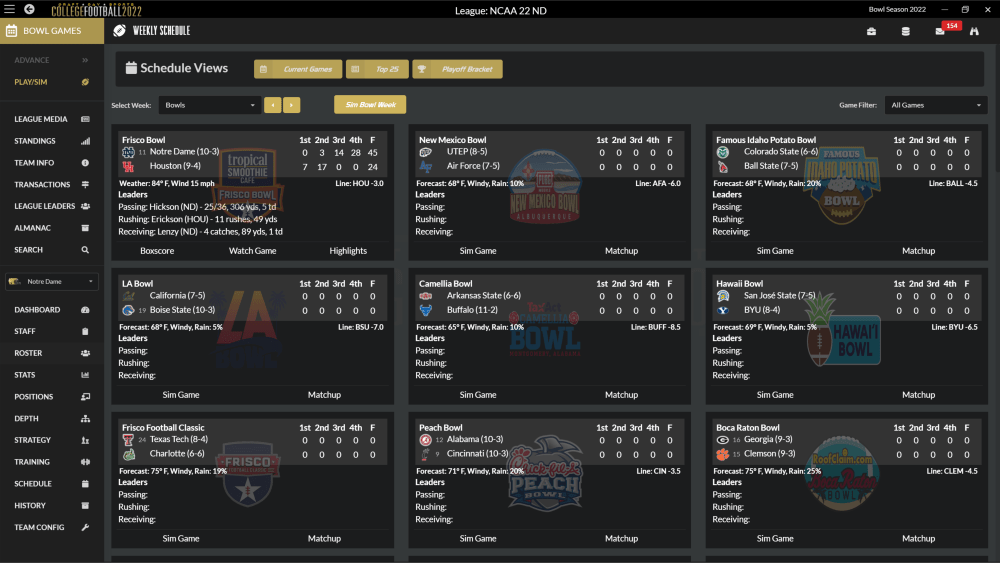 Now, if you enjoy playing in a fictional world of college football and creating your own little ecosystem with backgrounds and storylines, have at it. For me, I am extremely thankful that the game allows itself to be modded for many different types of leagues, but the NCAA one is what I opted for here.

On Wolverine’s very own forums, there is a full NCAA mod (Credit – Slyebelle1) that includes the following.

Just as important, what is not included. 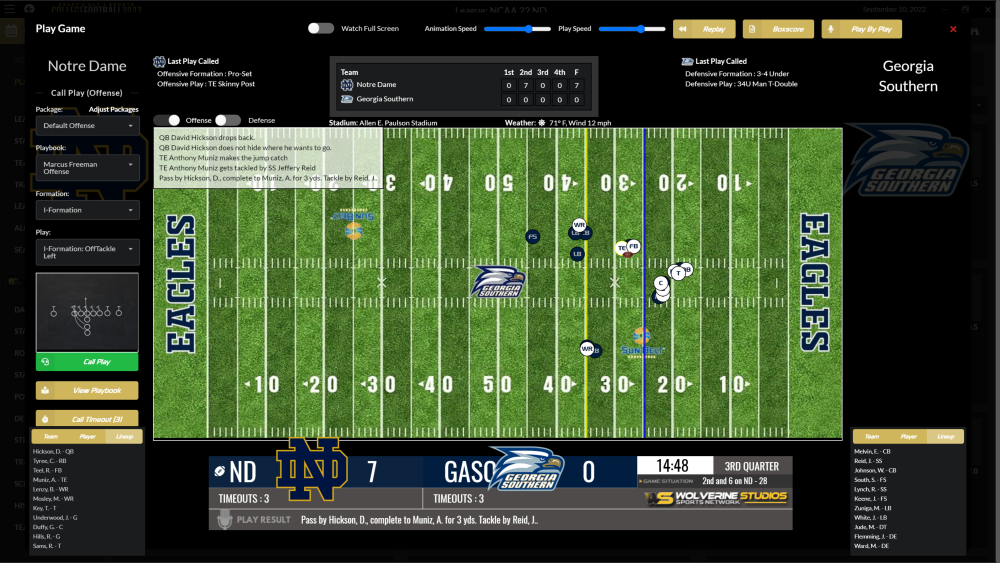 So, with the mod installed, which is extremely easy to do, it takes a great experience and turns it into and even better one. The game also allows for each player to be renamed and stats to be adjusted if you are looking replicate the world of NCAA football down to the tiniest of details.

The amount of work to alter the roster for every team is drastic, but for some who will accept nothing less, the option is there and waiting. Without discounting the game itself in any way, this mod provided by the talented group takes the experience provided by Wolverine Studios to another height, and it’s important to point out the availability of it during the review.

One the many reasons I appreciate this series from Wolverine so much is the depth it contains. That depth can range from in-game stats, the ability to alter rosters, multiple styles of play, or modding the graphics and creating a whole unique world.

When starting out, you have the option to choose a closed experience where you control one team only, and you control that team’s destiny until the board of trustees decides your time has come. You can also choose a “sandbox” where you control the entire league, which means what you say goes and you’re the one doing the firing. 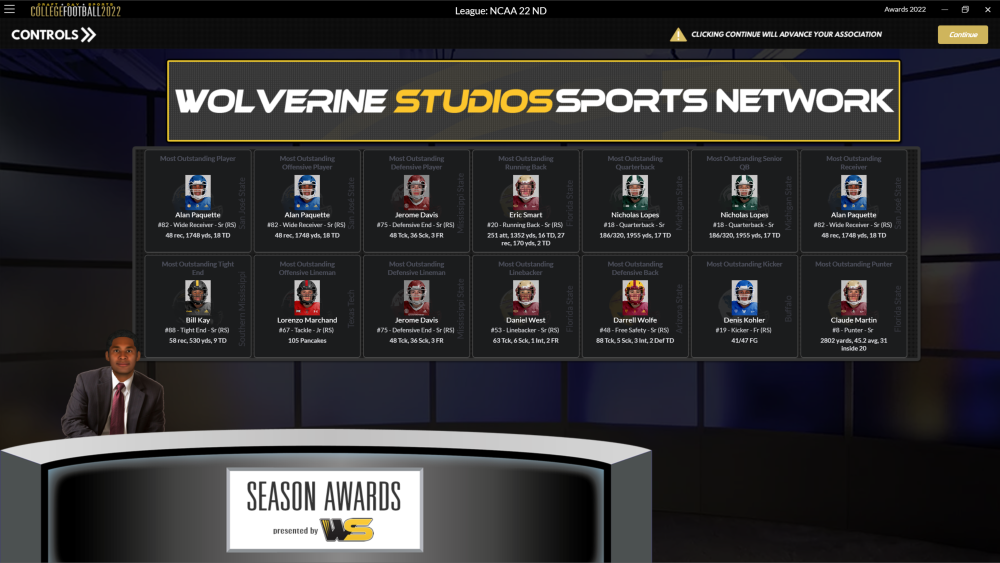 DDS: CFB ’22 also lets you adjust the style of play, the speed of play, and what you want to control (or not control) on offense and defense. The game also allows you to just hit sim and watch week after week go by as you allocate most of the seasonal details to your staff.

I chose to run a closed franchise as the Fighting Irish and controlled everything myself. Between the recruiting, training, visits, game planning, scouting, and so much more, I could fill each week with the deep mundane minutia of the sport or simply rely on staff to help — and this could be adjusted on the fly.

There is no right or wrong way to approach Draft Day Sports: College Football 2022, and chances are your approach will change with each passing season. 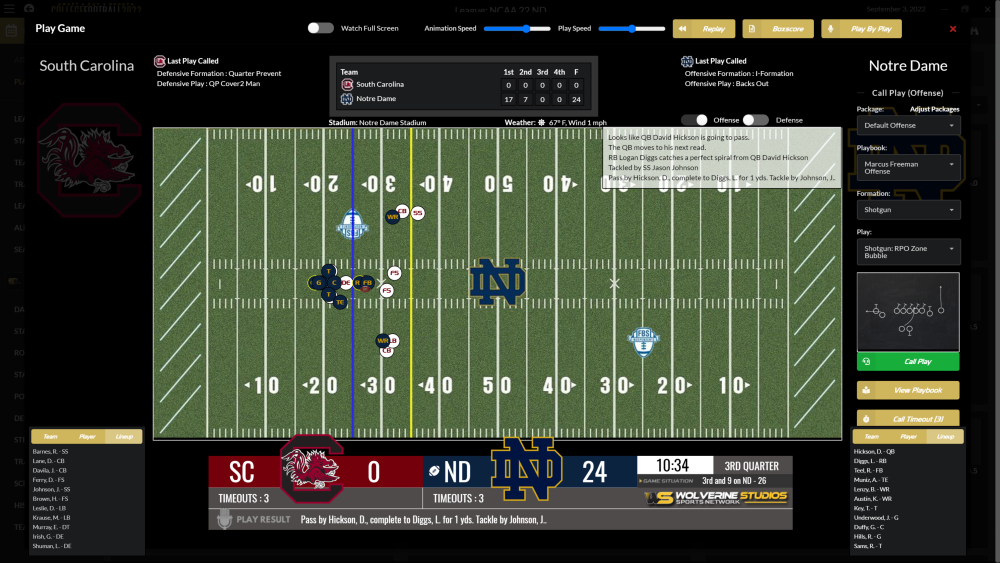 I have mentioned this before and will continue to do so every time I review this title. While the improvements under the hood to the sim engine are quite noticeable, the fact that the game’s on-field action is still represented by a set of 11-on-11 circles navigating their way around the field seems somewhat archaic at this stage of this franchise.

The game offers such an exciting and deep experience that to see the action unfold in this way reduces the immersion in a rather substantial way. Now I am not suggesting that the gameplay needs to displayed or depicted in a Madden-like way, but if somehow the good people at Wolverine could mimic what was done in Pro Strategy Football it would elevate this franchise to the next level.

I have no idea what the future plans are for this college football series, but my hope is that one day we see the on-field action played out in a way that finally adds to the experience in a way that the style in OOTP does.

I also believe the developers should start looking at implementing custom audio slots to coincide with the action that is unfolding on the field. Very much like what the old EA NCAA Football series used to offer in the terms of stadium sounds, allow us to easily upload audio clips that will play after huge defensive plays, penalties, touchdowns, turnovers, and so on. 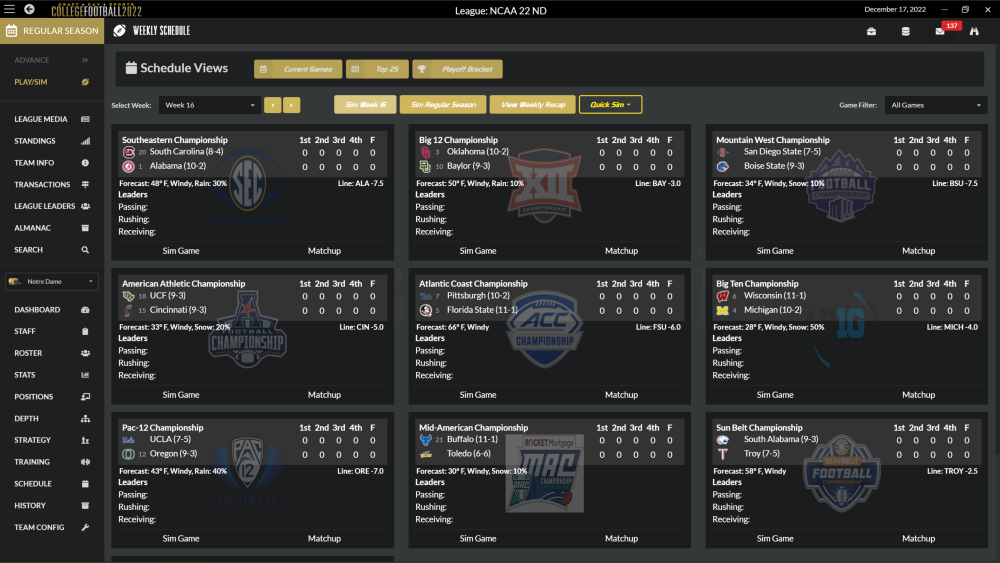 As mentioned before, the improvements and changes to Draft Day Sports: College Football 2022 over its predecessor aren’t overly impressive at first glance. However, after spending multiple hours with this year’s game, I came away extremely impressed. The new inclusions of the fog of war element in recruiting, coaching progressions, conference realignment, and more all make a difference. That said, it’s the improvements under the proverbial hood, that when combined with the new elements, make for a solid experience with the newest release.

You could run a 20-year dynasty with one team and start over with another team and have a completely new experience, and that is due to the depth and longevity of this title. When you add in the ability to mod the game and create real rosters, it’s easy to say this is another solid entry in the sports management portfolio for Wolverine Studios.