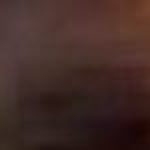 The Dakar Desert Classic is a chaotic and grueling multi-class racing event that takes up to two weeks to complete and covers thousands of miles. While I have never been privy to race in this event in Saudi Arabia, I know others that have in real life, and the one constant is the race’s actual mantra of “go as slow as possible and as fast as needed.” The race consists of multiple classes of vehicles, including five categories. Motorbikes, quads, cars (T1/T2), lightweight vehicles (T3/T4), and trucks (T5). It is broken up into categories much like the 24 hours of Le Mans or 24 hours of Daytona, where classes race against the same style of vehicle, and not all of them in an actual point-to-point race where the first to finish wins. All this is to say that when it comes to my Dakar Desert Rally review, the event itself is a big part of the game.

Saber Interactive has set out to capture the magic, grind, and stunning locales this race provides to the drivers, spectators, and camera crews. Trying to replicate an event of this size and nature is a tough challenge. Still, the ultimate goal for Saber is to deliver an accessible but realistic title that lets gamers experience the thrills and adrenaline-fueled rush that comes with participating in the Classic on every level.

I don’t usually lead with visuals as a positive, and I would typically take that as a bad sign for the rest of the game. Thankfully, that is not the case with Dakar Desert Rally as the gameplay and driving models are highly entertaining. 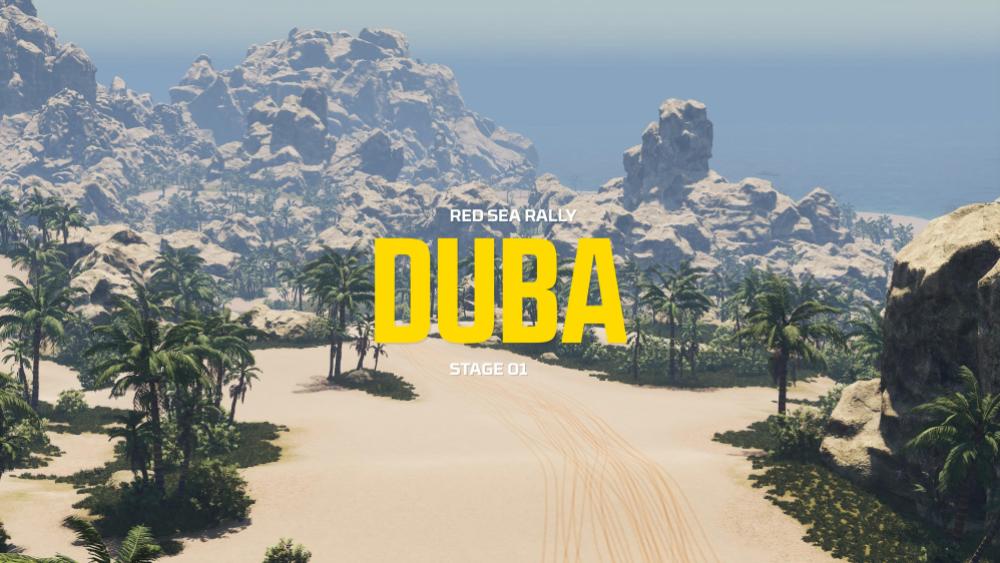 I did this because the landscape and world that Saber has created really makes up the core reason why the game is fun and interesting. The goal was to recreate the same type of environment the real drivers in the Dakar Classic have to deal with, and they have done an excellent job of doing just that. 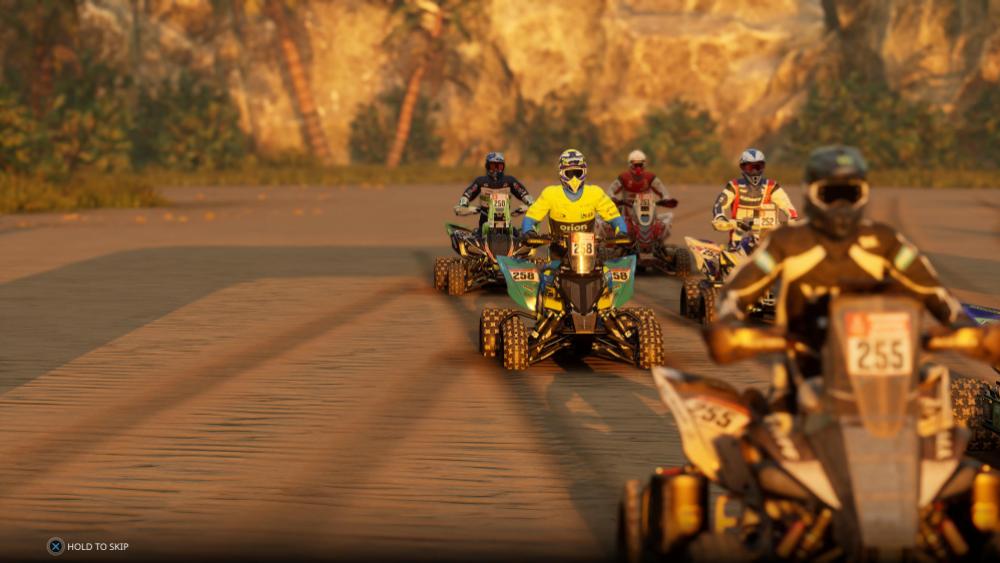 The way the sand hills roll, the water bogs you down, the lighting and rain change the terrain and visibility, and how snow forces you to completely change your approach all add a lot here. When you add in how the vehicles interact with all of the terrain and elements of weather, it’s then that you realize how much all of the rest of the game elements depend on the environment as the foundation of gameplay.

It may be a bit hard to grasp why visual fidelity is so vital to a game like this, but once you sit down with a controller in your hands and see how it is the binding factor at the heart of this game, it becomes so readily evident.

When dealing with a title that is officially licensed and a grueling force of endurance, trying to capture the authenticity of the sport in real life while making the game accessible for all can be challenging. But Saber has done a commendable job and found a nice balance by creating a gameplay model that is fun, challenging, and frustrating. 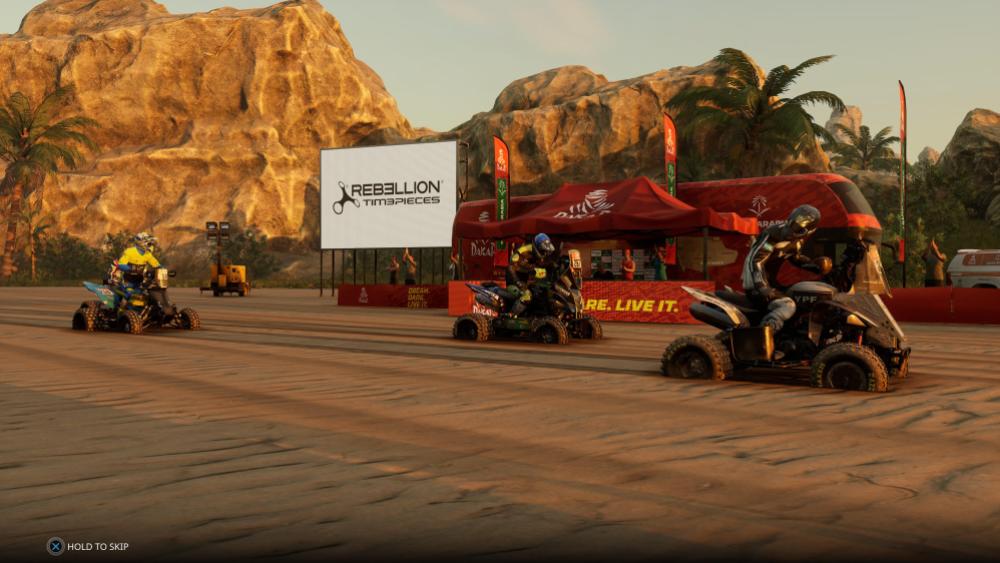 Maybe the use of frustrating seems like an odd choice when offering praise, but that’s precisely how a game that depicts one of the most difficult challenges in the racing world should be. Considering the rolling dunes of the Arabian gulf, the mountainous terrain, and the dense forest in the outlying areas of Saudi Arabia on the Western Asian Arabian peninsula, participating in this race should never be an easy endeavor.

That’s precisely what the developers have created in Dakar. A beautiful yet dangerous world that will lull you to sleep with its fantastic landscape and horizon, but then it will obliterate your hopes and dreams with a tiny mistake. Traversing over the soft hills takes skill. Navigating the rock-laden hills is tough. Safely keeping your vehicle out of deep waters and the thick forest is complex.

You feel all this with the controller in your hands, and it takes time to appreciate the combination of a solid driving model, strong AI, beautiful-looking scenery, and responsive gameplay. Still, when it hits, it offers a unique experience that is addictive in a way I never thought it could be. 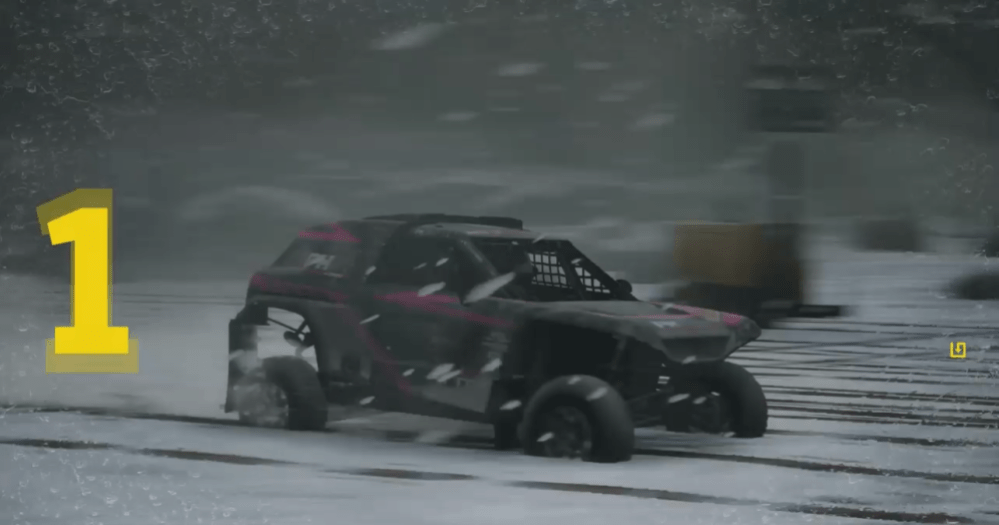 In a game where the most prominent opponent is one’s ability to stay focused, make timely decisions, and persevere, the AI opponents are still critical. The AI opponents in Dakar Desert Rally are all over the place, which is excellent.

Regardless of the multi-class style racing, every AI is aggressive but has a structure to their approach — so much so that I often witnessed AI drivers taking small shortcuts and taking advantage of the terrain and obstacles to maintain their position or making it highly difficult to take over and pass them. When approaching AI drivers in Dakar Desert Rally, I encountered racers that would grind with me but were respectful. In contrast, others reacted as if this was the next iteration of the Motorstorm series and would purposely try to end my day with a few sneaky and abusive maneuvers that inevitably ended up with me head-first into a mountainside or flipping over down a hill.

Although the AI can be erratic and aggressive at times, the one caveat to the remark is rarely, if ever, does an opponent-driven vehicle outside of the class you are driving ever make an effort to interact with you unless you initiate the contact with them. The AI’s interaction with me was authentic and enjoyable, and the same goes for interactions among themselves. 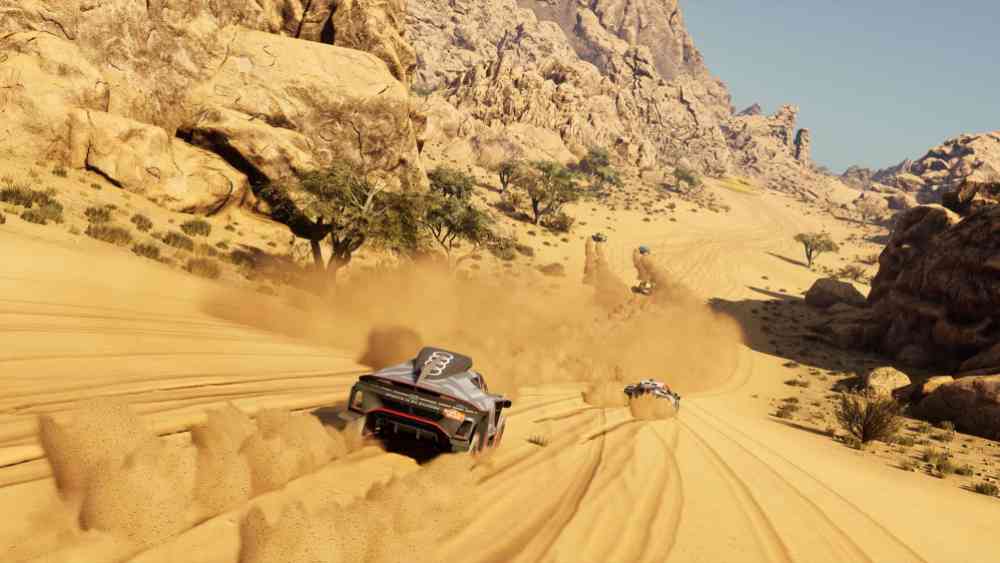 The AI will pursue different angles and approaches to navigate the treacherous terrain, and sometimes it is glorious to see them succeed and just as exciting to see them fail. The AI opponents in Dakar are not perfect, but is that not what we want from the AI?

If you haven’t played the game, my listing waypoints as a negative probably doesn’t make much sense at this juncture. A waypoint is a simple on-screen indicator that shows you throughout the stage of each race where your destination is located. The waypoint is presented in a rotating circular fashion, almost like a yellow tornado appearing on-screen to help you find your way. The indicator itself is fine and easily visible, which is excellent. 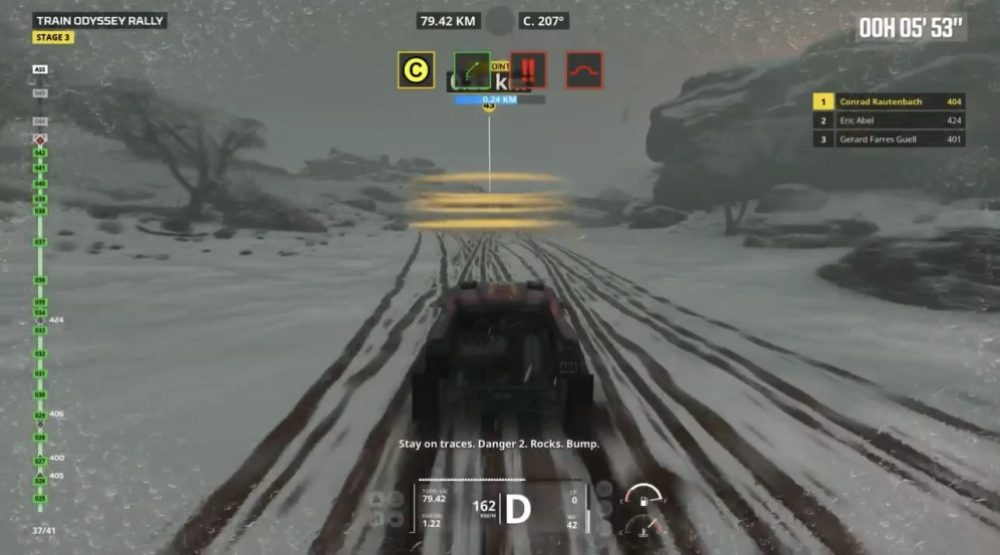 The problem is that it is so dense and large in stature that it encumbers your ability to see through it, and in doing so, restricts any obstacles located just after it. This would not be an issue in some racing titles, but in Dakar Desert Rally it can be downright disastrous. Driving through a waypoint only to be met with another vehicle or rock formation became all too familiar as my time with the game went deeper. While not a game killer, it is impactful and hopefully can be patched to lessen its density soon.

In Dakar Desert Rally, you have three ways to play the game: exhibition, online, and the actual rally itself. While online offers a decent set of options, and the tentpole mode of the rally is a lengthy journey, I never felt like a simple exhibition race would ever be something that would interest me once the rally was completed.

I will admit that competing in the Dakar is a lengthy endeavor and one that could take some a week or two to complete — or longer depending on the amount of dedication you show from the start. Still, once you are finished, there isn’t much proverbial meat left on the bone once the primary mode is completed. 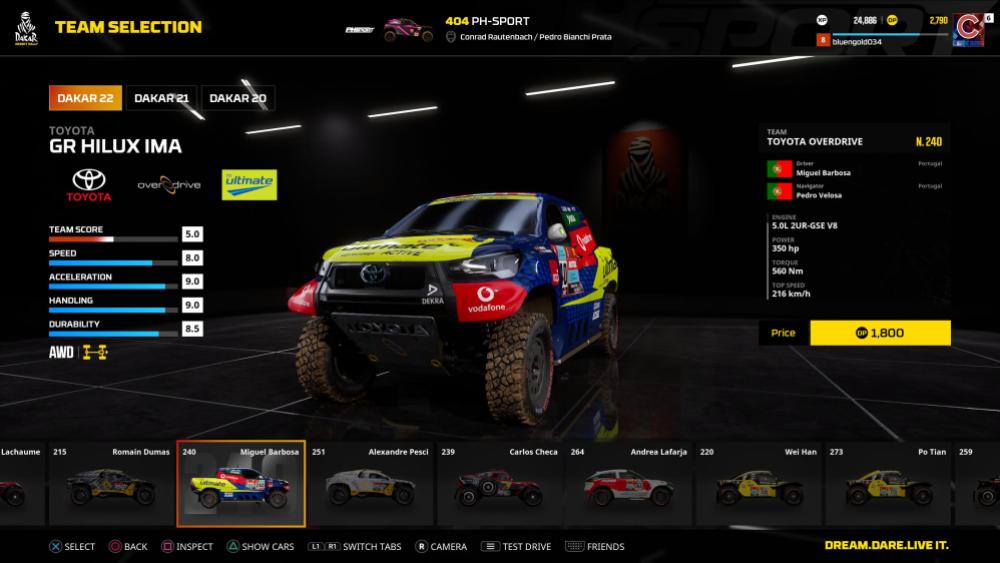 Many will find a ton of enjoyment online, but otherwise this lack of depth could be an issue for those looking for an experience that will have you strapped for a lengthy period. Even with the amazingly detailed locations and the variances with each stage, both in terms of terrain and weather, it does become familiar after spending some time with the game.

Even with some depth problems, some quirky issues, and a racing model that leans more toward an arcade experience, there is much fun and excitement inside Dakar Desert Rally by Saber. Each race stage is lengthy and formidable, and some stages had me ready to throw my controller, yet I was always ready to come back for more. 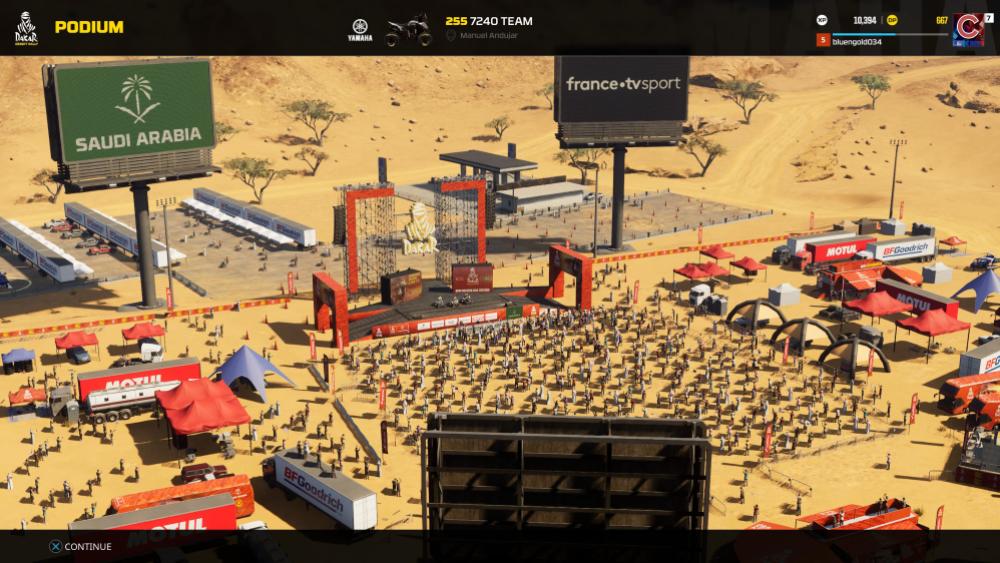 Dakar Desert Rally impressed me at every turn, jump, and twist from a visuals perspective. The AI is fun and unpredictable and will give you a run for your money on the right difficulty. I genuinely appreciated what the AI had to offer in Dakar Desert Rally, especially with the title being slightly shallow in terms of alternate offerings.