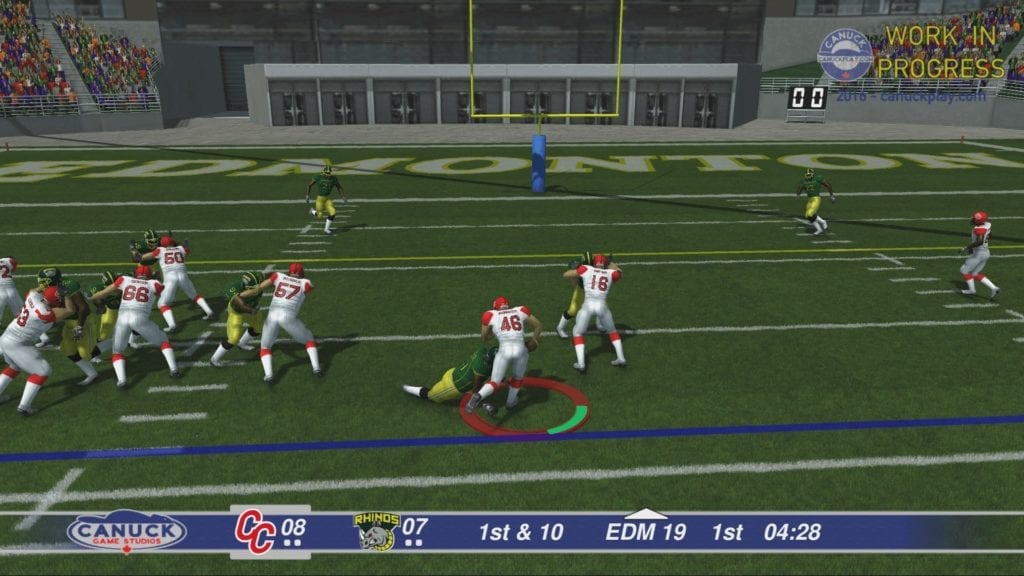 Canadian Football 2017 is scheduled to arrive in June for Xbox One for around $15. PS4 and PC release is scheduled at a later date. During a recent interview with 3DownNation, Canuck Play confirmed the game will only come with a quick play mode. Career mode and other features would require more development time.

The game will feature 9 teams, but unfortunately, will not have the CFL license, which means the game will not feature official CFL teams, stadiums, player names, etc. PC players will be able to edit those details, but Xbox One and PlayStation 4 players will not.

Check out the gameplay section of the interview below and read the full interview here.

3DownNation: Tell me a bit more about the gameplay itself.

Canuck Play: Passing is touched based. Like other football games, each receiver is assigned a button and the longer you hold the button down, the harder the throw to that receiver will be. When you play the game, you’ll have the option to tap a button to lob a pass and put more air under it (for a fly route), or press and hold the button for a bullet pass (for a slant over the middle).

On-field players have basic juke moves like side steps and spins and it’s worth mentioning that players become fatigued the more you use them. There’s actually a fatigue meter under the ball carrier that indicates how tired that player is. You can run the ball with the same player several times in a row, but you’re going to wear him out and he’ll start to slow down and eventually become more likely to fumble the ball. Our fatigue meter adds an extra layer of strategy to the game as you’ll really need to spread the ball around.

Kicking is fairly traditional, aim with the right thumb-stick, then pull back and push forward with the left one to put the ball in motion. Given the short play clock, you get very little time to aim and kick. As for punting, we have included the uniquely Canadian quirk that allows a kick returner to punt the ball back out of the end zone to avoid giving up a rouge. There’s also the possibility to recover your punts with an onside kick, another feature that you won’t find in other football titles.

I also want to emphasize that Canuck Play has aimed to create a game that anyone can pick up and enjoy. Some titles (like Madden) are simply too intimidating to a lot of people. That’s why we’ve put a lot of effort into simplifying things and making our game extremely accessible by allowing players do do things such as adjusting the play clock (to give you more time to pick plays), to turn off the waggle (so that the ball is always automatically snapped at the right time) and so on.