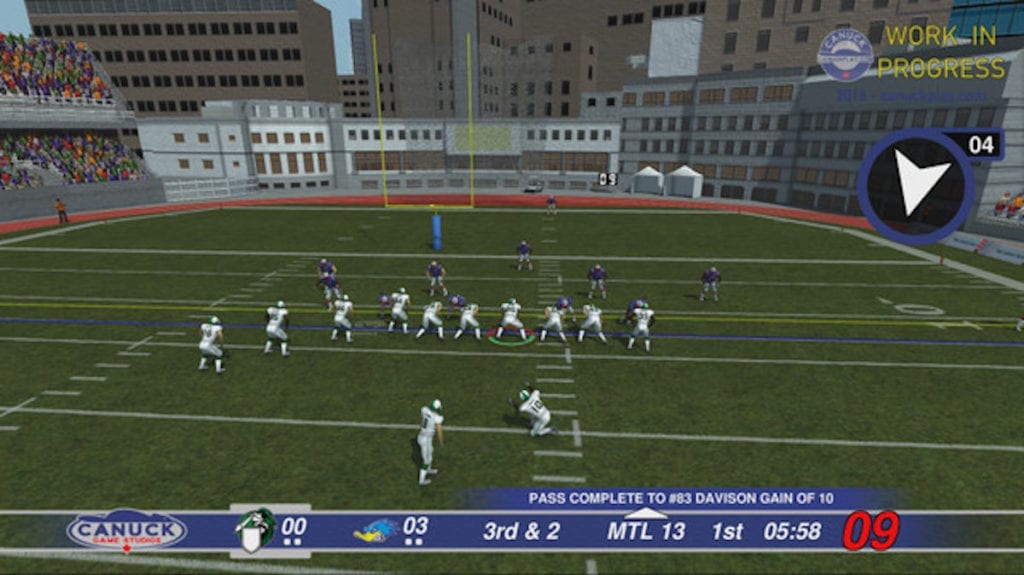 Now that Madden has arrived, are you disappointed that, at its core, it’s pretty much the same game as last year? Do you wish Madden would shake things up and add an extra defender? Maybe make things more difficult by removing a down or getting rid of the fair catch? If so, maybe Canadian Football 2017 is for you!

Canadian Football 2017 was recently released on Steam and is an independently developed game that aims to replicate the style of play found in the CFL. For those unfamiliar, that means it includes all of the changes I lightheartedly mentioned above: 12 vs 12, 3 downs, larger field, no fair catches, etc. And in that regard, the game does a good job.

However, nearly everywhere else, Canadian Football 2017 shows its indy roots. Graphically, Canadian Football 2017 looks like a solid Xbox 360 title. Player models are decent enough and animations, though stiff, don’t drive one to distraction. While the games are seemingly only played during the day, the lighting effects result in something that easily resembles a bright afternoon. Each of the nine teams has a unique stadium; they aren’t very detailed but do effectively give the various cities some degree of personality.

However, there is a dearth of personality in the rest of the game. The limited TV-style screen elements do a nice job relaying results of a play, but lack any flash or style. There is an announcer, but he is more like a stadium public address guy than a true play-by-play voice. Beyond some crowd noise and some on-field hits, this game is relatively quiet.

Finally, while the game includes the nine real-life cities that make up the CFL, there are no real logos or team names. However, the game is able to be modded to include those licensed elements. Again, the unique aspects of the CFL rule set are included, and make the actual on-field play a novel experience. If you are used to playing Madden, reading a defense with an extra man can be challenging at first (of course, you have an additional offensive player too). Its neat timing snaps as motioned receivers near the line of scrimmage. And doing all of this with only three downs makes things extra interesting.

However, the controls leave a lot to be desired. First, they take a while to get used to, as the controls are mapped very differently than any other football game I’ve played. Odd choices, like Y being used to call timeouts or right trigger to tackle, just make learning to play a bit of a struggle. Thankfully, the help screens are readily available in-game. Once I mastered the control layout, my attention was drawn to floaty players who move without weight or momentum. Juke moves are mapped to the triggers, and their animations simply take too long in a world where Madden offers nearly instantaneous control. Sprint doesn’t seem to do enough, especially on offense where getting around the edge on an outside run can prove frustrating. All of this creates a game where successful plays feel more like luck than skillful timing and execution.

Making matters worse is an inconsistent AI. My own blockers and linemen occasionally took logical routes to set up lanes; meanwhile, my receivers seem to amble around with no sense of urgency or intent to find space. While playing defense, I watched a DB literally walking away from the intended receiver, as if the play was over. I also witnessed the CPU QB somehow find a man in the end zone, despite the fact the receiver was surrounded by three defensive players and facing the wrong way.

In general, it’s fun to play football under a set of rules that aren’t common in video games; however, the shoddy gameplay erodes that novelty pretty quickly. If you do like the gameplay, there’s really only one way to play: one-off exhibition games. Yes, that means there is no season or franchise, no player editing or roster management. Pick a team and play…then do it again.

The only thing that saves Canadian Football 2017 here is a basic play editor that allows you to design plays for use in the exhibition games. It’s functional, but not that intuitive; and, without some kind of long-term mode, feels pretty superficial. Independent developers, like Canuck Play Inc., play an important role in the video game industry. They make games like Canadian Football 2017 — a title with limited appeal — a reality. If you’ve been dying to play a CFL-like football game, you now have that opportunity.

Unfortunately, this one isn’t that good. Beyond the limited features and merely passable gameplay, I encountered numerous bugs and crashes. One left me unable to call plays or pause the game; I had to burn timeouts to continue playing. Often the game would fail to launch.

Even at a bargain price, it’s hard to recommend Canadian Football 2017, with two exceptions: you really want to play a Canadian football game, or you view your purchase as a donation to help a small developer. Otherwise, this game is too dated, too clunky and too limited to offer much enjoyment.

Canadian Football 2017 Scheduled to Arrive in June - Quick Play Only, No CFL License