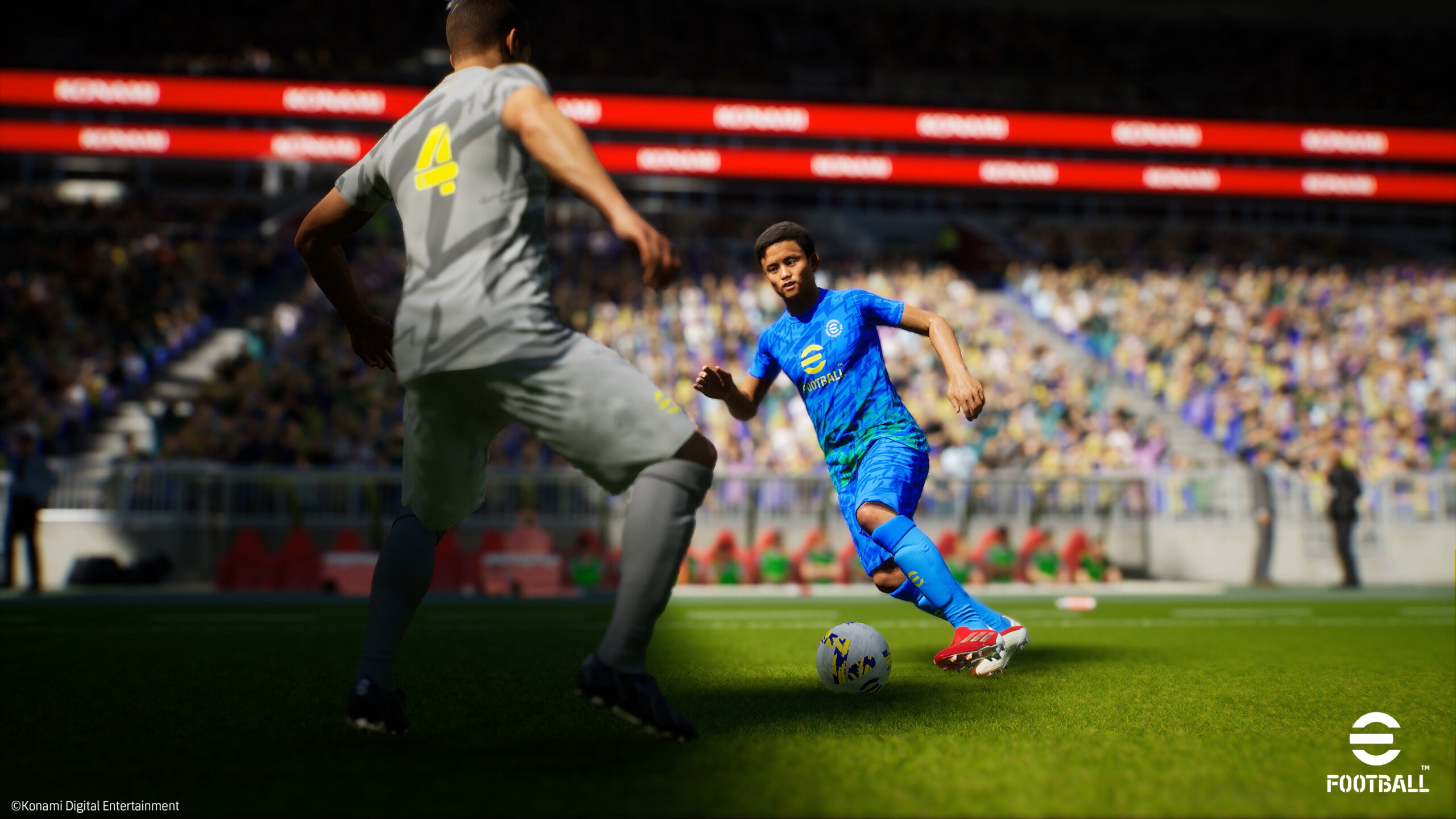 It’s a busy time of the year for soccer enthusiasts. Domestic leagues across the globe have kicked off, albeit they are on a brief hiatus for World Cup Qualifiers. The transfer window ceremoniously closed this past week only increasing excitement levels for gamers to get their hands on a new soccer title. While some of us have taken a preemptive bite from the FIFA 22 apple, eFootball has been slowly releasing information leading up to its release. We teased some of the information yesterday here so naturally it’s time to dive in!

We Have A Release Date

Say goodbye to “Early Autumn” and hello to September 30! In the past, Konami had positioned itself to release the full game ahead of FIFA, which usually releases in early October. Even with the delays and uncertainty surrounding eFootball, it’s still slated to release ahead of FIFA 22, which releases on October 1. We’ll get into whether or not September 30 is the full release later, but it’s also worth noting how Konami casually inserted “2022” into the official title.

This is probably insignificant in the grand scheme of things but many of us, including myself, thought the title would remain “eFootball” and any update, whether it be annually or monthly, would simply just be a normal update and not tied to a specific year. Again, it’s probably insignificant in the long run, but a title change this late in the game is par the course for Konami.

Strange Omission From The Demo Teams Available At Launch

We know the following teams will be included on September 30:

This is a good mix of partner clubs with strong sides like Bayern Munich mixed with a little South American flair in Flamengo, but there’s one striking omission. Cover star Lionel Messi’s new club, Paris Saint Germain (PSG), is not included meaning you won’t be able to play as Messi. PSG has historically been been included in both FIFA & PES, and Konami states that there are over 600 licensed clubs, which is a little confusing considering that the majority of the English and German clubs were not licensed in eFootball 2021 Season Update. So does this mean that they’ll be in eFootball 2022? Sadly, we don’t know yet.

Konami has not shied away from its intention to make eFootball a game that is based on player vs. player interactions, so it’s at least comforting that offline matches versus the AI are still a thing. I’m sure it will get a little boring playing with the same nine clubs for, well, we don’t know exactly how long because Konami doesn’t say.

Cross-Gen Will Be Available On September 30

While I still harbor doubts that Konami will be able to pull off full cross-play, the folks in Japan have committed to have at least cross-gen play, which if it works, will be a huge one-up on EA’s FIFA series, which still doesn’t have that capability despite the community desperately calling for it. Connecting players on their respective systems will be a huge win if Konami pulls it off as the split between folks who have next and last-gen systems is fairly large — meaning popular modes like Ultimate Team are limited within their respective consoles. Despite this, there’s still a lack of clarity around what will be available to PC users at launch. Will they be able to play folks on the PlayStation or Xbox? I guess we’ll find out soon.

There’s Something Called A “Creative Team”

Don Draper and Roger Sterling are rolling over in their collective graves at the lack of originality behind the name Creative Team. Despite the unoriginal name, Creative Team appears to be a MyClub-like mode where you create your own team from the aforementioned 600 licensed clubs and compete against other humans for in-game rewards and incentives. 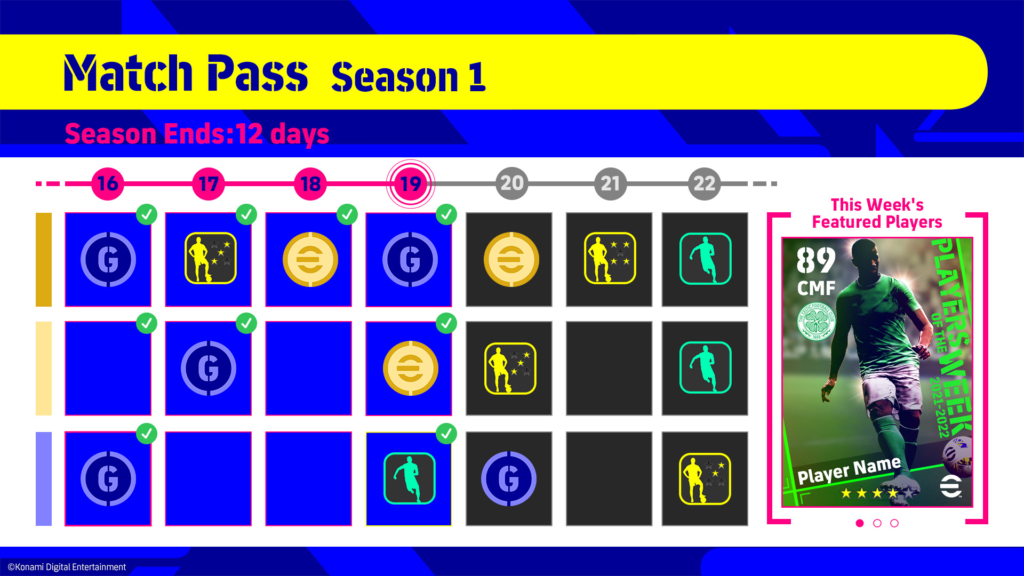 Well, we all knew they were coming so let’s not act surprised, especially considering the free price point. What we don’t know is exactly when the new Match Pass system will drop. In addition to the rewards you accrue after playing matches, there’s an “Advantage Match Pass” that you can purchase to get more items, which will probably put you at an advantage over those folks who stick to the match grind as their way of getting ahead.

This eFootball nugget comes courtesy of The Loadout who state that individual player tactics will not be available at launch. Does that mean there are going to be individual player tactics like there are in FIFA? Before the eFootball news released, tactics were one area I was looking for in terms of improvement by Konami. I was and still am a big proponent of tactics, but often I felt that many caused issues under the hood as they seemed to override each other and that left your players confused.

Now that we know team styles have been streamlined, I can’t help but wonder what these individual player tactics will actually be. Considering the September 30 launch is basically a demo, it’s no surprise that tactics won’t be included. However, the uncertainty about when they will be added doesn’t leave a good taste in my mouth either.

There Will Be Multiple Camera Options

In the same article from The Loadout, Konami has stated:

“Stadium camera, Dynamic Wide camera, and others that were included in previous games will be available”

I wasn’t a big fan of the zoom camera that we saw in the Online Performance Test, but as long as there are options then there should be a camera to suit everyone’s liking. 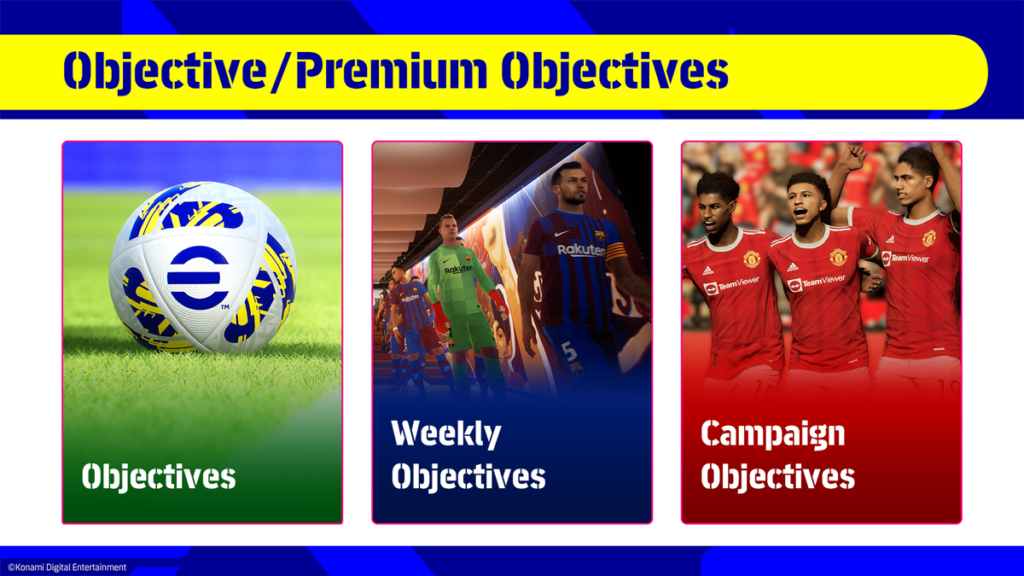 From the looks of Konami’s eFootball website, it looks like there will be multiple competitions (Objectives) to participate in where you can earn rewards with “Premium Objectives” unlocked through, you guessed it, virtual currency:

From the looks of things, eFootball Points are earned through in-game playthroughs at no cost to the player. eFootball Coins will need to be purchased with real currency. It’s uncertain at this point how you earn “GP” but my guess is that you might need to use real currency, possibly at a discounted price to the eFootball Coins. 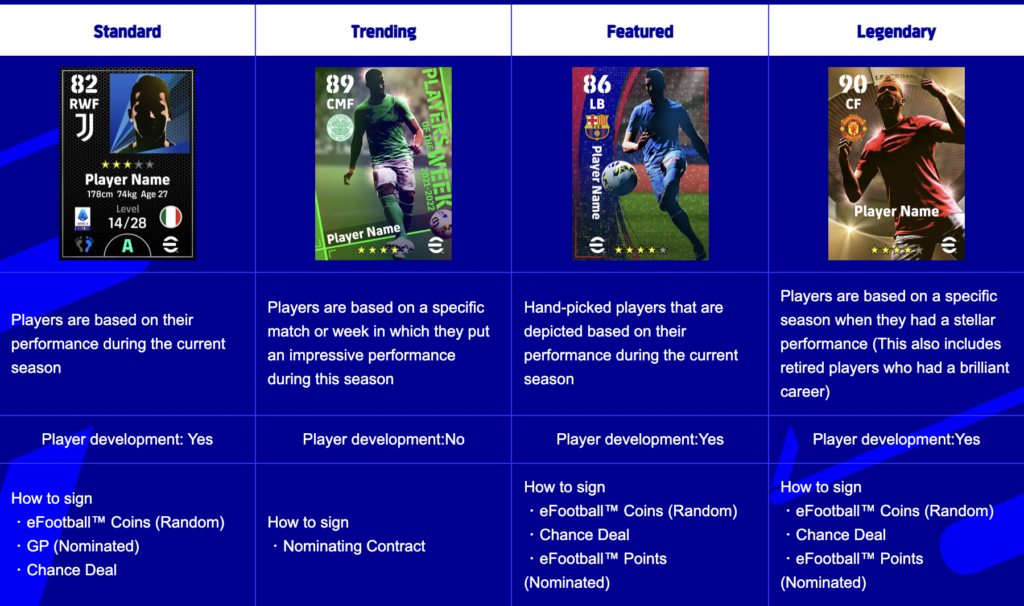 One of the areas where Konami has been fairly consistent is updating player ratings to reflect real-life performances. What used to be called “Live Data” looks to still be included in the game, but perhaps taken behind the scenes with the exception of Legendary Players who will take on ratings from a specific season from the history books. This is one area where Konami has had a huge leg up on FIFA. While FIFA does have its fair share of legends (shout out to Deuce who’s in FIFA FUT this year!), they often feel generic. PES’ Legends just feel different, a testament to Konami’s excellent Player ID system.

It’s interesting that you can develop Legendary Players, albeit I see this as something that could be abused by the highly competitive players. What’s not interesting is how three of the four player types have eFootball Coins as a way of signing those players, directly speaking to the larger community’s sense that this free model is essentially a cash grab aimed at nickel and diming us into spending more than the usual $60 we spend on a regular PES title.

There Are Five Match Types

Coming at a later date, these match types look similar to what we’ve seen in the past with PES titles. “eFootball Creative League” looks like a rebrand of MyClub, and they even threw a bone to us offline players with the Tour Events. There’s still no mention of a Master League-like mode, but Konami has assured us that there will be some sort of Career Mode available, albeit most likely in 2022.

Besides doubling down on the seizure-inducing yellow and blue color scheme, Konami is getting quite good at spoon-feeding us information while simultaneously leaving us with even more questions. There’s still no updated roadmap, no information about Edit Mode, or any concrete messaging regarding the licenses, especially considering that it announced partner clubs such as Atalanta just this past summer. There’s a lot of uncertainty about the future of this franchise, and Konami hasn’t done a good at easing our fears. Better PR would have gone a long way towards helping to clarify some of these questions, but if the past is any indication, I wouldn’t hold my breath for better, concise information.

At this point, the future — both immediate and long term — look bleak for the series that we grew to love over the years. Considering that Konami essentially took a year off to prepare, it begs the question of just what exactly Konami was doing these past two years as all the signs point to eFootball not being ready, despite the rush to beat FIFA when it comes to the official release date. With a few new football games on the horizon, the pressure on Konami to deliver is now more important than ever.

How do you feel about the latest information from Konami regarding eFootball? Cause for concern or ehhhh it’s free so why not give it a go?