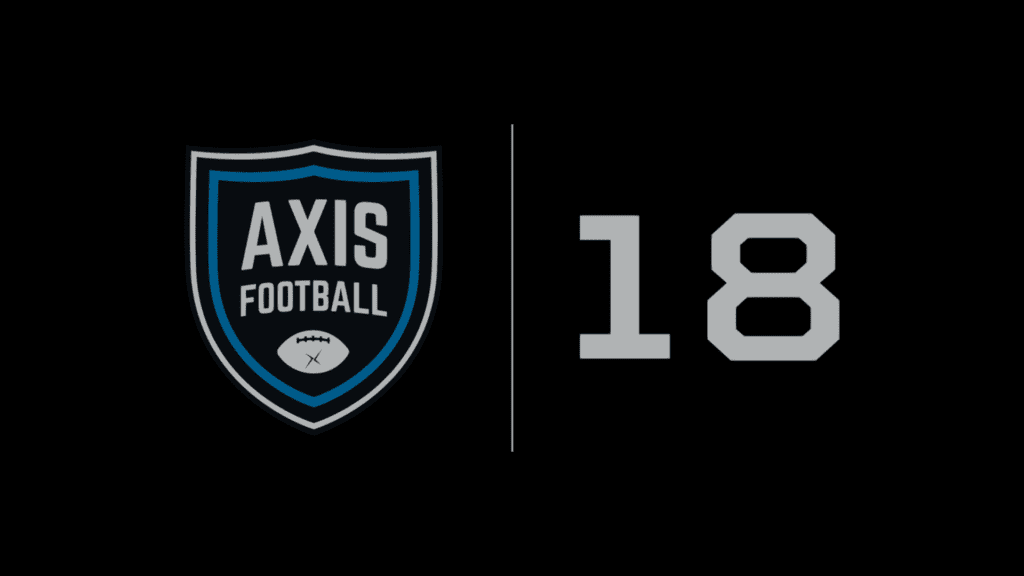 There’s a new gridiron game out on Steam with the release of Axis Football ‘18. There is one thing I’d like to get out of the way: This isn’t Madden. It’s not supposed to be, either. Axis Football ‘18 is developed by indie studio Axis Games and they aren’t out to become a Madden killer.

What they have done instead, is make a fun if flawed take on football that features a deep franchise mode and the ability to customize every team and every player. Keeping that in mind, this affordable title does a few things very well and shows promise for future games to iterate on.

Let’s take a look at what Axis Football ‘18 brings to the playing field.

Offense is definitely the better controlling side of the ball. Playcalling is laid out in the very familiar three play options with the ability to choose plays from formations, concepts, or even using an Ask Madden type style of playcalling. 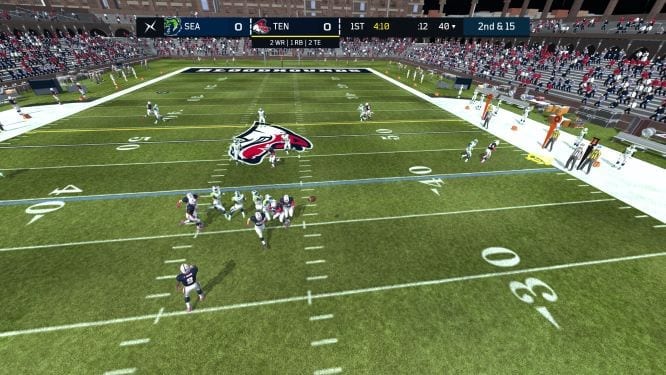 Running makes the most sense. You’re able to hit the hole, use juke moves, or try and take it to the edge of the defense to gain extra yards. Run blocking is mostly fine, though on most run plays, you’ll see a defender get a free run at the running back. Often times you can make that guy miss, but it’s apparent that run blocking logic is fairly rudimentary.

Passing is a bit more problematic. Wide Receivers almost never look open and if you decide to throw a lob pass, prepare to have the defense quickly surround the pass catcher. The pass animations are far too floaty and you’ll quickly get used to the feeling that every pass will be picked. Bullet passes are a bit better but even then there seems to be problems getting receivers wide open. It is still functional, but could use some work. 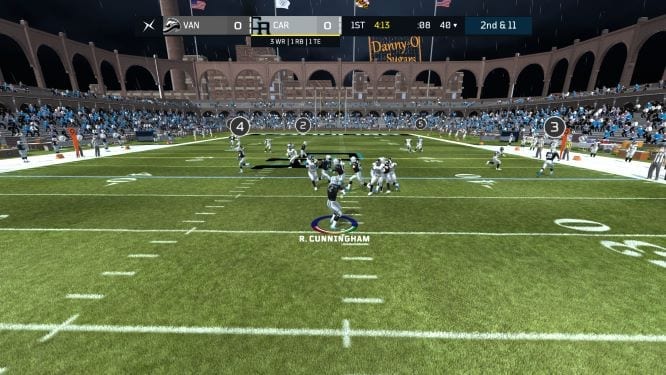 Defense is interesting. On the one hand, you have pass rush moves and can get after the QB with a fair amount of consistency. On the other hand, tackling is as simple as running into the ball carrier. There isn’t much agency given to the player as a defender.

Playing into the secondary also proves difficult as your defender will often drop interceptions simply because the passing game allows for defenders to constantly be so close. It’s not that it’s not fun, I just feel like there is still a lot for the Axis team to add to the game in terms of animations and controls that would improve the experience overall.

Here is where Axis Football ‘18 shines. Franchise mode is actually deeper than I expected it to be. You start off by choosing your team from 1 of 3 tiers. As you go up in tier, the team you can choose gets stronger. This is a good division for different styles of franchise runners. You can rebuild a bad team, or fill out a good team in terms of winning a championship. 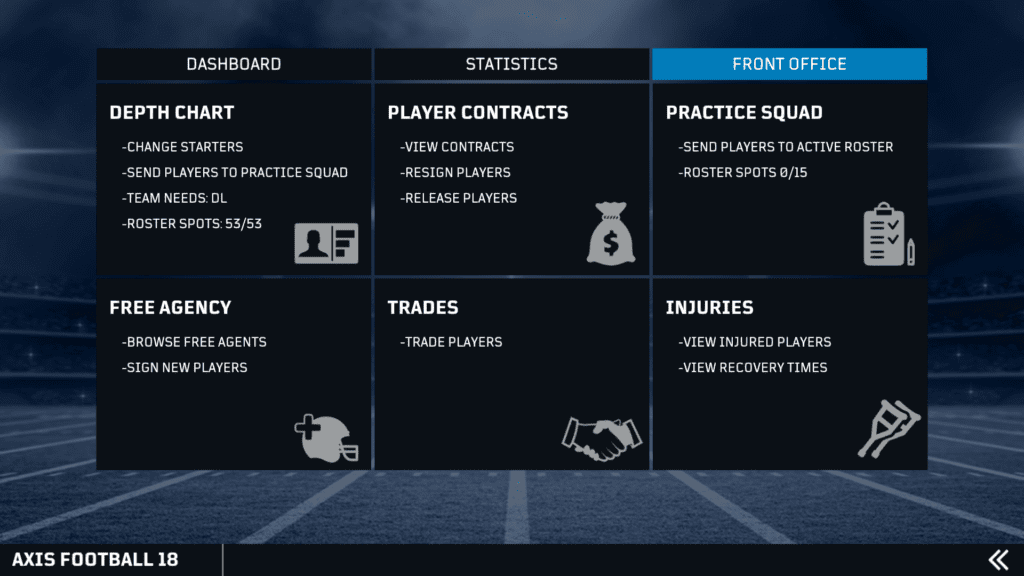 Every aspect of the franchise is customizable. You can edit teams, players, attributes, contracts, and game plans. You can choose to mod real life teams into the game or shape a completely original team to any look you would like. While not quite as deep as an Out Of The Park game, there is plenty here to keep would be commissioners happy. 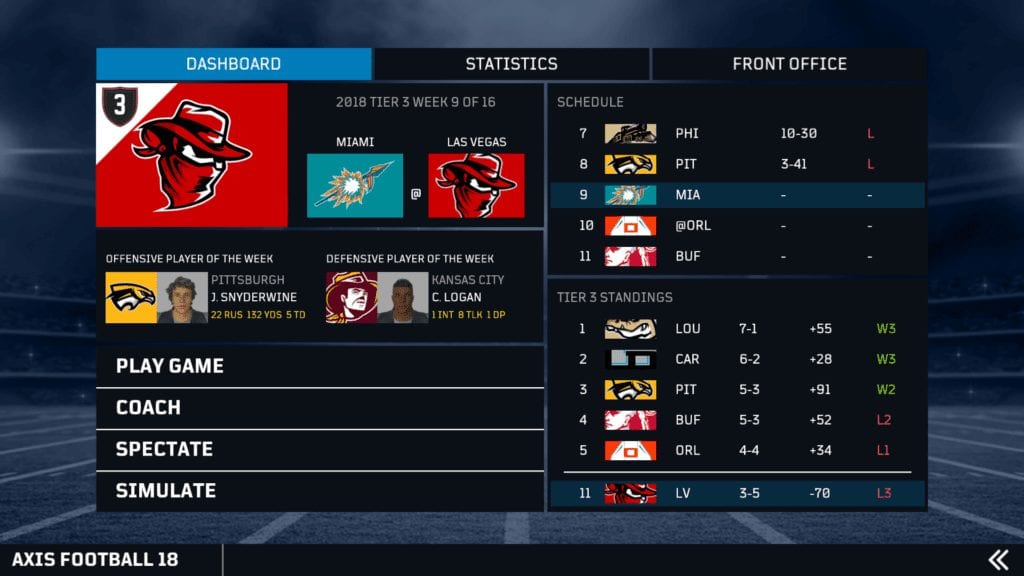 Now just because you start off as a tier 3 team doesn’t mean you’re going to stay a tier 3 team. In a play out of Soccer playbooks, there are call ups and relegations. Players progress and regress in a fairly realistic fashion, team stats are accounted for over the course of the season, and you can draft for your future. Anything you want to do is here and it all works well thanks to a slick UI that keeps things simple and easy to use.

Keeping in mind that this is an Indie title, be prepared for a blast from the past in terms of graphics. The playing field looks good and there is a lot of static equipment on the sidelines, but crowds are sparse and the sidelines are fairly devoid of other players. Anti-aliasing is merely okay, and frame rates can be prone to stutter during things like kickoffs. 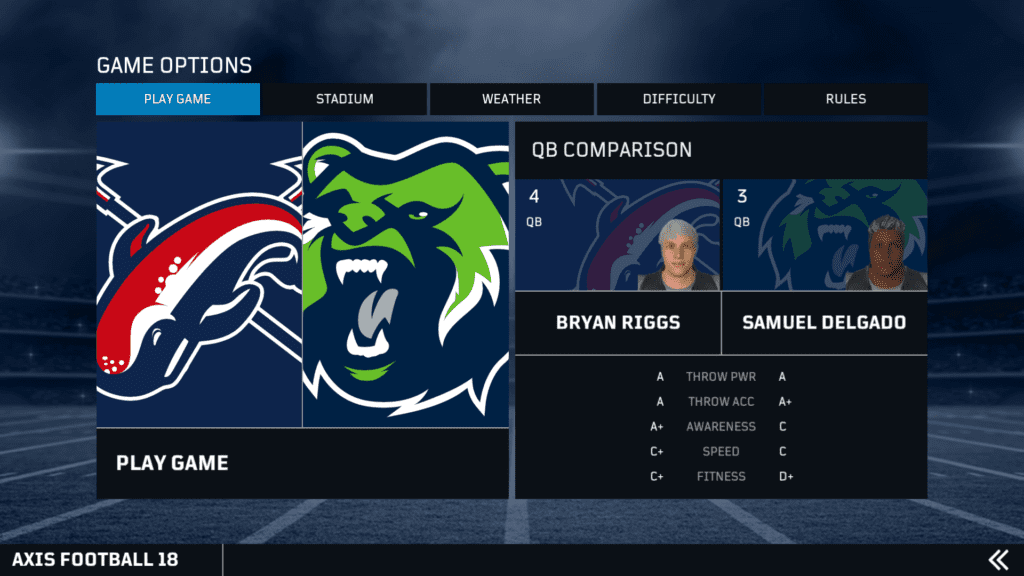 Player models are pretty good but are more reminiscent of last gen graphical fidelity. Mods definitely help the cause as everything from logos, crowds, and even cheerleaders can be customized to make things a little easier on the eyes. Player portraits can be changed as well and that’s good since most players are indistinguishable from others besides a few different skin tone variations.

Commentary is also a mixed bag. While it’s present in the game, it’s also very mechanical and tinny. Vocal inflections are all over the board as it seems to have been pieced together. That being said, there aren’t any blatant errors and color man Mike Steel will throw in the occasional pearl of wisdom. Dan Stevens will keep you informed of down and distance but I found myself turning it off after a few games.

Play art and hot routes are present and does a good job of showing you what is going on during the game. There are some interesting choices in terms of where the penalty pop ups are and when an injury happens, the pop up to show you who got hurt is easily misable as the window is small and tucked at the very bottom of the screen.

By no means is Axis Football ‘18 a competitor to Madden. What it is, is a competent playing game of football and a really fun franchise sim. Considering that the small dev team at Axis Games had a tiny budget and is selling the game at a fair price, that’s perfectly okay. In fact, this game is very reminiscent of early NFL 2k games and for some, that should be more than enough to give it a shot.

When accounting for how deep the franchise mode is and the fact that mods will allow you to customize anything your heart desires, anyone who wants an alternative football game could do far worse than giving Axis Football ‘18 a look.