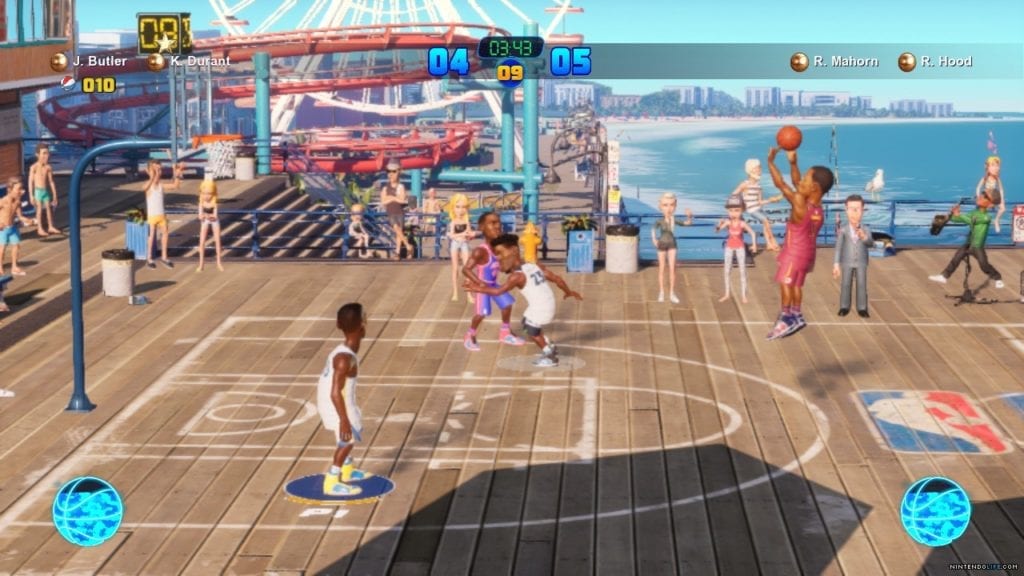 NBA Playgrounds 2 has three monumental appeal factors on the Nintendo Switch: there’s no other game on the Switch like it, it is a modernized realization one of the most popular sports video games of all-time, and it has an enticing backing from 2K Sports that suggests that it is much more polished than its predecessor. But while the 2-on-2 street basketball formula pretty much always lends itself to some fun local multiplayer, Playgrounds 2 falls short just about everywhere else.

The idea of creating your own team from the entire roster, a perennial wish for NBA Jam, is a welcome change right off the bat. Some legend combinations are tantalizing. Defense is pretty fun as well, especially when an opponent goes in for a slow-motion dunk and you time the block just right. Assigning “Push” to a single button instead of the NBA Jam Turbo+Steal feels great and gives players more control. It is a very welcome addition that, frankly, should not have taken this genre this long to implement.

However, the gameplay gets stale fairly quickly. Every arena feels like the one before it. Routinely missing 80 percent accurate shots is frustrating, but not as frustrating as missing wide-open dunks or layups when no one is around and the shot meter finishes in the green. Offense is a bland and repeated pattern of crossover, sprint, dunk/layup to get quick and easy points. And if it doesn’t work the first time, pass it back and forth and try it again.

Despite occasional bright moments, the game feels like an endless grind more than anything else. Before players get into their first game, they  will encounter a screen explaining the two separate types of in-game currency. For those unaware, player acquisition comes in one of three ways: getting lucky via opening a pack with them in it, buying them outright with in-game or paid currency, or paying to unlock all players at the start. Even exhibition games can only be played with players you already own, which is an incredibly surprising design choice that immediately puts off otherwise excited newcomers.

Even the 2010 NBA Jam reboot did this well, with tons of bizarre unlockable characters and legends on top of all of the base players in the game. But it feels much different when you have to not only grind for players, but also grind for the unlocked players to actually have stats that live up to their reputations. Sure, I got Wes Unseld and Dave DeBusschere in my introductory packs, but their middling statistics make them feel as valuable as some of the lowest ranked base players. It really should be one or the other: let players build up and grind for their custom teams or make the unlocks feel like real worthwhile rewards.

Here’s an example. Season mode (not an actual full season, just 15 games) is specific to a certain team to unlock a certain legend. So one would have to play as say, the Orlando Magic to unlock Legendary Tracy McGrady. But if you do not own any Magic players, the game will “gift” you two of the lowest-ranked players (Aaron Gordon and Nikola Vucevic). Teams are manageable with the duo, who level up to their “Silver” and “Gold” levels (their full potential) over time, but I will never play with either player again after finishing this season. It all feels like a real waste of time given the immense grind for anything in the game, but I find myself hovering over the “Unlock All Players” purchase in-between games. So maybe it’s working.

While this can be fun if you covet a certain unlockable legend, the idea of forcing players to go through 15 three-minute games per 30 teams feels a lot less like an engaging and repeatable season mode, and a lot more like another way to force the “Unlock All Players” microtransaction. The lack of customization (you can only play three-minute games) further hinders an already shallow experience.

At the end of the day, what’s another $10 to unlock everything? They’re not asking, say, $30, and players can easily warrant the purchase once they calculate the time they would have to spend on unlocking everyone. But pricing the unlock as 30 percent of the game’s cost elevates the full cost to $40 on a game that frankly is worth much less than that. I appreciate taking the NBA Jam formula on-the-go and am optimistic that NBA Playgrounds 2 will grow on me, but I wish I had waited for the price drop instead.

NBA Playgrounds 2, Scheduled to Launch on May 22, Has Been Delayed