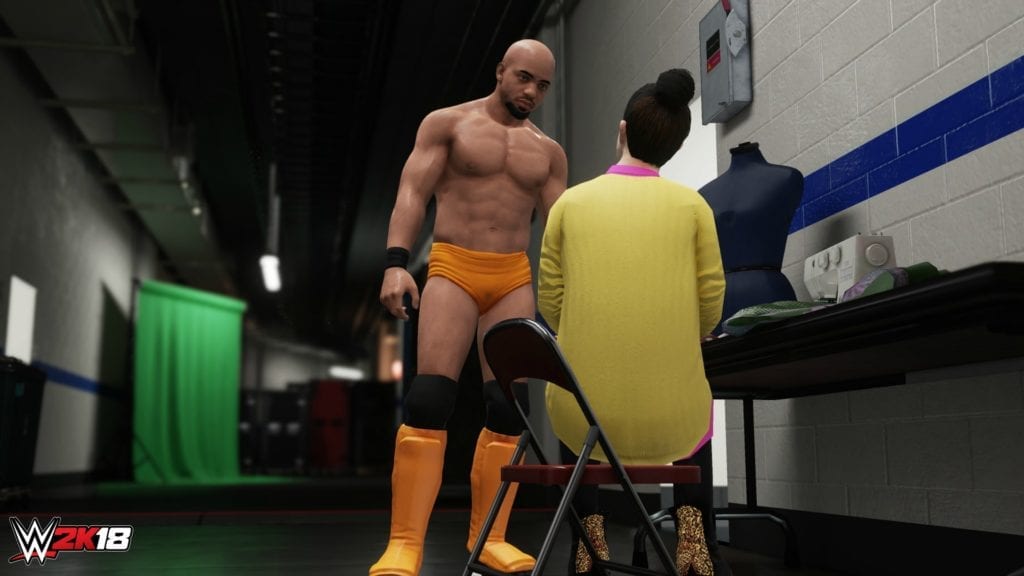 The goal every year for MyCAREER in WWE 2K is enabling our fans to live out their dreams as WWE Superstars. This is no easy task, as everyone has a different vision for his or her WWE Superstar. We pay close attention to this vision, and at the end of each WWE 2K iteration, we take a long and hard look at what our fans want in future MyCAREER offerings. The two things that stood out most to us following WWE 2K17 were the lack of free-roaming backstage and a shift back to telling a compelling story through self-created WWE Superstars (also known by fans as MyPLAYERs. So for us, those were the goals this year. In WWE 2K18, we wanted MyCAREER to focus on a strong story narrative. We felt the addition of backstage could afford us some cool new ways to experience a day in the life of a WWE Superstar. For us to accomplish this, we needed to develop unique and compelling storylines that are no longer shared from Universe Mode so the journeys that MyPLAYERs go through are unique and fresh.

In short, it’s ultimately your choice how your MyPLAYER’s road to WrestleMania will unfold. We definitely put a bunch of twists and turns to make it feel like it’s your own story, and we hope you’ll be surprised by a few of the WWE Superstars and events that will pop up along the way!

This is something fans have wanted for a while, and it’s something we have wanted to do for a while as well. With a MyCAREER laced with storylines that involve both in-ring and out-of-ring action, it made sense to bring a free-roaming backstage into MyCAREER.

We wanted MyCAREER to be experiential this year. We wanted players to spend more time interacting with WWE Superstars and supporting personnel to better experience all their unique personalities. Rather than looking at menus to determine who you should align with or who you want to make your rival, you can simply go talk to them or ambush them backstage. Want an interview with Renee Young? Simply go up to her and ask for an interview. Don’t like the WWE Superstar she’s interviewing? Go up to him during live TV and interrupt that interview.

There will be no shortage of personalities backstage, from WWE Superstars and Legends to GMs, apparel tailors and more. Sometimes the interactions will also present side quests that are separate from the main storylines. Think of them as mini-stories that aren’t as involved or crucial to your Road to WrestleMania. For example, some WWE Superstars might ask you to ambush a rival or go toe to toe with them in a promo. Last year, we added promos to MyCAREER for the first time. While we were happy to finally let players get on the microphone, we knew we could deliver more in the second year of designing the promo feature in WWE 2K18. The two clear improvements we set out to accomplish were making WWE Superstars feel more like themselves and improving the scoring system, as it constricted players from telling the promos they wanted to tell.

It was clear that some of the more unique WWE Superstars needed to be represented better when cutting a promo in MyCAREER. WWE Superstars like Undertaker and Enzo Amore come to mind when discussing this. We created nearly 200 new animations – spread across multiple WWE Superstars – to make them feel more like themselves while on the microphone. You’ll notice Shinsuke Nakamura moving in that unique way that he does while talking. Bray Wyatt will fidget maniacally while preaching on the microphone. The New Day will dance their way to the ring instead of walking. We wanted promos against these WWE Superstars with unique personalities to feel very special. We wanted your MyPLAYER to really feel like you’re going face to face with them in a battle of words.

One of the more fun components of promos was the combo system, so we looked to shift scoring to focus on that rather than trying to find the best fan favorite or bad guy answer. Last year’s scoring model was very rigid and made players feel like they had to make choices they didn’t want to make in order to get high marks. This year, rather than trying to score the highest value, we wanted to score players on promo cohesion. This means as a player, you’ll be able to pick the point you want to make while on the mic. After making that point, you’ll be scored based on how well you stick to that point. You no longer have to worry about if this is what you should say as a crowd favorite or a bad guy. Promo this year is about saying what you want to say and sticking to your word.

With the addition of free-roaming backstage, naturally we started thinking about the possibilities for MyCAREER invasion. Just like last year, your friends’ MyPLAYERs can populate your MyCAREER save. However, this year, you’ll actually see them backstage. They act just like any WWE Superstars you’ll see backstage: you can talk to them, pick them up as tag partners, get side quests involving them and even ambush them. It’s up to you what role your friends’ MyPLAYERs will have in your MyCAREER.

In closing, we are looking forward to letting you try out all this new stuff in this year’s version of MyCAREER in WWE 2K18. A lot of hard work went into making this year’s MyCAREER feel different from previous iterations, and we hope you all enjoy it!