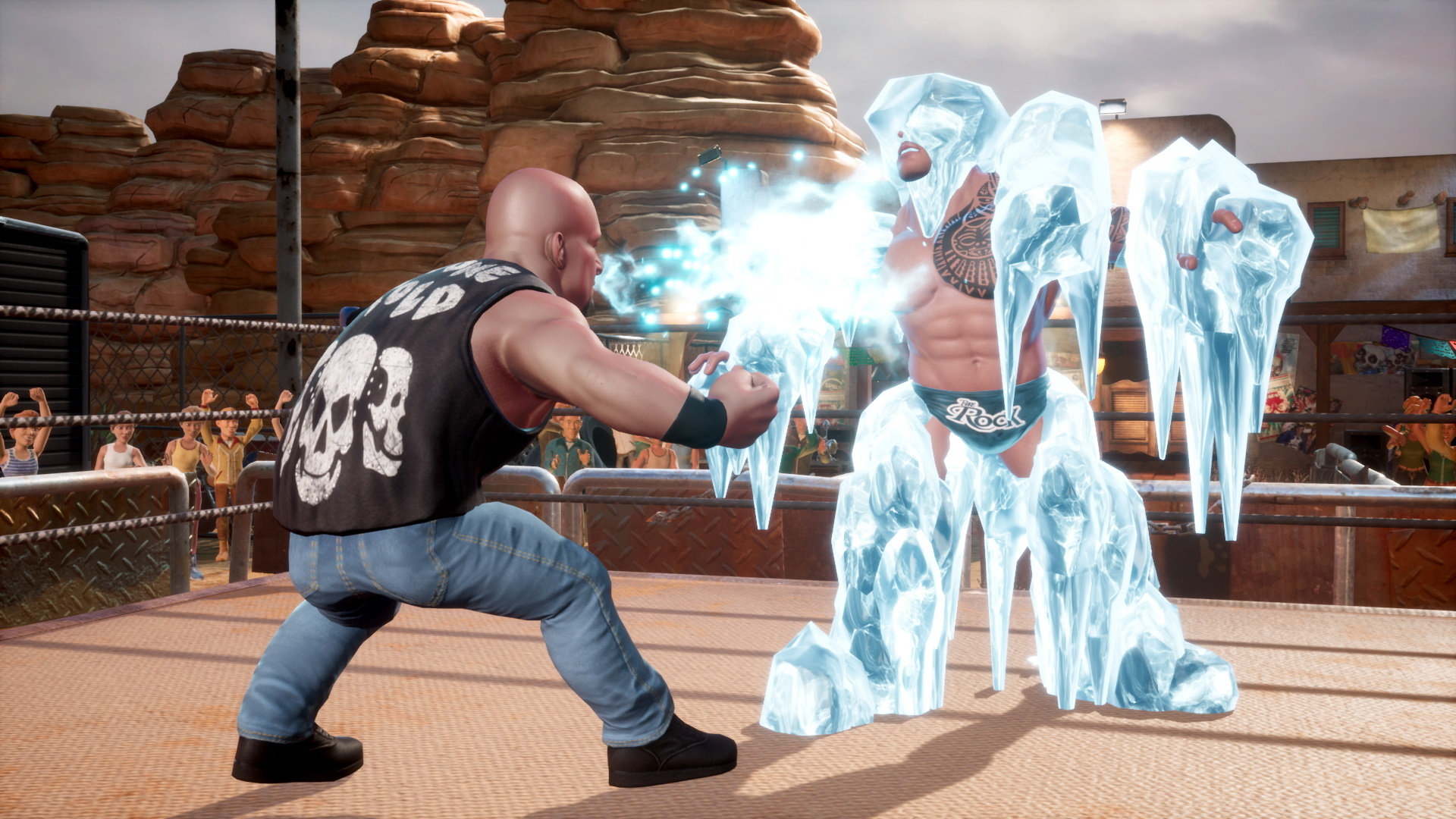 A lot of the actual wrestling maneuvers in this game are very well animated. I’m not even necessarily talking about the over-the-top, 20-foot-high RKOs. I’m really talking more about the actual suplexes, DDTs and other more “basic” maneuvers. Some of those animations look better than what WWE 2K has offered. I was pleasantly surprised to see this.

And to be honest, some of the crazy moves themselves are fun to do and see. The specials and finishers are highly stylized, like Orton’s RKO takes his opponent very high up before crashing to the mat. However, one thing I wish the developers had done with finishing moves such as the RKO, spear or super kick is have your character automatically go into a pinfall attempt.

Also, while maybe it’s a little odd to say, I love mashing the A/X button to recover after the CPU does a move on you. I don’t know how many times I’ve smashed buttons to get my character up from the mat in WWE 2K games. (Hint, it does nothing.) I really enjoy having the control over that.

Moving on from the basic controls, there are then advanced controls. Again, they aren’t very hard to use or memorize. Power-up tiers are simply pressing the different directions on the directional pad. Grabbing a weapon from under the ring is simply A. And finally, the special movies are hold LT and press one of the face buttons. This does vary by class. 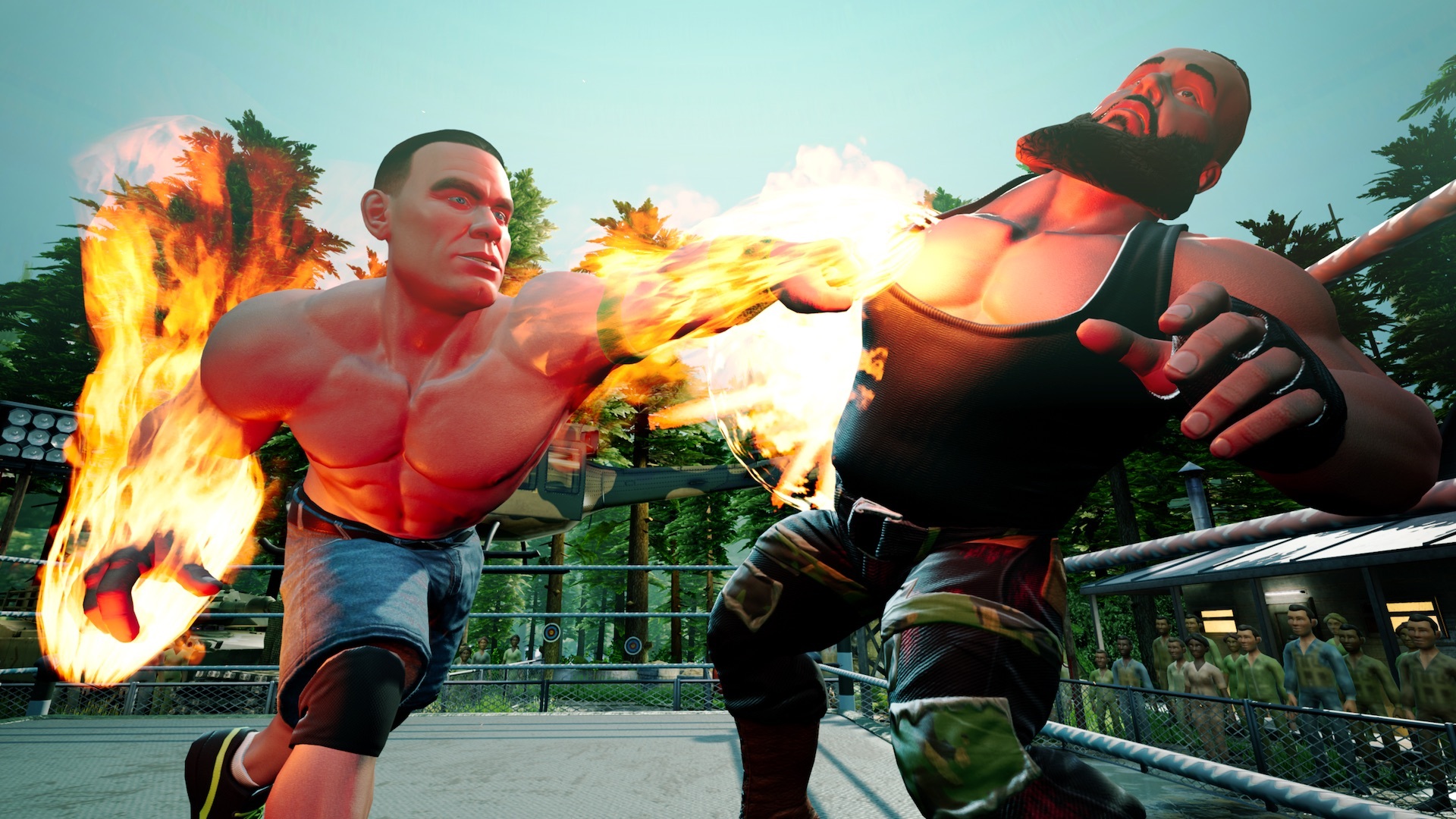 As for the classes, you have five styles: Powerhouse, Brawler, Technician, High-Flyer and All-Rounder. Each class has a set of moves they can pull off with more effectiveness based on that class. This gives you a lot of options for moves and makes wrestlers feel different. There are many controls for each class, but this review would be five pages long if I listed all of them. You can easily find the control schemes in-game.

Yep, for real. King and Mauro Ranallo are fun to listen to. I am a huge Mauro Ranallo fan to begin with so I might be a little biased. I’m sad he’s gone from WWE. Of course, there are going to be repetitive lines and phases, but it just sounds more natural than past games. Mauro’s signature excitable announcing is definitely fun for me and fits here. It also makes me wish the next WWE 2K game would have him as one of the announcers, but I doubt that happens since he’s no longer with the company.

The Roster Out Of The Box

Honestly, 2K should get a big strike here when it comes to the roster. When you boot up the game and jump into a play now mode, I was shocked to see the small amount of unlocked wrestlers. There are only 13 men and 8 women. I find this to be unacceptable, especially when some of them are Bobby Roode, Akira Tozawa and Yokozuna. 2K has boasted a huge roster for this game, and it is there, but only if you’re willing to grind for it or pay for it.

I get that you should have to unlock certain wrestlers, but only having 22 wrestlers in total out of the box is not a good look. That’s really all there is to say about it. There are also only seven stock arenas in the game. The environments are kooky and some downright hilarious, but that’s why we need more of them.

I won’t get into create-a-wrestler much, but I’ll simply say the same logic applies here. The CAW is not as deep as a regular WWE 2K game, and you have to unlock a lot of goodies to even make it resemble something close to a normal 2K game’s depth.

In short, the gameplay in this game will probably be very subjective (which is normal). But for me, I feel like there is too much going on during matches — the screen is too busy.

While the art style hits what it’s going for here, the problem is the on-screen look of the game as you play. You are inundated with different colors flashing all over the place. From fire to green and blue flashes for different things like big moves, it’s almost too distracting for me to play. It’s busy and almost a form of stimulation overload. 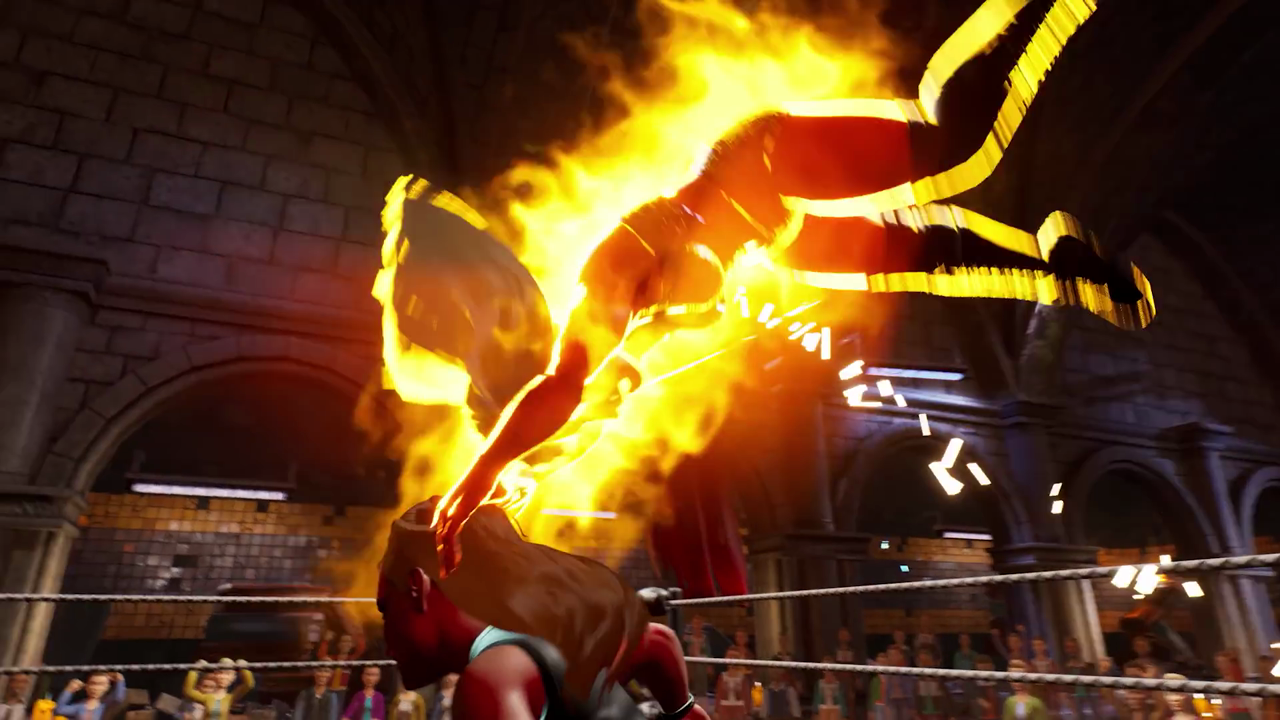 This, of course, could just be me because I am somewhat sensitive to light and colors flashing. I have to wear sunglasses on a cloudy day, so what do I know. But at the end of the day, I can also see why people would enjoy this sort of look, especially kids. It’s basically a button masher with only a few specific things you have to do in order to make something happen, and so it makes sense to really try to spice things up with lots of visual stimulation. 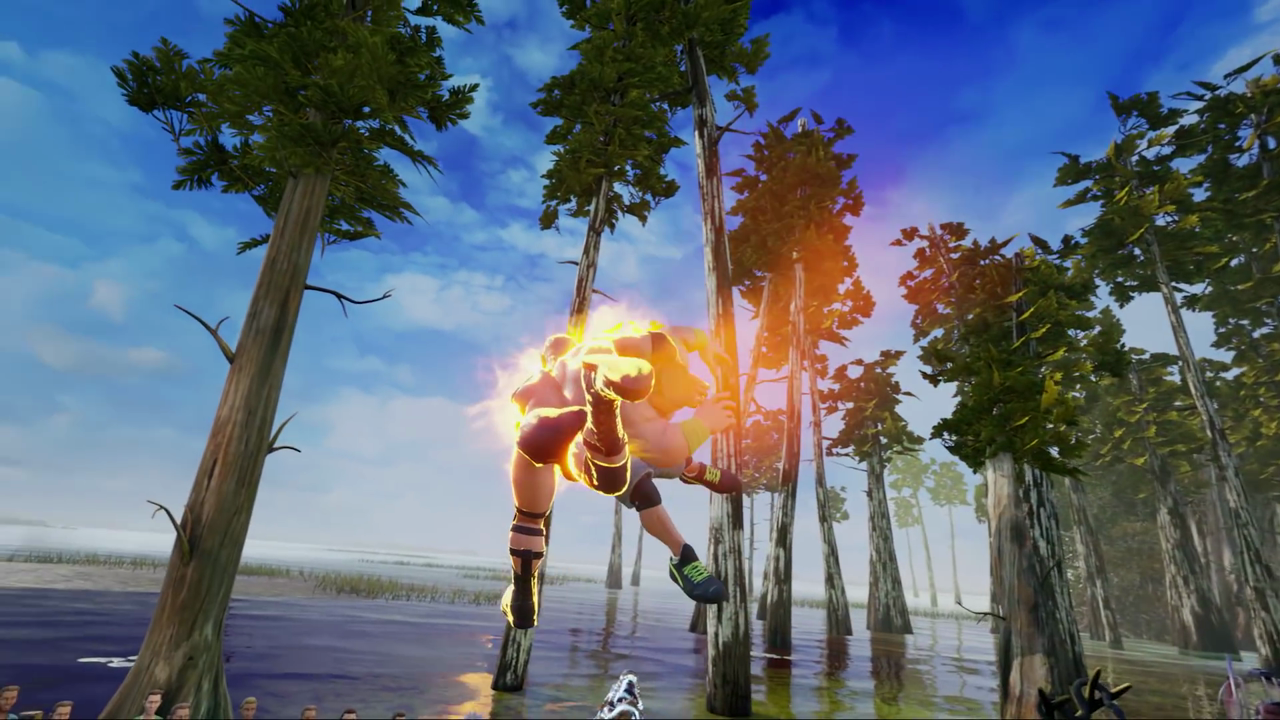 The caveat here is that it’s almost a given nowadays that a game is going have issues with online gameplay in its first week or two after release. Battlegrounds is no different. I had a hard time even getting to the point where I could get into a match. When I finally did, I lost connection to the server a couple times. And as I suspected, once I was able to play a match, my opponent did nothing but spam punches and kicks. (But obviously that aspect is not 2K’s fault.)

I think the game is geared to the younger crowd, which is fine. Like I said, I can see kids liking this game quite a bit. I also don’t see any immediate issues that need to be patched — except maybe a gameplay exploit or two that crops up in online games. Oh, and the silhouette of Tessa Blanchard in the Royal Rumble tutorial, which has been patched.

So would I recommend this game? Well, it depends what you want out of a WWE game. This would probably be a really fun game for a parent to play with their young son or daughter. I also think it could be a fun budget title if you just want a party game to trot out with some wrestling buddies. Overall, it’s not a bad game, but it doesn’t feel as special as something like WWE All-Stars either.