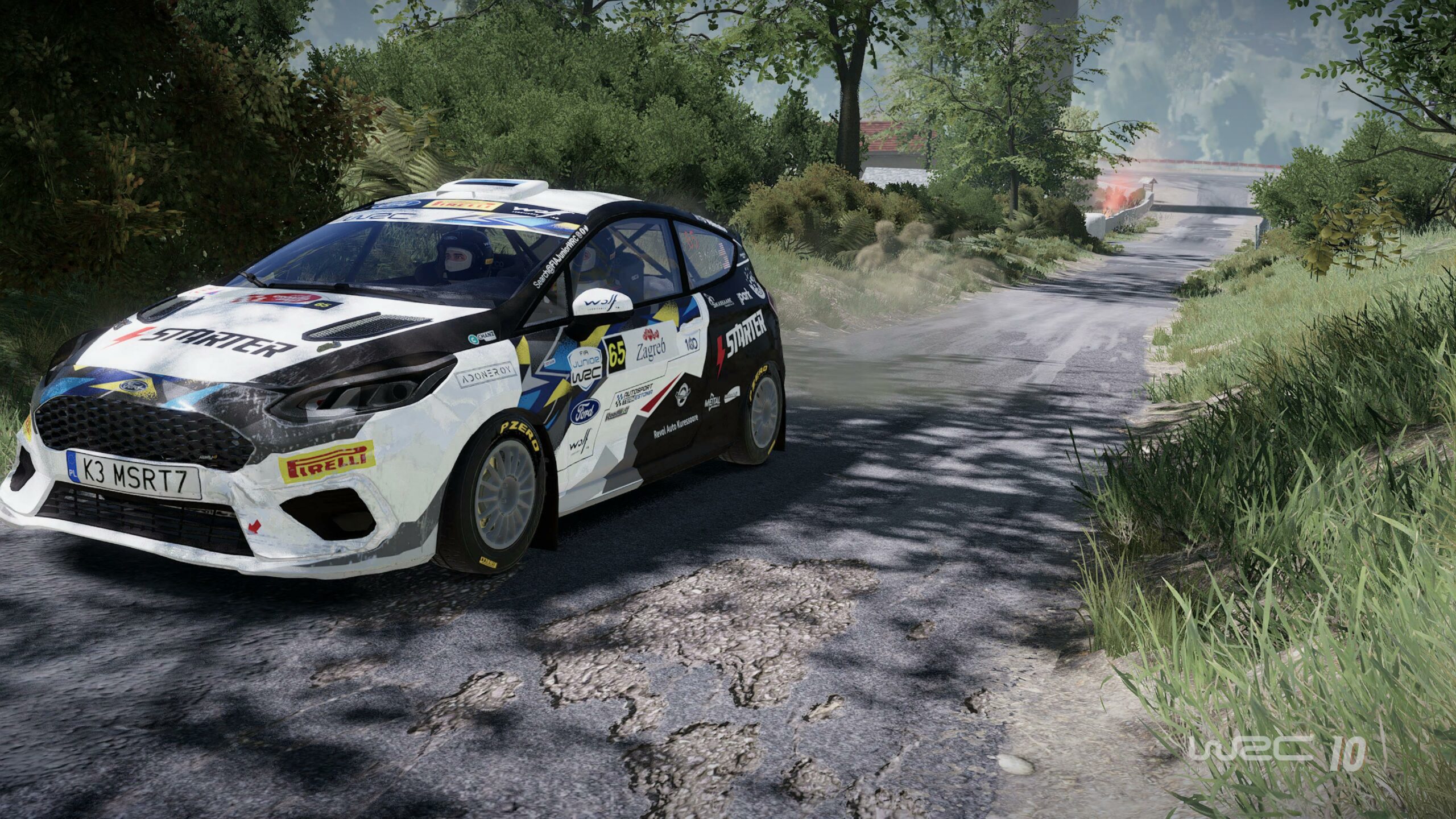 If you played WRC 9, the career mode in this release will feel extremely comfortable, if not overly familiar. Still, the career mode provided by Kylotonn in WRC 10 is a fun ride that provides real depth and player involvement.

WRC 10 gave me the option to start in the lower levels and earn my way up the ladder via results on the track and in the facility. Basic equipment is provided, and a skeleton of a staff is in place to help assist you in the journey in your climb to the top. What I love about the career path is it is methodical in the sense that there is no way to proverbially “cheat the system.” Meaning I had to perform well in practice, in special events, and in the designated rallies to move forward and be noticed by sponsors and manufacturers.

It’s not all about performance, as you will need a bit of business acumen to help add talent to your staff in the form of mechanics, engineers, meteorologists — plus help bolster the research and development department. 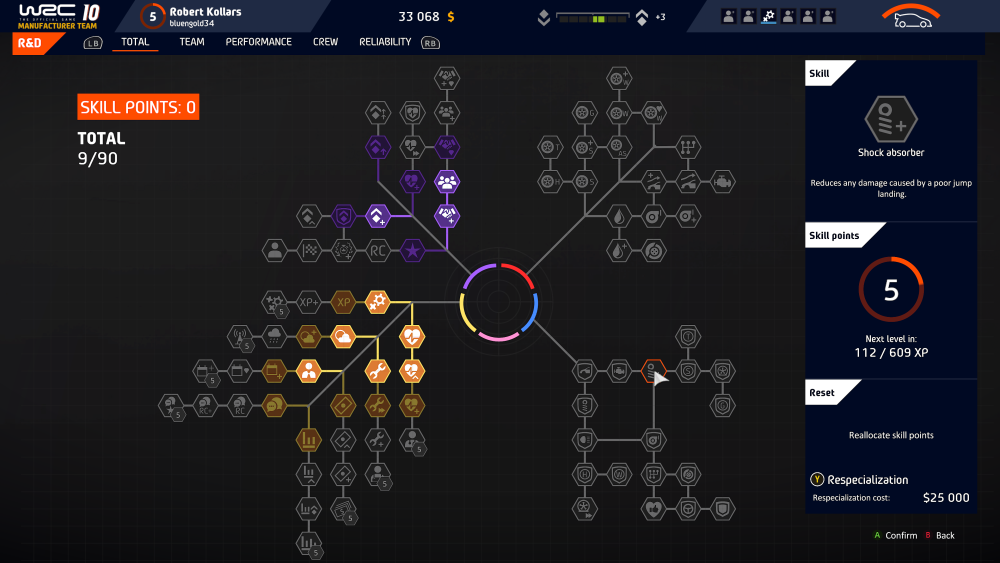 You earn XP and career points during rallies, events, and training, and XP and points can be utilized to help bolster your staff and flesh out research and development. The combination of on-track performance and running a team internally provides a wonderful sense of depth and ownership, and it all had me gravitating towards this mode often. 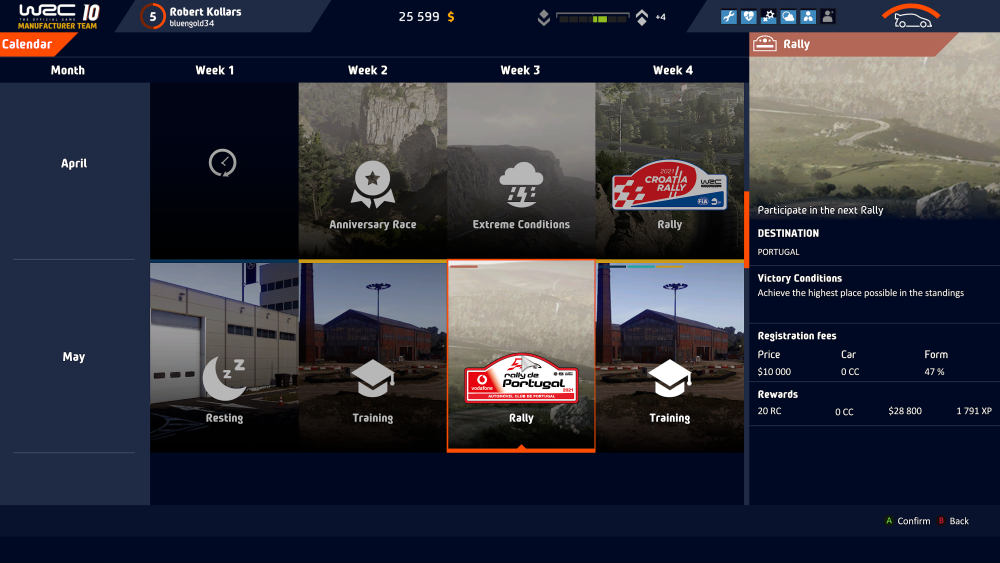 For those who tend to stay away from online modes and are concerned about enough depth for offline-only players, career mode negates that concern at a high level and is worth the price of admission on its own merits.

A large majority of the community has been asking for this and Kylotonn has finally delivered a livery creator. That is the exciting part, but as with most things there are two sides to every story, and that applies here as well. 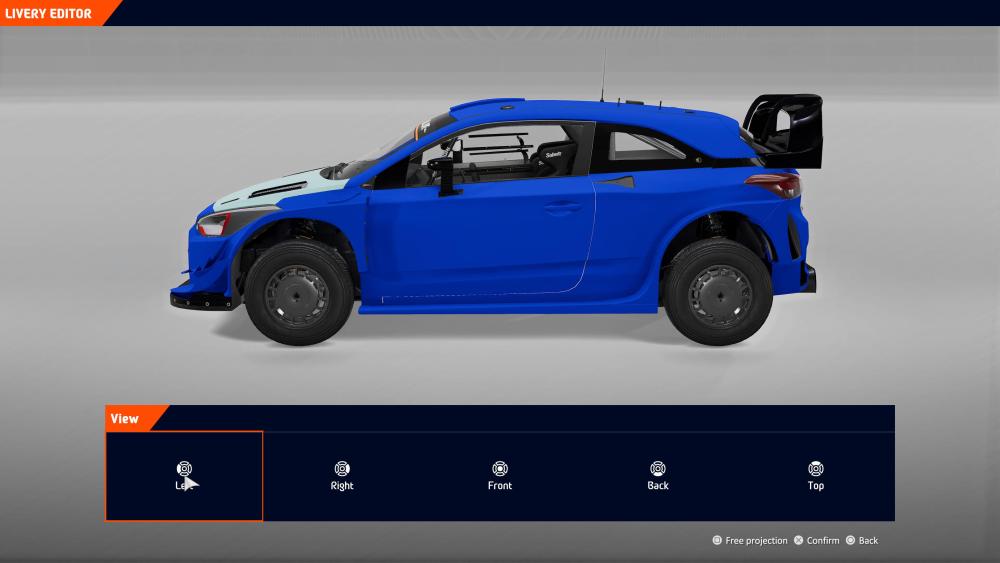 While having the option to create your own livery is exciting, the system itself does feel a bit basic, and trust me when I say there is nothing here that hasn’t been done before. In fact, much more has been done in other games, but as I said before, it’s a start.

If you have ever used Turn 10’s Forza livery creator, then you will feel right at home with what WRC provides (but again it’s a bit more basic). A large contingency of items are unlocked and ready to be used to create shapes, stickers, paint schemes, and more. Some items are locked though, and those items can be unlocked and implemented into your creative arsenal by the way of certain in-game achievements. 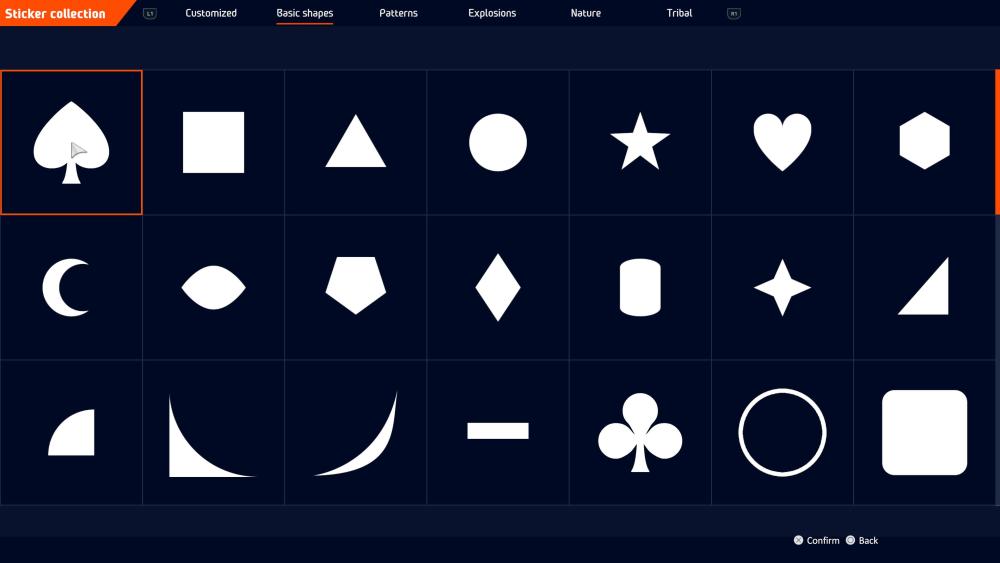 I spent a solid hour with the creator to get a true understanding of how it works, and within that time I was able to figure out every single facet of the program and how to merge it together. As a whole, the livery creator is a simple mechanic to pick up initially and will cater well to the creative masses who delve into the program.

The goal of developer Kylotonn was to pay homage to the history with a retrospective mode that allows one to relive some of the best moments, best cars, and best venues in the history of the sport. The effort has paid off.

The WRC 50 mode let me take on up to 19 different events from the storied history of this sport with a difficulty that covered the whole spectrum. I found myself enjoying some aspects and events much more than others, but to be fair, that is to be expected in a mode like this. 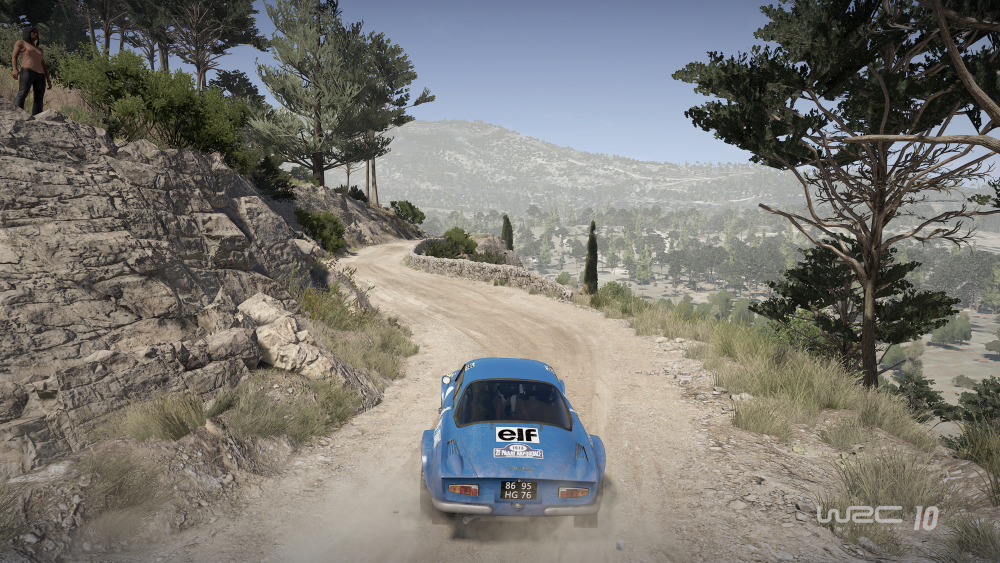 The history of the sport is something that I had to research as I am somewhat naïve to it, so to have the chance to relive some of these events from the past was quite exciting. Although at times, as I mentioned, it was extremely difficult. Also, some of the perks and unlocks are segmented for this mode, so players on the PS5, Xbox Series X, and PC might participate and unlock certain perks and items that are different than their counterparts.

The bottom line here is that the WRC 50 mode while challenging offers an incredibly cool opportunity to participate in the history of the sport in a way that few games have offered, and does so in a well-packaged mode that offers a high level of replay factor and challenge.

Been There, Done That

My only real major concern with WRC 10 is the fact that except for the WRC 50 mode and livery editor there isn’t a lot that will feel like more than incremental improvements. Now, the game already provided a lot of depth and replay value in previous iterations, but those who are familiar with the series may feel a bit slighted, especially if the history of the sport and creating their own car liveries aren’t things that necessarily excite you. 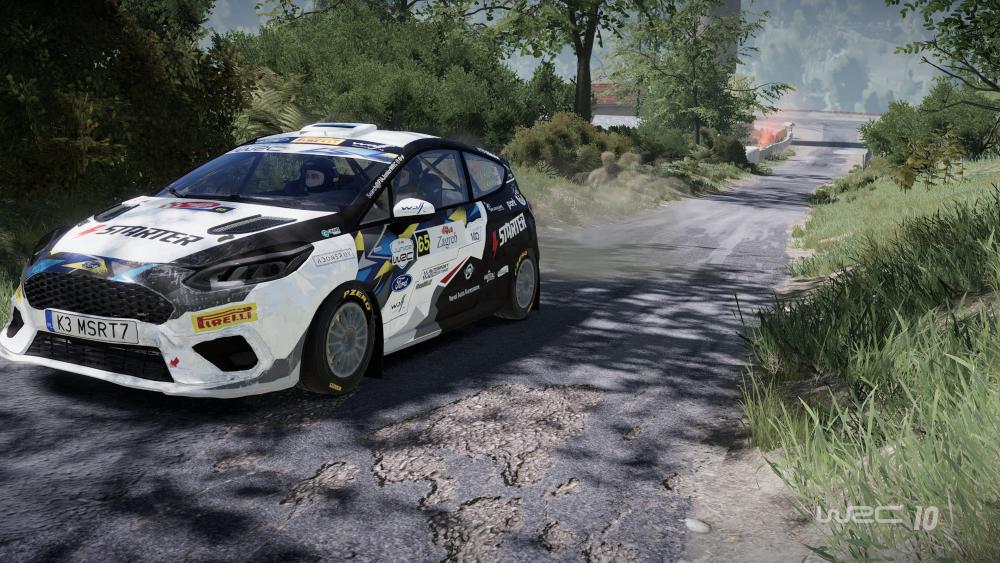 I love career mode in WRC 10, but when not on track the presentation boils down to a voice-over and a repetitive series of point and clicks and additions to the calendar. The mode is deep and offers a lot of longevity, but as with last year’s career mode, it could stand to provide some deeper interactions and options that create a bit more involvement for the player. 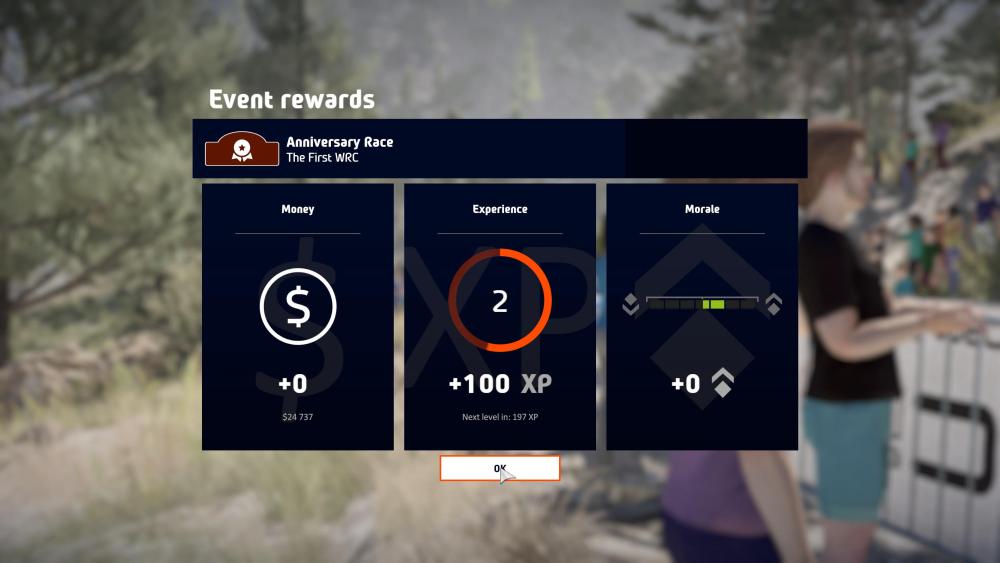 It’s not that I expect racing title career modes to edge up to the standard that is set in a series like F1, but for those who have experienced that type of deep and involved career mode, what’s provided in WRC 10 off the track may become a bit repetitive after a short period of time.

Most would consider a rally title to be a niche product, and in some sense, they would be correct. WRC 10 is not an easy title to pick up and learn, and even harder to master and feel in control of, but for me, that is a huge part of its charm.

WRC 10 falls somewhere between Dirt 5 and Dirt Rally 2.0 but leaning closer to Dirt Rally. For those who are looking for something less arcade but with some flexibility, WRC 10 will fall right into your wheelhouse — and with the ability to alter the level of difficulty along the way. That’s not to say that WRC 10 carries a strong sim-cade vibe to it either because it most certainly screams simulation at you. I just find that WRC 10 caters a bit more to the casual fan and can be a little more accessible than Dirt Rally 2.0.

That said, this title will challenge your patience and requires time and effort to learn the game from the inside out. Those who are willing to do just that will have an experience that is deep, authentic, and most of all, fun. There are no cheap ways to enjoy WRC 10, and you are either all in or you’re not, but the rewards for those who jump in with both feet are, well, rewarding.