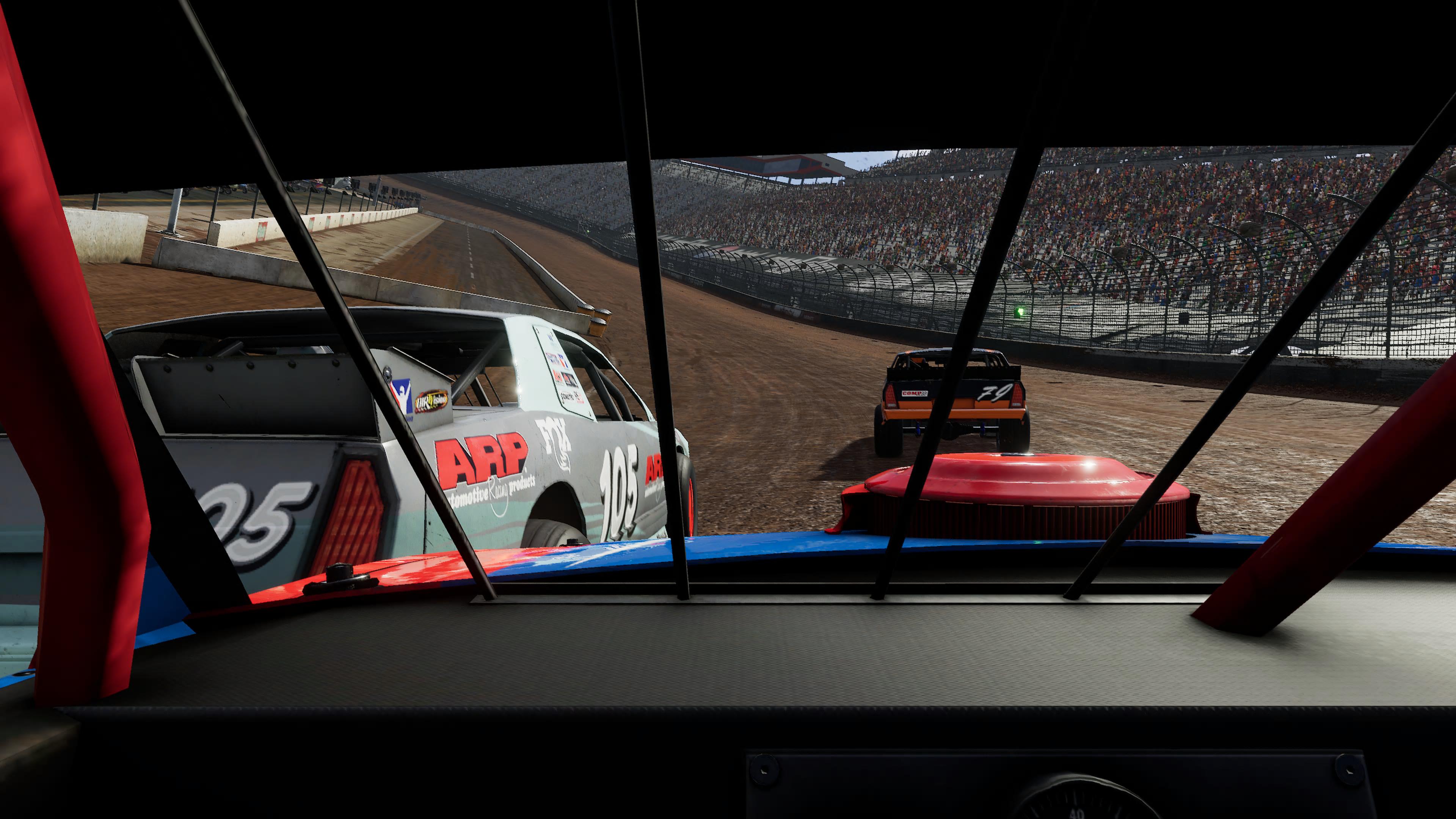 Monster Games has long been part of the backbone of racing games, dating back to NASCAR Dirt to Daytona and more currently with Tony Stewart’s All-American Racing and the official racing title of the SRX series. Things have changed since their last release as Monster was purchased by iRacing and is now partnered with them. This was a significant merger/partnership, especially for racing fans whose chosen platform is console rather than PC. How the merger ends up looking over the long haul is anybody’s guess, but this is the first look at the studio post-merger. With that in mind, let’s get into my World of Outlaws: Dirt Racing review.

Monster Games knows a thing or two about creating and delivering a racing experience that is a potent combination of realism and accessibility. They have struck gold again with World of Outlaws: Dirt Racing, in part due to the help of the fine people over at iRacing. From the minute you hit the track in WoO, you can feel the iRacing integration, and while not at the level of the popular subscription sim, the improvements in the driving model are noticeable.

The game’s official page claims, “The new title takes the established Monster Games platform to a new level, with the addition of car and track models, sounds, and multiplayer technology from iRacing to elevate the authenticity and gameplay experience. All-new physics, also tuned by iRacing.”

I usually glance over these claims without a second thought, but what is said here is essential and rings true.

What’s the difference? In World of Outlaws: Dirt Racing, it feels as though the car is on actual dirt — dirt that has different textures and gripping ability. The difference was enough to grab my attention from the first second I hit the track in a pro stock car and realized what had worked for me in the past with the Tony Stewart and SRX titles had little to no impact on what World of Outlaws required from me.

Whether in the pro stocks, late-model, or sprint cars, the experiences were different in each vehicle yet delivered a high level of excitement and fun that required a focus and understanding of how the car interacts with the surface. I had as much fun just turning hot laps as I did racing against the AI simply because of the new racing and track physics.

This is where I spent most of my time. Career mode in World of Outlaws: Dirt Racing is a fun, authentic, and addicting experience. As mentioned above, you can feel the polish of iRacing in the driving model, which carries over into career mode.

Monster Games developers went with a tried-and-true method with career mode in WoO, and why not? It works and works well. You start as a newcomer in the world of dirt racing at the local level, racing at tracks in your local area and a few scattered around a bit further away. You have limited funds, staff, fans, and essential equipment. You are armed with only the hopes and dreams of moving up the ladder to the professional level, the World of Outlaws sprint cars.

You can choose to start in pro stock or sprints, with the ability to move up to winged sprints and late model and late-model pro. I chose pro stock as it reminded me so much of early to mid-80s NASCAR racing, which is some of my favorite racing ever. Hitting the track, you have a basic car with no sponsors and just the hopes of doing relatively well and earning a bit to reinvest into your car and team.

Each race is divided into hot laps, qualifying, dashes, and the main event. Taking these seriously as you progress through your career is essential because goals must be reached once a sponsor is obtained in each race mode. Reaching these goals provides monetary dividends, so take them seriously and complete them all.

Once you accomplish what you need to do on the local level, it’s time to move upwards for a regional opportunity and national from there. As I progressed, I had multiple choices on my path to choose from. Those choices included investing earnings back into the car by repairing it, upgrading the current parts, or improving it with more substantial and durable components.

Aside from the car, I also had to choose how to fill out my business team and garage crew. Every choice had real-time ramifications on my team performing on the track and off. I spoke about depth being an issue for some racing games, but thankfully World of Outlaws: Dirt Racing doesn’t have that issue, especially if you are a huge career mode fan like myself.

Once I established myself as a driver and a team, to do things right I took about two seasons in each level of competition to reach my goals and be financially stable enough to pursue another series. The game also allows you to hire drivers to drive for you in multiple series, so you can focus on just one series, but I loved jumping from pro stock to late models and back.

Each car in each series drives so differently that it keeps the game fun and exciting and offers different types of challenges with each new series. No matter what option you choose on your path, career mode in World of Outlaws: Dirt Racing is an addictive and deep journey, and it’s one that could keep my interest for months, if not longer.

Online Play Is Limited But Solid

When you launch online, you will be met with the option to join an existing lobby or create your own.

If you create a lobby, you can create a standard set of races that include only humans or a combination of human and AI opponents. You can also choose to make this lobby public or private and have a set of rules that those joining must adhere to. The game also lets you choose between fixed or open setups, flags, the number of opponents, and the level of damage.

If you have played any of the recent Tony Stewart titles or the newest SRX title, this will all seem very familiar. If you haven’t, it is easy to navigate and find the options you are looking for. In my short time online, the lobbies were a bit bare, but that is to be expected at first, especially for a game that didn’t do much to let people know it was coming so soon.

The servers were solid, and most of the time it felt like racing offline, which is all I want for an online experience. The bottom line for the online racing in World of Outlaws: Dirt Racing is that it doesn’t offer anything that hasn’t been done before, but what is there makes sense and works well.

As much as I love how tough the AI opponents raced me from sanctioned race series to sanctioned race series, there was one issue that was noticeable and consistent. That issue is that the AI drivers rarely made mistakes while racing against themselves. If I was involved with the AI, a skirmish was possible. If not, the AI would occasionally bump into each other and carry on progressing in the race.

I have an issue with that because I have been to multiple local race tracks to watch these events, which are as chaotic as they come. Opponents are shoving each other to gain position, cars spinning out, cars catching on fire, DNFs, fights, and more. While World of Outlaws does a great job of recreating the local, regional, and national venues as a whole, a patch to help adjust the field’s ability would help a lot in terms of immersion.

I have had a deep love for dirt racing titles ever since the days of NASCAR: Dirt to Daytona and Saturday Night Racing, and that love has never lessened. What Monster Games and iRacing have delivered here with World of Outlaws: Dirt Racing is an excellent addition to the long history of dirt racing games dating back to the late 1990s.

What elevates WoO is the solid career mode, excellent driving model, and online offerings. Online or off, the game offers an exciting track experience. Add in the career mode that is addicting, authentic, and deep, and that combination will have you playing the newest release from Monster Games for months after its official release. World of Outlaws: Dirt Racing is available now for PS4/PS5, Xbox One, and Xbox Series X/S for $49.99 (USD).