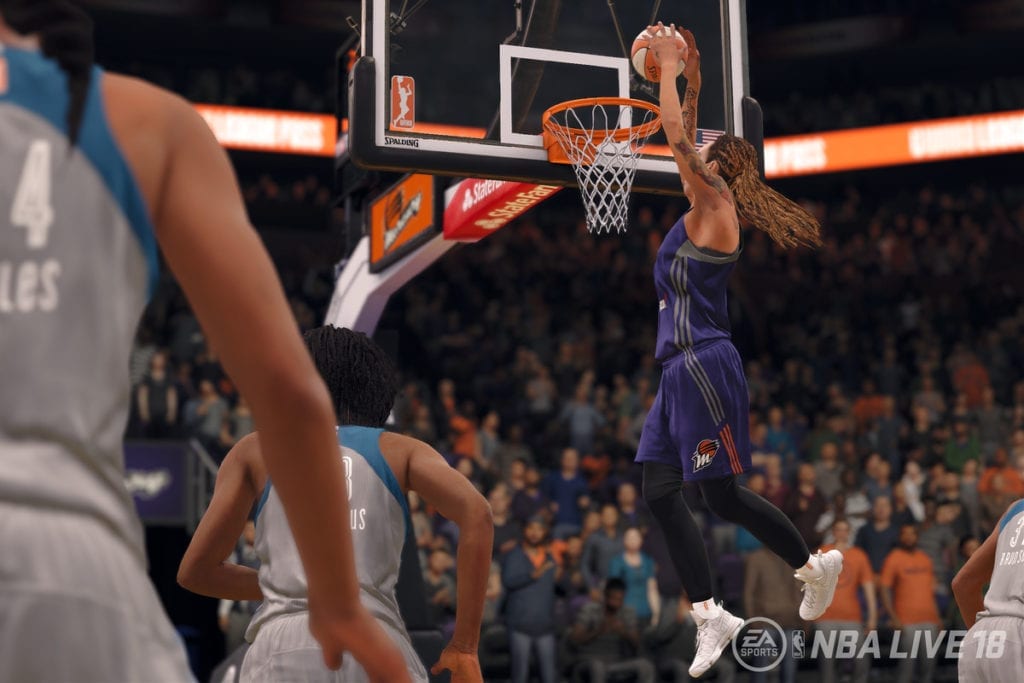 I could share my thoughts on why it’s important NBA Live 18 has decided to be the first basketball video game to include teams and players from the WNBA, but they shouldn’t really matter all that much. The fact that I’m another male writer trying to explain the significance of this tells you all that you really need to know.

It’s hardly any secret that since their advent, the assumption has been that video games have been predominantly played by men. The fact is, though, that more and more women these days are picking up controllers and identifying as gamers. An Entertainment Software Association report from last year found that 41 percent, or nearly half, of all gamers are female. But another report earlier this year by Nick Yee, co-founder of game analytics company Quantic Foundry, determined that just 2 percent of all sports video game players are women. This puts sports games at the very bottom of the list of genres that women enjoy playing.

Why is this? Clearly, there are plenty of women out there who enjoy playing and watching sports. The easiest explanation, of course, would be that women simply don’t see themselves being represented in many of the sports titles, especially when it comes to the big ones like baseball, football, hockey and basketball. This is why it makes sense for EA to want to rectify this glaring issue by bringing the WNBA into the fold with NBA Live 18, thereby allowing women to utilize players of their own sex for the first time.

While this can be viewed then as a shrewd move by EA to take a stab at catering to a neglected demographic, it’s also a bit of a gamble by both sides that sees them betting on each other. The NBA Live series has obviously floundered as of late, with EA opting to not even release a console game last year, so they are looking for any sort of advantage they can get over the more established NBA 2K series. On the other hand, the WNBA has always suffered from being in the shadow of the NBA and could use their inclusion in NBA Live 18 to raise their profile a bit. However, the danger for EA here is that the decision to include women could deter some of the more misogynistic basketball fans from buying the game, and for the WNBA there’s the inherent risk of partnering with the lesser basketball series.

There’s also the fact that even as EA announced plans to include the WNBA in NBA Live 18, it came with the caveat that you would only be able to play with its teams in the Play Now mode. This means that there will be no available option of starting a WNBA franchise (or a career with a woman player, for that matter) and taking your favorite team all the way to the finals. There’s no denying that this sends a bit of a mixed message that while the WNBA is considered prominent enough by EA to warrant inclusion in the game, it’s still not deemed important enough to have women be able to play any sort of meaningful games with long-term significance outside of an online play now arena.

I suppose it’s best to look at the partnership as something as a trial run (sort of like with the Women’s World Cup in FIFA), and only time will tell if it’s one that merits more exploration. Ideally, EA finds that there are so many women playing its game and enjoying the option of playing as women in the WNBA that the demand is great enough to see them releasing a standalone WNBA game. On a smaller scale, it would be wonderful even if this were to just serve as a gateway to women enjoying more sports games in general. Because as much as I like sharing my own opinions on this matter and all others related to sports gaming, it’s certainly a subject that’s sorely lacking a female perspective.

Editors Note: This article originally incorrectly stated you could not take WNBA teams online. We apologize for the error and have corrected our mistake.